China sends team to probe death of its ambassador in Israel

By Chris Pleasance and Joe Middleton For Mailonline

China is sending a team of investigators to probe the death of its ambassador to Israel who was found dead this weekend after just three months on the job.

Du Wei, 58, was found unresponsive in bed at his home in Tel Aviv on Sunday, having been appointed to the post in February. He was previously envoy to Ukraine.

China has said that Du ‘apparently died of natural causes’ but added that it is necessary to examine all possibilities.

While no official cause of death has been given, Israeli media said he appears to have died from a ‘cardiac incident’.

An investigations team was due to depart from China on Monday, according to sources who spoke to Haaretz.

They will help probe the cause of Du’s death, as well as handling embassy activities and arranging for the transport of his body, the paper said.

A representative for the family will be joining and will not be required to quarantine for 14 day, unlike all other international arrivals.

Israel’s Foreign Ministry Director General Yuval Rotem said that he spoke with China’s deputy ambassador Dai Yuming to express his condolences, and offered any help needed during the investigation.

Du is survived by a wife and son, who are not thought to be in Israel.

The ambassador’s death comes just two days after he condemned comments by visiting U.S. Secretary of State Mike Pompeo, who denounced Chinese investments in Israel and accused China of hiding information about the coronavirus outbreak.

In an interview with newspaper Haaretz, Wei said he his aim was to strengthen the ties between Israel and China. 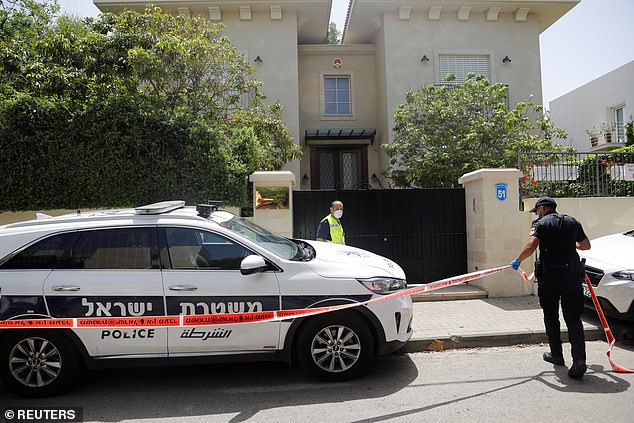 No official cause of death has been given, but Israel’s ambulance service has said it suspects a ‘cardiac incident’ while Du slept (pictured, his house in Tel Aviv)

He said: ‘China is a law-abiding, responsible country, and should be trusted. Different things have been said regarding China’s battle [against the coronavirus]. Initially, some were condescending and gloating.

When the disease broke out across the world, there were those who said that China has to apologize. They were looking for a scapegoat.

‘Throughout history, certain groups of people have been accused with spreading plagues more than once. It’s despicable and should be condemned.

The disease is the enemy of the entire mankind, and the world should fight it together.’

Wei also previously spoke about taking up the new role in the midst of a pandemic and how he had to enter quarantine for 14-days due to the outbreak.

He didn’t receive his diplomatic credentials until March and did not meet with the Israeli president to get them, which is normal procedure.