These images show the world’s largest cargo plane touching down in China as part of a 400-tonne medical supply run to Poland amid the COVID-19 pandemic in Europe.

The Antonov An-225 Mriya landed at Tianjin Binhai International Airport in North China late on Sunday (12th April), picking up roughly 250 tonnes of critical medical supplies in what is to be two round-trip journeys.

Mriya, or ‘Dream’, was contracted by the Polish government and landed in Warsaw today (14th April), carrying personal protective equipment including seven million surgical masks, as well as thousands of face shields and decontamination suits.

While some countries have praised China for its shipments of aid, others have warned that they could be part of its ‘mask diplomacy’ to repair its image, which has been harmed since the coronavirus crisis began.

The World’s largest plane, the Antonov An-225 Mriya, sits on the runway in Tianjin Binhai International Airport in North China late on Sunday as it prepares to be loaded with medical supplies headed for Warsaw, Poland 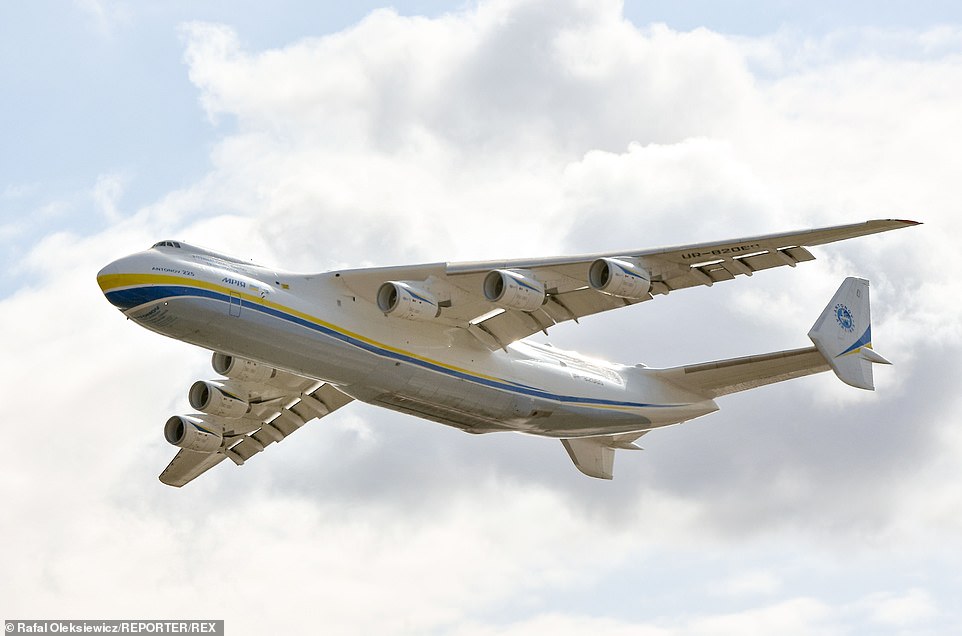 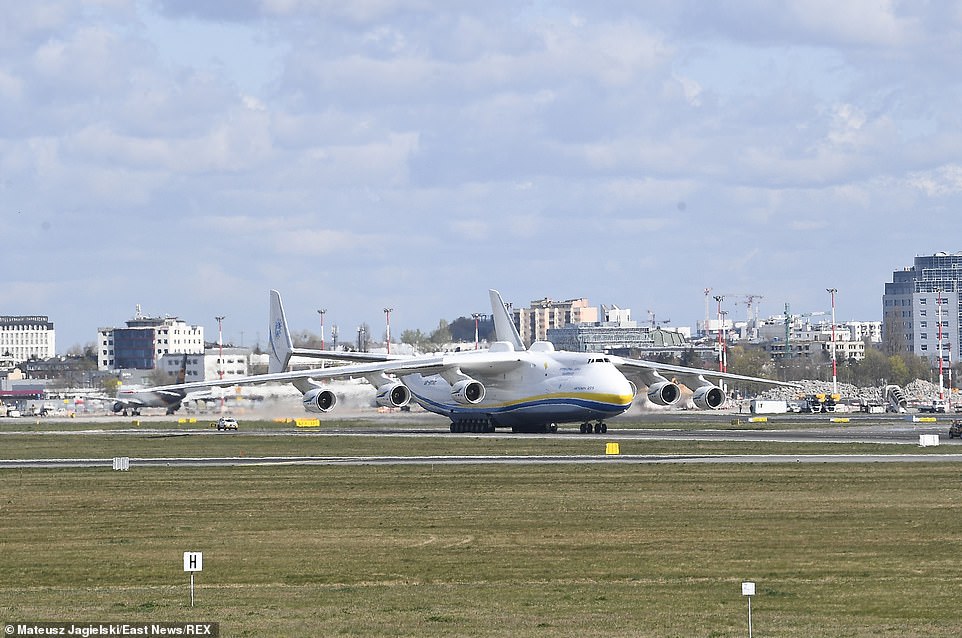 The plane, which has the longest wingspan of any plane in the world, was first designed in the 1980s to carry space equipment, including a space shuttle and rockets, for the Soviet Union 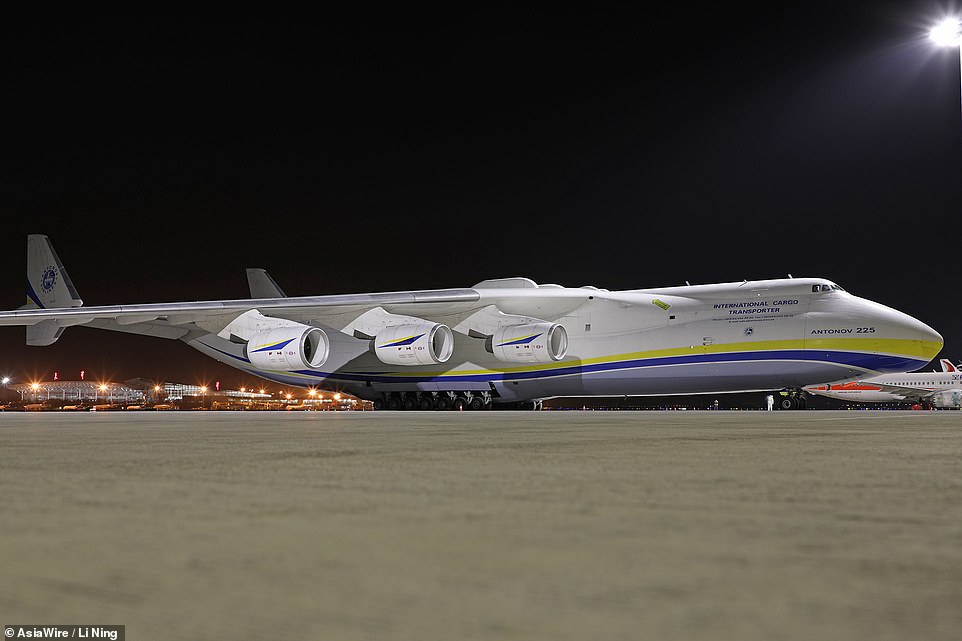 The plane, named ‘dream’ in Ukranian, is 84 meters long (275 ft 7 in), which is longer than the length of the first ever flight achieved by the Wright brothers in 1903

The Polish Ministry of State Assets reportedly said of the decision to hire the six-engine freighter: ‘With just one flight, the An-225 can bring as much cargo from China as 10 Boeing 787 Dreamliners.’

Despite Mriya’s record-setting 250-tonne cargo capacity, it will need to make a second trip to China in order to transport the full 400-tonne supply.

Chinese state media reported that Germany would also be employing the heavy-duty cargo aircraft – the only one of its kind in the world – for medical supplies from China, while contracts are believed to cost governments at least 1 million USD (800,000 GBP). 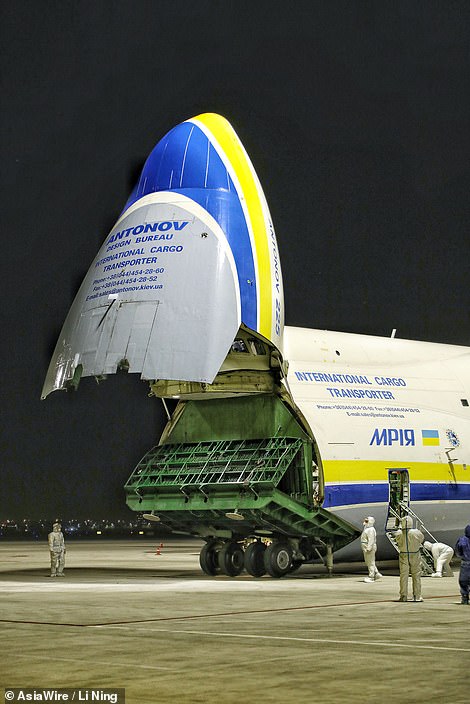 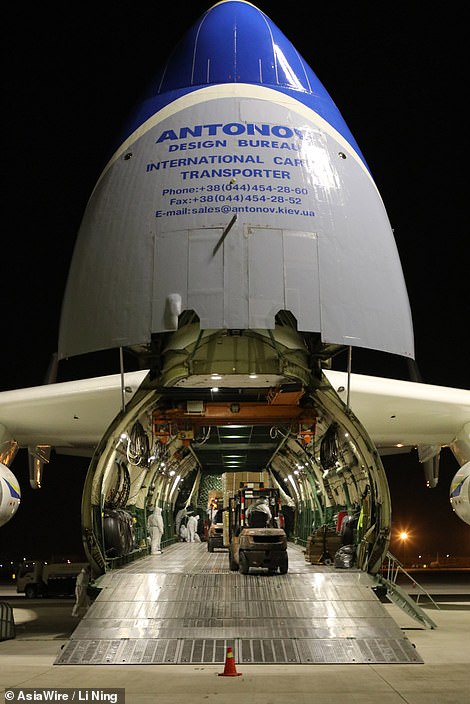 The plane can hold a record cargo of 250,000 kilograms. To access the hold, the node of the plane opens upwards (pictured left). Right: Forklift trucks at China’s Tianjin international airport begin to load medical supplies into the plane, which will carry them to Warsaw, Poland. The plane was designed in the 1980s by the Antonov Design Bureau 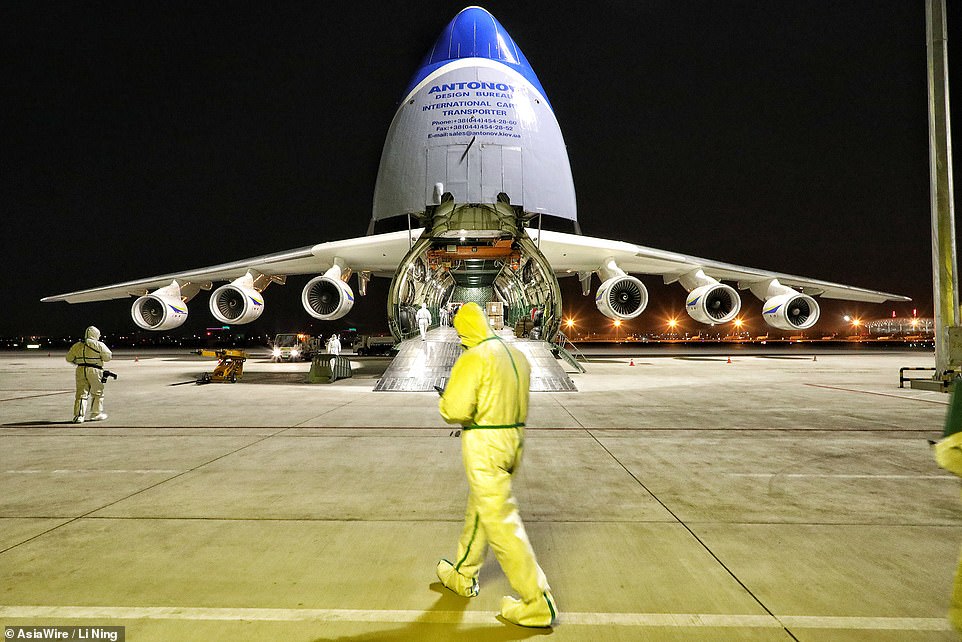 Despite it’s 250 tonne capacity, the plane will make two round-trips from China to Warsaw to deliver the 400 tonnes of supplies that are being transported 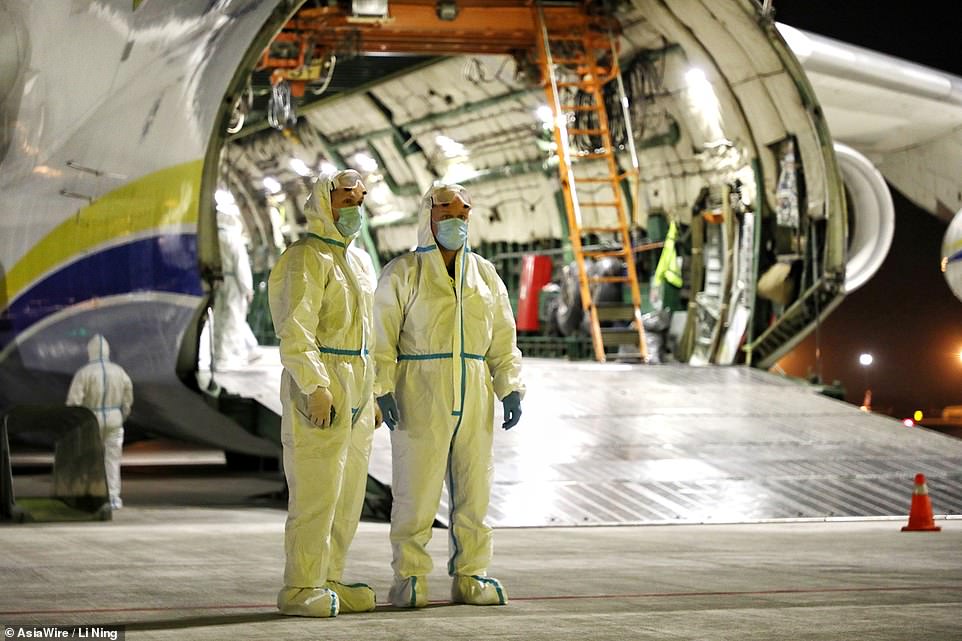 Pictured: Two people dressed in protective clothing help to load the An-225 Mriya with supplies bound for Warsaw, Poland 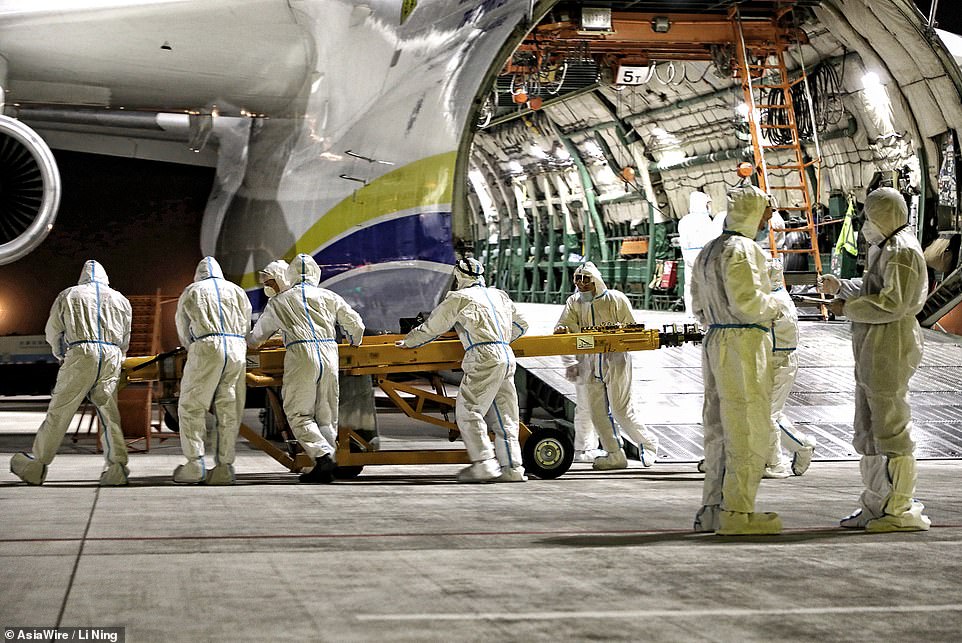 The medical supplies will help Poland’s medical workers in their battle with the coronavirus. Poland has ordered seven million surgical masks, as well as thousands of face shields and decontamination suits which will be transported on the plane

The Antonov An-225 Mriya (meaning ‘Dream’ in Ukrainian) is the World’s largest plane. It is powered by six turbofan engines and is the heaviest aircraft ever built, with a maximum takeoff weight of 640 tonnes.

It also has the largest wingspan of any aircraft in service. The length of the cargo hold of the An-225 is 84 meters long, and is longer than the distance flown by the Wright brothers in the first ever flight in 1903.

It was designed by the Antonov Design Bureau in 1980.  At the time, Ukraine was part of the Soviet Union, and the plane was first developed to carry the Buran space shuttle, as well as the Energia rocket’s boosters.

Only one Antonov An-225 Mriya airplane was ever completed, in 1988, and first flew on the 22 December 1988 with a 74 minute flight from Kiev. It was on static display at the Paris airshow in 1989, and flew during a public display at the Farnborough Air Show in the UK in 1990.

While a second plane was ordered, it was never completed after the collapse of the USSR and Soviet space programme, although the project was briefly revived in 2009 and is said to be 70 percent complete.

After completing its missions for the USSR, the plane was placed in storage in 1994 and sat unused for nine years. Its engines were removed and used on other large planes while it was in storage.

When the need for a larger plane arose once again in the 2000s, the plane was re-engined and put back into service.

Its first commercial flight was completed in 2002, when the plane flew from Stuttgart, Germany to Thumrait, Oman, carrying 216,000 prepared meals for American military personal that were based in the region. The meals were transported on 375 pallets and weighed 187.5 tonnes.

Since then, it has become the crown jewel in the Antonov Airlines fleet, carrying objects once thought impossible to move through the air.

It has carried 150-tonne generators and has become a vital asset for international relief organisations. Its ability to transport vast quantities of supplies across long distances makes it unique from other transport options.

During its time as a commercial operating aircraft, sometimes costing over $2 million to ship items, it has broken numerous records, including the heaviest single cargo item (a generator for a gas power plant that weighed 189 tonnes) and the world’s longest pieces of air cargo (two 42.1 meter test wind turbine blades). 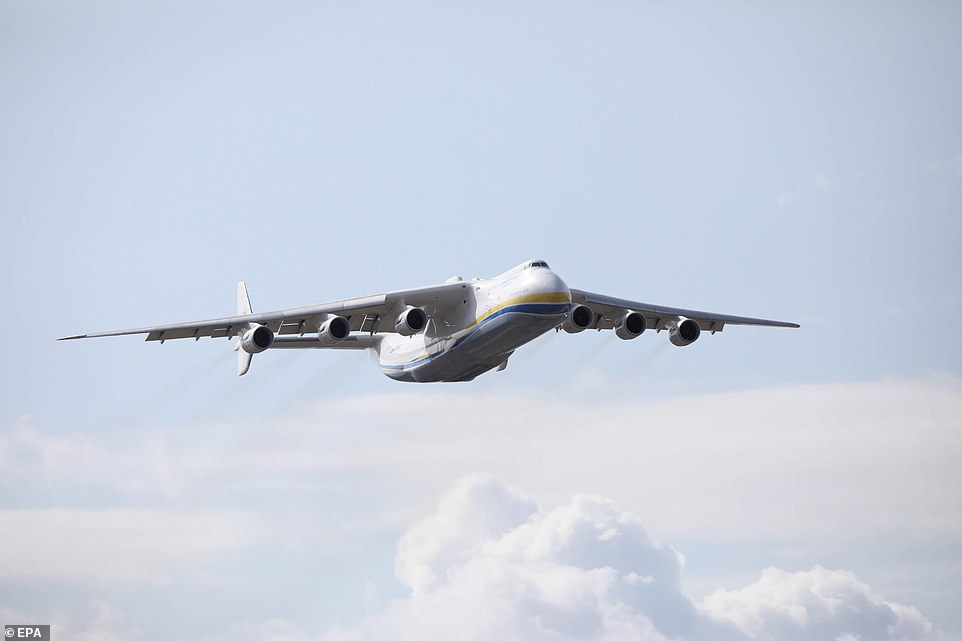 After flying from China, the Antonov An-225 Mriya comes into view as it prepares to land at the Chopin airport, Warsaw 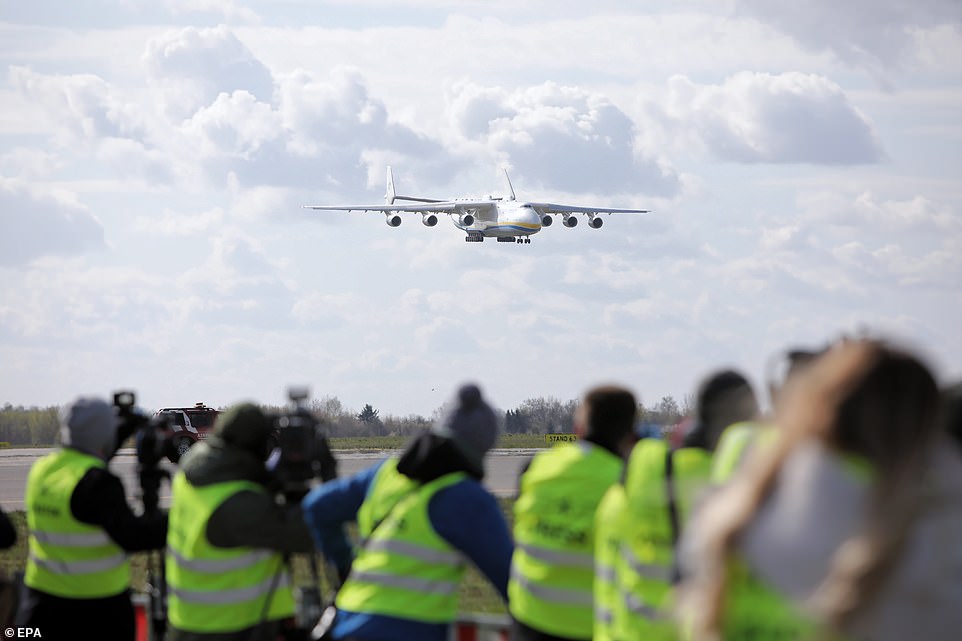 Photographers and airport staff away the arrival of the plane. There is only one of its kind that was ever finished 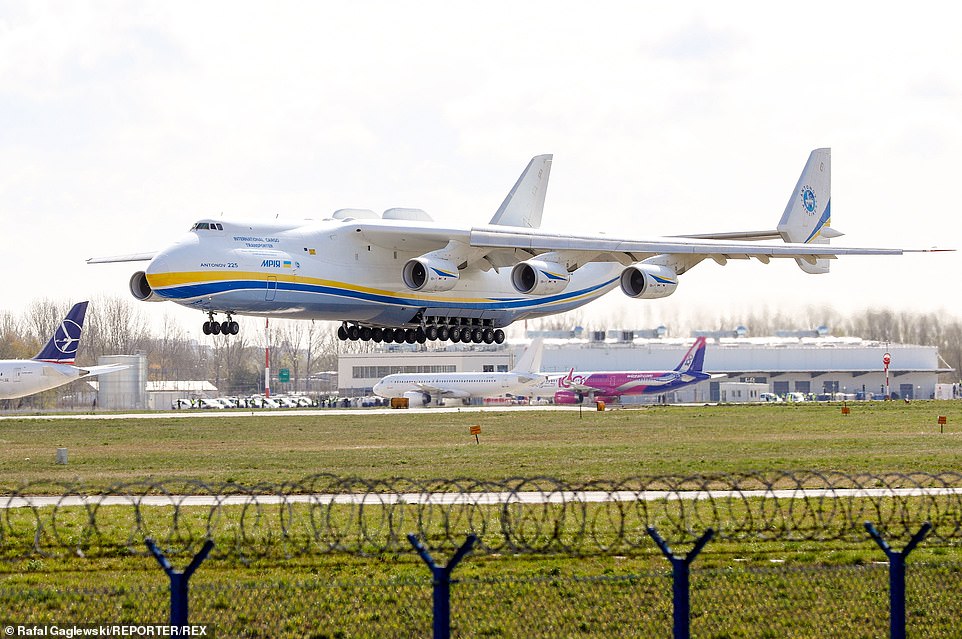 The plane is powered by six turbofan engines, and as the heaviest aircraft ever built, requires 32 wheels for takeoff and landing 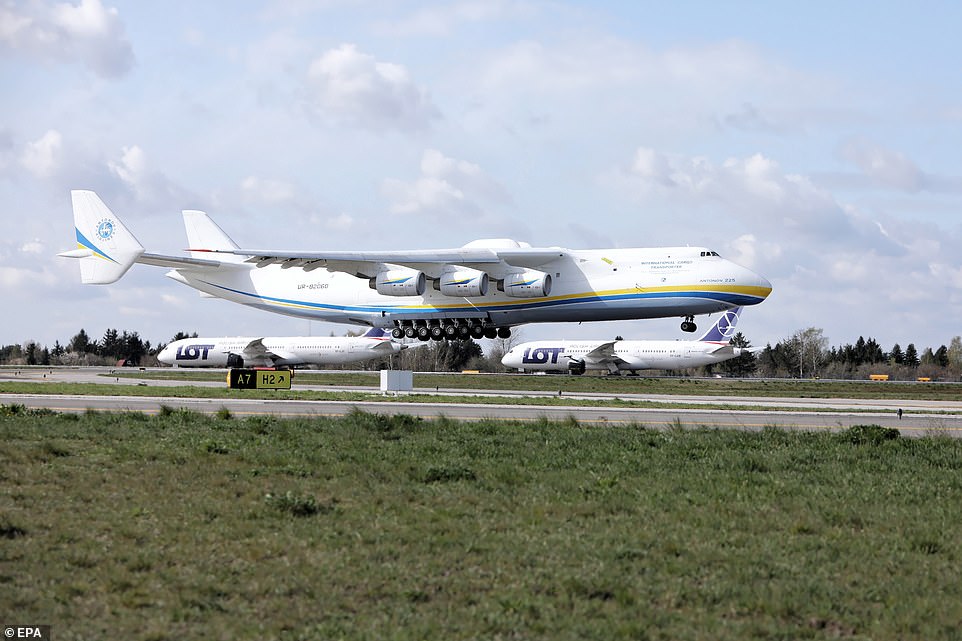 The plane was originally designed in the 1980s to carry the Buran space shuttle, as well as the Energia rocket’s boosters, while Ukraine was part of the Soviet union and in the midst of the space race with the U.S. 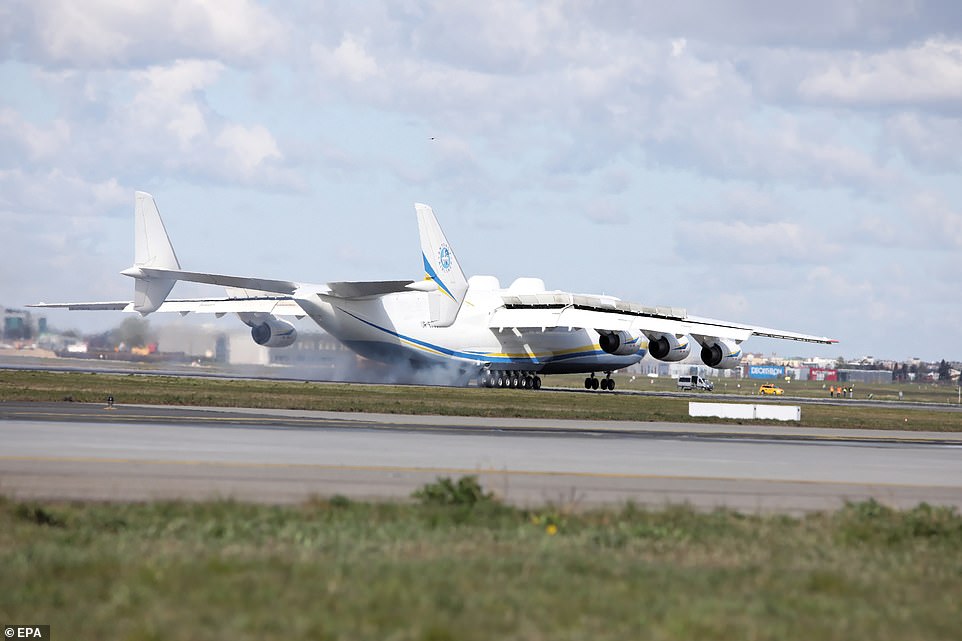 When the Soviet Union collapsed in 1991, and the space programme was wound down, the plane was put into storage in 1994 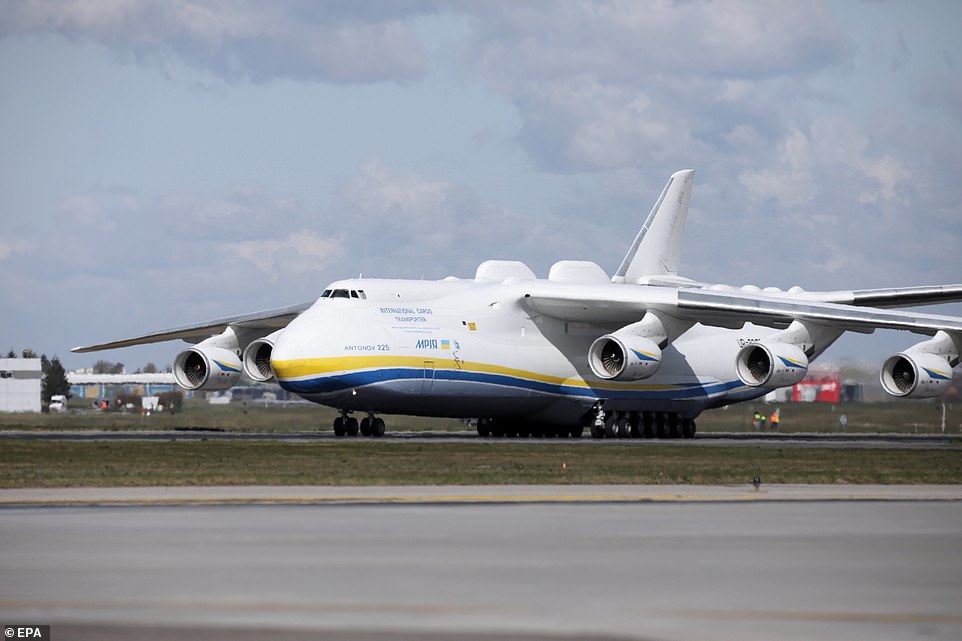 In the 2000s, the need for a large aircraft to carry huge payloads arose once more, and it was re-purposed to complete commercial and humanitarian aid missions

Ukraine is also expected to send the plane back to China to acquire its own supplies to fight the pandemic later this month, joining Beijing’s aid provision list which currently includes Russia, Iraq, Kuwait and Algeria, among others.

An-225 belongs to Ukraine’s state-owned Antonov Airlines and is still the heaviest aircraft ever built, with the largest wingspan, despite being constructed during Soviet Ukraine in the 1980s.

Its Tianjin flight, which left Kyiv on 11th April, with a refuelling stop in former Kazakhstan capital Almaty, was the first in two years after it had undergone extensive upgrades. 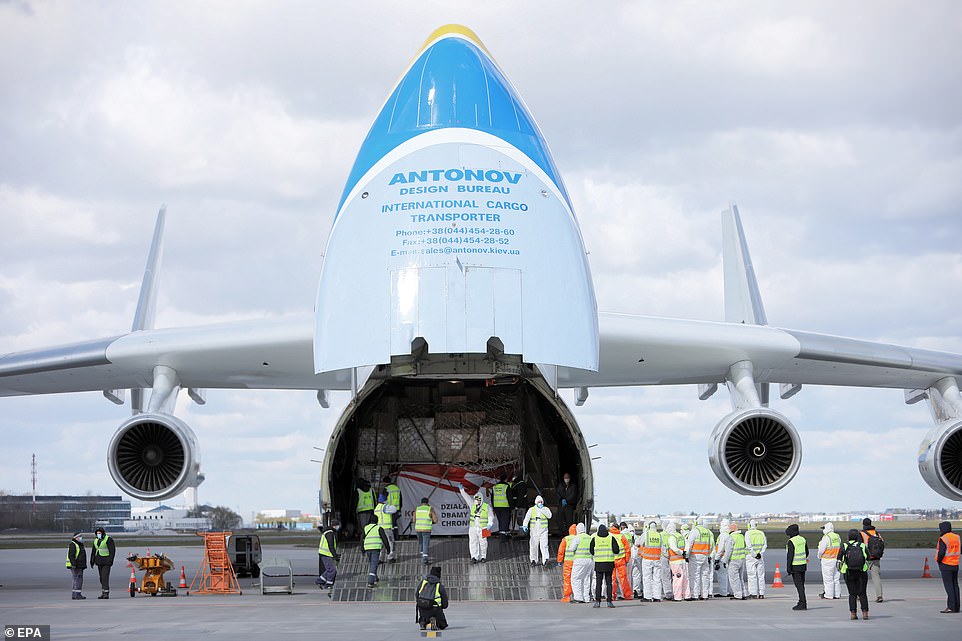 ts first commercial flight was completed in 2002, when the plane flew from Stuttgart, Germany to Thumrait, Oman, carrying 216,000 prepared meals for American military personal that were based in the region 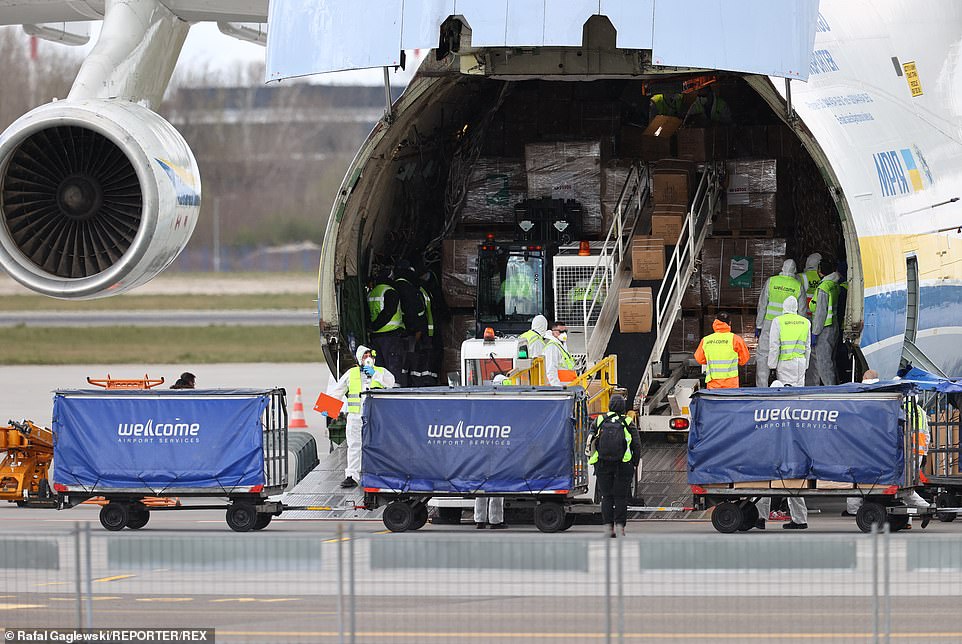 It has since broken a number of world records, carrying both the heaviest item carried by aircraft, as well as the longest

It still holds the world record for heaviest civilian cargo transportation at 253.8 tonnes.

According to reports, Mriya usually makes around 20 trips a year, but it now joins a fleet of five Antonov An-124 Ruslan currently flying medical supplies around the world during the global COVID-19 crisis. 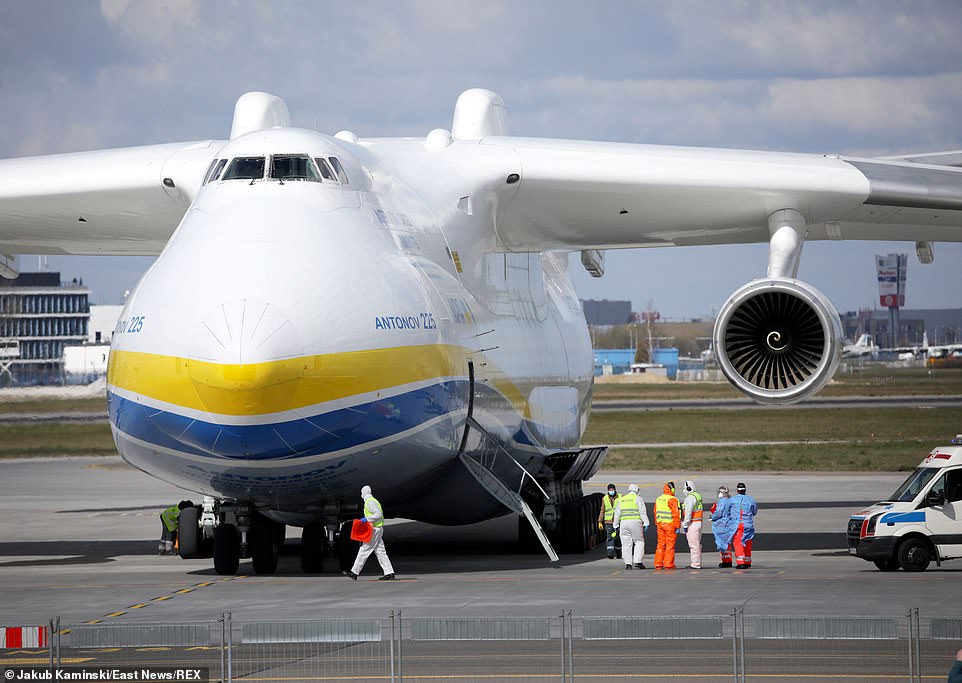 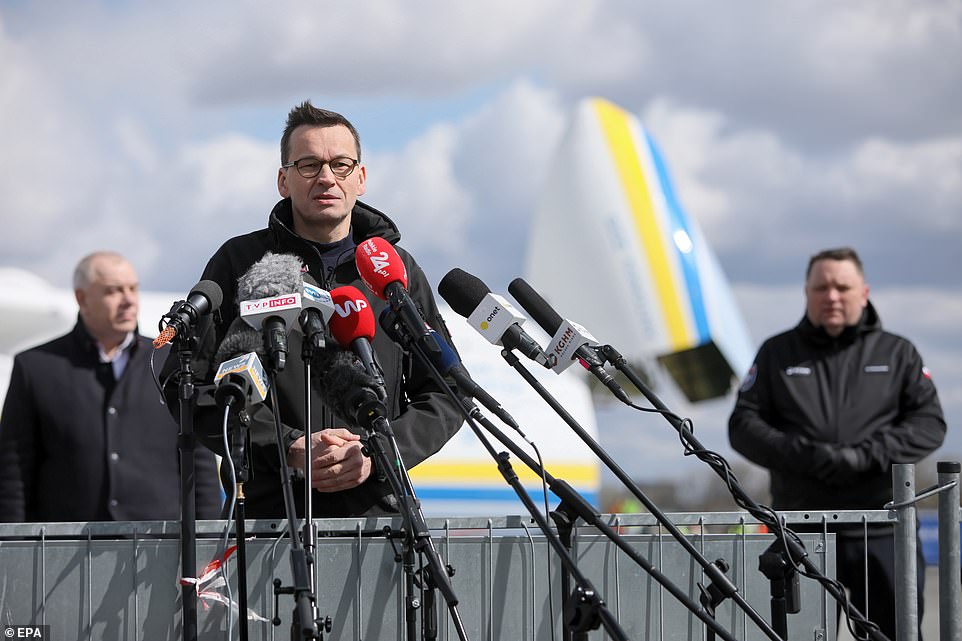 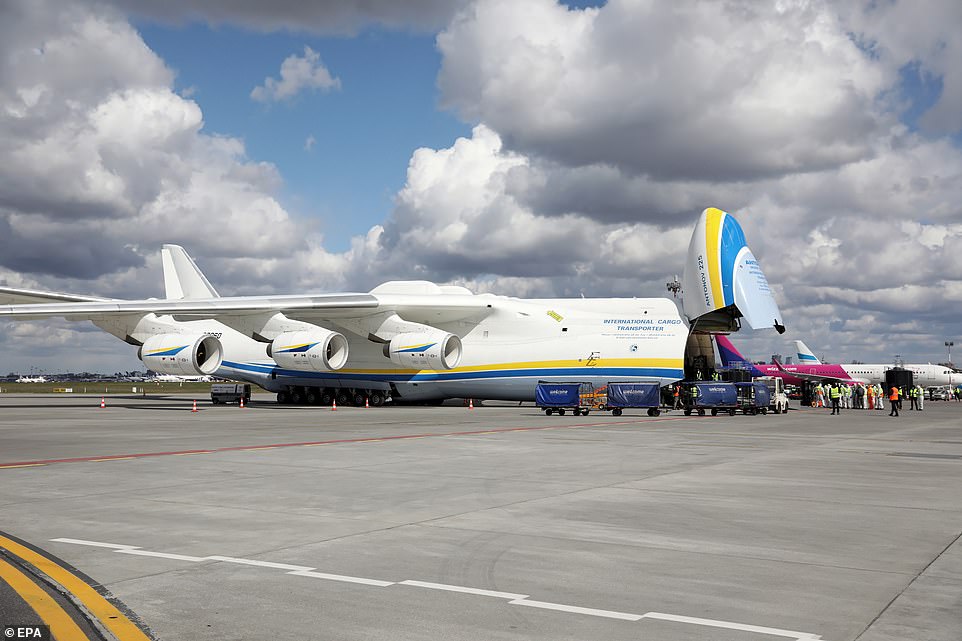 The Polish Ministry of State Assets reportedly said of the decision to hire the six-engine freighter: ‘With just one flight, the An-225 can bring as much cargo from China as 10 Boeing 787 Dreamliners’ 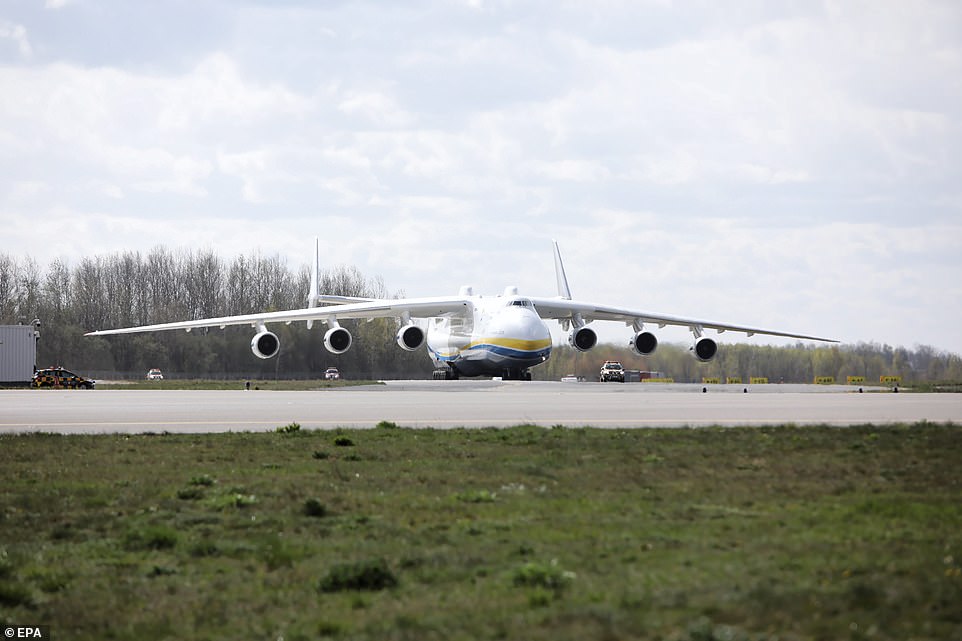 Chinese state media reported that Germany would also be employing the heavy-duty cargo aircraft, and Ukraine is also expected to send it back to China to collect supplies

Aid shipments from China have drawn praise in Italy, Spain, the Netherlands and Slovakia, although some Chinese shipments of coronavirus testing kits and face masks turned out to be faulty or defective.

‘We must be aware there is a geopolitical component, including a struggle for influence, through spinning and the politics of generosity,’ EU’s top foreign policy official Josep Borrell recently wrote in a blog, referring to China. ‘Armed with facts, we need to defend Europe against its detractors.’

Chinese officials have repeatedly rejected claims that Beijing is seeking political gains by providing medical aid to other countries, saying the allegations result from deep-rooted misconceptions of China’s goals in the West. 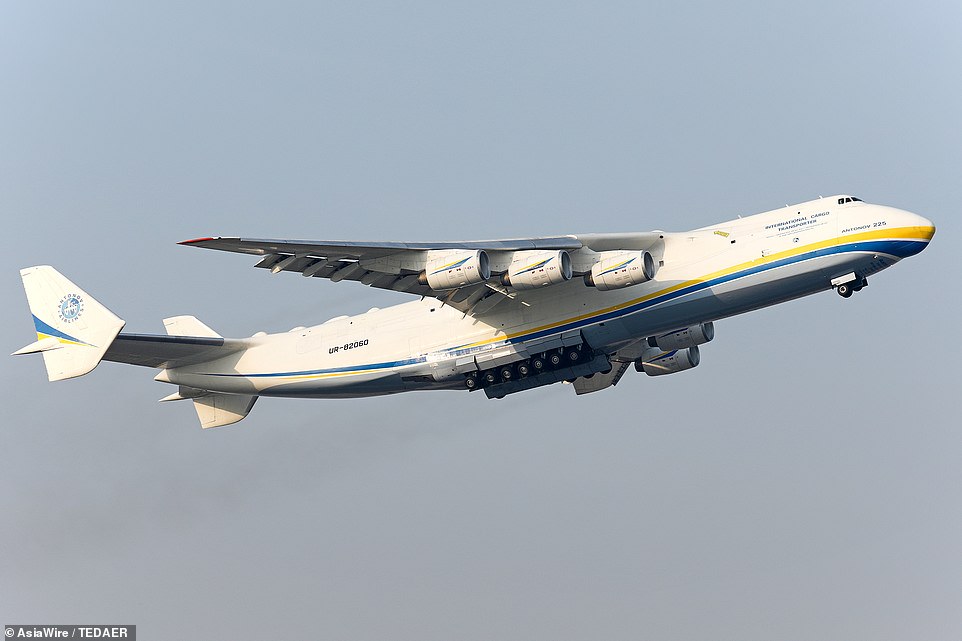 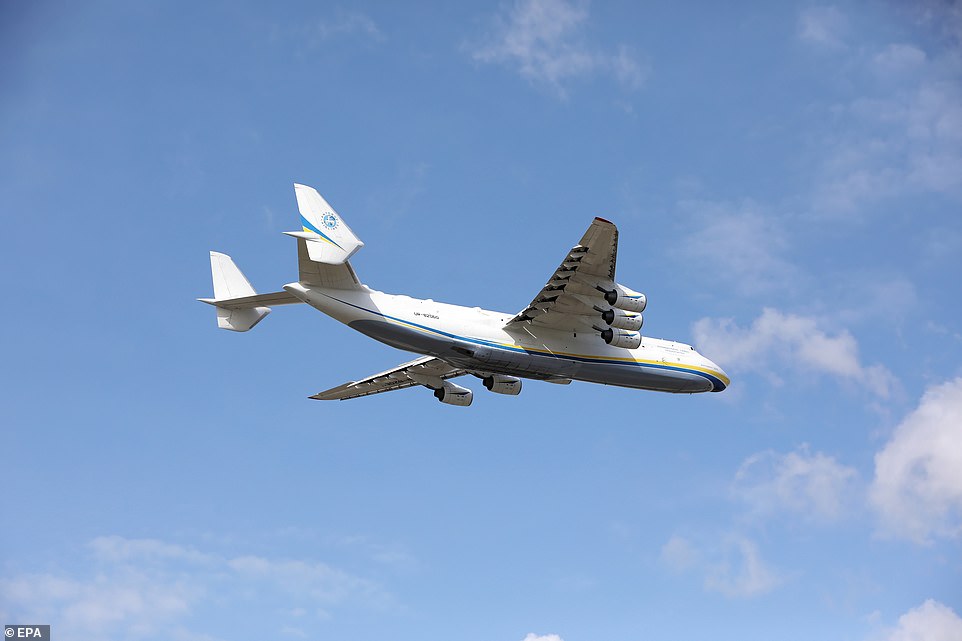 According to reports, Mriya usually makes around 20 trips a year

While China struggles elsewhere to polish its image tarnished by its initial handling of the coronavirus outbreak, Beijing has no problem maintaining its hard-won influence in Eastern Europe, where it battles for clout with the EU as well as with Russia in countries like Serbia.

China was criticized by many in the West for its early mishandling of the health crisis due to politically motivated foot-dragging while the virus raced through a major province and its capital, Wuhan. Now it is seeking to change perceptions through ‘mask diplomacy’ – a combination of soft power policy, political messaging and aid that is designed to portray Beijing as a generous and efficient ally. 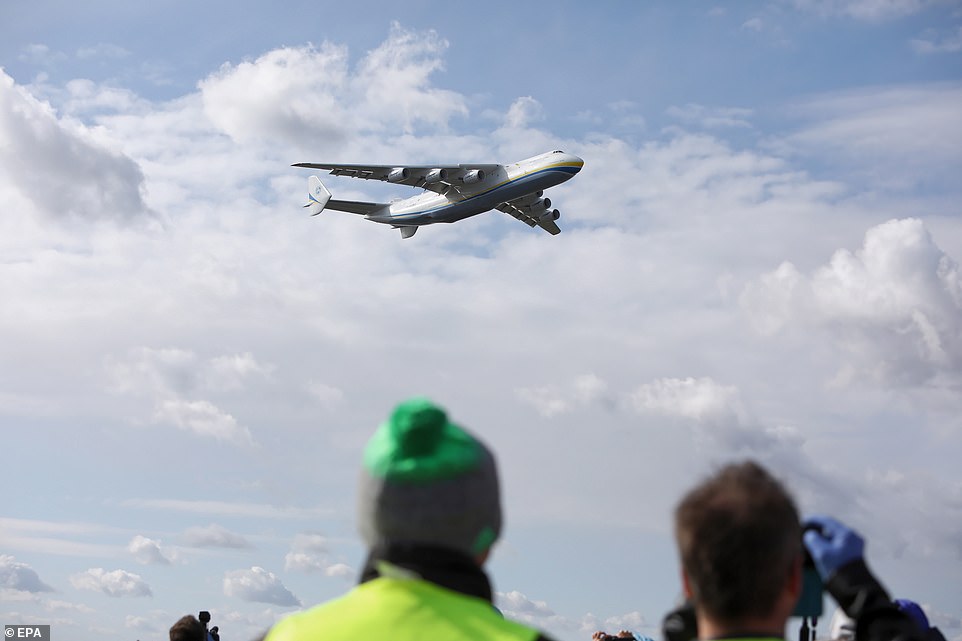 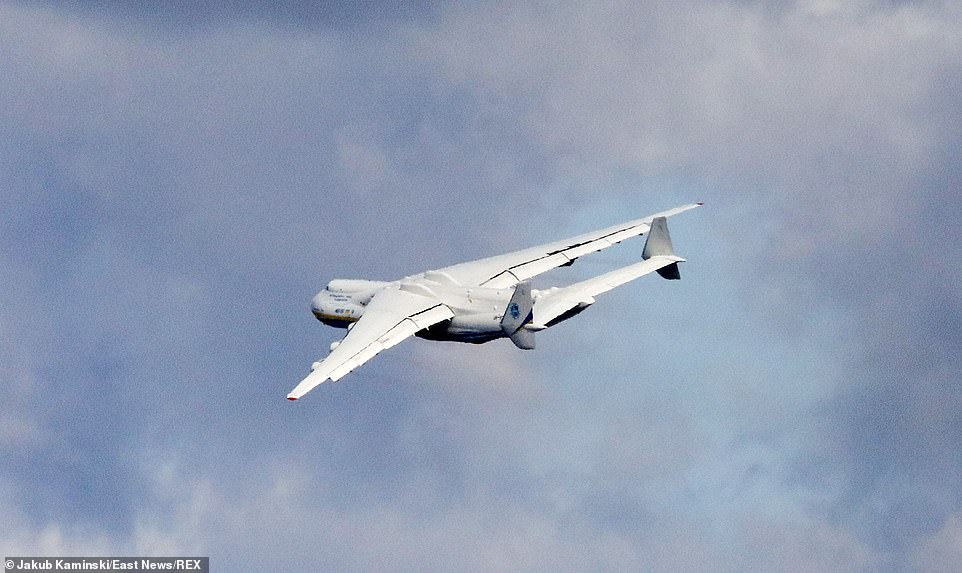 The aid shipments from China drew praise in Italy, Spain, the Netherlands and Slovakia, although some equipment has been faulty 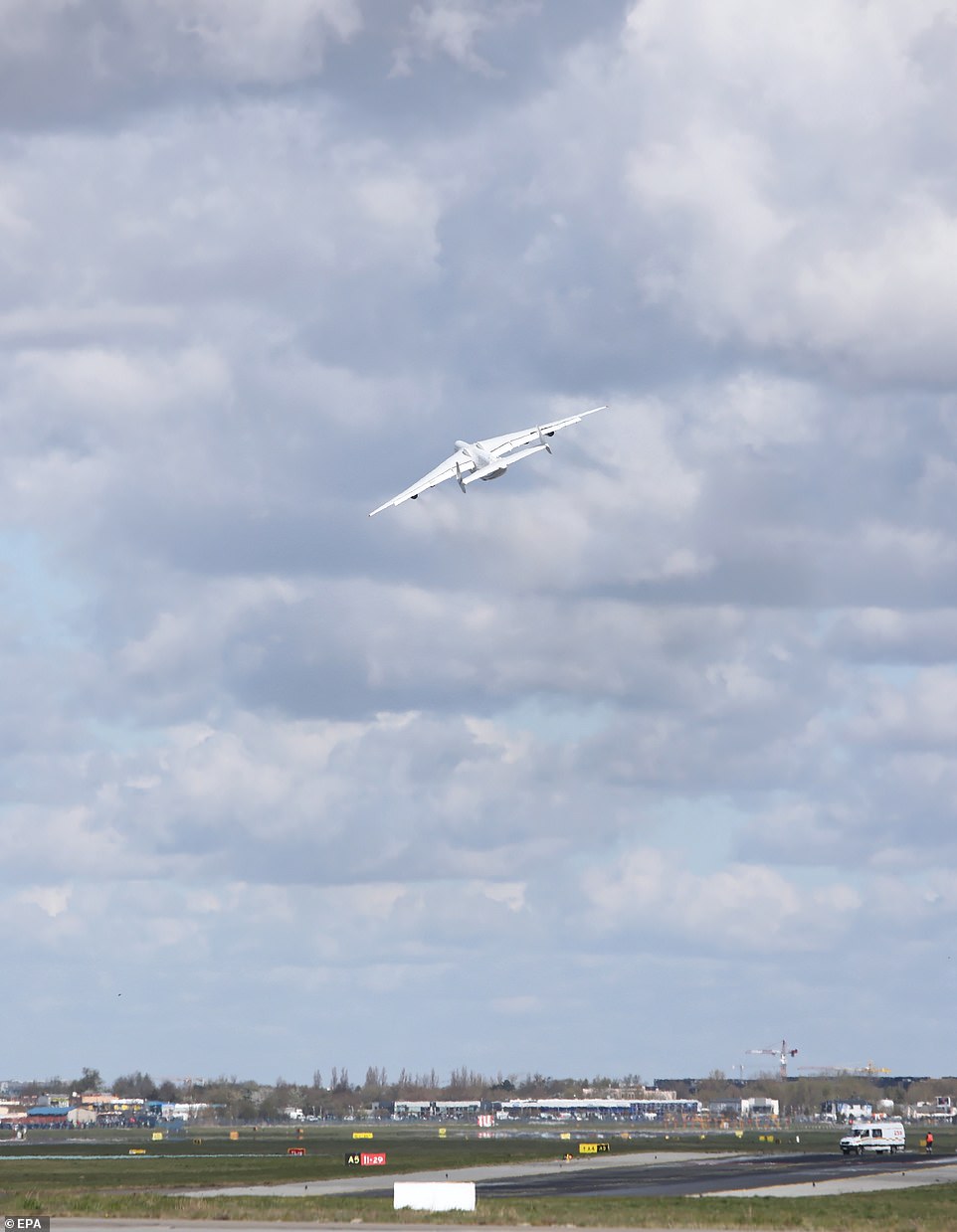 Some, however, have criticised China for seeking to change perceptions through ‘mask diplomacy’