China has threatened to bring ‘economic carnage’ upon Australia in response to big defence spending announced in Tuesday’s federal budget.

The government outlined a huge boost for the defence force, more funding for spies and help for exporters to find new markets in a massive push back against an increasingly assertive Beijing.

In response, Chinese newspaper the Global Times – a mouthpiece for the Communist  Party government – has warned that Beijing will block more Australian exports after already banning a range of goods including barley, wine, beef and coal.

In an article titled ‘Canberra’s defence spending means more economic carnage’, the publication warned Australia’s natural gas exports could be next in the firing line.

The government outlined a huge boost for the defence force, more funding for spies and help for exporters to find new markets in a massive push back against an increasingly assertive Beijing. Pictured: Soldiers at Australia’s school of infantry

The article referred to a report by Bloomberg that two Chinese gas importers were told not to buy from Australia next year.

‘While the authenticity of the report remains unclear and China is unlikely to issue export ban without justified reasons, it doesn’t mean China won’t seek diversification of LNG supplies,’ the editorial warned.

‘In fact, considering the tensions between the two sides and Canberra’s reluctance to show even the slightest sign of willingness to repair bilateral ties, China’s diversification push may cover more products.’

Australia’s natural gas exports were worth a staggering $49billion in 2019, making Australia the largest exporter of LNG in the world.

The article accused the Morrison government of ‘further escalating regional confrontation by substantially increasing investment in defense and national security’.

It also said Australia was only doing this to act as an ‘attack dog’ for America’s ‘so-called Indo-Pacific strategy aiming to contain China.’

The article also accused Australia of ‘relentless and unreasonable provocations’ and warned of retaliation.

In an article titled ‘Canberra’s defence spending means more economic carnage’, the publication warned Australia’s natural gas exports could be next in the firing line

‘Certainly, China does not seek to initiate a ”trade war” but a comprehensive counter plan is necessary to not just protect China’s interests but also deter any potential provocation from Canberra,’ it said.

Canberra-Beijing relations have deteriorated since last year when Prime Minister Scott Morrison called for an independent inquiry into the origins of coronavirus which was identified in the Chinese city of Wuhan.

China has blocked key Australian exports including coal, seafood, beef and barley – and has been blamed for a series of ongoing cyber attacks on Australian institutions.

Some analysts have warned there could be war in the Pacific region in the next five years if China tries to ‘reunify’ Taiwan by reclaiming the self-governing island of 25 million people.

In the face of this potential threat, the 2021 federal budget contained a series of measures that help Australia defend its national security and project power beyond its shores.

On Monday, Queensland Nationals Senator Matt Canavan warned World War Three could be on the cards.

‘We have a high debt to GDP than we have ever had since the end of World War Two and without being too dramatic, we could be on the edge of World War Three with the all the tension in our region,’ he told the Today show.

‘We should put ourselves in a position so we are strong enough to withstand the tensions and threats that could be coming our way.’

Australia’s secret intelligence service, ASIO, will get $1.3 billion over the next ten years.

The government says the cash will boost its ability to protect Australia from security threats.

‘This investment will significantly enhance ASIO’s capability to identify and respond to threats in a more complex security environment. 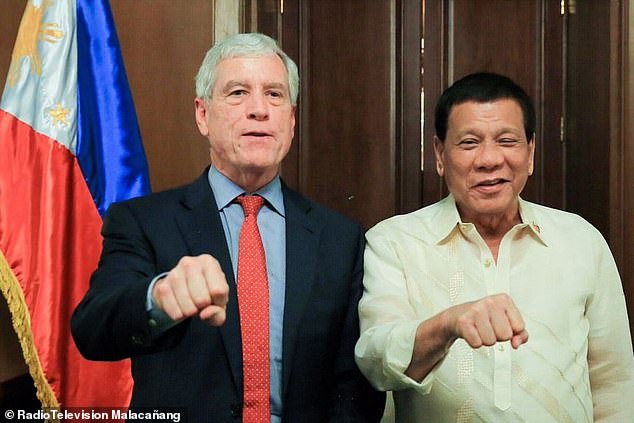 ‘It will also enable ASIO to better leverage Australian industry to help respond to challenges posed by rapid technological change,’ the budget says.

Due to the secret nature of the service, it was not revealed how the money would be spent.

The staffing levels of ASIO are also kept secret from the public.

Before the pandemic about one third of Australia’s exports went to China and some companies almost exclusively sold into the world largest market.

The government is advising Aussie companies to find new markets such as Indonesia, India and Vietnam to avoid being stung again in the future. 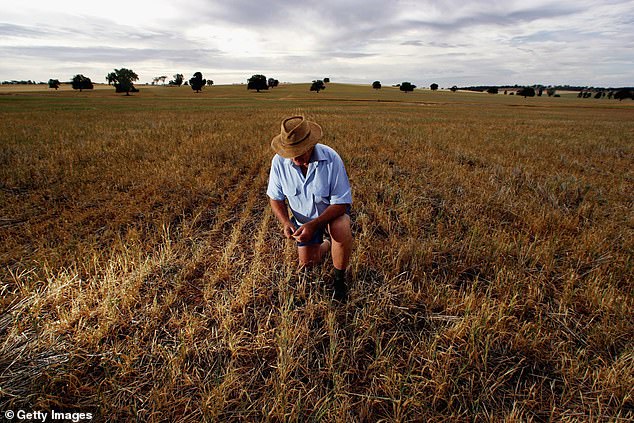 Farmers and other exporters will be helped to find other markets. Pictured: A wheat farmer in Parkes, NSW

Some $198.2 billion over the next four years will help companies diversify their exports markets, increase Australia’s contribution to global efforts to reform the World Trade Organization and enhance Australia’s capability to engage in WTO dispute settlement.

Australia has appealed China’s ban on barley exports to the WTO and is considering doing the same with the ban on wine, which it believes is unjustified.

The cash will also ‘expand Australia’s advocacy and cooperation with partners internationally in pursuit of a free, open and resilient Indo-Pacific,’ the Budget says.

Furthermore, a Global Resources Strategy will be set up at a cost of $20.1 million over two years to help the resources industry develop new markets.

The Strategy will establish new initiatives to support Australian resources industries and build relationships across governments and businesses to identify new investment opportunities in existing and new export markets.

The government will boost the number of staff in the Department of Foreign Affairs and Trade by 87 to support these measures.

Last year Scott Morrison called an extraordinary press conference in which he declared that a foreign state was launching a series of ongoing cyber attacks on Australian institutions such as banks, businesses and hospitals.

Mr Morrison did not name China but sources said Beijing was behind the campaign. 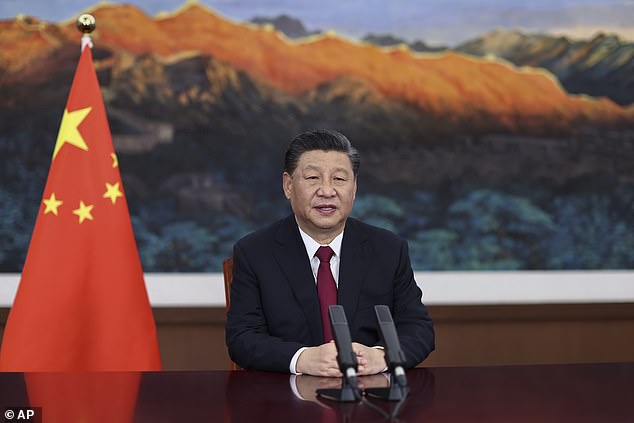 China was not named by the PM as being behind cyber attacks. Pictured: President Xi Jinping

In this year’s budget, the government will provide $42.4 million over two years to improve security arrangements for critical infrastructure assets, including those designated as Systems of National Significance such as Qantas airline and energy companies.

The Fund invests in projects to improve the quality and quantity of cyber security professionals in Australia.

Mr Morrison said the funding will not only protect Australians in the event of battle, but will also provide jobs and the local economy in the Top End. 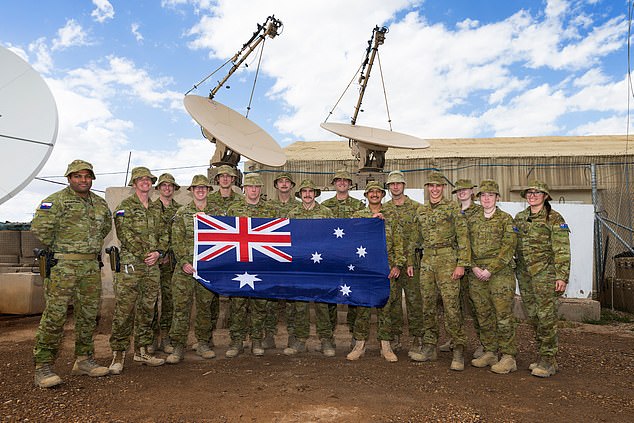 ‘We continue to invest more than $270 billion [over ten years] across Australia, ensuring we have a capable defence force to meet a changing global environment, while backing thousands of ADF men and women with the newest technology and training,’ he said.

The budget also contained a $66.1 million commitment to upgrade the RAAF Base Williamtown runway to accommodate long-range aircraft and facilitate international flights.

This runway is part of the Newcastle Airport, and will support a dual purpose use for both Defence and civilian aircraft.

‘We are committed to position Defence to increase our strategic competition, now and into the future,’ Defence Minister Peter Dutton said. 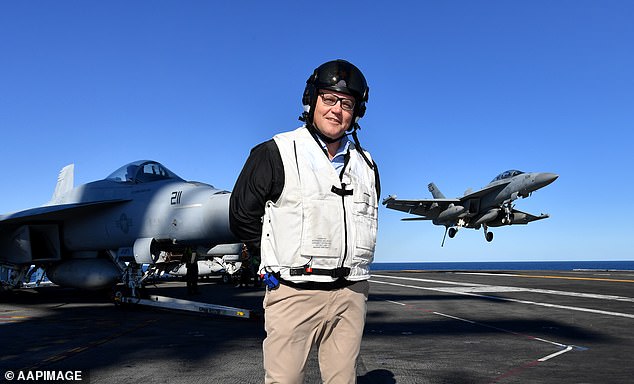 In June 2020, Scott Morrison announced he would spend $270 billion over ten years on defence

Last week, the Prime Minister and Minister for Defence Industry Melissa Price announced $155 million in infrastructure works at HMAS Cairns to support the introduction into service and sustaining of the new Arafura Class Offshore Patrol Vessels.

Last June the federal government announced it will spend $270billion over the next ten years on beefing up the Australian Defence Force with state-of-the-art equipment including long-range missiles and new artillery systems amid strategic and political tensions with China.

The main aim of the beef-up, which will include hiring 800 extra soldiers, is to deter aggression against Australia and its allies – but the Prime Minister also wants to prepare the defence force for war in case tensions escalate.

More than half of $270billion will be spent on improving Australia’s air and maritime forces, including buying new AGM-158C Long Range Anti-Ship Missiles from the US.

The missiles, which were designed in America in 2014, cost around $5million each and can hit a target 370km away, giving Australia significant new range.

They will be attached to F/A-18F Super Hornet planes and can also be paired with other defence aircraft. Troops will be trained how to use the weapon next year.

The government is also considering buying a range of other weapons and defence systems including the surface-to-air Missile, the High Mobility Rocket Artillery System and the MGM-140 Army Tactical Missile System.

In addition, between $5billion and $7billion will be spent on undersea surveillance systems, and up to $17billion will go towards buying more fighter aircraft.

Up to $11billion will be spent on remotely-piloted and autonomous combat aircraft, including air teaming vehicles. 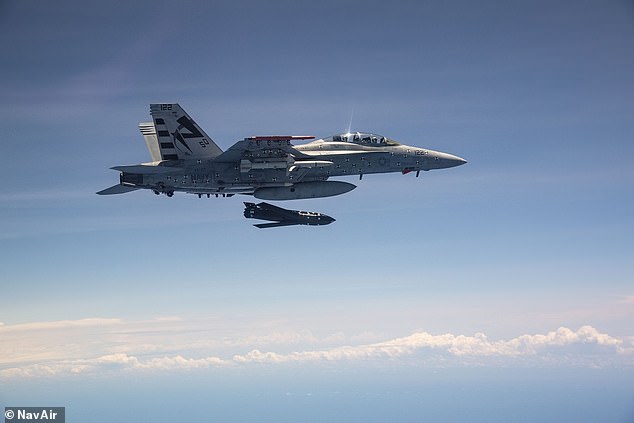 More than half of $270billion will be spent on improving Australia’s air and maritime forces, including buying new AGM-158C Long Range Anti-Ship Missiles from the US

And between $8 and $11.5 billion will buy long range rocket fires and artillery systems including two regiments of self-propelled howitzers.

In May 2020 Australia unveiled The Loyal Wingman unmanned drone, its first military aircraft to be built on home soil in 50 years.

The drone will fly alongside fighter jets including Strike Fighters, Super Hornets and Growlers to provide support and intelligence and can hold several systems including a radar, an infrared search and track system and a defensive laser system.

Billions will also be spent on space capabilities and cyber security as Australia faces ongoing attacks on institutions and companies from a ‘state actor’ which intelligence sources believe is China.

The shift in focus on the Indo-Pacific comes as Australia pulls out of the Middle East with the training mission at the Taji Military Complex in Iraq concluded.

Missiles, drones and artillery systems: How will Australia spend $270billion over next ten years?

Between $168 and $183 billion for the acquisition or upgrade of Navy and Army maritime vessels out to the 2050s. Between $5 to $7 billion in undersea surveillance systems.

Between $400 to $500 million in long range maritime strike missiles.

Expanded air combat and mobility and new long range weapons and remotely piloted and autonomous systems will be introduced.

Between $10 and $17 billion investment in fighter aircraft. Between $700 million to $1 billion for Operational Radar Network expansion.

Between $3.4 billion and $5.2 billion to improve air launched strike capability.

Between $6.2 and $9.3 billion in research and development in high speed long range strike, including hypersonic research to inform future investments

Between $7.4 and $11 billion for remotely-piloted and autonomous combat aircraft, including air teaming vehicles.

Investment to ensure land forces have more combat power, are better connected, protected and integrated with each other and with our partners. Between $7.4 and $11.1 billion on future autonomous vehicles.

Between $7.7 and $11.5 billion for long range rocket fires and artillery systems including two regiments of self-propelled howitzers.

Between $1.4 and $2.1 billion for Army watercraft including up to 12 riverine patrol craft and several amphibious vessels of up to 2,000 tonnes to enhance ADF amphibious lift capacity.

Between $6.8 and $10.2 billion in undersea warfare facilities and infrastructure.

Between $4.3 and $6.5 billion to enhance Air Force’s operational effectiveness and capacity in the Northern Territory.

Between $900 million and $1.3 billion to upgrade key ports and infrastructure to support Australia’s larger fleet of amphibious vessels.

Between $20.3 and $30 billion to increase the supply of munitions and between $1 and $1.5 billion to explore expanding industry capacity for domestic guided weapons and explosive ordnance production capability.

Investment to improve resilience and self-reliance of Defence’s space capabilities, including to assure access to capabilities, enable situational awareness and deliver real-time communications and position, navigation and timing.

Between $1.3 and $2 billion to build our Space Situational Awareness capabilities.