A Chinese power company plans to send a fleet of floating nuclear reactors to provide energy for remote islands and oil rigs by 2020.

The vessels will be fitted with reactors able to produce roughly a quarter of the power of a typical civilian nuclear power plant.

They will likely be deployed in the South China Seas – an area claimed by the state which is contested by the international community.

The boats could also be used to provide emergency relief in the event of natural disasters, including to areas devastated by tsunamis.

A Chinese power company plans to send a fleet of floating nuclear reactors to provide energy for remote islands and oil rigs by 2020. The vessels (artist’s impression) will be fitted with reactors believed to have roughly a quarter of the power of a typical civilian nuclear plant

The ACP100, China’s first small reactor developed by state-owned China National Nuclear Power (CNNP) for practical use is expected to be built at the end of this year in the Changjiang Li autonomous county of Hainan.

The miniature reactor, which the company calls the Linglong One, has already been used on a pilot basis, according to the firm.

China is highly supportive of small modular reactors and Linglong One is the first reactor of its kind in the world to have passed the safety review by the International Atomic Energy Agency.

According to CNNP, compared with million-kilowatt reactor nuclear power plants, the Linglong One features low and controllable core temperatures and is economically superior to other power supply modes and is more environmentally friendly.

The news emerged after state-owned China National Nuclear Corporation (CNNC), based in Beijing, announced it was setting up a new company with one billion Yuan (£115/$150 million) funding.

The vessels are reported to house a sea-faring, 100-megawatt version of CNNP’s ACP100 miniature reactor.

Speaking to the Global Times Chen Xiangmiao, a research fellow at the National Institute for the South China Sea, said: ‘The floating nuclear plants could provide the energy requirements of the islands and reefs in the South China Sea.

‘Also, nuclear power is just one option for the islands and reefs.

‘Wind power and solar energy are also being considered.’

China confirmed its plans for a fleet of floating power plants earlier this year.

A five-year plan was published in March 2016 outlining China’s desire to expand its nuclear generating capacity.

The plants will provide clean energy, heat and even water to remote islands and oil rigs, and will cost more than £300 million ($373 million) each.

Speaking in February, Wang Yiren, a director at China’s State Administration of Science, Technology and Industry for National Defense, said floating nuclear stations will play a vital part of these plans. 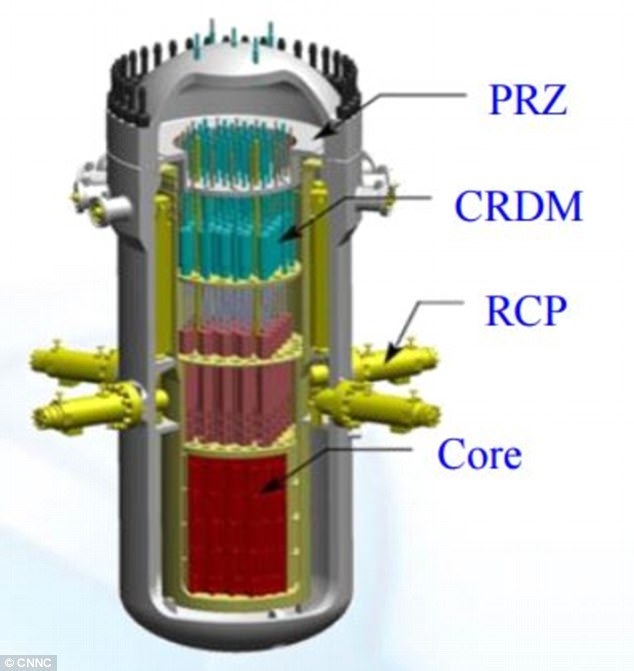 China confirmed its plans for a fleet of floating power plants earlier this year. The vessels could be powered by a sea-faring version of the ACP100 miniature reactor (design pictured)

WHAT IS A FLOATING NUCLEAR POWER PLANT?

A floating nuclear power plant is a site with one or more nuclear reactors located at sea.

It is an autonomous site that can provide clean energy and heat access to sites that are difficult to access.

It can also provide clean drinking water to isolated spots via desalination techniques.

China already has 36 nuclear power plants in operation, with another 21 under construction.

In 2015, the Chinese government approved a project by the China General Nuclear Power Group (CGN) to build a floating nuclear reactor.

The CGN started building the ship in November last year with the project aiming to provide ‘electricity, heat and desalination’ to China’s controversial artificial islands.

The ship’s design resembles a cruise liner with a a small 200Mwt reactor on board.

The concept of embedding nuclear capabilities into a sea-bound vessel is not a new one and the Russian government is expected to complete its own floating reactor next year. 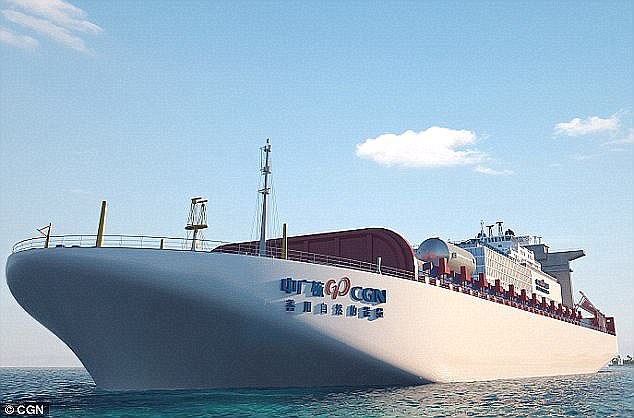 In 2015, the Chinese government approved a project by the China General Nuclear Power Group (CGN) to build a floating nuclear reactor. Pictured is an artist’s impression of the CGN vessel 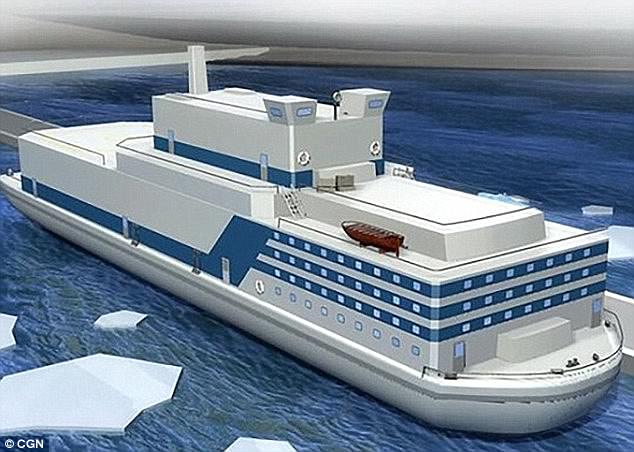 China plans to send a fleet of the floating power plants, which will likely look like this artist’s impression of a CGN floating plant, to power remote islands and oil rigs by 2020 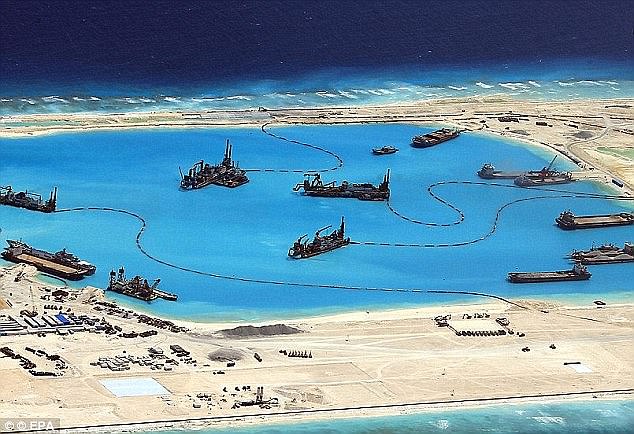 The plants are expected to provide clean power to the controversial ‘fake’ islands made by China in the area (pictured), as well as remote oil rigs

The decision to build the ships prompted worries that, with a fleet of nuclear power plants, China could more easily command authority over the sizeable South China Sea.

The disputed region is also claimed by south-east Asian nations including Vietnam, Indonesia and the Philippines.

Environmental analysts have also expressed concerns over the possibility of a nuclear meltdown if there are errors in regulation, especially given that there are often typhoons and other extreme weather events in the surrounding region.

According to Times of India, David Lochbaum, a nuclear engineer and the director of the Nuclear Safety Project, said: ‘The floating accident scenario carries with it the potential for molten parts of the reactor core burning through the bottom of the barge to reach the sea water below, which would be catastrophic.’ 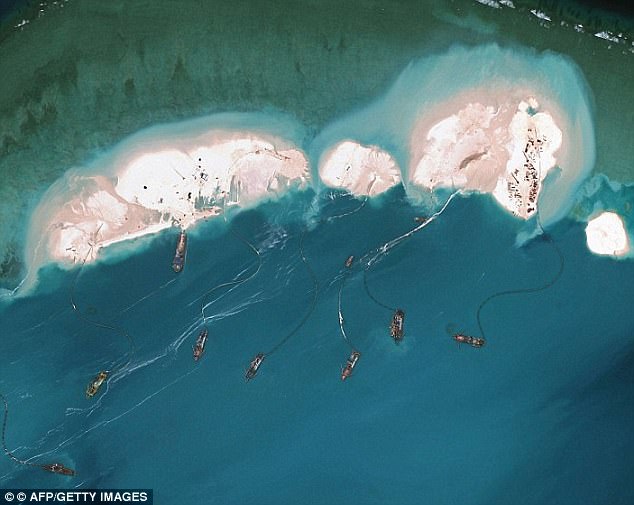 The Spratley and Paracel islands are contested by China, the Phillipines and other south-east Asian nations 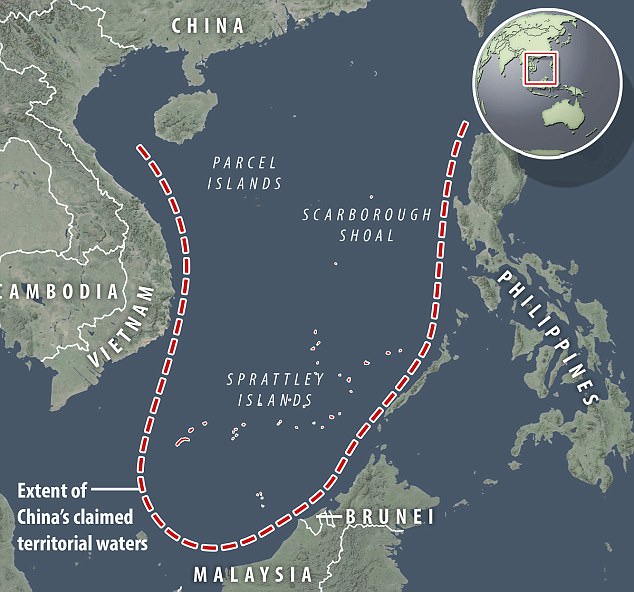 The sovereignty of the South China Sea region has been heavily disputed over decades, focussing on whether China can claim ownership of the Spratley and Paracel outcrops which may contain important reserves of natural resources.

China says it owns an area defined by a ‘nine-dash line’ which stretches over hundreds of miles of water, and claims their right dates back centuries.

A case brought by the Philippines to the United Nations challenging China’s nine-dash line claim on the South China Sea is due for a ruling over the next couple of months.

Tensions have escalated over the past year with news of China’s covert construction of the artificial islands and landing of civilian aircraft on the reefs, which prompted international concern in January. 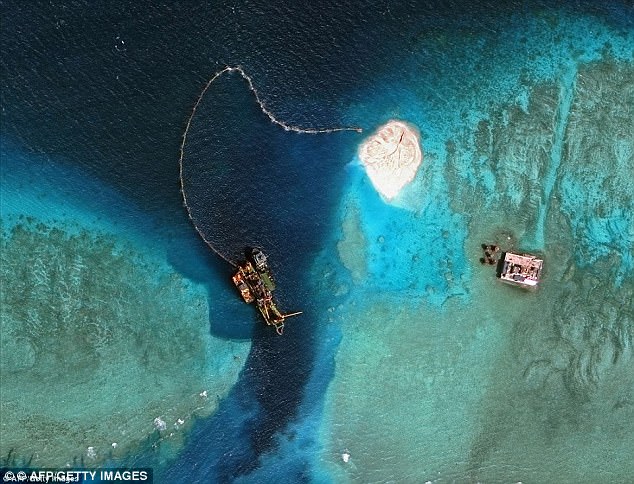 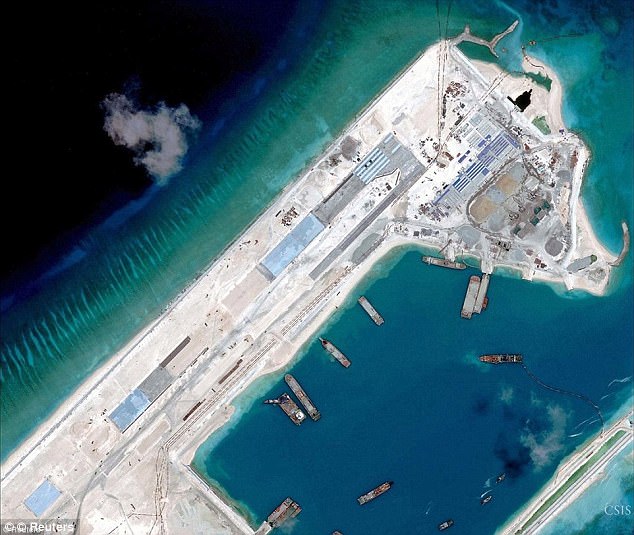