China’s economy is seeing its fastest growth this year as Chinese firms grab market share from rivals struggling during the pandemic.

After wrestling the world’s first outbreak to the ground in January and February, China has kept Covid-19 cases to a minimum and won praise from the WHO for its handling of the pandemic.

Since then, Chinese firms have taken advantage of their good fortune while their global rivals grapple with reduced manufacturing capacity.

Chinese factory activity has already picked up while exports from the world’s second-largest economy rose 9.9 per cent in September from a year earlier.

Imports grew at their fastest pace this year, surging 13.2 per cent after a fall of 2.1 per cent in August and beating expectations of a slight 0.3 per cent rise.

The strong trade performance suggests Chinese exporters are making a brisk recovery after overseas orders were thrown into chaos by the pandemic.

The 9.9 per cent rise in exports in September follows a 9.5 per cent increase in August, according to customs data.

Imports from Taiwan surged 35.8 per cent in September from a year ago, while purchases from the United States rose 24.7 per cent on-year.

However, imports from Australia fell 9.5 per cent amid a months-long diplomatic row between Beijing and Canberra.

‘The big picture is that outbound shipments remain strong, with easing demand for Covid-19 related goods such as face masks being mostly offset by a recovery in broader demand for Chinese-made consumer goods,’ said Julian Evans-Pritchard, a China analyst at Capital Economics.

‘A jump in imports suggests that domestic investment spending remains strong,’ he said.

But some say that exports could peak soon as demand for Chinese-made protective gear recedes and the effect of the massive declines wears off.

Official figures show China has recorded 80,729 cases and 4,634 deaths since the start of the pandemic, numbers which were once high but have long since been dwarfed by the outbreaks in Europe, the US and elsewhere.

Last month WHO executive Mike Ryan offered his ‘deepest congratulations’ to China’s people and health workers for bringing the crisis under control.

A recent article in medical journal The Lancet said China’s strict lockdown and effective contact tracing were partly responsible for the country’s success.

The memory of the SARS epidemic in the early 2000s and a relatively small number of people living in care homes were also given as explanations. 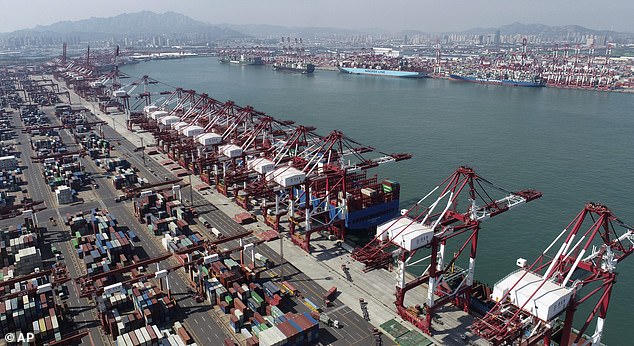 Container ships are docked at a port in Qingdao in China’s Shandong province last week, with exports and imports both rising strongly in the world’s second-largest economy

The virus is seen as sufficiently under control that some 637million people travelled inside the country during the recent eight-day Golden Week holiday.

The travellers – accounting for nearly half of China’s 1.4billion population – spent nearly $70billion in a further boost to the domestic economy.

Wang Jun, chief economist at Zhongyuan Bank, said the trade data showed government support for the economy has kicked in as the epidemic comes under control.

A recent rise in the value of the Chinese yuan had also boosted imports and people’s spending power, Wang said.

The yuan rose to a 17-month high against the US dollar on Friday.

The rise in imports pushed the trade surplus for September down to $37billion, compared with $59billion in August.

Zhang Jun, chief economist at Morgan Stanley Huaxin Securities, said higher purchases of US products under the Phase 1 US-China trade deal, and the resumption of logistics services in the United States and Europe, contributed to China’s import strength.

Top US and Chinese trade officials reaffirmed their commitment to a Phase 1 trade deal in a telephone call in August.

China’s trade surplus with the United States narrowed to $31 billion in September from $34billion in August.