A group of Chinese parents are risking their lives to clear the names of their children who were killed in a bloody crackdown on Tian’anmen Square 30 years ago as they attended a pro-democracy protest.

On June 4, 1989, Chinese tanks and soldiers sent by the Communist Party leadership crushed the student-led movement in the centre of Beijing, killing hundreds, and by some estimates more than 1,000.

The event is the most censored topic by China’s ruling Communist Party who paints the young participants as anti-government rioters aiming to overthrow their regime.

Chinese mothers whose children were killed during the 1989 Tian’anmen Square crackdown are pictured gathering at a secret meeting in March to commemorate the 30th anniversary of the event. The group consists of 127 members 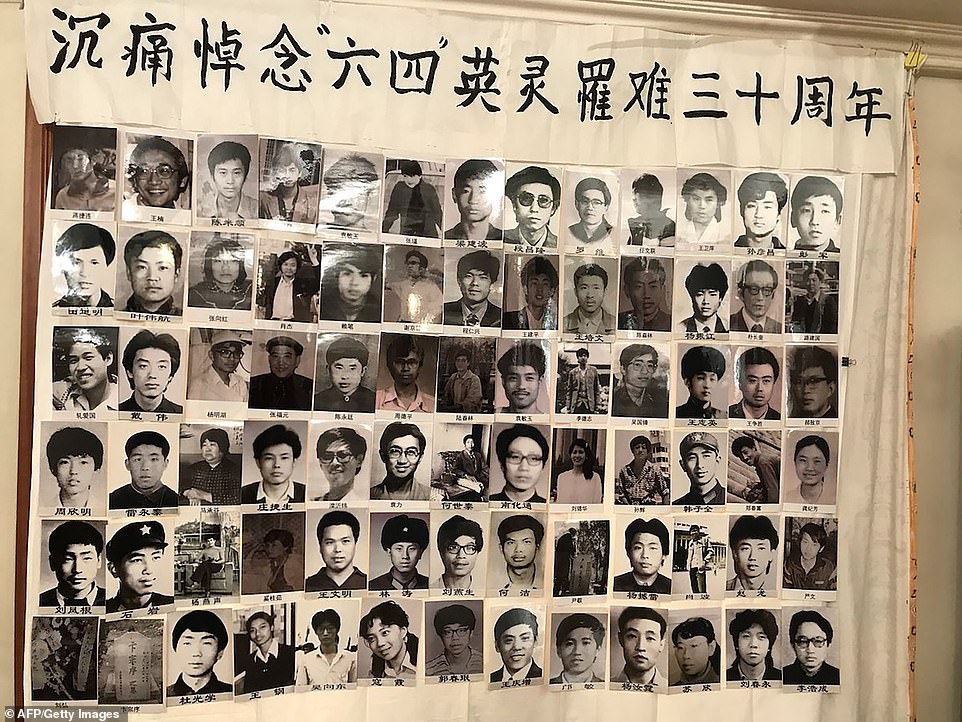 A banner with pictures of the young protesters killed during the bloodbath is hung at the meeting as their mothers try to heal their wounds. Beijing has never released the official death tolls as a result of the event and any discussion of it is prohibited 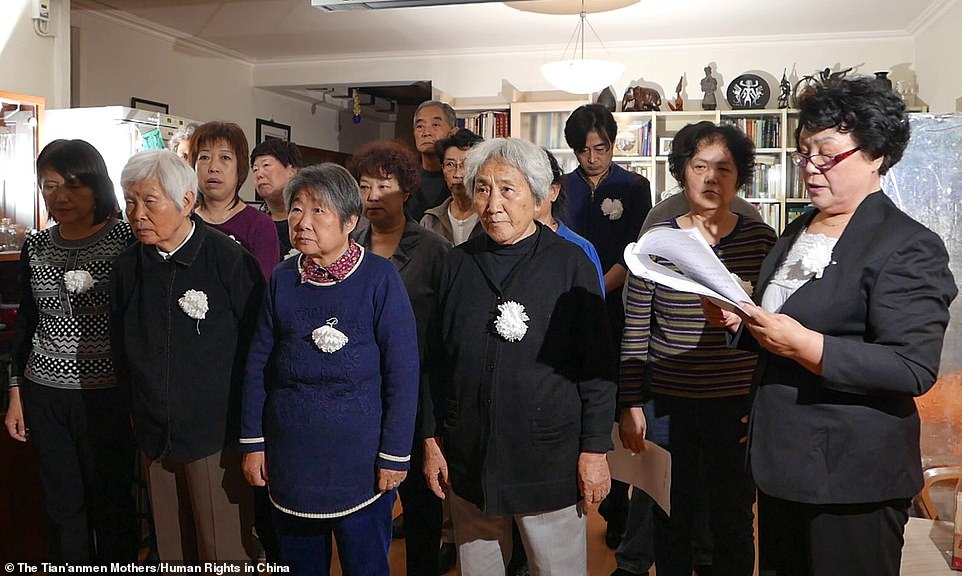 The group was founded in 1995 by two mothers whose children were killed on that fateful day. Over the years, more and more people with similar experience found them and they meet regularly to pay tribute to their love ones and compatriots

Internet searches for the event are banned in China. Public commemorations of the movement are strictly forbidden.

Family members of the victims are treated as ‘criminal suspects’ and often put under surveillance in the lead up to its anniversary every year.

‘The government is trying to erase the episode from the Chinese history,’ said a spokesperson from Human Rights in China, a New York-based organisation, who added that Beijing had never released the official death tolls as a result of the event.

A number of Chinese residents who lost their loved ones during the military crackdown have been demanding answers from China’s top leaders for more than 20 years – to no avail. They call themselves the ‘Tian’anmen Mothers’. 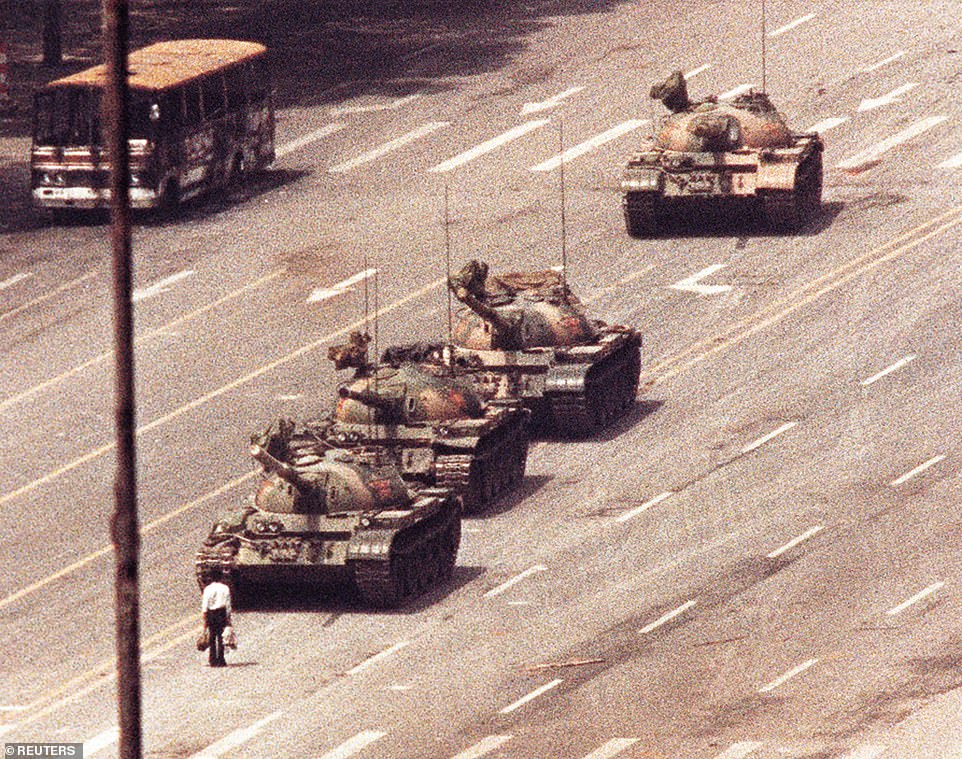 The bloodbath has been immortalised by the above picture called the ‘Tank Man’, in which a student holding bags of grocers stand in front of a row of tanks to protest the clampdown by the armies against its own people. The picture was taken by photographer Jeff Widener of the Associated Press from a sixth-floor balcony of the Beijing Hotel near the Tian’anmen Square 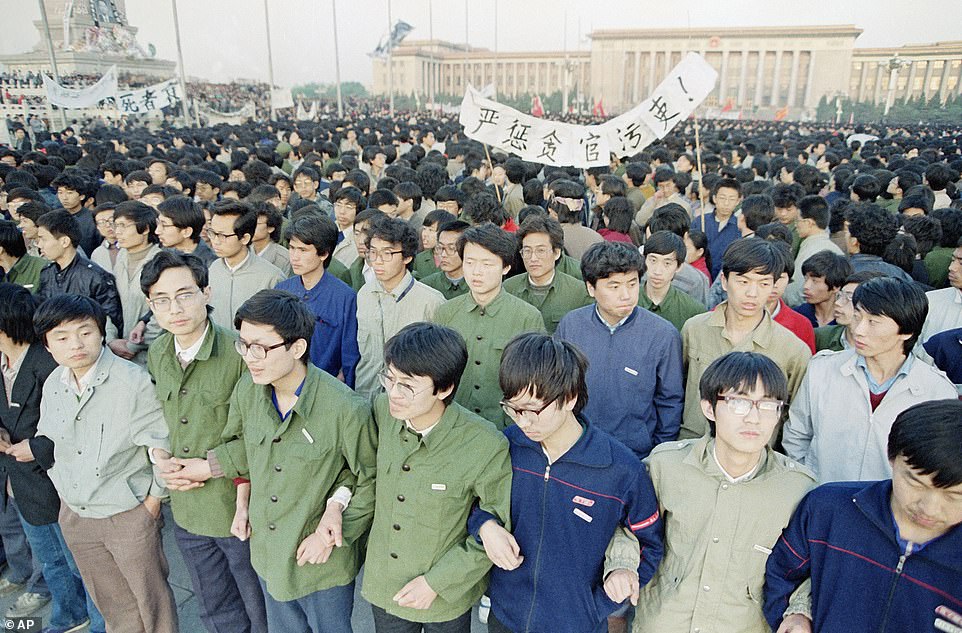 On June 4, 1989, Chinese tanks and soldiers sent by the Communist Party leadership crushed the student-led movement, which had been going on for weeks, in the centre of Beijing. They killed hundreds, and by some estimates more than 1,000 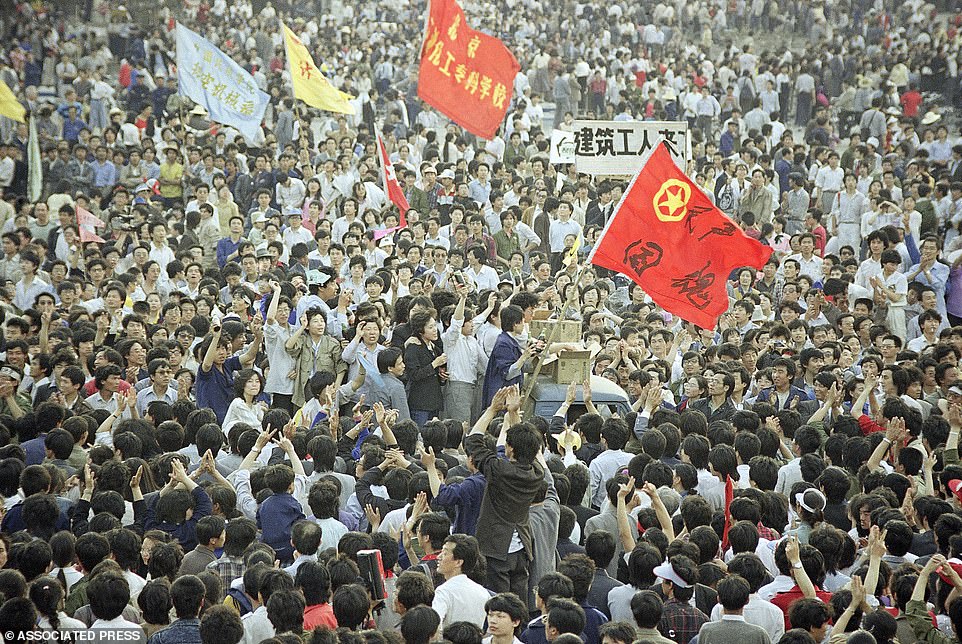 ‘The Tiananmen Mothers are are a beacon and the conscience of Chinese civil society,’ a spokesperson of Human Rights in China told MailOnline. The New York-based organisation has translated the letters written by the group to support their cause

The group was founded in 1995 by two mothers whose children were killed on that fateful day.

Over the years, more and more people with similar experience found them and it now consists of 127 members.

Another 55 who have passed away insisted the group put their names on any open letters addressed to the top leaders.

Together, they try to heal their wounds which still remain open three decades on.

They face the risks of being penalised by the authorities and meet regularly at secret locations to pay tributes to the victims.

In March this year, they gathered again to commemorate the 30th anniversary of the crackdown. And yet again, they penned an emotional open letter to the Chinese leaders to demand justice.

The group wrote: ‘It has been 30 years since the June Fourth Massacre.

‘While it may be just the blink of an eye in the great river of history, it can be an eternity in a person’s life-long enough for a newborn to become a parent himself.

‘For 30 years, dust has risen and fallen, and the moon has waxed and waned, but nothing has soothed our trauma and pain inside.’

The open letter, written in simplified Chinese, was translated by Human Rights in China which supports the cause of the group and hopes to bring their messages to more people.

‘In defying the government-enforced amnesia to document the truth of June Fourth, unearth evidence that the Chinese authorities try to bury, and insist on justice for those killed, the Tiananmen Mothers are are a beacon and the conscience of Chinese civil society,’ Mi Ling Tsui, the Communications Director of Human Rights in China, told MailOnline. 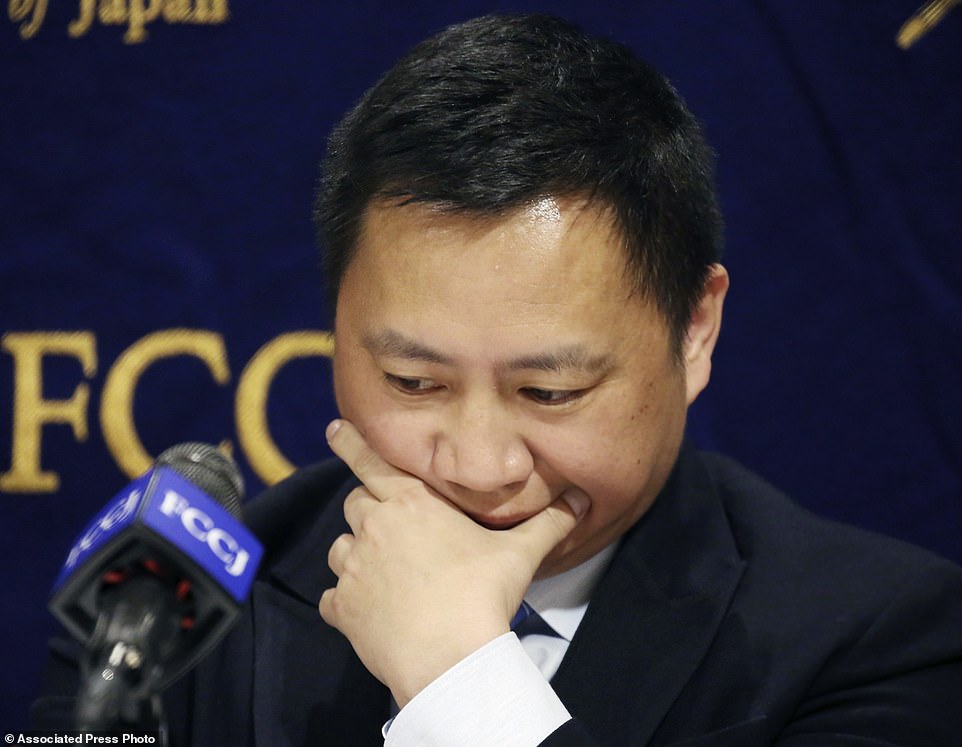 Veteran Chinese dissident Wang Dan (pictured) is urging Western nations to restore the link between human rights and trade with China in the press conference, days ahead of the 30th anniversary of the 1989 student pro-democracy protests 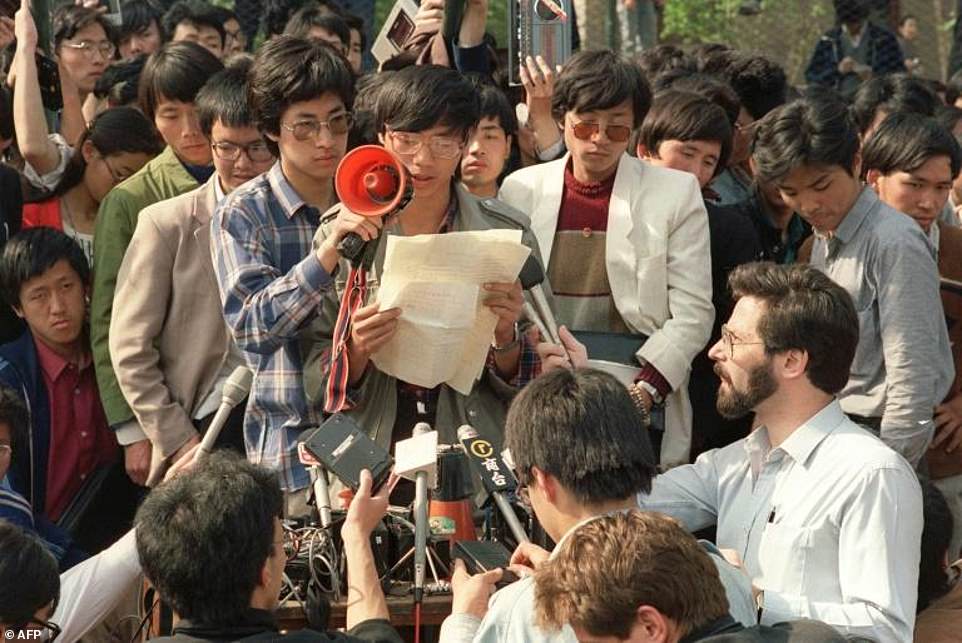 Wang Dan (central) who was 20 at the time, was a leader of the Tiananmen pro-democracy movement. This picture was taken on May 1, 1989 in Beijing, roughly a month before the crackdown. He later found himself on top of the most wanted list

Eyes are on China as the 30th anniversary of the controversial crackdown is fast approaching.

Veteran Chinese dissident Wang Dan, who was one of the student leaders at the 1989 protest, today urged Western nations to restore the link between human rights and trade with China in a speech.

He said the overthrow of the one-party Communist government must be the ultimate goal of such a campaign.

‘China becomes a threat for the free world, and in my opinion, I think it is time to re-link trade and human rights issues. That might be the only way to deal with this problem,’ Mr Wang said.

Mr Wang said free trade should be conditional on China’s respect for freedoms, including labor rights and an open internet. He said putting rights on the agenda could also help reduce the U.S.-China trade imbalance.

‘You don’t have to pass a bill, you can just use this way to link trade and human rights,’ Mr Wang said.

Mr Wang, then a freshman at Peking University, was a key leader of the student protests and ended up at the top of the government’s most-wanted list following the crackdown.

He served two prison terms before being freed in 1998 and allowed to move abroad.

Mr Wang, who has taught at a university and now lives in the United States, remains committed to the cause of bringing democracy to China.

‘It is time for us now, for the whole democratic countries now, to re-recognise the true face of the (Communist Party of China) and try to learn some lessons from the Tiananmen massacre,’ he said.