China has taken its love for giant pandas to new heights.

An airline company has launched a daily flight inspired by the black-and-white animals, which is considered by the nation to be its national treasure.

Passengers on the so-called ‘Panda Route’ are transported by an Airbus A350 sporting cartoon livery of eight pandas, greeted by air hostesses donning panda-inspired uniforms and treated with food resembling the image of the lovely bears.

Is this the cutest flight you’ve seen? A Chinese airline has launched a flight with aircraft and food inspired by the bears 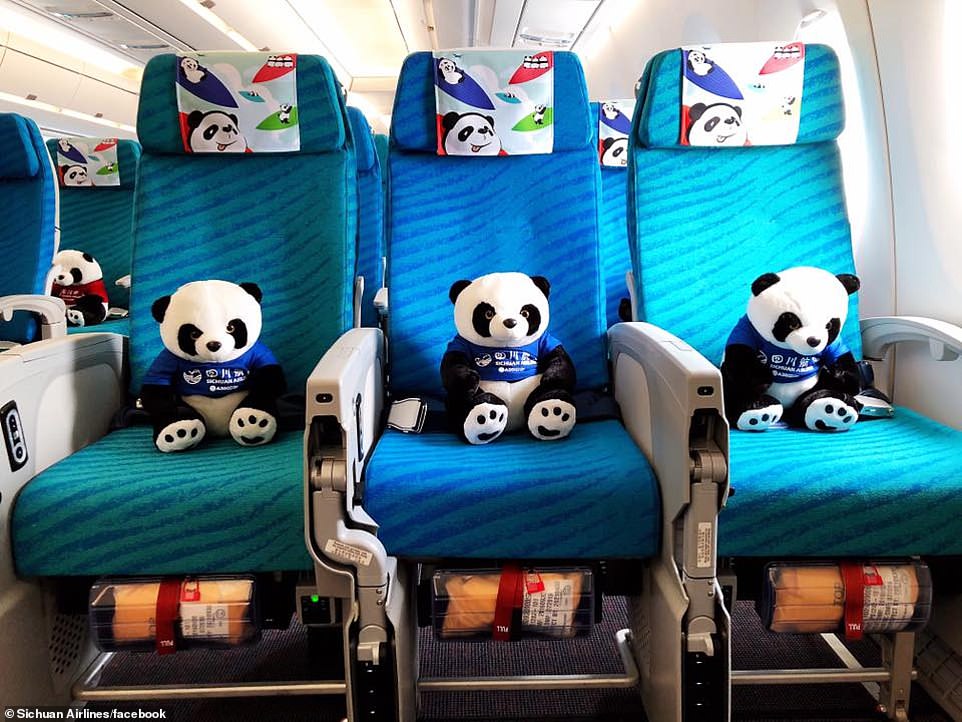 All aboard! The flight is operated by Sichuan Airlines and serves domestic travellers in China between Beijing and Chengdu 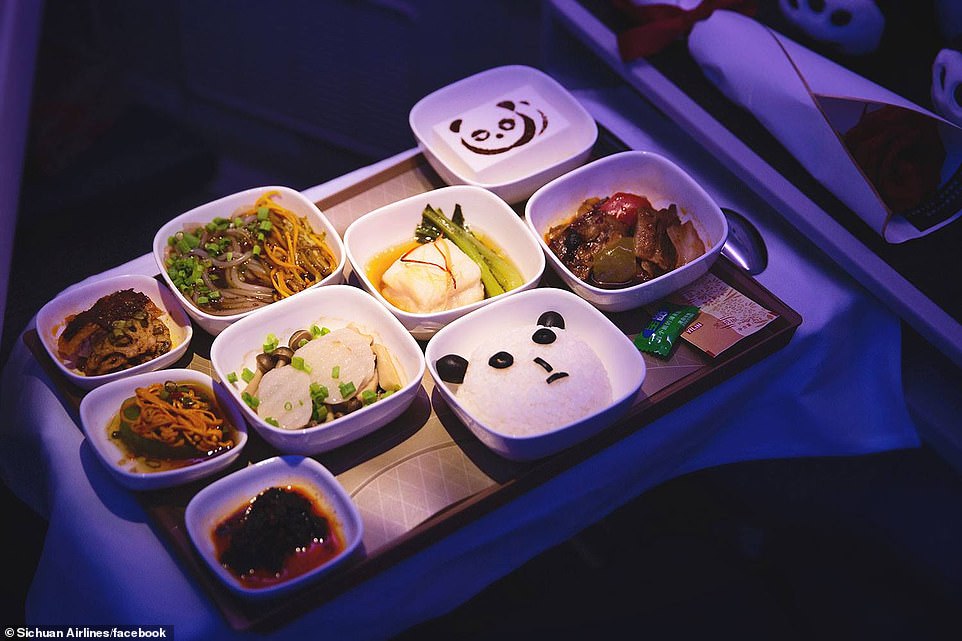 A meal to remember: Passengers are served with a panda-themed in-flight meal with iconic dishes from the city of Chengdu 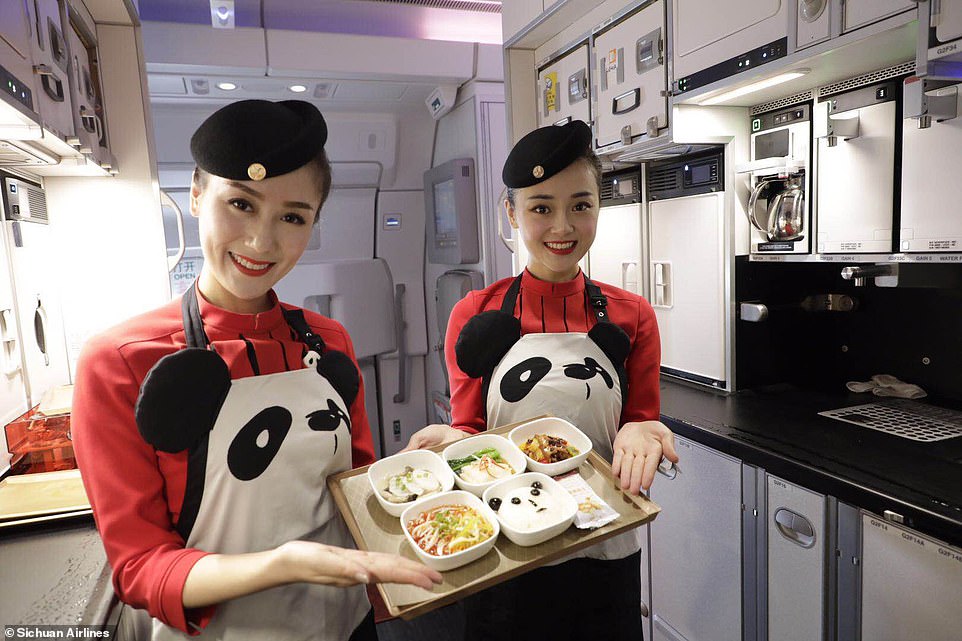 The adorable flight is operated by Sichuan Airlines from the province of Sichuan where pandas are original from.

Sichuan Airlines says it wants to offer a complete panda-inspired journey for its customers, from when they check in at the airport to when they open their meal box.

To begin with, passengers check in their flight and drop their luggage at a ‘panda’ airport counter manned by staff wearing panda-shaped hairpins and adorned with panda plush toys. 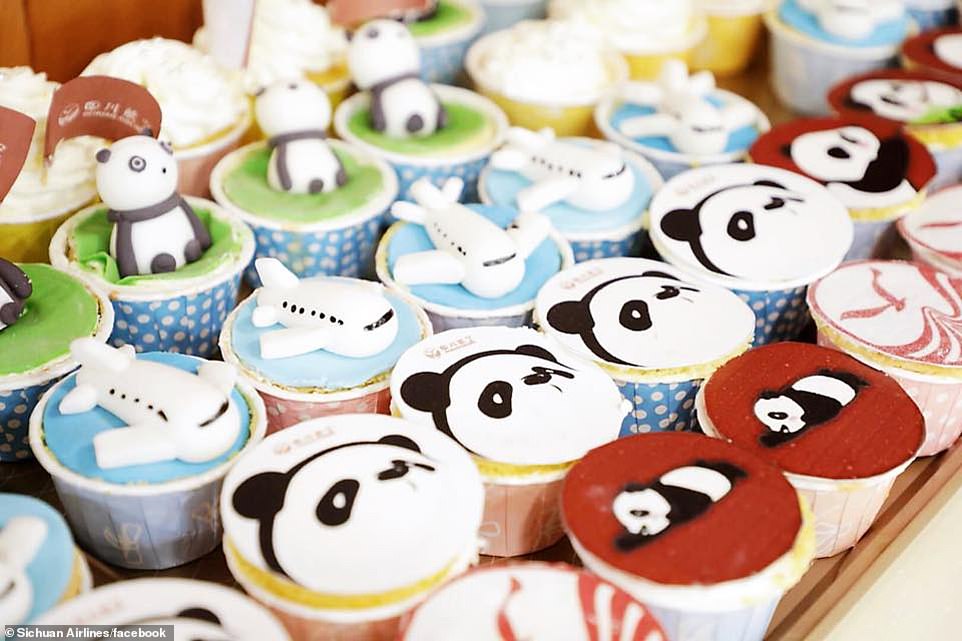 Have a sweet tooth? Travellers can also find cupcakes which carry cartoon images of pandas on the super cute flight 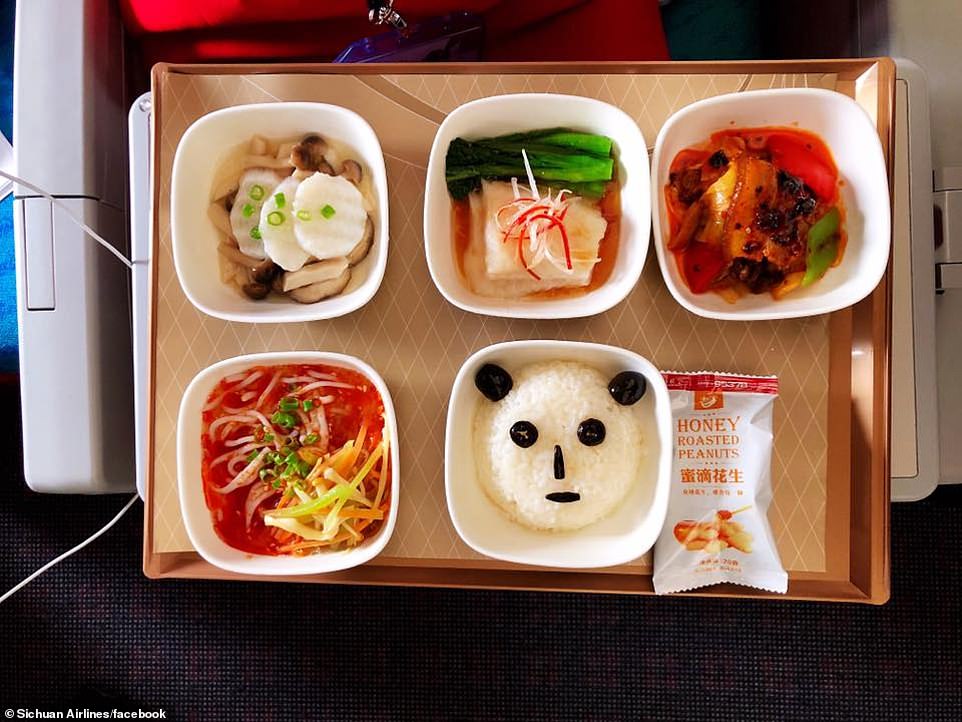 A feast 30,000 in the air: The flight’s meal is comprised of iconic dishes from Chengdu, a UNESCO City of Gastronomy 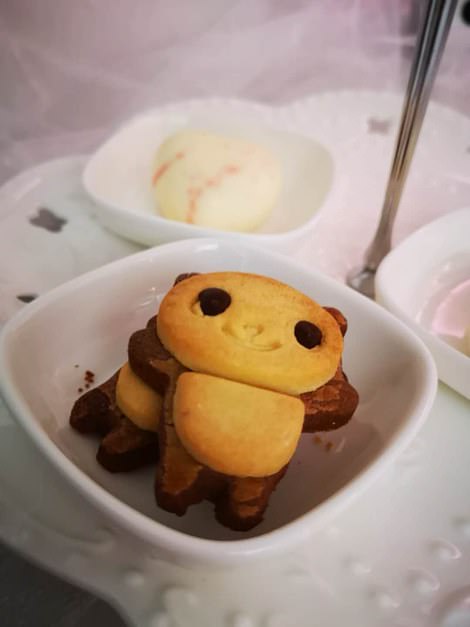 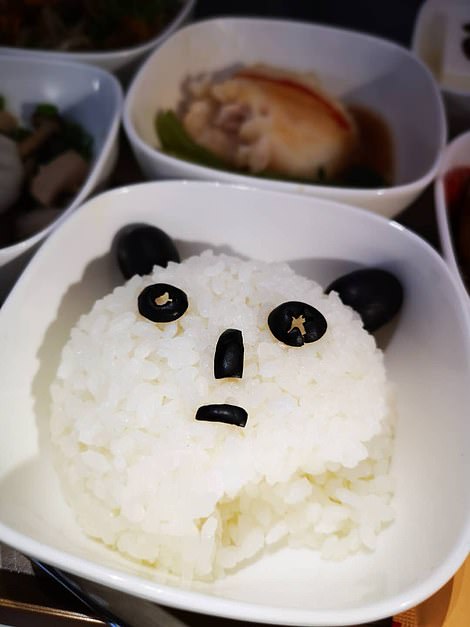 Too cute to bear: Biscuits and rice made to look like pandas on the flight by Sichuan Airlines are almost too adorable to eat 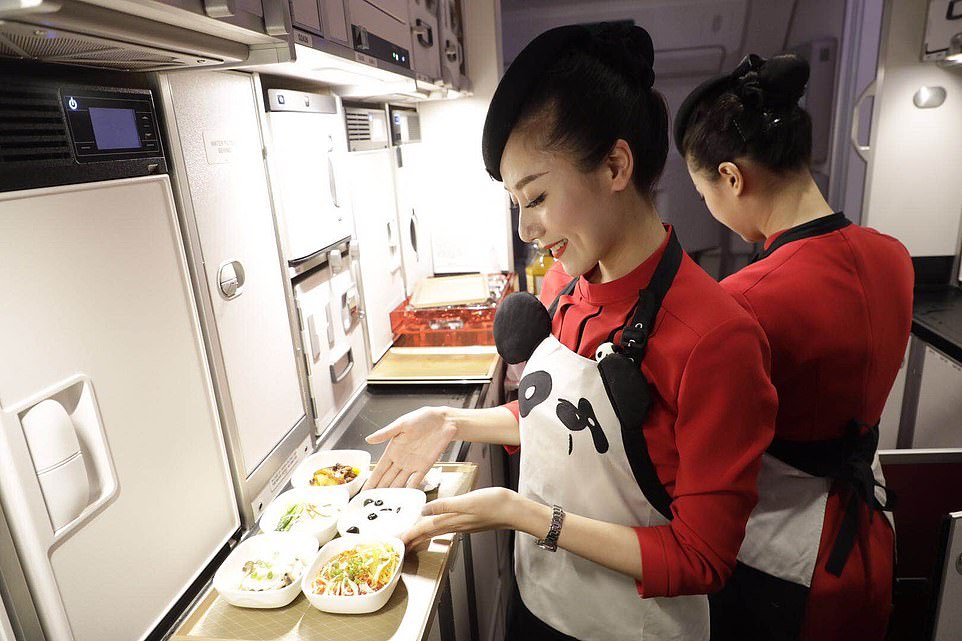 On their way to the airport gate, travellers can pop into a panda-themed lounge complete with panda-shaped cushion, or say hello to the airline’s workers wearing full-body panda suits.

The plane’s cabin is decorated with pictures of the three pandas Sichuan Airline has adopted from the Chengdu Research Base of Giant Panda Breeding.

The highlight of the flight is no doubt the meal. 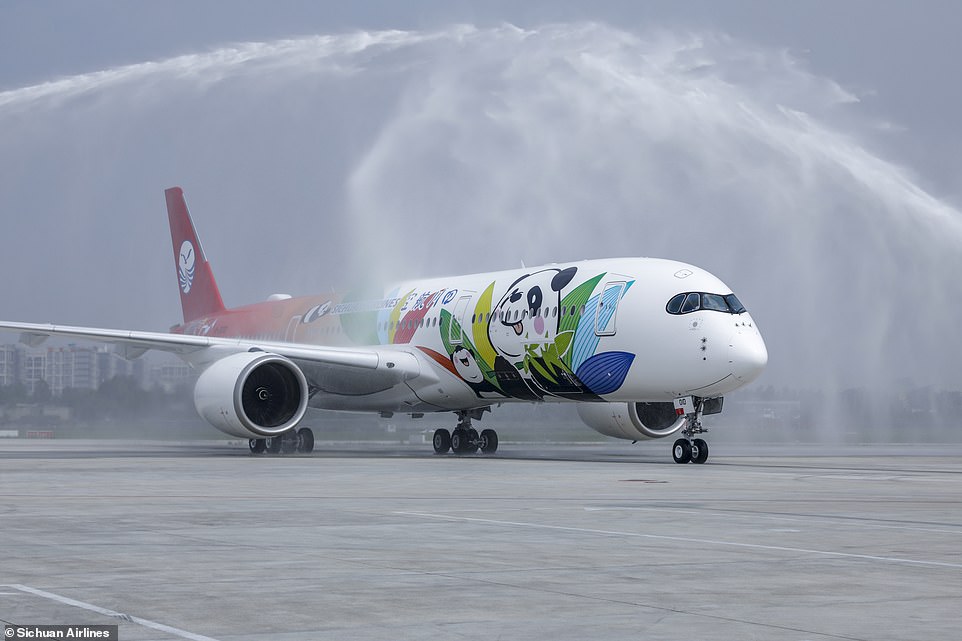 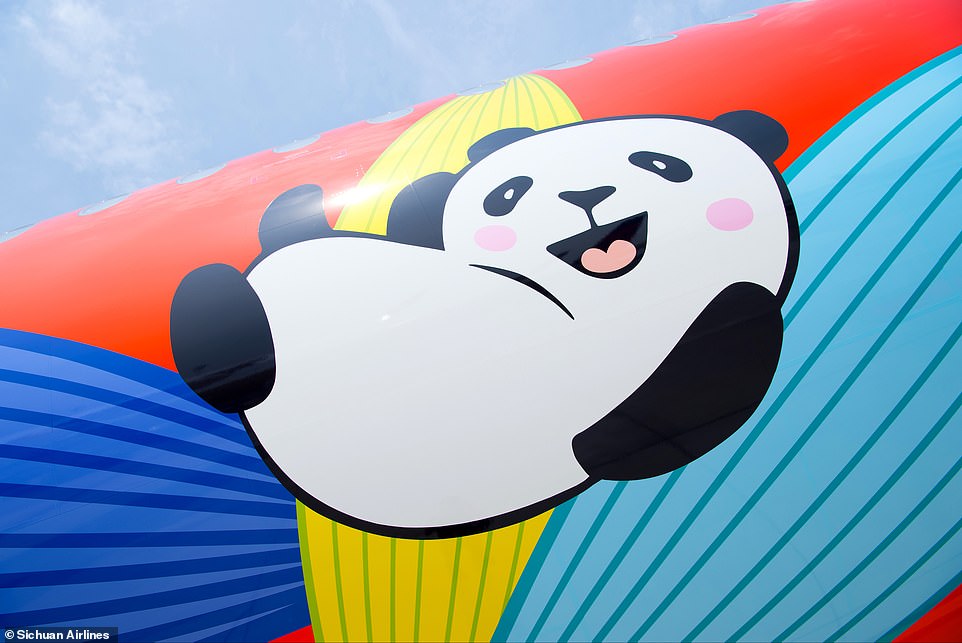 A very special plane: Passengers on the ‘Panda Route’ are transported by an Airbus A350 sporting cartoon panda livery 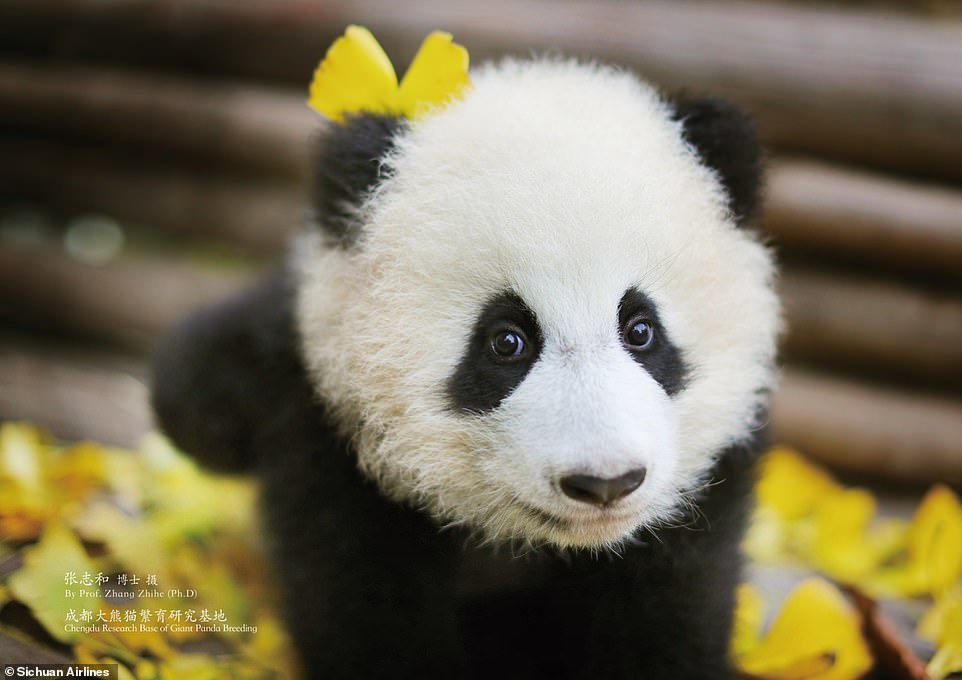 Meet little panda ‘3U’: Sichuan Airlines has adopted a panda from the Chengdu Research Base of Giant Panda Breeding

The bento box – served by flight attendants wearing panda-inspired aprons – is comprised of iconic dishes from Chengdu, a UNESCO City of Gastronomy, and even come with the image of a panda on its cover.

Imagine steamed fish, fried pork and cabbage, scrambled eggs, sweet and sour dumplings as well as a portion of rice made to look like a panda’s face.

The impressive in-flight meal is topped off by a panda-inspired cup cake, buscuits or steamed buns.

Sichuan Airlines says it plans to launch its first international ‘Panda Route’ next year between Chengdu and Boston in the United States. 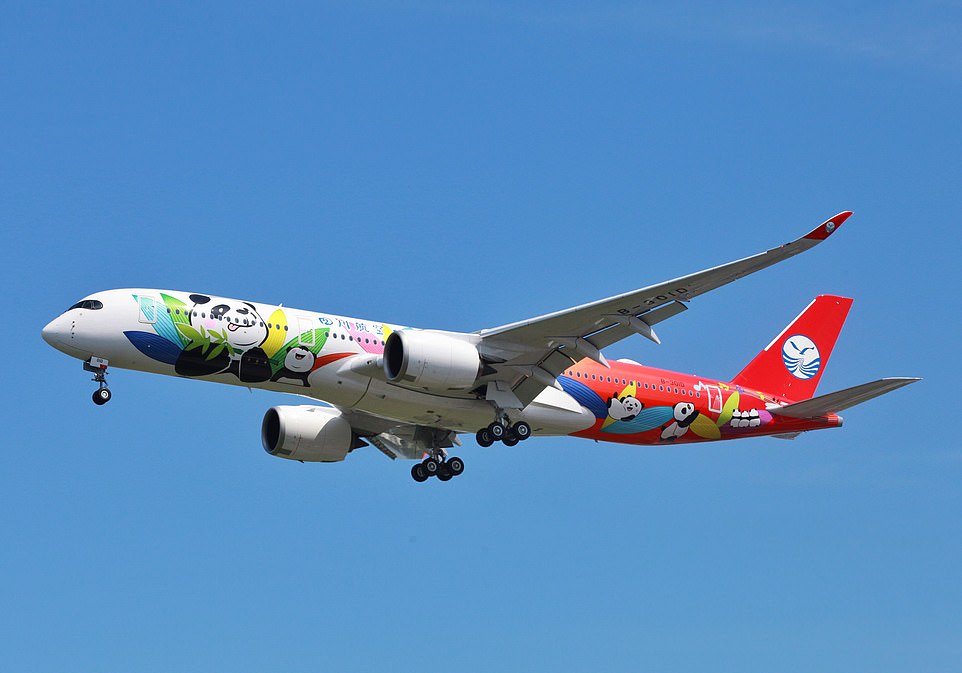 Sichuan Airlines plans to launch its first international ‘Panda Route’ next year between Chengdu and Boston in the U.S. 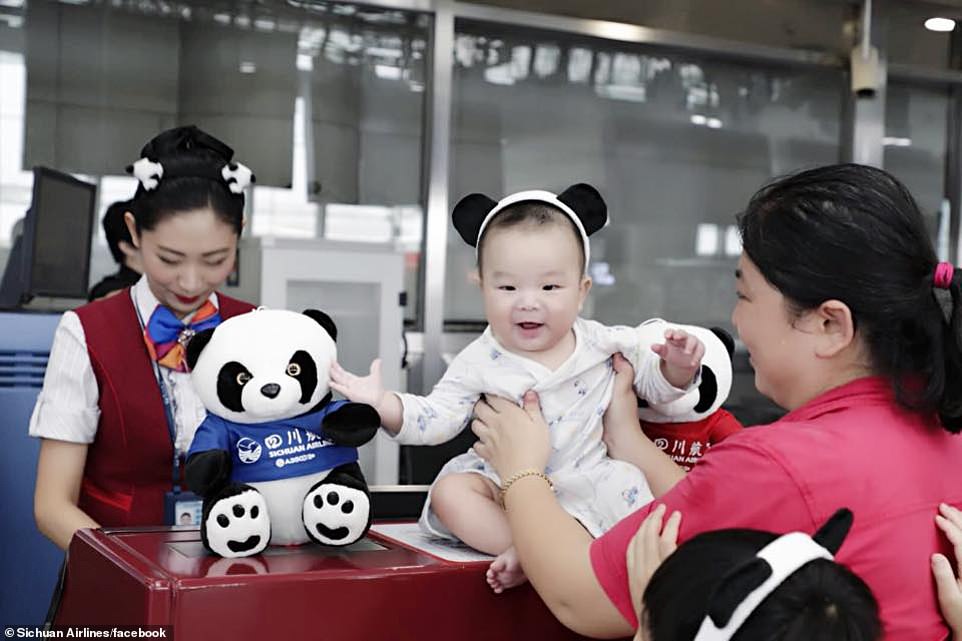 Happy start of the journey: A family is being served by a Sichuan Airlines employee at the airport who wears panda hairpins

The flight is a part of Sichuan Airline’s ‘Panda Route’ international flight development program, which was launched in 2016.

In July, Sichuan Airlines announced it had adopted a panda named ‘3U’ and nicknamed ‘You You’ as the programme’s official ambassador.

One of the eight pandas from the ‘Panda Route’ livery is inspired by ‘3U’, which was born in the Chengdu Research Base of Giant Panda Breeding on July 15 last year.

Commenting on the significance of the adoption, the General Manager of Sichuan Airlines Shi Zuyi said: ‘We’re excited to take this opportunity to introduce more people to Sichuan and pandas in a fun way.

‘Adopting pandas is one of our public welfare activities which supports the protection of endangered animals.

‘It is also a part of Sichuan Airlines’ commitment to protect Sichuan culture and to promote it to our international passengers and partners.’

The city of Chengdu, home to one of the largest panda breeding centres in the world, also has panda-themed subway carriages and sky trains. 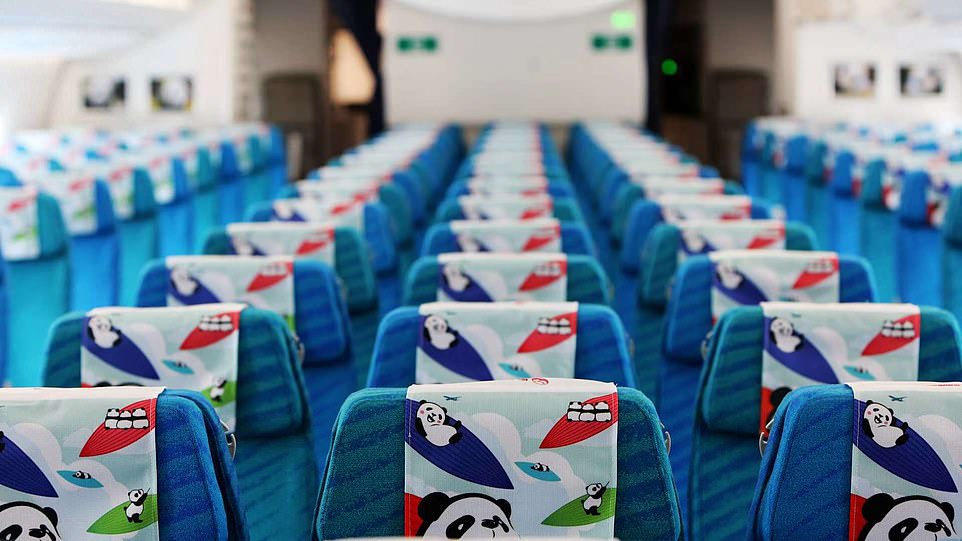 Pandemonium: Passengers can see images of pandas throughout the cabin of the Airbus A350 on the ‘Panda Route’ 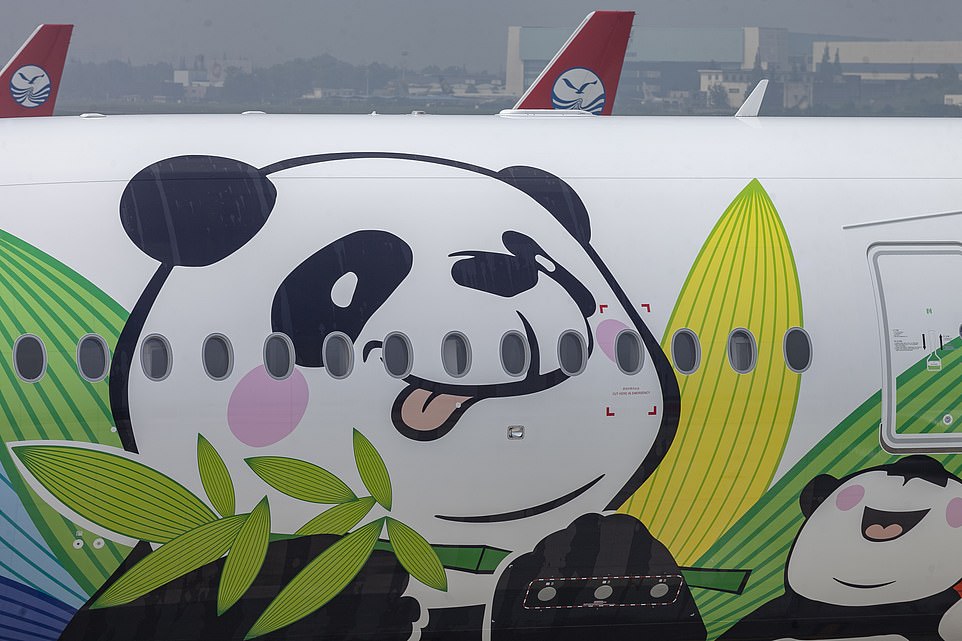