By Afp and Emilia Jiang For Mailonline

A cargo capsule that was part of China’s latest rocket test has experienced an ‘anomaly’ during its return trip, the space authority said on Wednesday.

The rocket launched yesterday also carried a new-generation prototype spaceship designed to send astronauts to the moon, which is due to return to earth on Friday safely.

China successfully launched its largest carrier rocket with a trial version of the country’s new spacecraft on May 5, marking significant progress for the country’s ambitious plan to put a man on the moon by 2030. 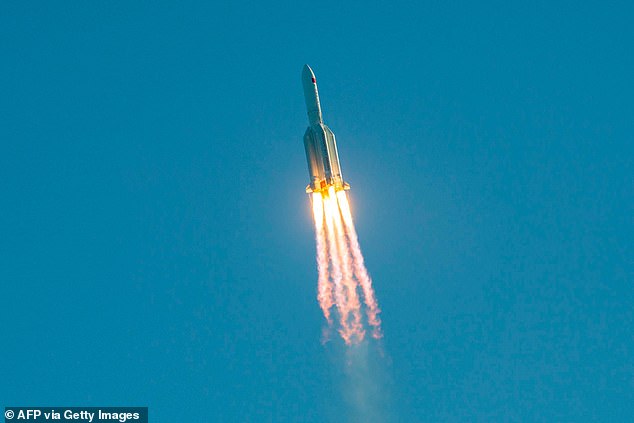 The carrier rocket – with a length of about 53.7 metres (176.18 feet) and takeoff mass of about 849 tonnes – was also carrying a recyclable cargo return module.

But ‘an anomaly occurred today during the return’ of the cargo capsule, the China Manned Space Agency said in a statement.

‘Experts are currently analysing the data,’ it said without offering details. 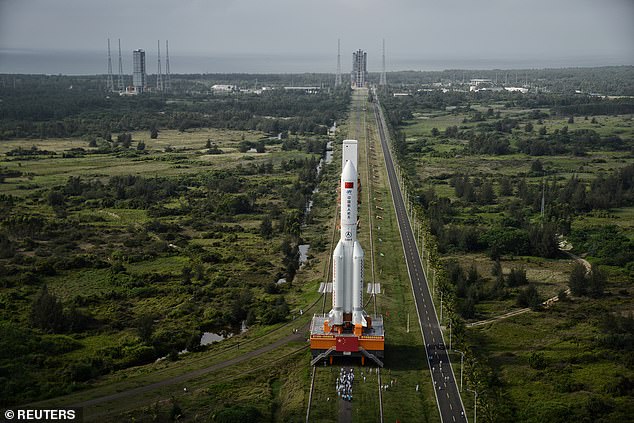 The rocket launched yesterday also carried a new-generation prototype spaceship designed to send astronauts to the moon, which is expected to safely return to earth on Friday

The cargo capsule was not designed to transport astronauts, only equipment. The device, developed by China Aerospace Science and Industry Corporation, is an experimental prototype.

The capsule was fitted with an ‘inflatable’ heat shield. This type of structure, also being tested by the American and European space agencies, aims to eventually replace the classic metal heat shields that are heavier and thereby reduces the amount of cargo that can be carried into space.

But the spacecraft carried by the rocket is is ‘working normally in orbit’, according to another statement from the space authority today.

The prototype vessel – designed for low-Earth orbit and deep space exploration – has enough room for six to seven astronauts, compared to three seats in the previous model, Chinese media report.

The spaceship is expected to one day transport astronauts to a space station that China plans to complete by 2022 – and eventually to the moon.

Tuesday’s launch was also the maiden flight of the Long March 5B rocket, considered the most powerful rocket made in China to date. State media said the launch was a ‘success’. 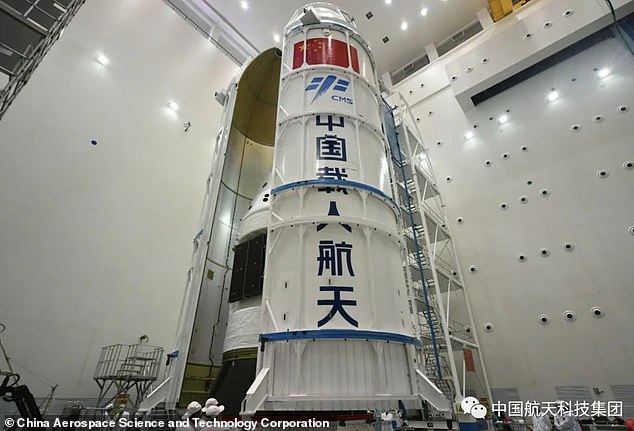 The spacecraft carried by the rocket is is ‘working normally in orbit’, according to an official statement from the space authority today. The picture shows the inside of the trial spacecraft 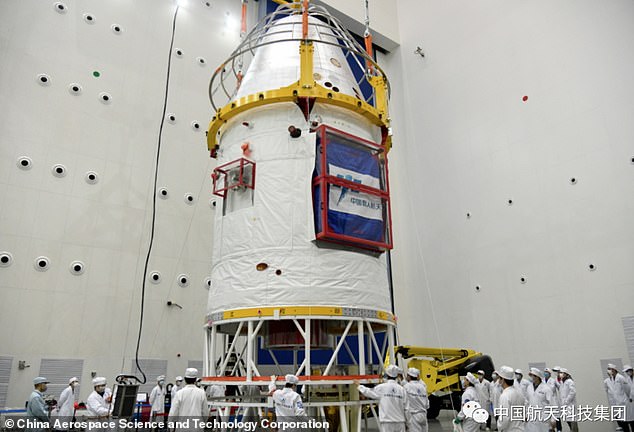 Tuesday’s launch was also the maiden flight of the Long March 5B rocket, considered the most powerful rocket made in China to date. The picture shows engineers working on the prototype spacecraft before it was launched

The country is also set to complete a multi-module, inhabited space station around 2022.

The rocket test came after two previous failures when the Long March 7A malfunctioned in March, and the Long March 3B failed to take off in early April.

Beijing has invested heavily in its space programme in recent years as it plays catchup to the United States, the only country to have sent a man to the Moon.

Assembly of the Chinese Tiangong space station, whose name means Heavenly Palace, is expected to begin this year and finish in 2022.

China also became the first nation to land on the far side of the Moon in January 2019, deploying a lunar rover that has driven some 450 metres so far.