Sanitation workers in a renowned Chinese mountain attraction have returned to what could be the world’s most dangerous cleaning job after a lengthy coronavirus shutdown.

With a hardhat, a harness and a rope, these so-called ‘spider-man cleaners’ need to collect garbage left by visitors on dangerous cliff faces in Zhangjiajie, south-western China.

Dizzying drone footage shows one such daredevil litter picker undertaking the highly risky task as he clung onto trees on a rock face at nearly 4,600 feet above the ground.

Footage shows sanitation worker Yang Feiyue clinging onto trees on a rock face at nearly 4,600 feet above the ground as he collected rubbish left by tourists on Tianmen Mountain

The video was taken on the Tianmen or Heaven’s Gate Mountain in Zhangjiajie when it welcomed tourists on May 1, the first national holiday in China since officials lifted quarantine restrictions.

A separate clip shows the cleaner, named Yang Feiyue, abseiling down the cliff with the help of a rope and a metal hook as he headed towards the area he was assigned to clean.

Yang’s daily job is to gather rubbish on a section of the cliff about 100 metres (330 feet) under a glass-bottomed walkway.

Yang and his colleagues have earned the nickname ‘spider-man cleaners’ for their remarkable ability of moving up and down high vertical surfaces at ease just like the fictional superhero. 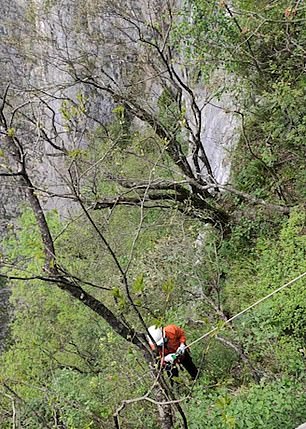 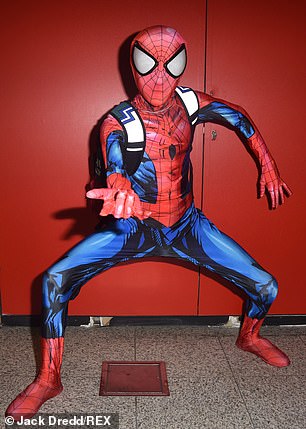 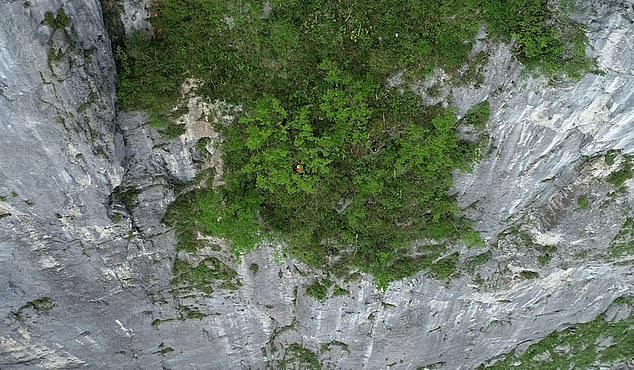 Yang job is to gather rubbish on a section of the cliff about 100 metres (330 feet) under a glass-bottomed walkway. The worker is seen gathering garbage on a vertical rock face in the video

The ‘Coiling Dragon Cliff’ skywalk snakes along the mountainside for 100 metres (330 feet) and is just 1.6 metres (5 feet) wide.

Opened on August 1, 2016, the cliff-side footpath gives tourists a clear view of the plunging valley on the other side of the barrier.

During this year’s Labour Day national holiday, which lasted from May 1 to May 5, a total of 53,819 people visited the Tianmen Mountain, according to official figures.

The number, however, is a far cry from the same period last year, which saw 49,000 visitors swarming to the scenic spot every day.

The Hunan government ordered all attractions in Zhangjiajie to limit the number of visitors to a maximum of 30 per cent its capacity.

Tourists had to book a specific timeslot to enter the park to allow social distancing. They also had to have their temperatures taken and use a government-approved app to show they don’t have the coronavirus before their entrance. 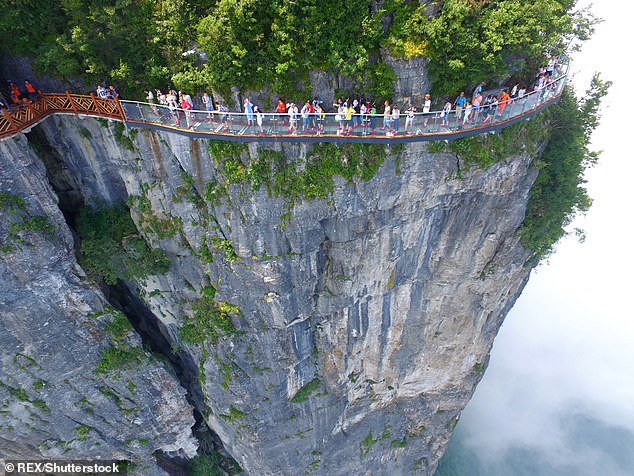 The ‘Coiling Dragon Cliff’ skywalk snakes along the mountainside for 100 metres (330 feet) and is just 1.6 metres (5 feet) wide. It is a popular tourist site in Tianmen Mountain, China

China has reported 4,633 deaths from the virus among 82,883 cases, but strict travel restrictions, testing, quarantining and case tracing policies appear to have stemmed the virus as warm weather arrives in much of the country.

The country’s National Health Commission reported two new infections and no new death on Wednesday. Officials said that both cases were ‘imported’ and discovered in the province of Shaanxi.

Besides, three more suspected cases, all imported from abroad, were registered in Shanghai, according to a statement from the commission.

As of Tuesday, there were 339 active cases across the country, including 26 patients who were in critical condition, but none of them was in the former epicentre Hubei province, the authority claimed.