Thousands of photographs, spreadsheets and classified documents hacked from Chinese police servers have shed a horrifying new light on the terrors Uyghur Muslims have been subjected to in ‘re-education camps’ and prisons in Xinjiang, as part of a state-sponsored campaign aimed at ‘breaking’ their cultural identity.

The treasure trove of data lays bare how more than 20,000 Uyghurs from just one county – Shufu – were imprisoned or interred in camps between 2017 and 2018 on spurious charges such as growing a beard or failing to top their phone up with credit, under the watchful eye of guards who were ordered to shoot escapees on sight.

Photographs show weeping detainees watched closely by officers clutching night-sticks, camp indoctrination sessions, and police armed with rifles, riot shields and clubs training how to subdue inmates who are shackled with hoods over their heads. Papers discuss the positioning of sniper and machine gun nests in the camps.

Combined with classified speeches in which top Communist Party officials say up to two million Uyghur are infected with ‘extremist thought’ and praise Xi Jinping for re-educating them, it blows apart the government’s official line that such camps are actually ‘schools’ that people are attending voluntarily.

Taken as a whole, the leak represents perhaps the largest and single-most revealing glimpse into a system of repression that the Chinese government tried to hide from the world, then lied about when challenged. It will also pile pressure on the UN over a fact-finding mission to Xinjiang that begins today, amid fears of state whitewashing.

Given the opportunity to denounce the leak as fake, the Chinese government did not – instead insisting the camps are ‘countering violent terrorism, radicalisation and separatism, [and are] not about human rights or religion.’

Authorities in Xinjiang have taken ‘a host of decisive, robust and effective deradicalisation measures,’ China’s US embassy said, and ‘the region now enjoys social stability and harmony as well as economic development.’

Hawagul Tewekkul, 50, a Uyghur woman detained for re-education in October 2017 for reasons that were not specified, is shown weeping in her official police portrait – despite China claiming that people attend the camps willingly 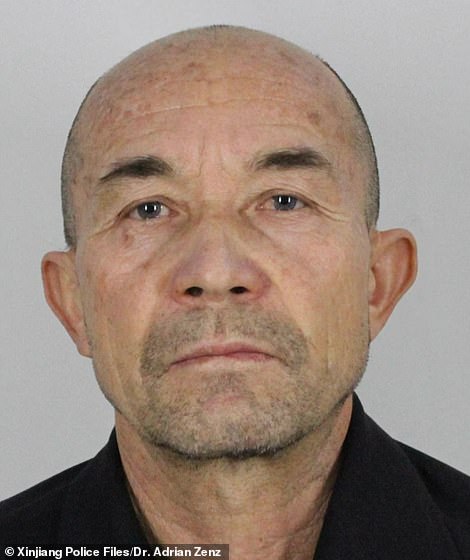 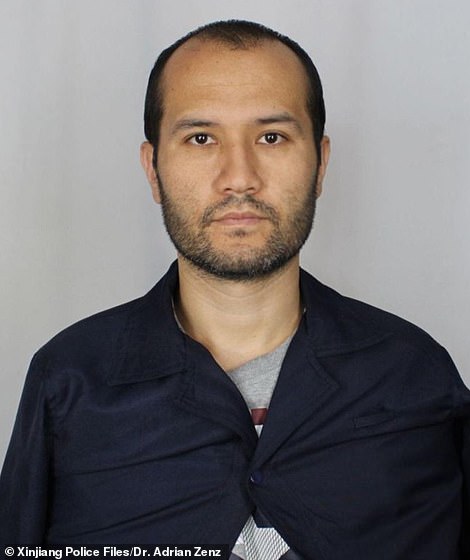 Tursun Kadir, 58 (left), was jailed for 16 years and 11 months for ‘growing a beard under the influence of religious extremism’, while Yusup Ismayil, 35 (right), was jailed in March 2017 for ‘travelling to a sensitive country’ 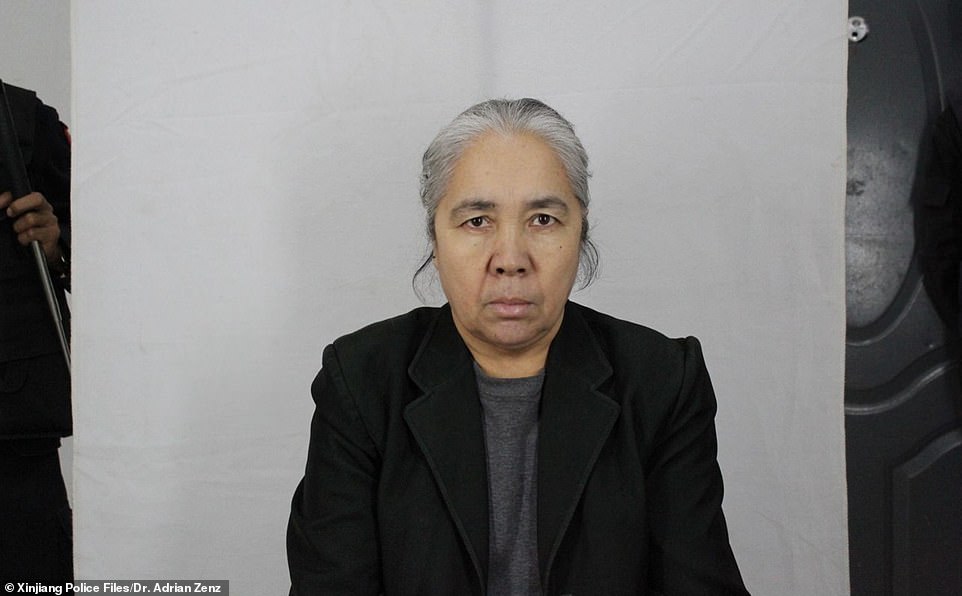 Tajigul Tahir, 60, was detained because her son was suspected of ‘strong religious leanings’ because he did not drink or smoke. Her photograph captures a baton-holding officer just over her right shoulder 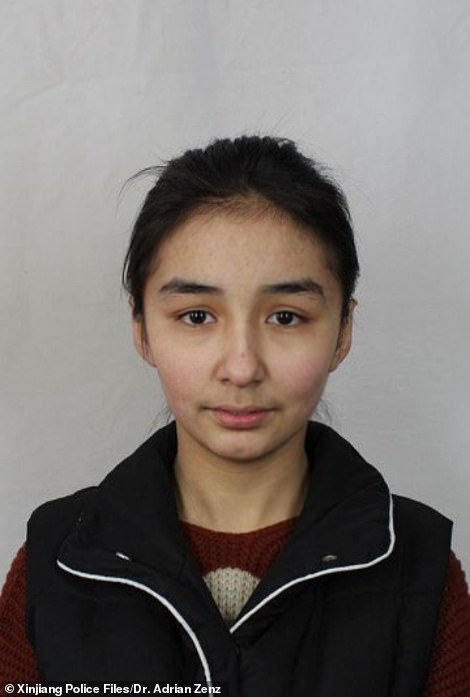 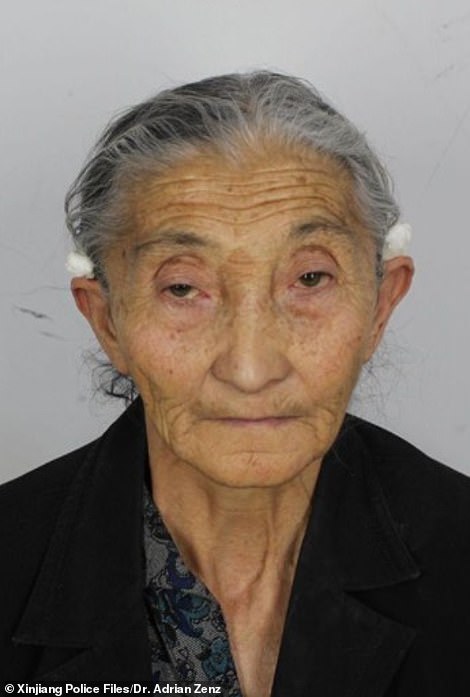 Rahile Omer (left) was the youngest to be included in the leaked documents, and was just 15 when she was detained. The oldest detainee was Anihan Hamit (right), aged 73

The documents were leaked by a hacker who claimed to have scalped them from Chinese police computer servers, downloaded and decrypted them before handing them to US-based academic Dr Adrian Zenz of the Victims of Communism Memorial Foundation, who has been sanctioned by China for his research on Xinjiang.

Dr Zenz then shared the documents with a consortium of journalists including the BBC who spent months verifying the information they contained, before publishing it on Tuesday.

The BBC says it has spoken with the hacker and has substantiated a large portion of the data they shared, but is unable to reveal any more information about the source due to fear of reprisals.

Among the trove of documents are 5,000 images of Uyghurs taken between January and July 2018, at least 2,884 of whom were detained in either prisons or re-education camps in the region – mostly in Shufu county.

The youngest was Rahile Omer, who was was only 15 at the time of her detention, while the oldest was 73-year-old Anihan Hamit.

Tursun Kadir, a 58-year-old who was an Islamic preacher for some time in the 1980s, was sentenced to 16 years and 11 months in jail for the crime of ‘growing a beard under the influence of religious extremism’.

Yusup Ismayil, 35, was jailed for travelling to a ‘sensitive country’ – reported by the BBC to be a Muslim-majority nation. Tajigul Tahir, 60, was locked up because her son was suspected of having ‘strong religious leanings’ because he didn’t drink or smoke.

Hundreds were targeted for listening to ‘banned lectures’ or installing encrypted apps on their phones by Chinese spies. Others were jailed for allowing their phones to run out of credit – accused of avoiding technology as a way of hiding their activities. Other charges include ‘picking quarrels’ or ‘disturbing the social order’.

Sentences often relate to supposed crimes carried out well before China launched its crackdown on the region in 2014, following two terror attacks by Islamic extremist separatists from Xinjiang.

One man was jailed for 10 years in 2017 for having ‘studied Islamic scripture with his grandmother’ for a few days in 2010.

Husband and wife Tursun Memetimin and Ashigul Turghun were sent to a detention centre in 2018 for having listened to a banned lecture on someone else’s mobile phone six years earlier, in 2012. Police files contain photos of two of their three children – daughters Ruzigul, 10, and Ayshem, six. Their fates are unknown. 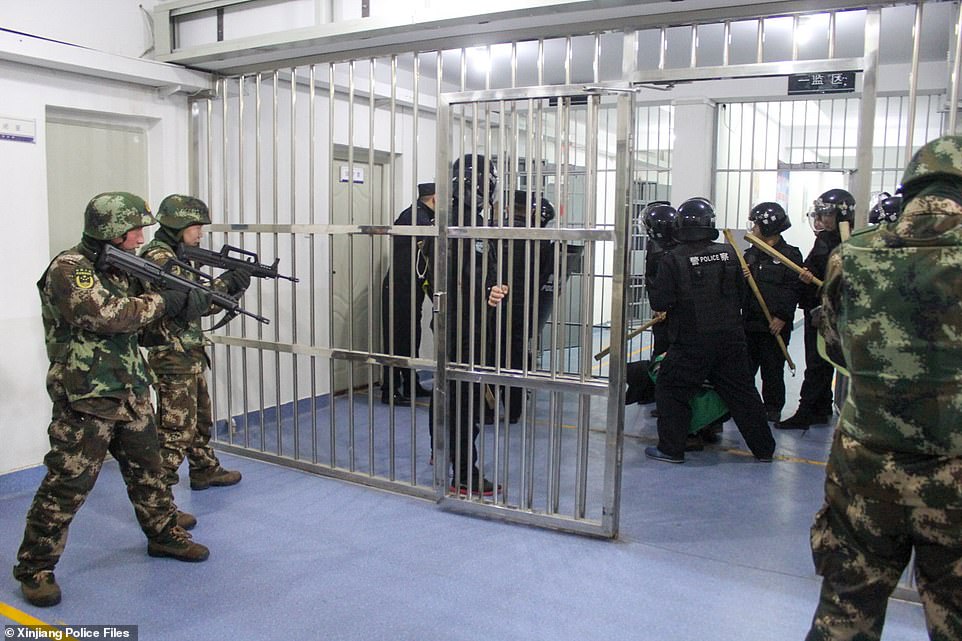 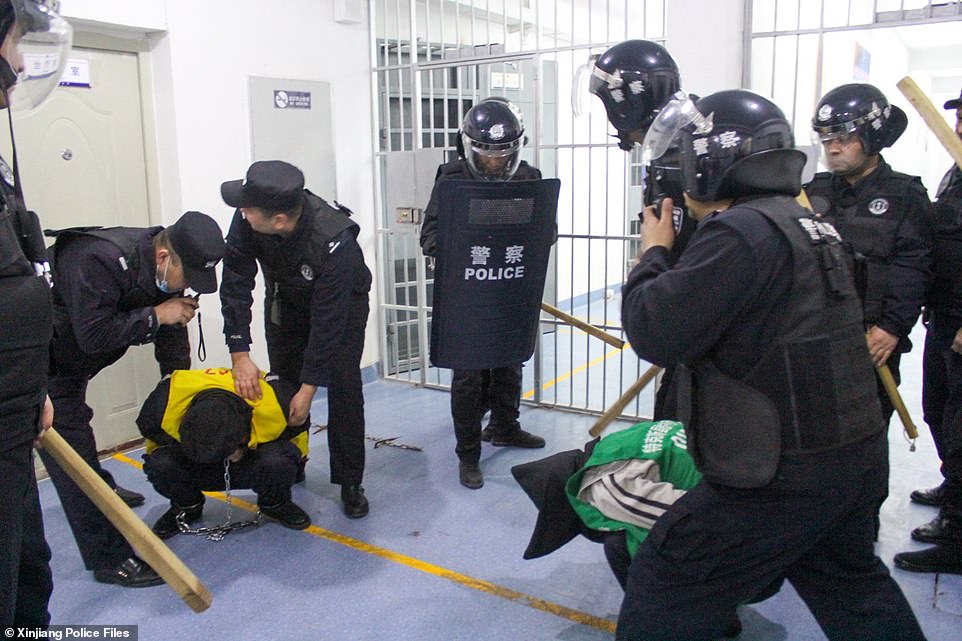 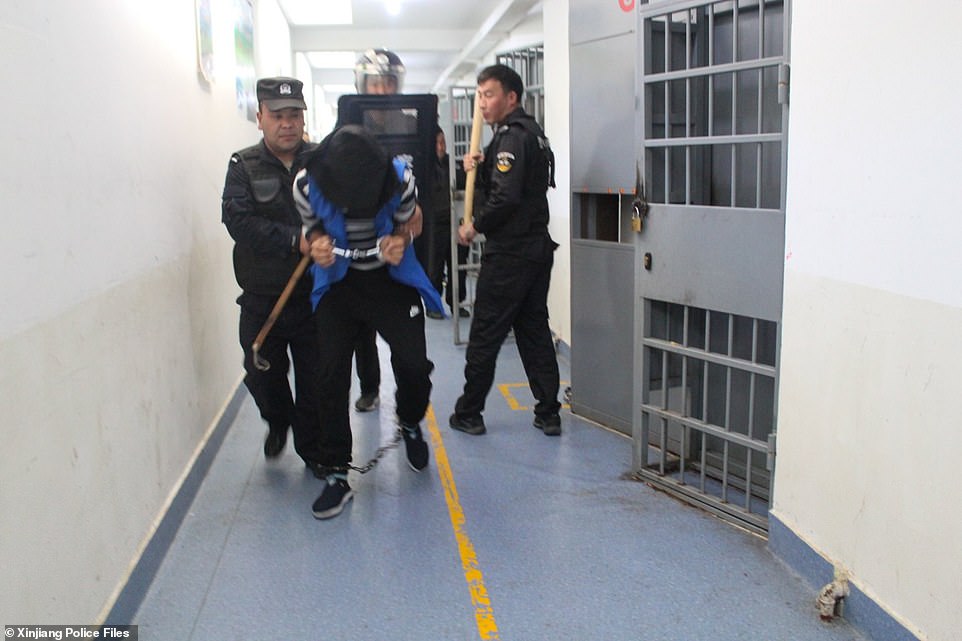 Police take part in training exercises at Tekes County Detention Center in Xinjiang, where Uyghur Muslims handed arbitrary sentences for minor crimes have been locked up 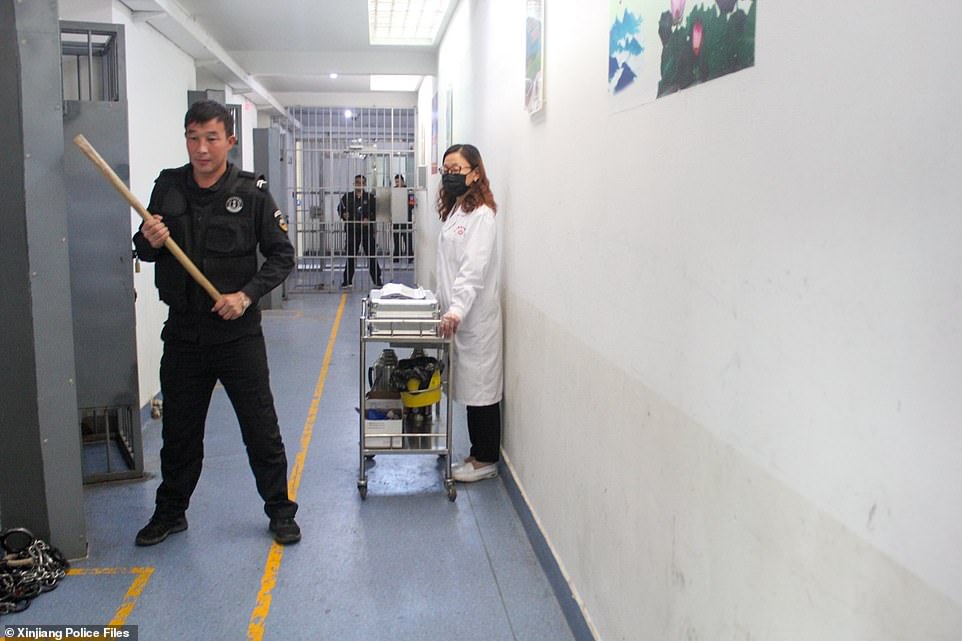 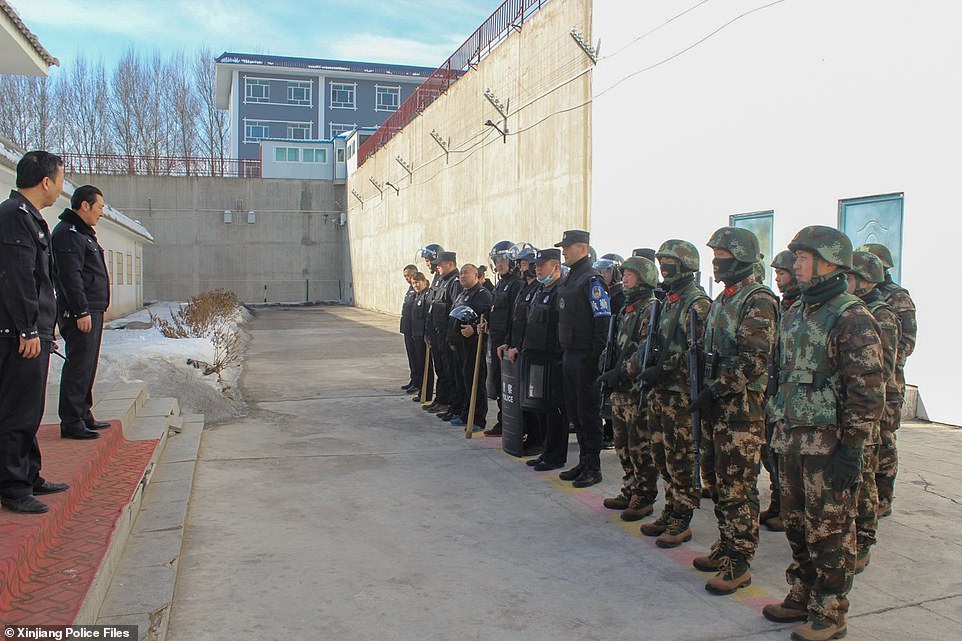 This image shows soldiers and police officers inside Tekes Detention Centre in northern Xinjiang, which was confirmed by buildings captured in the background of this photograph

Even those not detained were heavily surveilled. The trove contains the photographs of at least 2,116 people for whom no arrest record exists but were still hauled into police stations to be pictured – sometimes in the middle of the night. Many of those photos appear to have been used to train government facial recognition software.

Some 452 spreadsheets were also hacked containing the names, ID numbers and addresses of more than a quarter of a million Uyghurs being watched by the government.

And classified speeches by Communist Party officials seem to confirm what earlier leaks have suggested – that responsibility for the crackdown lies ultimately with Beijing and policies outlined by Xi Jinping himself.

One, delivered by Zhao Kezhi, China’s Minister for Public Security on a visit to Xinjiang in 2018, is filled with references to Xi – praising him for ‘important instructions’ and funding to build camps and detention centres to cope with an influx of detainees.

In another part of the speech, he suggests that up to 2million Uyghurs may harbour ‘extremist thought’ and are in need of processing in the camps.

A second speech given in 2017 by Chen Quanguo, Xinjiang’s hardline Communist Party secretary, suggests a five-year time-frame for the re-education mission though also admits ‘for some, even five years may not be enough.’

All the leaked documents date from 2018, thought to be because China changed the way it encrypted data around the camps in 2019 – perhaps putting them beyond reach of the hacker.

Beijing claimed the same year to be scaling down its use of the camps, though observers believe this is untrue.

The Australian Strategic Policy Institute says there are 380 suspected facilities in the Xinjiang region – some 40 per cent more than previous estimates – with more than 60 sites were worked upon between July 2019 and July 2020.

Fourteen camps were still under construction, the report said, indicating that China is still expanding their use.

Under pressure from world leaders – particularly in the US – to take action, UN human rights chief Michelle Bachelet arrives in Xinjiang today on a fact-finding mission.

Beijing says the visit will be a chance to ‘clarify misinformation’ about the camps, but critics fear it will simply provide the Communist Party with an excuse to peddle misinformation on a global stage – as it did with a much-criticised WHO report into Covid’s origins published last year. 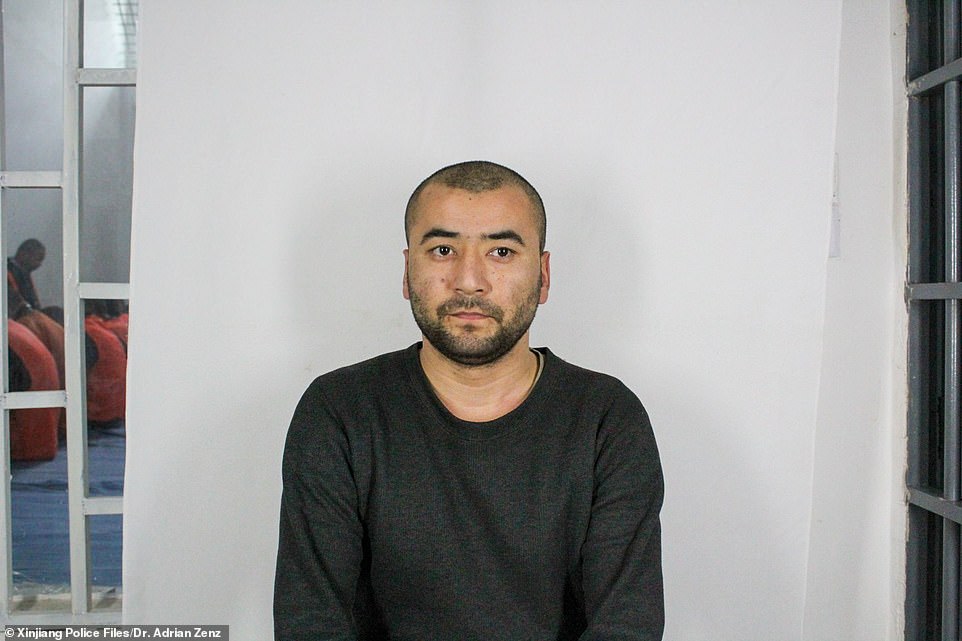 Other images capture what appear to be rows of detainees in Guantanamo-style prison jumpsuits sitting behind one of the photographed inmates, further undermining China’s claims that such camps are voluntary ‘schools’ 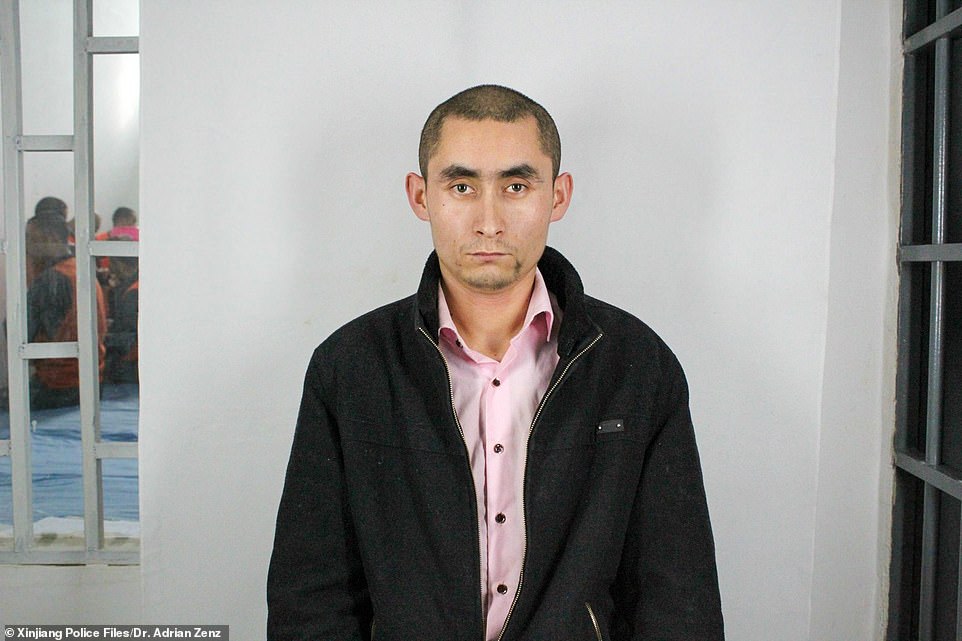 Another photo of one of the Uyghur detainees captures what appear to be jumpsuit-wearing inmates locked behind bars over his right shoulder, contrary to Beijing’s claims about the camps 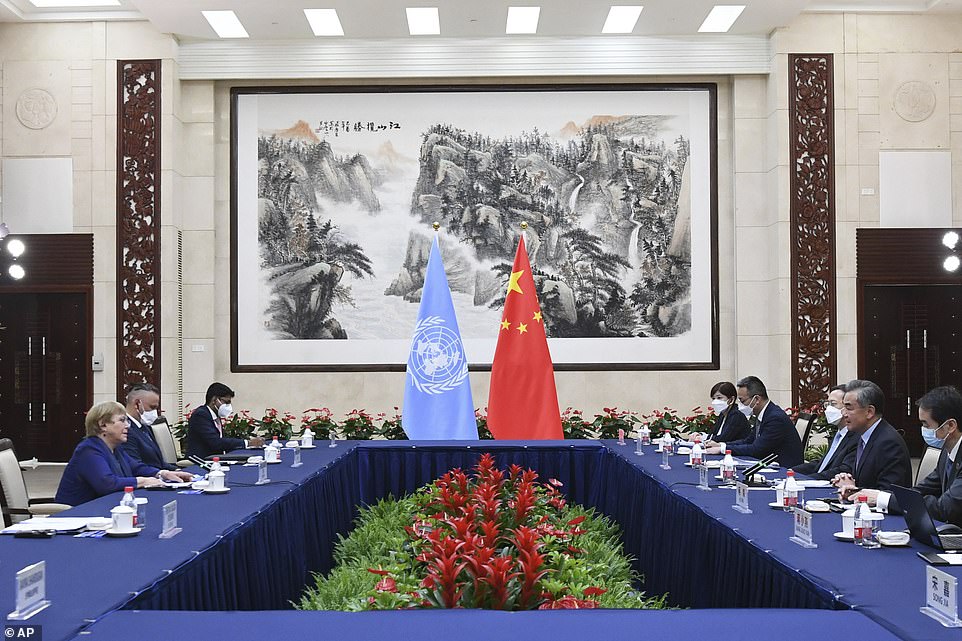 The leak will pile huge pressure on UN human rights chief Michelle Bachelet (left), who today begins a visit to Xinjiang on a fact-finding mission that many fear will be white-washed by the Chinese state (foreign minister Wang Yi, pictured right)

The ruling Communist Party is accused of detaining over one million Uyghurs and other Muslim minorities in the far-western region as part of a years-long crackdown the United States and lawmakers in other Western countries have labelled a ‘genocide’. China vehemently denies the allegations, calling them the ‘lie of the century’.

Bachelet is expected to visit the Xinjiang cities of Urumqi and Kashgar on Tuesday and Wednesday as part of a six-day tour. She met Foreign Minister Wang Yi ahead of her journey to Xinjiang, who also ‘expressed the hope that this trip would help enhance understanding and cooperation’.

But Uyghurs, the main victims of an alleged campaign of repression, raised doubts about her presence if her trip is as highly-controlled as expected.

Nursimangul Abdureshid, a Uyghur living in Turkey, said she was ‘not very hopeful that her trip can bring any change’. ‘I request them to visit victims like my family members, not the pre-prepared scenes by the Chinese government,’ she said. ‘If the UN team cannot have unlimited access, I will not accept their so-called reports.’

Another Uyghur, Jevlan Shirememet, called on Bachelet to help him contact his mother who he has not seen for four years. The Turkey-based 31-year-old – from the province’s northern reaches near the border with Kazakhstan – hoped Bachelet would venture further than her itinerary. ‘I don’t know why she can’t visit these places,’ he added.

It is home to a sizeable Uyghur community and was the site of deadly ethnic clashes in 2009 as well as two terrorist attacks in 2014.

Meanwhile, Kashgar – home to 700,000 people – lies in the Uyghur heartland of southern Xinjiang. 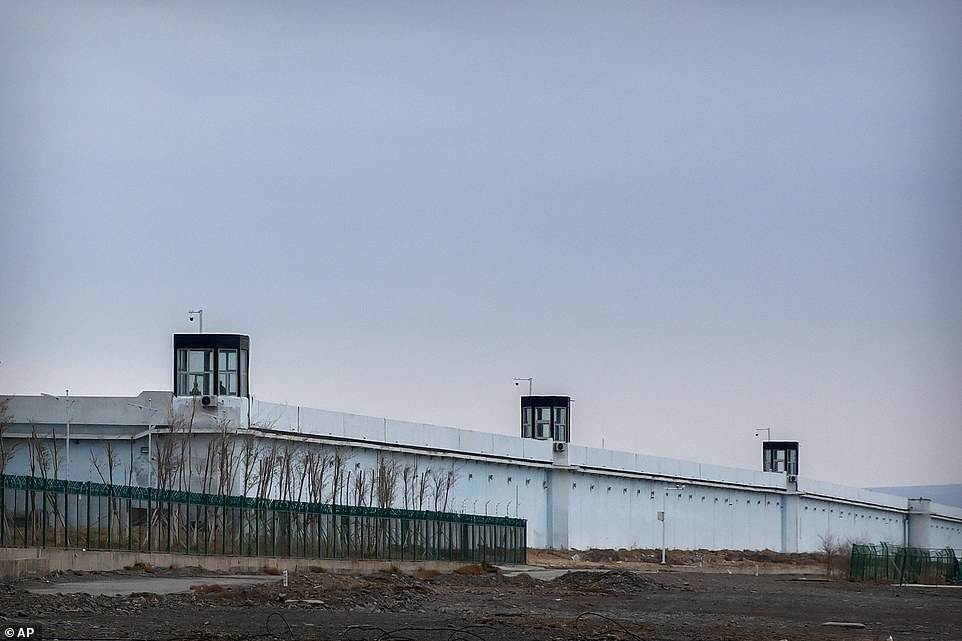 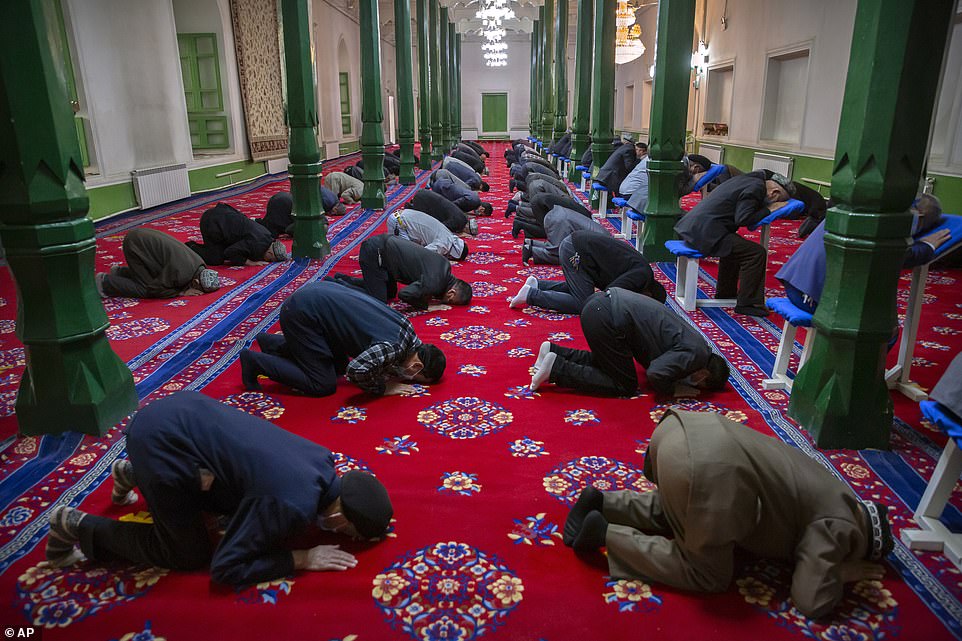 An ancient Silk Road city, it has been a major target of Beijing’s crackdown, researchers and activists say, with authorities accused of smothering the cultural hub in a high-tech security blanket while bulldozing Uyghur homes and religious sites.

The outskirts of both cities are pockmarked with what are believed to be detention camps, part of a sprawling network of recently built facilities stretching across the remote province.

Campaigners have voiced concern that Chinese authorities will prevent Bachelet from conducting a thorough probe into alleged rights abuses and instead give her a stage-managed tour with limited access.

The US has said it is ‘deeply concerned’ that she had not secured guarantees on what she will see, adding that she was unlikely to get an ‘unmanipulated’ picture of China’s rights situation.

Bachelet also gave assurances on her access to detention centres and rights defenders during a Monday virtual meeting with the heads of dozens of diplomatic missions in China, according to diplomatic sources in Beijing.

Caroline Wilson, the UK’s Ambassador to China, was on the call and said she stressed ‘the importance of unfettered access to Xinjiang and private conversations with its people’.

‘There is no excuse for preventing UN representatives from completing their investigations,’ Wilson wrote on Twitter.

Bachelet’s office has also said she will meet with civil society organisations, business representatives and academics.

In addition to mass detentions, Chinese authorities have waged a campaign of forced labour, coerced sterilisation and the destruction of Uyghur cultural heritage in Xinjiang, researchers and campaigners say.

Uyghurs overseas have staged rallies in recent weeks pressing Bachelet to visit relatives believed to be detained in Xinjiang.