A major city in north-eastern China has launched emergency disease-control measures to tackle COVID-19 amid fears of a new wave of coronavirus cases.

The authorities urged their residents to not leave the city unless there is an emergency as they scrambled to put hundreds under isolation and track down the close contacts of the infected. 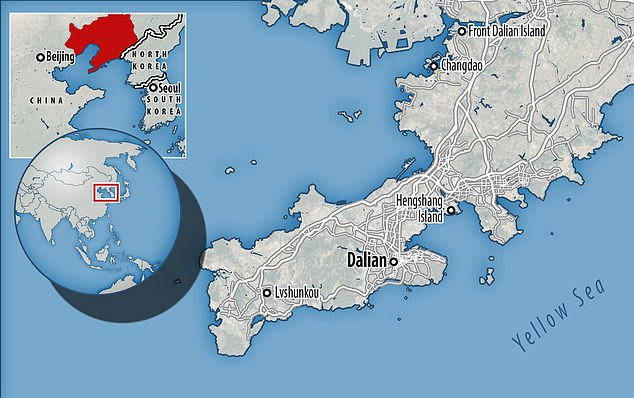 Dalian, a port city in north-eastern China has enforced emergency quarantine measures to prevent the coronavirus from spreading after seeing a new surge of fresh coronavirus cases

The announcement comes as China has been grappled with local coronavirus outbreaks that are erupting Xinjiang and Hong Kong.

The western Chinese region Xinjiang recorded 18 new COVID-19 patients today, bringing the total of active cases to 82 after an outbreak broke out in its regional capital, Urumqi, last week.

Meanwhile, Hong Kong´s daily coronavirus cases hit a record high of 118 on Thursday in a renewed wave of infections that has hit the city since the beginning of the month.

The financial hub now has a total of 2,250 confirmed infections, including 14 deaths.

The worker went to a hospital on Tuesday after developing fever symptoms. He tested positive for the coronavirus the next morning.

The other two infections were announced by officials today after they both tested positive on Wednesday.

Twelve asymptomatic cases were detected after the local government tracked down the first patient’s close contacts.

All three patients were said to have not travelled out of Dalian in the 14 days before they were diagnosed. They also didn’t have any contacts with coronavirus carriers. 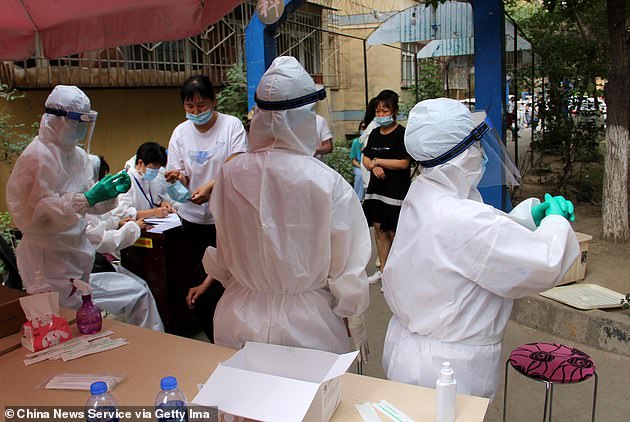 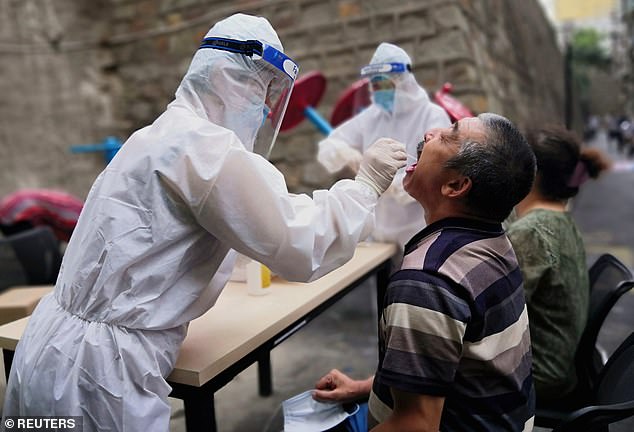 The western Chinese region Xinjiang recorded 18 new COVID-19 patients today, bringing the total of active cases to 82 after an outbreak broke out in its regional capital, Urumqi, last week. Pictured, a medic collects a swab sample from an elderly resident in Urumqi on July 19

It remains unclear how they contracted the bug as officials are conducting an investigation to identify the source.

The Dalian government activated an emergency response after registering the new cases.

The offices where the patients worked have been sealed off while their colleagues are being quarantined and tested.

Eighteen shops owned by the seafood processor, where the patient worked, are also closed.

Officials are conducting nucleic acid testing on nearly 200,000 residents in the districts where the patients live.

Nearly 600 people who had close contacts with the patients have been put under quarantine and receiving coronavirus testing. 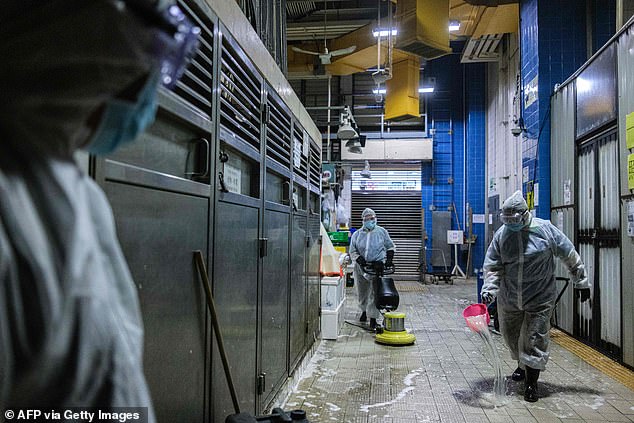 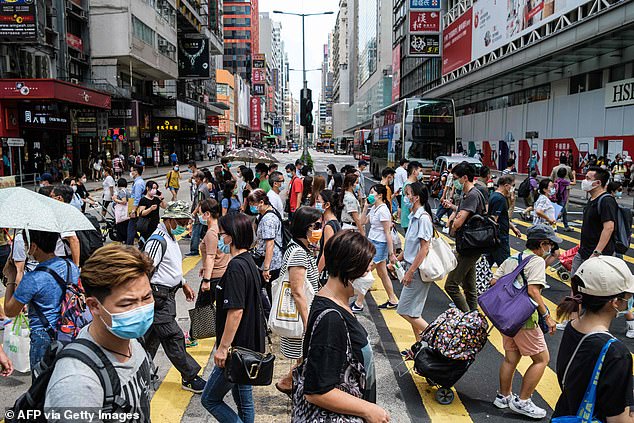 Hong Kong´s daily coronavirus cases hit a record high of 118 on Thursday in a renewed wave of infections. Pedestrians are pictured walking across a main road in Hong Kong on July 20

The authorities are also tracking down other residents who might have been in contact with the infected citizens and ordering them to self-isolate.

The government has urged Dalian residents not to leave the city until it is for emergency.

The news comes as China is battling a new spike of coronavirus cases across the country.

The officials recorded another five native cases the next day, prompting the government to impose ‘the strictest’ anti-virus measures.

The Hong Kong government has made masks compulsory on public transport and in public indoor areas following what officials called ‘a third wave’ of coronavirus infections.

Social distancing measures have also been tightened, with gatherings of more than four people banned. Gyms and amusement parks are shuttered, and restaurants can only operate at limited capacity.

As of Thursday, mainland China have reported a total of 83,729 confirmed infections. The death toll remains at 4,634.