A Chinese journalist has been arrested after slapping a Tory activist during a row over Hong Kong at party conference in Birmingham.

The female reporter, identified by China’s national broadcaster as Kong Linlin, accused speakers at a fringe event of being ‘liars’ and ‘traitors’.

Footage showed organisers wrestling with the 48-year-old woman as the altercation broke out last night.

She was eventually removed by security and and later arrested by police. A Conservative Party spokeswoman said her conference pass had been stripped.

However, the Chinese Embassy in London has demanded an apology, insisting the journalist had ‘simply raised a question’ and the way she had been treated was ‘puzzling’ and ‘completely unacceptable’. 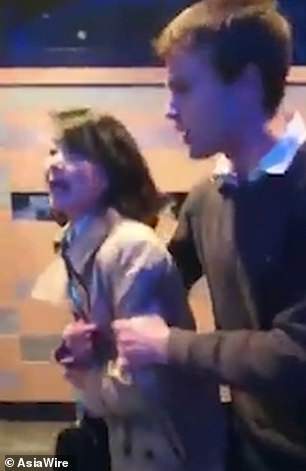 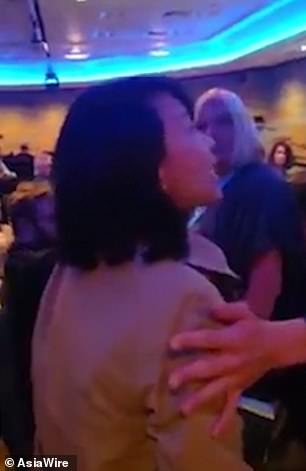 Staff at the conference had to hold back the woman before police arrived at the scene. The 48-year-old journalist was arrested on suspicion of common assault and held overnight

The incident took place at a fringe event about Hong Kong at the ruling Conservative party’s conference yesterday afternoon.

It was co-hosted by Hong Kong Watch, a British-based organisation which promotes human rights in Hong Kong, as well as the UK Conservative Party Human Rights Commission.

A video posted by Hong Kong Watch on its Facebook page showed the China Central Television (CCTV) reporter heckling at the event and then apparently slapping one of the staff.

Enoch Lieu, a party activist helping at the event, told AFP she slapped him twice after he had asked her to leave for shouting at one of the speakers and accusing him of being anti-China.

‘I stood in front of her and said can you please go, trying to show her the way out. Then out of the blue she slapped me in the face,’ said the 24-year-old, who was born in Hong Kong but schooled in Britain.

‘I was obviously very shocked, as I was merely trying to escort her out… I didn’t touch her.’

Mr Lieu had been helping to hand out flyers, taking photographs and recording the event for its Facebook Live page beforehand. 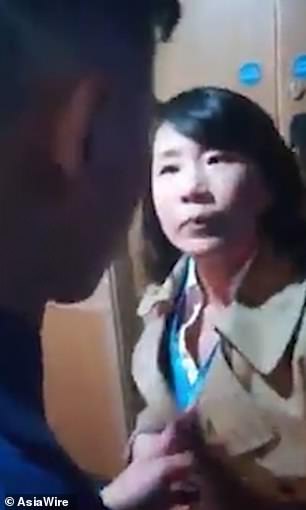 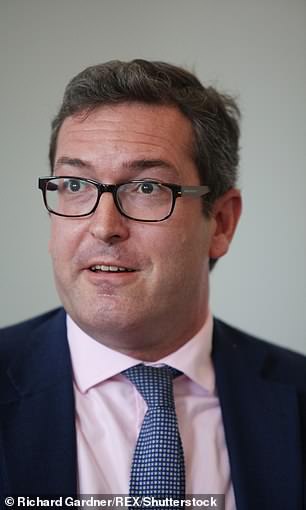 The woman said British campaigner Benedict Rogers was a liar and other staff at the meeting were ‘traitors’. Mr Rogers (right), Chair of Hong Kong Watch, was speaking at the conference

The woman is said to have become enraged after Benedict Rogers, Chair of Hong Kong Watch, made a speech.

Mr Rogers, who also serves as Deputy Chair of the Conservative Party Human Rights Commission, said Beijing and London should honour their commitments under the Sino-British Joint Declaration and ensure that Hong Kong’s ‘one country, two systems’ would be upheld.

He also said he was ‘pro-China’ not ‘anti-China’.

The Chinese journalist then apparently started screaming at Mr Rogers: ‘You are a liar. You are anti-China. You want to separate China. And you are not even Chinese. The rest are all traitors!’

‘There was a great sense of unity and sympathy for our speakers, for the volunteer who was assaulted, and for the people of Hong Kong, as well as a sense of shock that this woman behaved in this way,’ a spokesperson told MailOnline.

West Midlands police confirmed the woman was arrested on suspicion of common assault and held overnight.

The force said today: ‘The woman has been released from custody and investigations continue.’

‘It’s an absolute assault to British democracy – right in the middle of the Conservative party conference,’ he said.

But the Chinese embassy posted on its website in English saying her ejection was ‘completely unacceptable’.

‘In a country that boasts freedom of speech, it is puzzling that the Chinese journalist should encounter obstruction in such a way and even assault at the fringe event when she simply raised a question and expressed her opinions,’ it said.

‘The organizer of fringe event should apologise to the Chinese journalist,’ the embassy added. 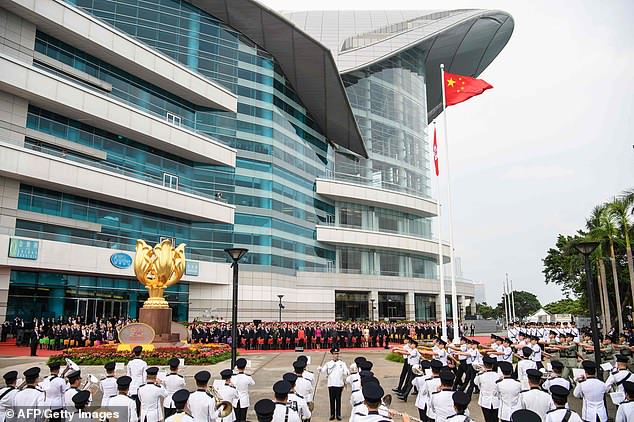 Hong Kong holds a flag-raising ceremony as part of China’s National Day celebrations at Golden Bauhinia Square on Monday. The former British colony is an autonomous city in China

In a statement today, China Media Group said reporter Kong Linlin from its affiliated China Central Television ‘was blocked and assaulted when she raised a question and expressed her opinion’.

It quoted a CCTV spokesperson saying it was ‘unacceptable’ and called for an apology from organisers, urging British police to ‘protect her legitimate rights’.

Asked if the party planned to apologise, a Conservative Party spokeswoman said: ‘The individual concerned was removed from the conference centre and has had their pass revoked’.