A hugely popular Chinese salesman was taken offline during the middle of a show for a sales stunt with an Australian dessert – and he hasn’t been seen since.

Austin Li, also known as the ‘Lipstick King’ for selling 15,000 lipsticks in five minutes on a livestream, was hosting a sales event on the Taobao e-commerce site on June 3.

The marketer with millions of followers did a stunt involving a Viennetta, recently named Australia’s favourite nostalgic dessert, 40 years after its launch in 1982.

The sudden end to Li’s show came after his crew presented him with the cake that had chocolates added to it in a way that resembled a tank.

The stunt, whether or not it was intentional, put his stellar sales career – he once sold $2.2 billion worth of goods in a single show – in jeopardy.

Austin ‘Lipstick King’ Li, pictured getting his hair done for a show, has disappeared from the internet in China after a sales pitch took a wrong turn

With traffic building on his Taobao live stream, one of Li’s staff presented the Viennetta decorated with Oreo cookies, a Ferrero Rocher and a chocolate roll.

The overall effect meant the simple treat now looked a little bit like a tank, and random tank images are not welcome in China in case they are a veiled reference to the 1989 Tiananmen Square Massacre.

On June 3, 1989 – Li’s show was on the 33rd anniversary – thousands of armed troops and hundreds of armoured military vehicles entered Beijing city centre.

The next day, soldiers shot at the protesters and ruthlessly crushed the uprising. Estimates of the death toll vary from several hundred to several thousand.

The Chinese government is particularly sensitive to any use of the famous photo of a man standing in front of tanks on June 5, 1989 during the student-led protest.

The photo is banned in China, as is anything that may even be alluding to it. 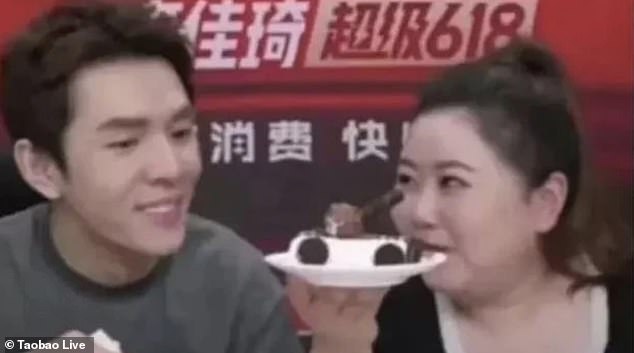 Chinese e-commerce star Austin Li (left) is pictured beside one of his staff presenting a Viennetta ice cream done up to look like a tank, or at least that’s what Chinese censors thought it was

What happened in the 1989 Tiananmen Square Massacre?

April 1989 – people from across China gathered in Beijing’s Tiananmen Square to mourn the death of the liberal Communist party leader Hu Yaobang and share their frustrations about the slow pace of promised reform.

May 13 – hundreds of student protesters went on hunger strike in order to push for talks with Communist party leaders. An estimated one million people joined the protests in Beijing.

May 20 – martial law was declared.

Soldiers shot at the protesters. Estimates of the death toll vary from several hundred to several thousand.

As fans – most of whom have no idea what happened in Tiananmen Square more than three decades ago – wondered what happened, Li, 30, posted an apology.

Using Chinese social media site Weibo, he initially said his team was ‘having a technical issue’. A follow up post announced the live event was over.

After being an almost daily presence in their lives for five years, Li’s millions of fans have not heard from him since.

His name could still be searched on China’s social media, but the photo of him holding the Viennetta tank is censored on Weibo.

Eric Liu, a former Weibo censor who now lives in the US, said Li’s censorship is a ‘normal reaction’ over the 1989 massacre.

‘There is a very strict censorship system especially about Tiananmen protests,’ Mr Liu told the ABC.

‘If you post something that can be related to Tiananmen, such as a candle emoji between the night of June 3 and June 5, the post will be removed, and your account will be suspended.’

Though he had previously proven popular with the Chinese Communist Party for his work ethic and great success, Li’s disappearance showed no one is immune to state censorship.

But making a very big deal out of an ice cream cake may have backfired on Beijing.

The censorship of Li has made young Chinese people wonder why it happened and what was behind it.

Many of his fans were not even born when the Tiananmen Square Massacre happened.

The sudden disappearance of one of their heroes could be the catalyst for them to find out about a very dark chapter in their country’s history. 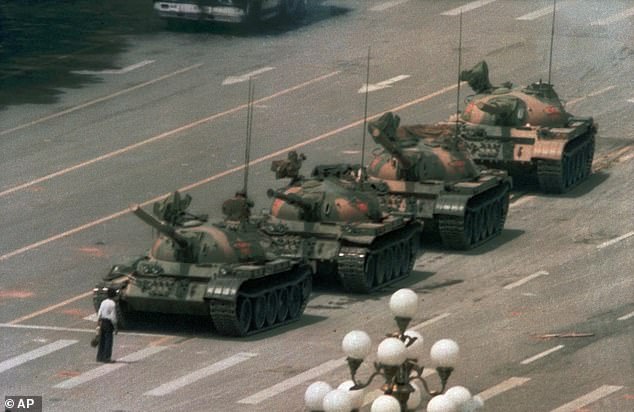 A man stands alone to block a line of tanks in Tiananmen Square, Beijing on June 5, 1989