A Chinese pensioner has lived with a giant growth of fat around his neck and shoulders for more than two decades.

Doctors believe the man’s love of alcohol is the cause of the rare condition, which has seen his neck swelling to twice its normal size.

The 68-year-old man, surnamed Tan, told the Chinese media that he drank at least one litre of strong Chinese rice wine every day between the ages of 40 and 66 and he drank it ‘like water’. 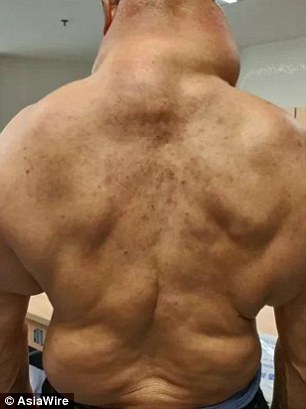 Mr Tan, from China, has lived with a huge growth around his neck and shoulders for more than 20 years (left). The lump has kept growing bigger and has caused pain to his upper body (right)

Mr Tan went to the Hunan Provincial People’s Hospital in Changsha in February after suffering breathing difficulties thought to be caused by the huge lump.

WHAT IS A LIPOMA?

A lipoma is slow-growing, benign growth of fat cells. It is found right under the skin.

A lipoma moves around easily with slight pressure. It is not cancerous and treatment generally is not necessary.

If the lipoma is on a pressure-bearing area, it may create discomfort and this is when people seek removal.

People also request removal because they don’t like the appearance of these bumps.

Often a small incision can be made over the lipoma and they can be ‘popped’ out easily.

He was diagnosed with Madelung’s Disease, a rare disease characterised by a benign growth of fatty deposits, known as lipoma, around a patient’s neck and upper body.

Mr Tan, from Xiangxiang, central China’s Hunan Province, said he first noticed small fatty lumps developing on his upper body in 1997, and by 2011 his neck had swelled to its current state.

He visited doctors about the condition but was told not to worry unless the lumps started to affect his breathing.

By the end of 2017, the lipoma began restricting his airway and also caused him pain, Mr Tan said.

According to China News, he started drinking a litre of Baijiu a day when he was 40 years old and carried on the habit for 26 years. He said he quit alcohol in 2016.

Baijiu, also known as white liquor, is a type of super strong Chinese alcohol and contains 52 per cent alcohol by volume on average. 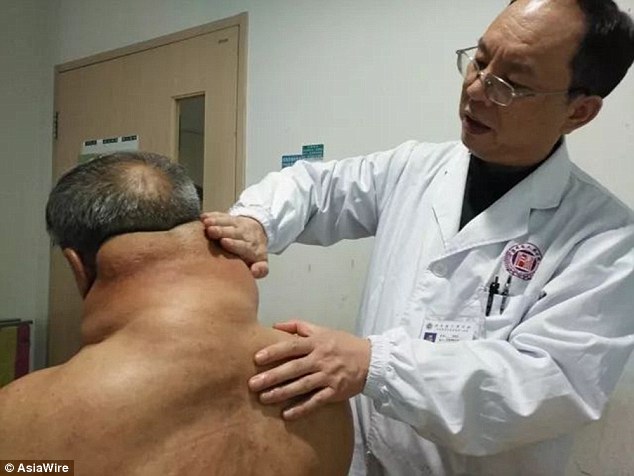 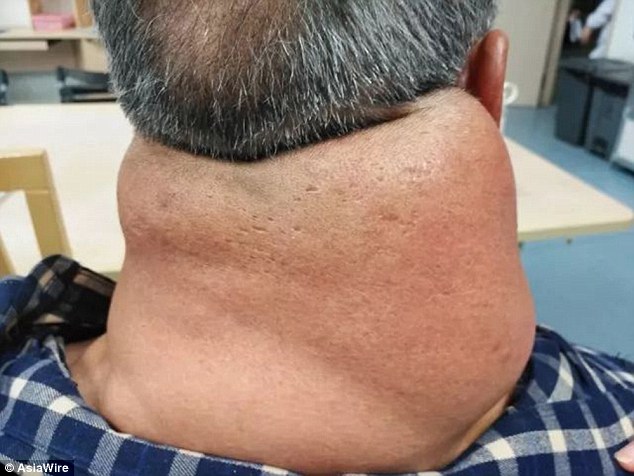 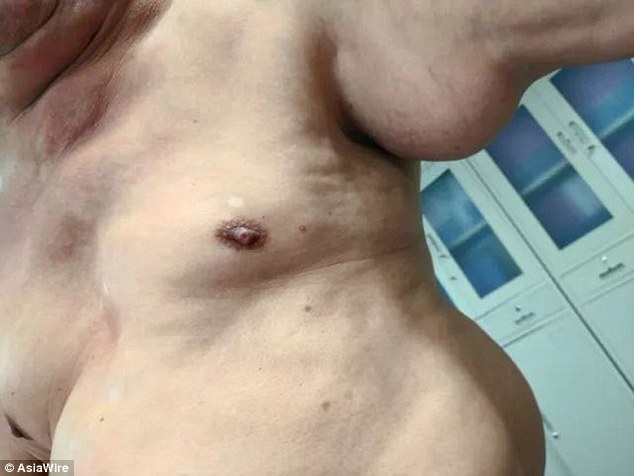 According to the National Organisation for Rare Disorders, Madelung’s Disease mostly affects middle-aged men, in particular, those who drink a large volume of alcohol.

Mr Tan has been given a ventilator to increase the blood oxygen concentration as pre-surgery treatment.