The Chinese model involved in Dolce & Gabbana’s controversial advertising campaign has claimed that the Italian brand had ruined her career.

The luxury fashion house was forced to cancel a high-profile runway show in Shanghai and apologise to Chinese people after a trio of promotional videos called ‘Eating with Chopsticks’ and derogatory remarks allegedly made by designer Stefano Gabbana were widely condemned as ‘racist’ in November.

Zuo Ye, the model who was filmed struggling to eat a pizza, pasta and a cannoli with a pair of chopsticks in the videos, said she had questioned the director at the shoot during ‘the silly and embarrassing act’.

In Dolce & Gabbana’s latest ad campaign video, the Chinese model was seen trying to eat pizza with a pair of chopsticks, which net users deemed racist and disrespectful 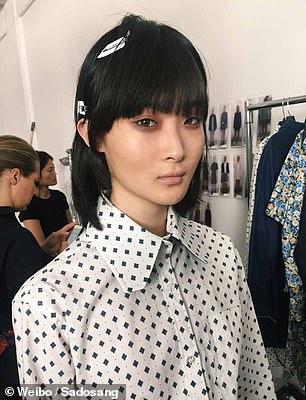 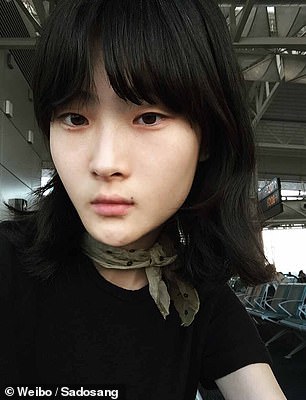 Zuo Ye, the Chinese model who was featured in the controversial videos, said she had questioned the Italian director during ‘the silly and embarrassing act’ at the shoot

In a lengthy statement released on her Weibo account on Monday, Zuo apologised for her appearance in the campaign. She added that she was not given any details prior to the shoot and had no say in the editing process.

‘I was only told that they were going to be social videos and that it would involve Italian food,’ the full-time model wrote. D&G had previously said the videos were meant to promote its new campaign ‘DG Loves China’ and the November runway show in Shanghai.

‘Everyone at the shoot spoke Italian. Only the director spoke to me in English when he was giving me instructions. I didn’t talk to anyone else,’ she said, adding that the project took place at a Chinese restaurant in Milan.

Zuo said she was shocked when the director asked her to pick up the large cannoli – the first ‘dish’ – with a pair of chopsticks. 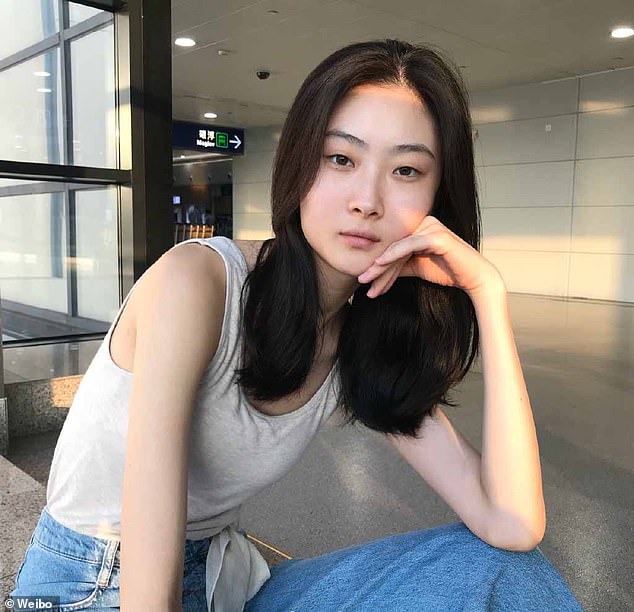 In a lengthy statement released on Monday on her Weibo account, Zuo said she was not given any details prior to the shoot and had no say in the editing process 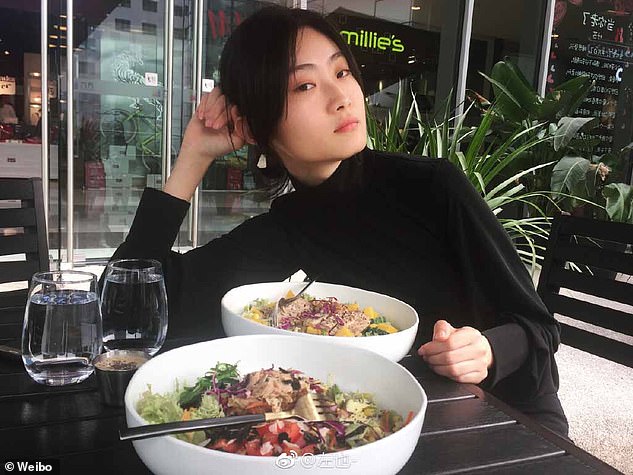 ‘Everyone at the shoot spoke Italian. Only the director spoke to me in English when he was giving me instructions. I didn’t talk to anyone else,’ Zuo said

‘Obviously I failed the first try, since the cannoli was so large,’ she wrote. ‘I asked if he was “kidding me”.’

‘The director said: “Yes! I know it’s hard, just try to do that,”‘ Zuo said. ‘I thought it was very embarrassing and silly as the pieces of food were so large.’

The team then repeated the same steps for the pizza and pasta.

‘Out of respect and trust for the brand, I failed to consider the consequences after the videos were published. I apologise for being inconsiderate and I will take this incident as a lesson,’ she wrote.

‘I never thought being a model for the brand would have almost ruined my modelling career,’ she said.

Zuo also revealed that she, her agent and even her family members have received death threats over the phone, emails and on the Internet during the row.

‘I deeply respect and love my country and would never do anything to harm China’s reputation. I am proud to be representing China on the runway,’ she added. 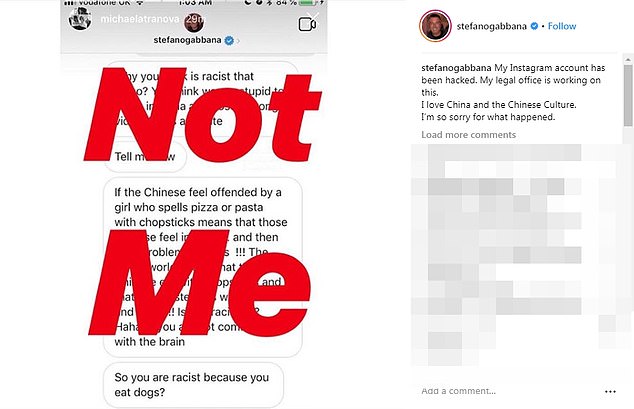 The 57-year-old designer said his Instagram account was hacked and his legal office is investigating. Chinese celebrities had cancelled their appearances at the runway show 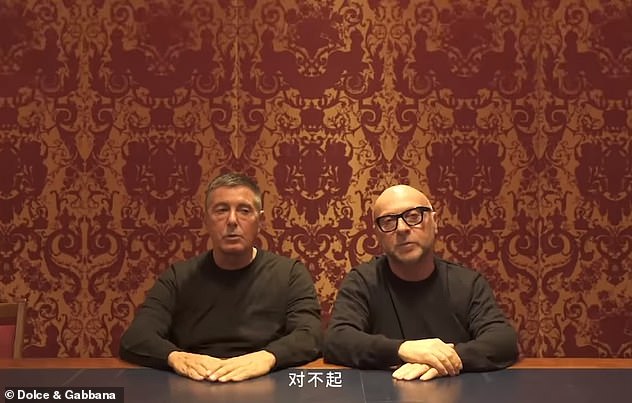 In an attempt to salvage their reputation in the world’s most important luxury market, Domenico Dolce and Stefano Gabbana capped a 1 minute 30-second mea culpa by saying ‘sorry’ in Mandarin in a video in November

‘I will draw a lesson from this and show the Chinese in a better light. I apologise for everything once again.’

Her agent, Yico Kwo, told MailOnline that the company fully supports Zuo and her statement, and has been keeping close contact with her.

The videos were condemned as ‘racist’ and culturally insensitive by celebrities and on social media after they went viral, sparking a massive backlash which prompted celebrities to cancel their appearances at the fashion show and e-commerce platforms to remove all D&G products.

The blunder was compounded when screenshots were circulated online that appeared to show co-founder Stefano Gabbana making derogatory remarks about China.

The company later apologised in a statement on Weibo, saying both Gabbana’s and the brand’s accounts had been hacked. 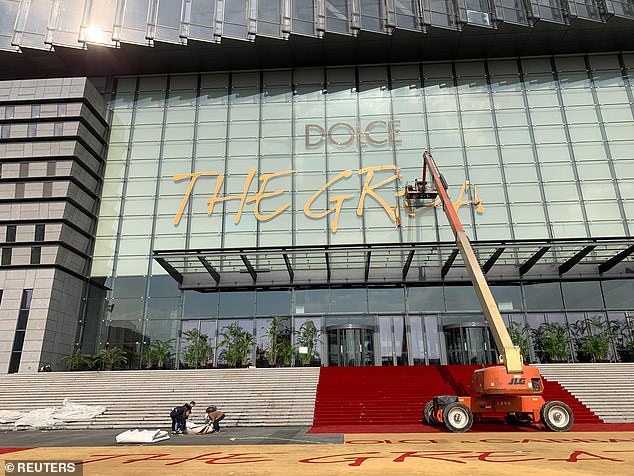 Workers remove signs that read ‘Dolce & Gabbana The Great Show’, at the Shanghai Expo Center after the fashion show by the luxury fashion brand was cancelled in Shanghai 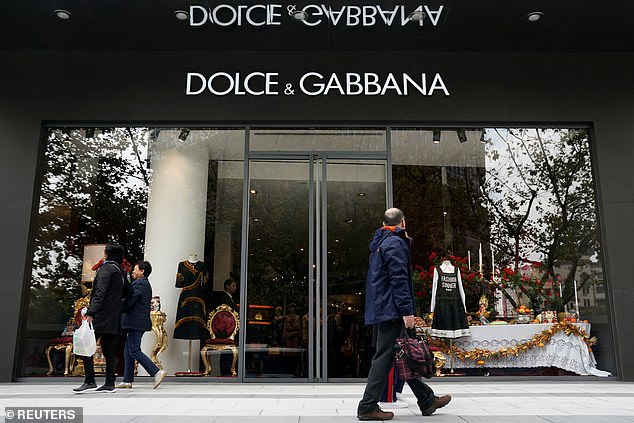 A Dolce & Gabbana store in Shanghai. The brand has cancelled a high-profile runway show in Novemeber amid a racism row over its new ad campaign and designer Stefano Gabbana

‘Our dream was to bring to Shanghai a tribute event dedicated to China which tells our history and vision,’ Gabbana and co-founder Domenico Dolce said in a statement on Instagram. ‘What happened today was very unfortunate not only for us, but also for all the people who worked day and night to bring this event to life.’

In a follow-up YouTube video, the pair also asked for China’s ‘forgiveness’ in an attempt to salvage their reputation in the world’s most important luxury market.

‘We want to say sorry to all Chinese across the world, of which there are many, and we are taking this apology and message very seriously,’ Gabbana added. ‘We will never forget this experience and lesson, and this sort of thing will never happen again.’

The designers ended the clip by saying ‘dui bu qi’ – ‘sorry’ in Mandarin.

The label held its autumn 2019/winter collection in Milan on January 12, the first presentation for the brand since the apology to China.