The Chinese Navy and Australian warships were engaged in a stand-off last week after a confrontation in the South China Sea.

The Australian vessels were sailing close to the Spratly Islands – which are claimed by Beijing as well as the Philippines, Taiwan and Vietnam – when the incident happened, the ABC reported.

Australian warships – including HMAS Canberra, HMAS Hobart, HMAS Stuart, HMAS Arunta and HMAS Sirius – are on exercise in the region ahead of military war games off Hawaii with the US and Japan.

‘Unplanned interactions with foreign warships throughout the deployment were conducted in a safe and professional manner,’ Defence said in a statement.

‘Activities conducted during this routine deployment are part of the Australian Defence Force’s regular military-to-military engagements throughout the Indo-Pacific, which are conducted each year.’

Beijing claims most of the South China Sea based on the ‘nine-dash line’, a vague delineation which dates back to the 1940s. 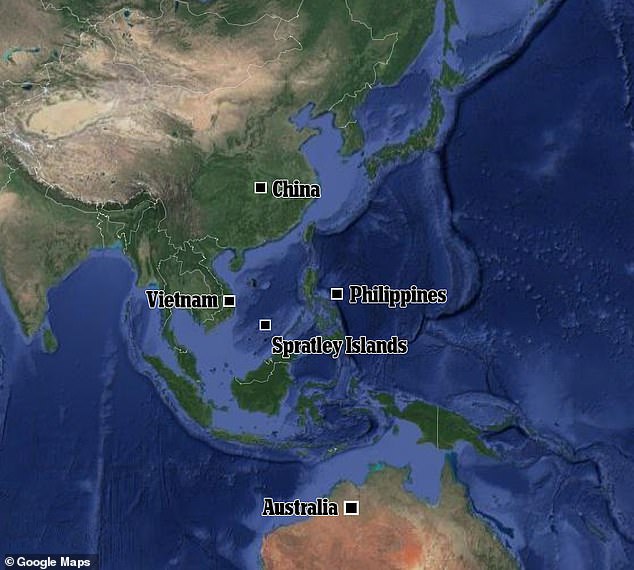 The Australian vessels were sailing close to the Spratly Islands – which are claimed by Beijing as well as the Philippines, Taiwan and Vietnam – when the incident happened

Beijing has spent years building military bases on artificial islands in the area, which is home to valuable oil and gas deposits and is a vital commercial waterway.

Earlier this month China accused the US of ‘sailing through the world like a bully’ after two aircraft carriers, the USS Nimitz and USS Ronald Reagan, were dispatched to the region in a show of force.

Hours after US Secretary of State Mike Pompeo branded Beijing’s claim over the waters as ‘completely unlawful’, China’s embassy in Washington hit back by accusing Donald Trump’s administration of ‘flexing muscles, stirring up tension and inciting confrontation’ with a ‘completely unjustified’ attack.