A Chinese passenger plane with 166 people on board made an emergency landing with two wheels missing at Shenzhen airport on Tuesday, after the pilots aborted landing at nearby Macau and declared ‘Mayday’, aviation authorities said.

Flight JD5759, which had taken off from Beijing, was operated by Capital Airlines, the Civil Aviation Administration of China (CAAC) said in a statement on its website. Capital Airlines is a unit of Hainan Airlines.

The crew also reported a fault in one of the Airbus A320’s engines at about 11:40am local time, about three hours and 20 minutes into the journey, according to CAAC. 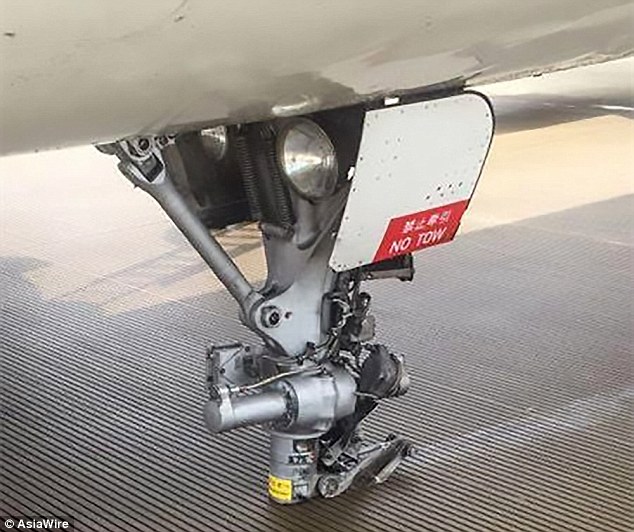 The authority added that there were 157 passengers and nine crew on board.

Capital Airlines said in a post on Weibo, China’s equivalent of Twitter, that it suspected the flight encountered wind shear whilst attempting to land in Macau and the crew ‘concluded that landing gear may have been damaged.’

Despite having two wheels missing, the plane landed safety at Shenzhen at about 11:58am and all passengers and crew members were evacuated at 12:13pm.

Footage posted online shows passengers evacuating the plane via emergency slides at the Shenzhen airport while pictures circulating online shows two of the landing gear wheels missing from the aircraft.

The plane’s impaired left engine was also pictured, reportedly damaged by the flying debris of its wheels. 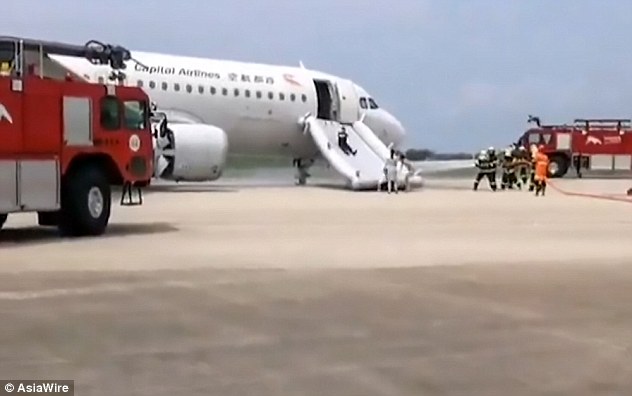 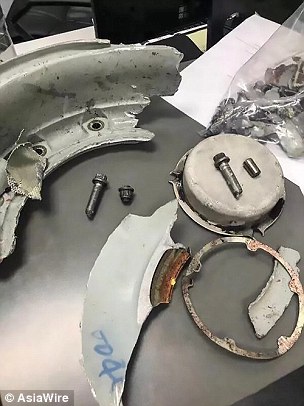 One of the plane’s broken front landing gear tyres (left) and debris (right) from the wheels were collected after the incident. All 166 people on board were evacuated safely after the landing

The airport at Shenzhen, about 40 kilometres (25 miles) north-east of the gambling hub of Macau, shut one of its runways for three hours to accommodate the emergency landing, the airport said on its official Weibo account.

It also added that the incident caused delays to a total of 161 other flights at the airport. The airport has arranged for the affected passengers to reach Macau by ferry.

The aircraft’s 146 passengers and nine crew travelling from Kunming, Yunnan province, to Hangzhou, Zhejiang province had spent only 20 minutes in the air when oxygen masks were dropped and they were diverted back to Kunming.