A Chinese construction company is building a 106-storey skyscraper in Malaysia at an eye-opening speed.

Workers have managed to complete one story every three days using ‘the world’s most advanced techniques’, according to state media in China.

The 492-metre (1,614ft) tower in the financial district of Kuala Lumpur is set to be the tallest building in Malaysia – overtaking the famous Petronas Twin Towers by some 40 metres (131ft). 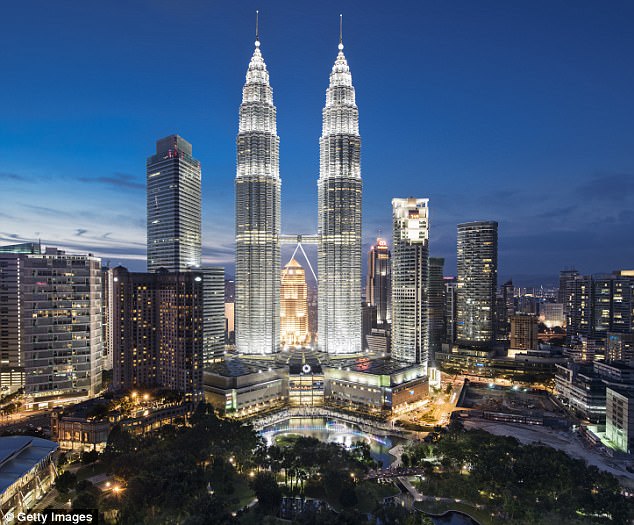 The skyscraper will overtake the Petronas Twin Towers (pictured), also in Kuala Lumpur

The supertall building is called The Exchange 106 and is set to complete by the end of this year. The skyscraper is previously known as The Signature Tower.

It is developed by commercial property developer Mulia Group, which hired China Construction Eighth Engineering Division to carry out the construction.

It only took the Chinese state-run company three days on average to complete one floor, according to People’s Daily, citing China Central Television Station.

The report also said the workers are using the world’s most advanced construction techniques. 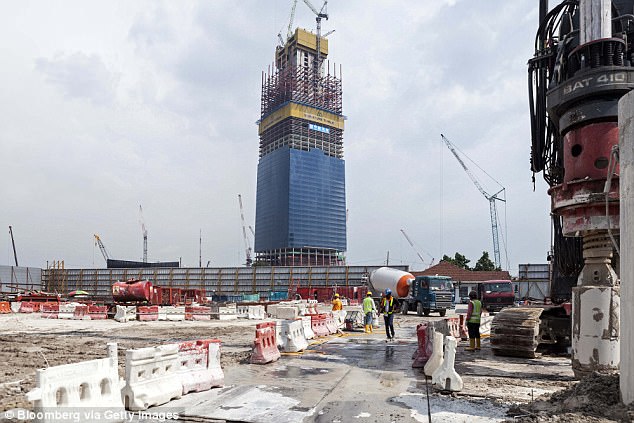 Workers have managed to complete one story every three days, according to Chinese media

Apparently, the construction company hired Chinese experts and around 2,000 international workers to build the new landmark with Chinese know-how.

The Exchange 106 is the tallest building a Chinese company has been contracted to build overseas.

‘Even in China, the speed is remarkable,’ said the director.

To ensure the safety of the workers, the company decided to build construction lifts within the core structure – instead of around the building.

A deputy engineer of the project said: ‘This is the first time such technique has been used in the world.’

The main structure of the building was complete in December last year, reported Huanqiu.com. 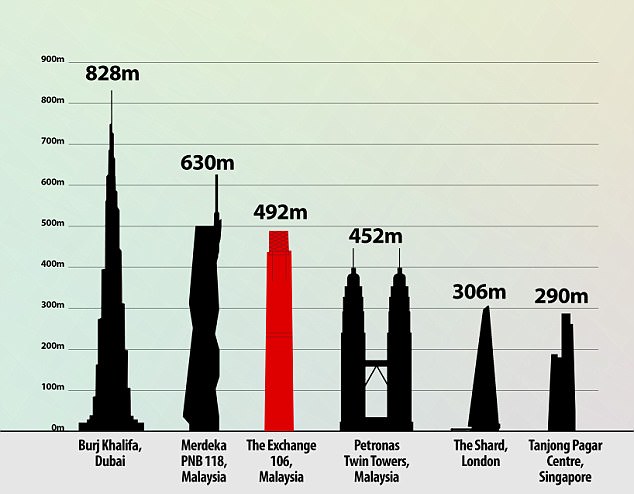 The above chart compares the skycrapers in Malaysia and Singapore with the Burj Khalifa in Dubai, the tallest building in the world, as well as The Shard in the British capital of London 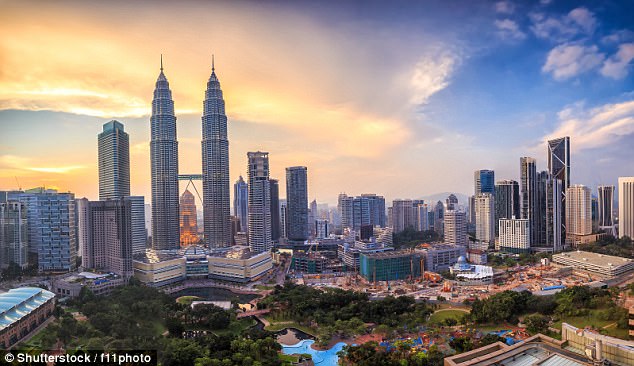 Another even taller building is being planned in Kuala Lumpur (pictured) which is set to have 118 storeys and stand more than 500 metres. The building is expected to finish by 2020

Petronas Twin Towers, opened in 1998, was the world’s tallest buildings until the completion of Taipei 101 in 2004.

According to Strait Times, The Exchange 106 would be taken over by another supertall building in Kuala Lumpur, the Merdeka PNB 118, which would have 118 storeys.

At the moment, the tallest building in the world is the Burj Khalifa in Dubai, which stands 828 metres.

The Exchange 106 would share the 12th position on the world’s tallest building list with the Shanghai World Financial Center, which took 11 years to build, according to skyscraper expert Emporis.

This is not the first time Chinese workers have impressed the world with their eye-opening efficiency.

Seven trains and 23 diggers were used to assist the massive project in Fujian Province, according to a supervisor.

Workers also installed the traffic signals and a series of traffic monitoring equipment at the Nanlong Train Station on January 19.