Drinking a cup of tea or coffee in the morning could dramatically reduce your risk of stroke and dementia, new research has revealed.

A study of more than 360,000 participants over a period of 10 to 14 years found those who drank two to three cups of coffee, three to five cups of tea, or a combination of four to six cups of either a day had the lowest risk of both conditions.

Researchers from Tianjin Medical University in Tianjin, China, said the findings suggest moderate consumption of the drinks together or separately could be the key to maintaining a health brain as you grow older.

Roughly 5.3 per cent of deaths in Australia are caused by stroke, according to the Department of Health, while an estimated 400,000 to 459,000 Australians are currently suffering from dementia.

Drinking a cup of tea or coffee in the morning could reduce your risk of stroke and dementia, new research has revealed (stock image)

Dementia refers to a general decline in brain function, but it can be triggered by a stroke.

Participants’ information came from UK Biobank, an anonymous database of health data from half a million volunteers across the UK gathered between 2006 and 2020.

The Tianjin study analysed men and women aged 50 to 74 who self-reported their consumption of coffee and tea.

Over the course of the study period, 5,079 participants developed dementia and 10,053 experienced at least one stroke, according to the study, which was published in the PLOS Medicine journal.

But studies from doctors, dentists and nutritionists reveal quitting caffeine will leave teeth your whiter and reduce blood pressure, a positive effect for your overall health.

Studies published in the Journal of Clinical Sleep Medicine found drinking coffee even six hours before bed can significantly disrupt the sleep cycle that night.

* Start your day with warm lemon water before you have any coffee.

* Drink your coffee before noon on a full stomach. She tries to drink hers around 9am. 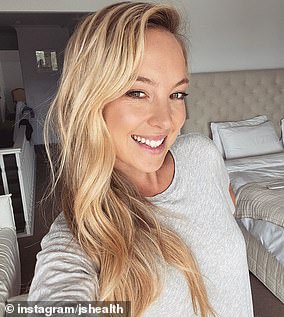 Nutritionist Jessica Sepel (pictured) shared her tips on drinking coffee healthily, including having just one per day

* Skip the afternoon coffee because caffeine can stay in your system for hours and make it difficult to fall asleep.

* When the craving for your second or third cup comes, opt for a chai tea with almond milk and ground cinnamon, a dandy coffee, green juice or homemade healthy chai latte.

* If you’re craving the pick-me-up you get from coffee, try to eat something nutritious instead.

* Ensure you’re eating enough protein and good fats at each meal to keep your blood sugar balanced. When you don’t eat these macronutrients, you’ll crave pick-me-ups, like caffeine.

* Make sleep a priority. For most people, that means a solid eight hours each night. When you’re well rested, Jessica said you won’t even miss those extra afternoon coffees.

Experts say quitting coffee or limiting your intake past 10am or 11am can improve sleep quality because it gives the body time to return to its natural resting state, allowing sleep hormones such as melatonin to work as they should.

Coffee is highly acidic, which means it erodes tooth enamel and stains teeth with every sip.

By cutting it out, dentists say you can protect your teeth from further erosion leading to a brighter, whiter smile.

Caffeine also dries out your mouth which reduces the presence of saliva, a key defence against the growth of bacteria that causes tooth decay.

Reducing your intake will therefore make your mouth a healthier place.