You’re so cute I could EAT you… if it wasn’t for this glass! Chinese toddler is unfazed as lioness tries to sink her fangs into him

A ferocious lioness tried to sink her razor sharp fangs into an unfazed toddler standing on the other side of a glass enclosure at a zoo in China, amazing footage shows.

The video, taken in Shenyang zoo in Liaoning Province, China, shows the youngster posing with his back to a pair of adult lions.

In the background, the lioness starts to size up the child, staring intently at him.

Suddenly, the predator raises her paws, which are the same size as the toddler’s head, in an attempt to snatch him, but is left bemused when she makes contact with the dividing glass.

The fearsome cat then bares her teeth and opens her jaw as wide as possible, hoping to chomp down on the unassuming boy.

All the while, the youngster stands facing forward unaware of the lioness’s attempt to eat him.

His mother – not named in local media – sits behind the camera and watches on as her boy then fearlessly approaches the glass cage and puts his hand right in front of the lioness.

Adorably, the large cat then seems to view the boy as friend rather than prey and starts attempting to lick his hand as if she were grooming him.

She even tries to sniff the boy through the cage, seemingly trying to work out whether the child is food or play. 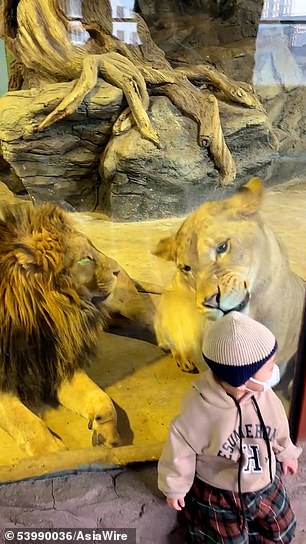 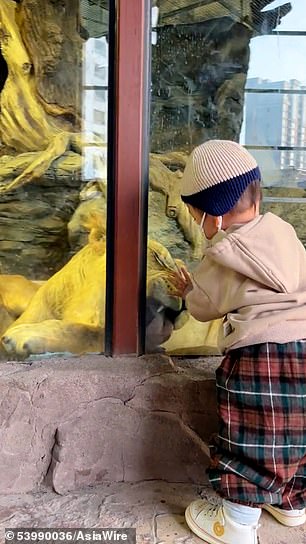 Adorably, the large cat then seems to view the boy as friend rather than prey and starts attempting to lick his hand as if she were grooming him