Chloe Ferry has shared an eye-popping before and after photo, displaying the impressive results of her two stone weight loss.

The Geordie Shore star, 24, wrote an impassioned post detailing how she was spurred on to become fit after being inundated with cruel messages online.

Chloe said from the moment she found herself in the public eye, she was hit with a barrage of body-shaming comments that led her to go under the knife many times.

Wow: Chloe Ferry, 24, has shared an eye-popping before and after photo, displaying the impressive results of her two stone weight loss

In the snap, the reality star posed in the same black bikini from the back as she showed off the results of her fitness regime.

She wrote: ‘It has taken a lot for me to upload these photos, as you know I’m judged on anything I do.

‘A few years ago if anyone had told me where I’d be today I’d have laughed at them. It all started a good few years ago, being put into the spotlight and in the public eye at a very young age.

‘Every aspect of my life was commented on – more so than anything else was my appearance. I’m a tough person, but waking up every day to comments like “you look fat” or “get a boob job” really starts to stick in your head, and it makes you start to think these people are right – I do need a boob job, or I do need to lose weight. 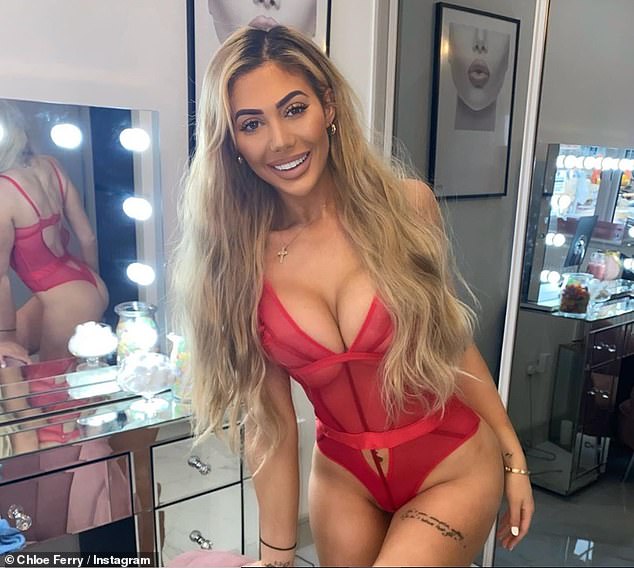 Honest: The Geordie Shore star wrote an impassioned post detailing how she was spurred on to become fit after being inundated with cruel messages online

‘I wanted a quick fix and turned to surgery thinking all these comments would go over night. This couldn’t have been further from the truth! In fact they increased!

‘More fat comments, more about the way I looked. It eventually made me dread posting a photo because of all the trolls out there.’

It was at this point Chloe decided to start going to the gym which she found helped her mentally as well as physically.

‘This is where I made a lifestyle choice, I started to go to the gym and looking after my body. For me, it was my own little escape time, a break from the negativity that social media was bringing to my life.

‘It wasn’t just good for my body, but good for my mind. At this point the negative comments became the driving factor to push me harder. 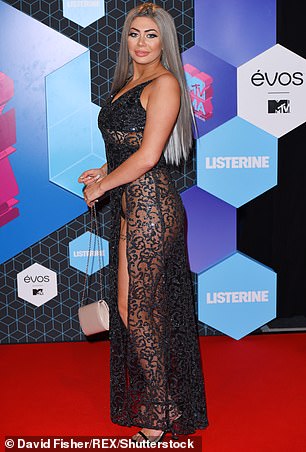 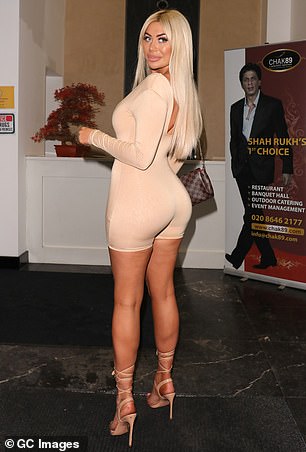 Change: Chloe said when she found fame, she was hit with body-shaming comments that led her to go under the knife many times (pictured left, in 2016 and right, in 2019)

‘Put yourself in my shoes, and imagine opening your Instagram to thousands of comments about being fat. I would not wish this on anyone.’

Chloe said she is now happy in her own skin and encouraged others to not give up on their fitness goals.

She wrote: ‘Now, I’m body confident in my own skin and happy with the way I look, physically and mentally. I’m finally feeling great! If I can do it so can you, and I want to be there to help anyone feeling that they can’t.

‘Head over to my new lifestyle account @ferrylifestyle where I’m going to be showing you guys my routines.’ 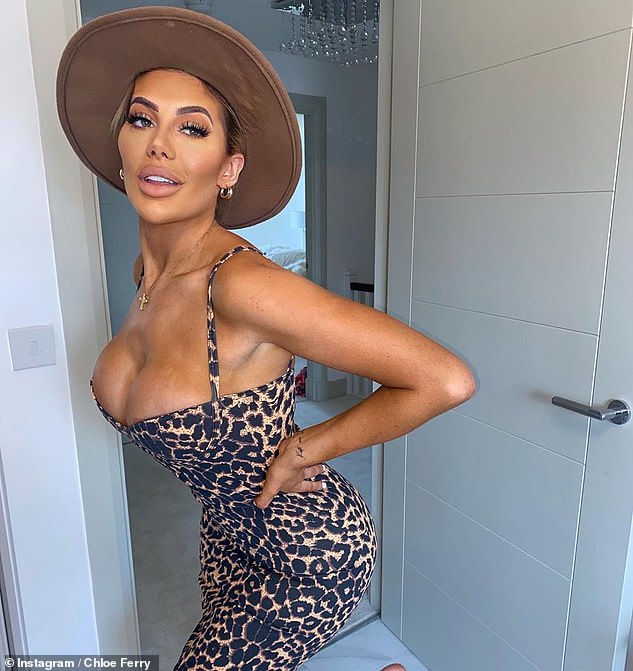 Sizzling: Chloe put on yet another eye-popping display in tight leopard print dress on Friday as she took to Instagram to share another sexy snap

It comes after Chloe admitted she was ‘overwhelmed’ after discovering she had dropped to a size eight dress size.

The reality star has dropped more than two stone in weight after submitting herself to a drastic health and lifestyle overhaul in a bid to shape up.

And her hard work payed off as she prepared for the weekend by trying on a dress that she previously couldn’t get into, and discovering it fits perfectly. 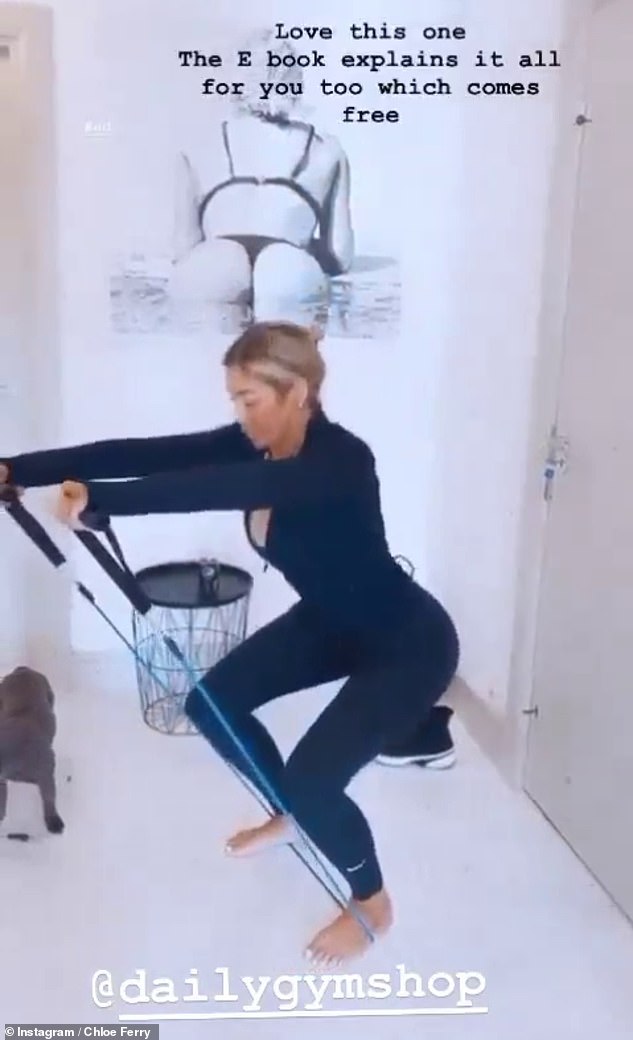 In shape: Chloe also shared a glimpse of her gruelling fitness regime in videos posted to her Stories

Addressing Instagram followers she said: ‘I don’t know if you guys remember, I think about four or five weeks ago I showed you that dress I ordered but I couldn’t fit into it, so I think today is the day that I’m going to try it on – I hope it fits.’

The beauty also revealed her weight was down to 9st 12lbs after showcasing the outline of her abs amid her workout regime. 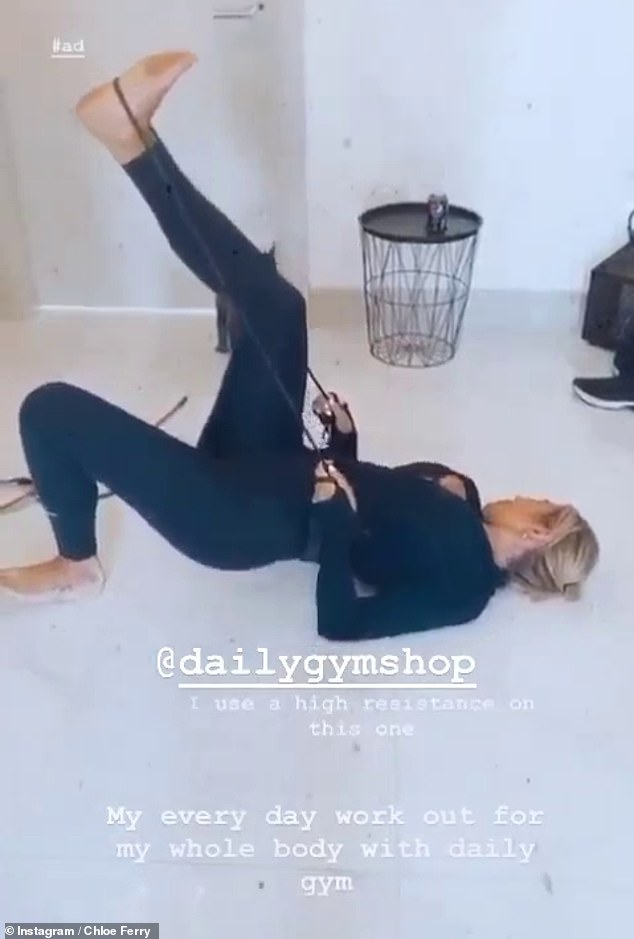 Keep moving: Chloe shared another video of her gruelling fitness regime as she embarked on her daily workout