They first were romantically linked four years ago.

And Chloe Grace Moretz enjoyed a night out with Kate Harrison at Giorgio Baldi in Santa Monica on Sunday.

Chloe, 25, was reportedly single in 2021, and her latest sighting suggests she may have reconciled with Kate.

Hanging out! Chloe Grace Moretz enjoyed a night out with Kate Harrison at Giorgio Baldi in Santa Monica on Sunday

Chloe and Kate appeared fully engrossed in the conversation.

The Kick-Ass actress wore a sheer black top and her hair down in waves while Kate opted for a white tank top and ponytail.

At one point, Chloe took a sip from her water as her pals chatted away.

Chloe and Kate were first linked in 2018 after they were spotted kissing at Malibu. 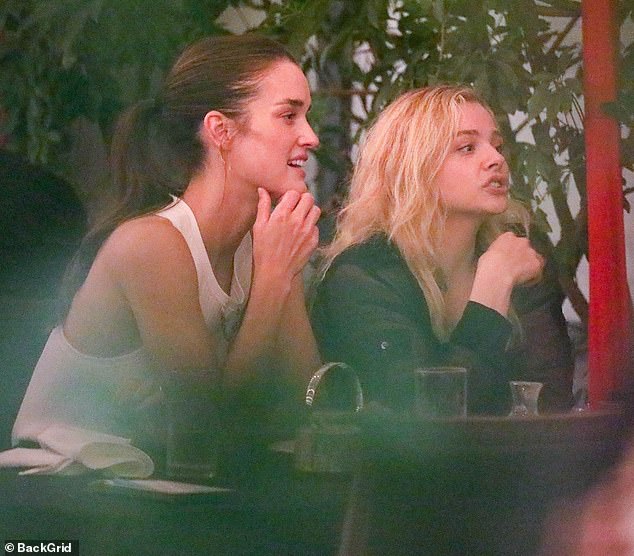 All ears! Chloe and Kate appeared fully engrossed in the conversation

The two were photographed at the time leaving the trendy Malibu branch of Soho House following a dinner date at the nearby celebrity hotspot Nobu, having apparently rented a home nearby.

The smiling pair were spotted emerging from the club together, and walked arm-in-arm down the side of the busy Pacific Coast Highway, strolling the short distance to their rental pad.

‘Once tucked away behind a picket fence, the pair engaged in a makeout session that lasted for thirty minutes,’ a source told DailyMail.com at the time. 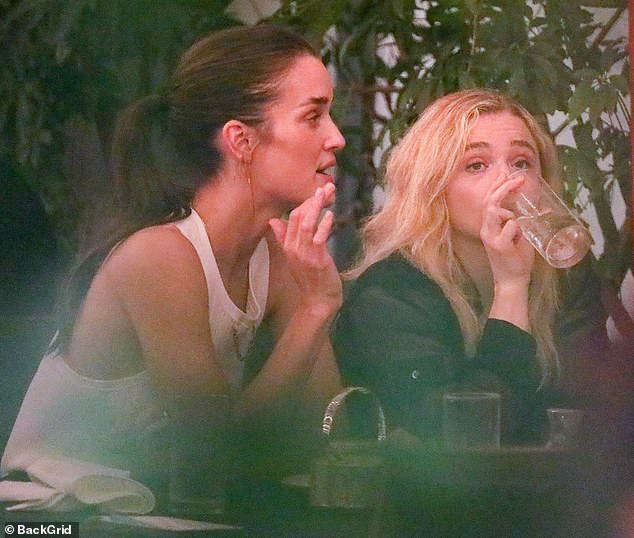 Hydrate: At one point, Chloe took a sip from her water as her pals chatted away

Kate, is the daughter of actor Gregory Harrison and Randi Oaks, and is a model signed to multiple agencies around the world. The 5ft10 star has 60.9K on Instagram.

In 2017 she featured in a girl on girl photoshoot with fellow model Emily LaBowe for Playboy, which billed them as ‘newcomers’. The pictures, shot at a Hollywood home, showed the naked pair writhing in bed.

Chloe was reportedly single in 2021, according to The Advocate.

In an interview given after her split from Brooklyn, she admitted she’d often questioned why she felt like she ‘couldn’t do all the things that my friends are doing’ with their relationships – including ‘kissing in the street’.

Talking to NET-A-PORTER’s digital magazine, PorterEdit, she divulged: ‘The problem with me is that I’m fairly rebellious, in the sense that if people tell me not to do [something], I’ll be like, I’m going to do it…’

The screen star continued: ‘I was like, “Why can’t I kiss on the street and do all of the things that my friends are doing?” And you can – you can do whatever you want – but then I’d come home and be mad that there’s a photo of me kissing on the street.’

In the same interview Chloe talked about discussing sexuality with her older brothers, Trevor and Colin, who are both gay. ‘I was like, “I never actually asked you what it was like to come out. And you came out under a very religious upbringing, because our family was very Christian Baptist. What did that mean? Were you afraid? What was your process?”‘