Chloe Madeley, with boyfriend James Haskell, who suggested she tried a probiotic

She has always been candid about her body battles.

The gym bunny Chloe Madeley was praised by fans when she revealed a less than flattering shot of her bloated stomach on social media.

Taken in 2016, the personal trainer, 30, told her 100,000 Instagram followers she had days when she would look several months ‘pregnant’ – but today it can be disclosed she has finally found a solution to beat the problem that has plagued her for 15 years.

Posting an image of her ripped abs taken in recent weeks, the journalist and model said a new probiotic supplement has helped her combat the severe and painful problem she’s battled since she was a teenager.

She takes Alflorex – known in the US as Align – which was recently launched in the UK and contains a specific strain of bacteria shown in clinical trials as effective against the symptoms of irritable bowel syndrome (IBS) which can also cause bloating.

Chloe – who is not thought to have IBS – is the daughter of former morning TV hosts Richard Madeley and Judy Finnigan – and said stomach bloating had impacted on her confidence growing up.

Chloe revealed she kept her problem hidden from her fans confessing: ‘I always had a flat tummy in the morning so that’s when I would take my selfies, but by the end of the day, I often looked pregnant,’ she told website Healthista today.

She credits her boyfriend, rugby star James Haskell with helping her find a solution. 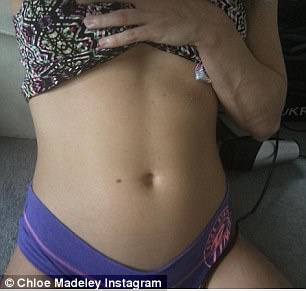 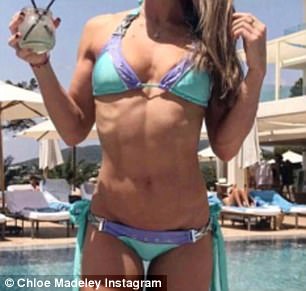 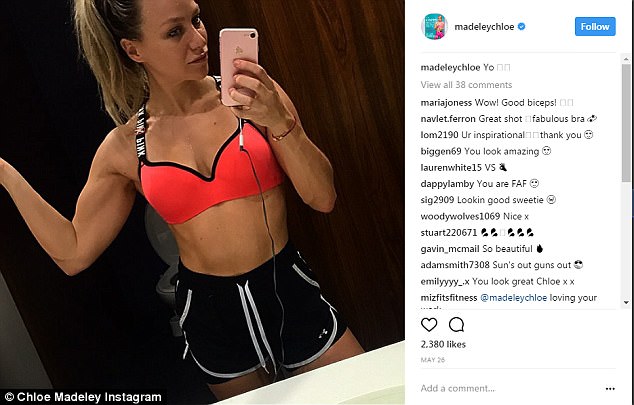 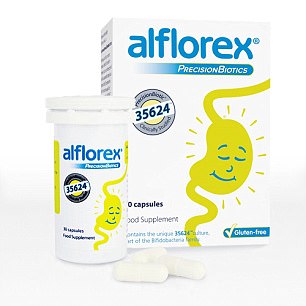 Chloe has credited Alforex with helping ease her bloating

‘I remember being a prepubescent teenager and wanting to be like all my friends and wear belly tops,’ she said.

‘The Spice Girls and Christina Aguilera were our icons. But I would really struggle with bloating every day, even though I was really skinny growing up’.

I went overboard on the protein

Chloe, who completed Channel 4’s The Jump in 2015, said that as she got older and embraced health and fitness, the bloating actually intensified.

‘Ironically, as I got into health and fitness in my 20s it got worse,’ she explained.

‘I started to get this terrible pain and was always bloated by the end of every day; kind of like a feeling of having really bad trapped gas, every day; a sharp, stabbing pain below my ribs. It was awful.’ 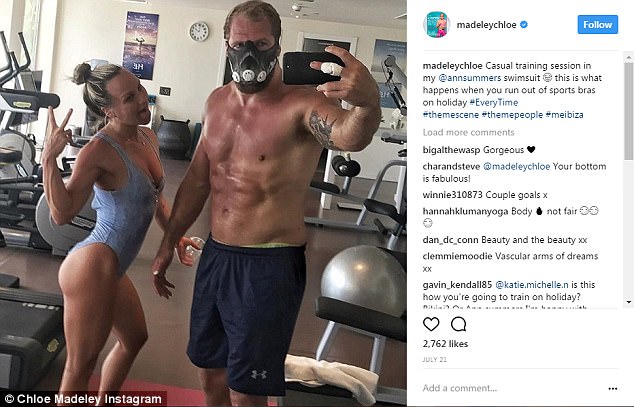 She blames eating too much protein – especially synthetic powder – on aggravating it.

‘When I first got into fitness, I started playing around with my food intake with new fibre and water goals to hit. 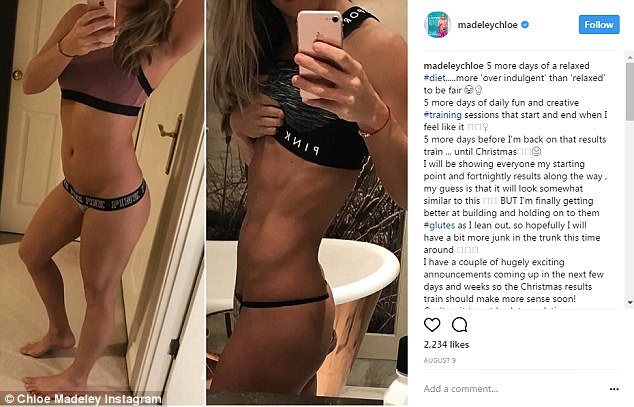 ‘Plus, I was training twice a day in the gym and that meant my protein requirements were quite high, with my whole diet centred around eating protein with vegetables up to five times a day.

‘But the body finds it hard to metabolise protein, especially when it is synthetic. I was consuming a lot of protein powders at the time and really seeing the side effects -more bloating, more gas, and more pain.’

‘I always had a flat tummy in the morning so that’s when I would take my selfies, but by the end of the day, I often looked pregnant.’

Using probiotics — ‘friendly’ bacteria — to treat IBS is another area of great interest, but do they really work?

A study last year by the University of Copenhagen into genome medicine concluded probiotics made no difference to the gut flora of healthy patients, prompting headlines saying probiotics didn’t work after all. But does that mean they won’t help IBS?

Professor Kevin Whelan says: ‘Probiotics and their role in IBS is an incredibly complex area. It’s true that stomach acid does kill off some of the probiotics — that’s its job, to stop bacteria passing through — but even if only 1 to 10 per cent of several hundred billion survive, that is still a significant number.’

Professor Whelan says the following products may be effective for IBS:

A 2014 UK review of the evidence concluded that gut-directed hypnotherapy had short-term benefits for patients with IBS that had not responded to other treatments.

Chloe says it was her boyfriend of three years, Wasps and England rugby player James Haskell, who suggested she tried a probiotic.

The supplements promise to help replenish healthy bacteria in the gut which can be diminished by a stressful lifestyle, high sugar diet or taking antibiotics.

A dearth of good bacteria in the digestive system have been shown to lead to problems as wide-ranging as eczema, depression and obesity as well as IBS type symptoms including bloating, gas and abdominal pain.

The freelance journalist came across Alflorex, which was developed in collaboration with the APC Microbiome Institute at University College Cork.

One study was carried out on 362 female patients with IBS. Half of the women were given a placebo and half were given the supplement to take and their IBS symptoms were monitored daily.

The research, published in the American Journal of Gastroenterology, found that at the end of the four weeks the women taking the Alflorex saw their symptoms significantly improve, especially abdominal pain, constipation, bloating and wind.

Taking one tablet a day, Chloe says by the end of her third week her symptoms had changed dramatically.

‘I noticed that when I went to bed at night, my tummy was just as flat as it was in the morning – which was a first for me. I have a flat tummy throughout the day now.’

Eight months she says her bloating issues have all but disappeared.

‘I still eat a lot of fibre and protein, I still chug water but I never have any reactions or flare-ups,’ she says.

‘It’s made me much more confident about what I wear now – finally after all the training and dieting and 15 years of suffering bloating, I can wear what I want without worrying about whether my stomach looks bloated or not.’

WHAT I EAT IN A DAY: CHLOE MADELEY

Breakfast: Whole oats and protein powder mixed together with billing water from the kettle. ‘It tastes like dessert, it’s the best thing ever.’

Lunch: typically lean protein such as chicken or fish with vegetables and a carb source such as rice or sweet potato if it’s around a workout for energy. If it’s not around a workout I won’t have the carbs but have something with fat instead such as some avocado or nuts or a big fritatta with smoked salmon and whatever vegetables I can find.

Mid-afternoon snack (post-training): some vegetables with nuts or avocado.

Dinner: Lean protein such as chicken, fish or a lean cut of steak with brown rice or sweet potato and whatever vegetables I feel like, perhaps some of my speciality, broccoli mash (see below). I also make a great courgetti bolognaise made with lean mince, garlic, chopped tomatoes and chilli, it’s gorgeous.

Chloe’s favourite quick recipe – Broccoli mash: Steam broccoli, drain it and add salt and pepper. Add in some jalapenos and hot sauce (I am obsessed with hot food,’ she said.

Then just mash it all together and put a grilled chicken breast on top or a grilled fillet of fish.

‘I grill all my food because I like the taste and this meal is honestly the best meal in the world,’ she added.