Chloe Madeley has unveiled the first image from her magical winter wedding to James Haskell.

The fitness guru, 31, and the rugby player, 33, tied the knot at All Saints’ Church in Berkshire on December 15, with the bride stealing the show in a stunning white Pronovias gown with a V-shaped semi-sheer lace top and a satin floor-length skirt.

The newlyweds were joined by Chloe’s TV legend parents, Judy Finnigan, 70, and Richard Madeley, 62, as they posed in front of an ornate Christmas tree in photos released by Hello! magazine on Monday.

Chloe wore her blonde locks loosely around her shoulders for the big day and kept make-up fresh – a sweep of mascara, a dusting of pale blush and a nude gloss to her lips.

James kept things festive with a black suit, grey waistcoat and burgundy tie, finished off with a sprig of holly and berries on his lapel.

Proud mum and dad Richard and Judy posed with the newlyweds in front of the tree, beaming.

Judy, 70, kept it classic in a black velvet jacket and a cream and black scarf.

Richard, 62, looked dapper in a grey suit, finished off with a crisp white shirt and a pale blue tie. 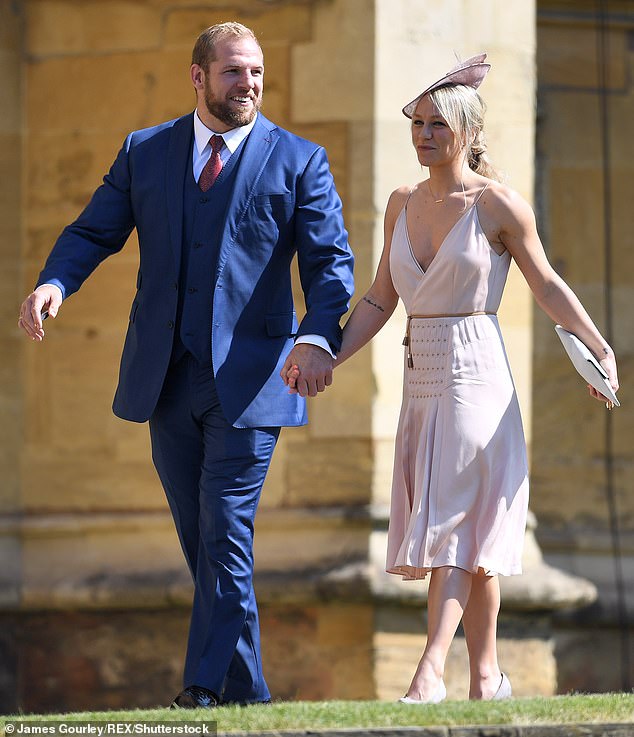 Here comes the bride: James and Chloe attended the wedding of Prince Harry and Meghan Markle in May 2018

Chloe told Hello! that her father was ‘super excited’ to be included in the wedding, driving her to the red rose-adorned church in his black Jaguar and walking her down the aisle.

She said: ‘I’m a daddy’s girl and he was so looking forward to driving me to church – a tribute to our father-and-daughter road trips.

‘He’s just like me, sentimental and nostalgic. I even caught him watching the film Father Of The Bride.’

Richard told the magazine: ‘[James will] make Chloe a great husband and us a great son-in-law – and friend. You can’t ask more than that.’ 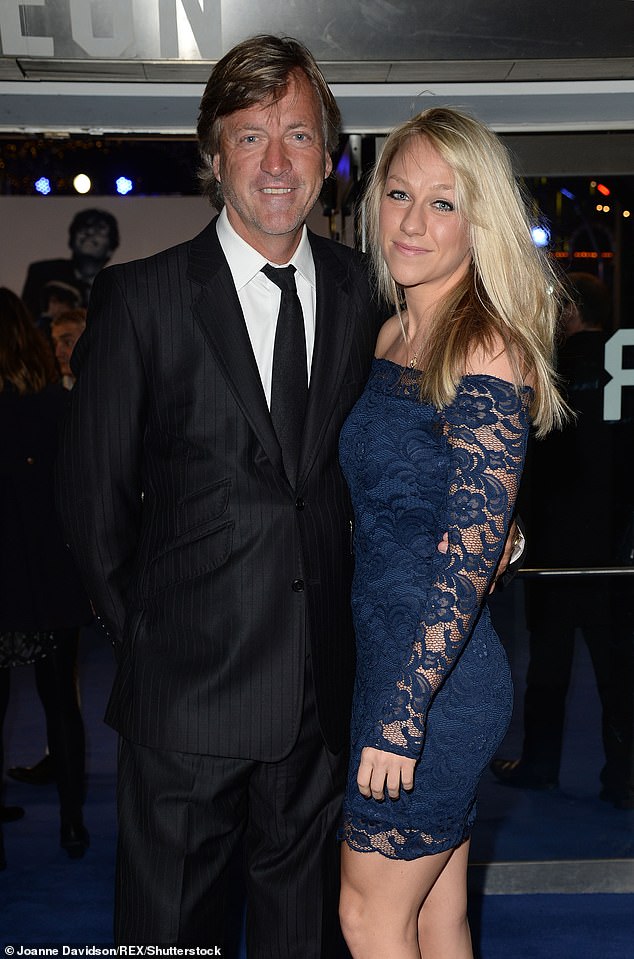 ‘Daddy’s girl!’ Chloe told Hello that her father was ‘super excited’ to be included in the wedding, driving her to the church in his black Jaguar and walking her down the aisle

Judy added: ‘James had me from “hello”.

‘He walked into our house for the first time, so toweringly tall he blocked out the light. I thought, “Hmm… he’s impressive.”

‘But far more than that, he is a sweet and lovely man. I couldn’t be happier Chloe has married him.’

Chloe said of the big day: ‘When I turned the corner inside the church and saw James standing at the end of the aisle, I immediately felt tears streaming down my face.

‘I tried so hard to keep it together but I couldn’t get a grip on it so in the end I just let myself cry.’ 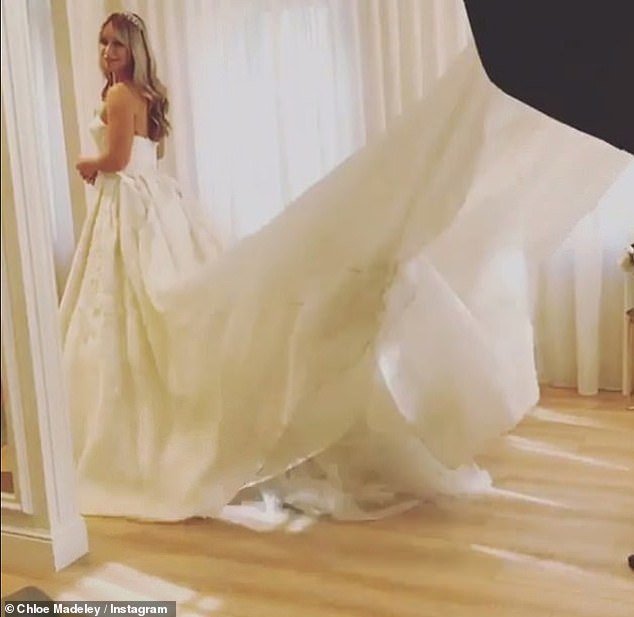 Blushing bride: The fitness guru, 31, and the rugby player, 33, tied the knot at All Saints’ Church in Berkshire on December 15 (pictured trying on dresses in October)

James admitted that he was also filled with emotion at the ceremony, adding: ‘To be honest I wasn’t sure when I saw her whether to smile or cry.

‘The moment she looked at me, I got a tingle in my stomach and couldn’t stop smiling. I have never been more happy.’

Chloe and James announced their engagement in April after three years together when the sportsman popped the question during a romantic trip to Paris. 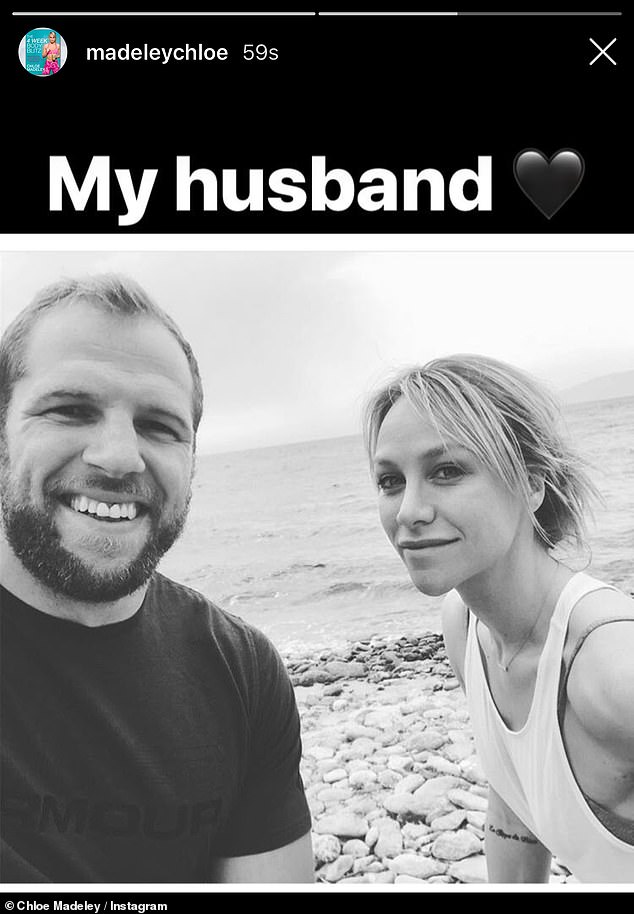 Smitten: Chloe shared a sweet snap with her new husband to confirm the marriage after trying the knot on December 15 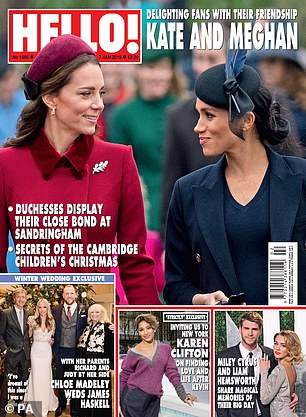 Out now: The full interview is in the new edition of Hello!

Speaking to HELLO! before the big day, James said of his wife-to-be: ‘My mum always told me that I should meet a nice girl who wanted to look after me and that’s Chloe.

‘Planning the rest of my life with her is exciting and I couldn’t be happier.’

Chloe gushed: ‘Our relationship just gets stronger and stronger. James is funny, smart, articulate and always a gentleman. I love everything about him.’

The pair will no doubt be looking at Chloe’s parents for tips on a happy and long-lasting marriage.

Richard and Judy have been happily married for 32 years, after first meeting in 1982 when they worked for Granada TV and were married to different people.

The full interview is in this week’s Hello! magazine, out now.