Chock-a-blockdown! London’s roads grind to a halt with rush hour traffic 34% higher than in 2019

Chock-a-blockdown! London’s roads grind to a halt with EIGHT-mile queues and rush hour traffic 34% higher than in 2019 as drivers try to escape the city before new rules come into force

Rush-hour traffic has skyrocketed on the night before the UK is set to be plunged into a second national lockdown.

Congestion levels this evening are at 102 per cent in London, a 34 per cent increase on average levels at this time of year.

There are currently 2624 traffic jams across the capital, spanning a total of 1939km.

It comes just hours before the country’s second national lockdown will be instated, suggesting people are desperately making attempts to get out of the city and go back home.

According to TomTom, similar levels are being seen in Birmingham, where congestion levels are at 71 per cent – four percentage points higher than is expected at this time of year.

And congestion in Liverpool is also up four per cent with congestion recordings at 59 per cent.

Around 10million people living in the North West and the Midlands are already under Tier Three, which bans socialising with other households and orders pubs to shut unless they serve substantial meals. Another 20million are under the second tightest bracket, which bans people from meeting friends and family indoors.

Congestion levels this evening are at 102 per cent in London (pictured, Regent Street), a 34 per cent increase on average levels at this time of year 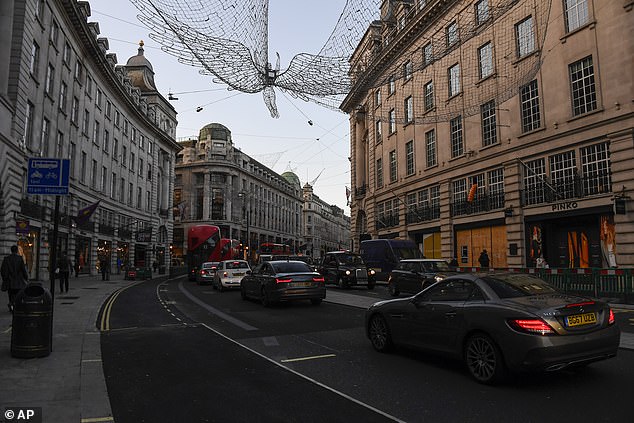 There are currently 2624 traffic jams across the capital (pictured, Regent Street), spanning a total of 1939km

Traffic in Manchester is up six percentage points to 55 per cent, while Leeds’s congestion levels are up 17 per cent to 54.

Newcastle’s congestion levels have shot up to 60 per cent – 34 per cent higher than is expected at this time of year.

And although Sheffield’s congestion levels are at 47 per cent, it is still 17 per cent higher than usual for this time of year.

Boris Johnson’s second lockdown is set to last for four weeks and finish on December 2 – a date which the Prime Minister has vowed will not change.

He has advised workers to do their jobs from home where possible, and it seems those who commute into the city are all making a final trip back home for the next month. 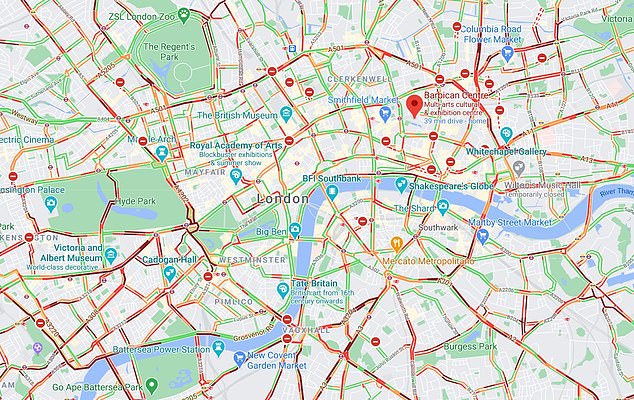 Johnson said today that the new lockdown, due to come into force just after midnight tonight and end on December 2, would not go on after that.

But his pre-recorded speech of around seven minutes made no mention of Brexit, despite the end of the transition period in under two months time.

Speaking from Downing Street the Prime Minister said: ‘I want to apologise to all of you who are experiencing the frustrations and the nightmare of the Covid world.

‘I know how tough it has been for you and I’m full of admiration for the determination you’ve shown in persevering through this crisis.

‘I want to thank you for the heroic efforts you’ve made to look after your employees, to make your premises Covid-secure, putting in Perspex screens, all the trouble you’ve gone to in complying with the kinds of diktats that I never believed we would have to impose which, I assure you, go completely against every free market instinct I possess.

‘And, believe me, we will end these autumn measures on December 2 when they expire.’

England’s Chief Medical Officer Professor Chris Whitty yesterday sparked hope that the second lockdown may be over by Christmas when he said there was a ‘realistic possibility’ the measures could be lifted on December 2.

During a grilling by MPs yesterday ahead of today’s vote, he argued there was a good chance England will have moved into a ‘different state of play’. And he said the goal was to ‘move into a series of tiers at the end of that period’.

But he admitted Number 10 would have to consider adopting different rules to ‘match the situation we see ourselves in at the end of this month’.

Asked if the new lockdown that comes into force from tomorrow would work, Professor Whitty told MPs in the Science and Technology Select Committee: ‘If people adhere to it in the way I expect they will, it will reduce R below one… It will make a huge difference.’