By Alice Murphy and Tita Smith For Daily Mail Australia

Chocolate lovers are rejoicing after a woman bought a bar of Caramilk Hokey Pokey in Victoria on Tuesday – despite Cadbury insisting the flavour would not launch in Australia in 2020.

‘My sister just sent me this – did you all know about this?’ she tweeted alongside a photo of the bar, which is a mix of the cult favourite caramelised white chocolate and golden honeycomb pieces.

Rumours about a Caramilk Hokey Pokey creation proved true after swirling on social media in June, but the confectionery giant claimed the flavour would only be sold in New Zealand this year – much to the disappointment of fans Down Under.

Australian author Anna Spargo-Ryan’s sister discovered bars of Cadbury Caramilk Hokey Pokey (pictured) in a Melbourne service station on Monday, despite the chocolate giant insisting the flavour would not be sold in Australia in 2020

The writer tweeted about the discovery, sending Aussie Caramilk fans into a frenzy

‘The combination of Cadbury Caramilk and Hokey Pokey brings together two iconic Kiwi flavours in the one delicious Cadbury block.

‘While Caramilk Hokey Pokey won’t be launching in Australia this year, we’d love to hear if it’s a flavour combo Aussie Caramilk fans would like to see us launch in future.’

Disgruntled Caramilk enthusiasts called for a petition to put pressure on Cadbury to cave and release the new variety in Australia.

‘It’s time to revolt everyone! We now have confirmation that Caramilk Hokey Pokey is only being launched in New Zealand,’ one man wrote in a Facebook post. 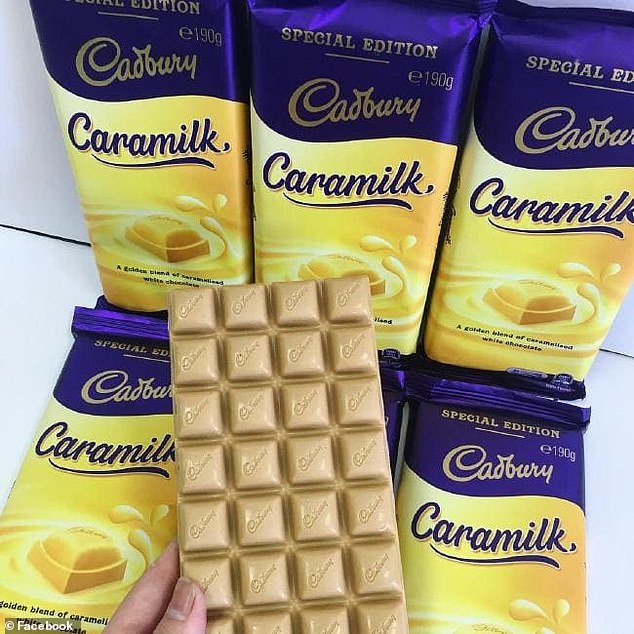 The Hokey Pokey creation is a variation on Cadbury’s original Caramilk bar (pictured), a hybrid caramel and white chocolate bar

‘But Cadbury ‘Australia’ have been known to bow to public pressure before, so why not post a comment on their page and let them know that Aussies want some of that Hokey Pokey goodness too!’

‘I keep sending messages via messenger. Everyone needs to do this on a regular basis,’ a woman replied.

Now it seems the public outcry has paid off just two months later.

Daily Mail Australia has contacted Cadbury for comment as the chocolate giant has been known to tease fans in the lead up to releasing – and re-launching – products.

Last year, the giant remained tight-lipped about confirming its Twirl edition of the caramelised white chocolate bar after photos were leaked online.

The brand did the same thing earlier this year with the comeback of its much-loved Marble bar.