Chris Christie ruled himself out of being Donald Trump’s third chief of staff early Friday afternoon – just over 12 hours after being interviewed by the president in the White House residence for the role.

Christie, the sharp-elbowed ex-governor of New Jersey, is now the third person to publicly rule themselves out of taking the job being vacated by John Kelly.

In a statement Friday he said: ‘It’s an honor to have the President consider me as he looks to choose a new White House chief of staff.

‘However I’ve told the president that now is not the right time for me and my family to undertake this serious assignment.

‘As a result I have asked him to no longer keep me in any of his considerations for this post.’

Trump had claimed Thursday afternoon that he had narrowed the list of candidates to five.

Treasury Secretary Steve Mnuchin and Office of Management and Budget Director Mick Mulvaney are said to be on it.

The president has also been encouraged by some of his advisers to consider his son-in-law Jared Kushner for the job, sources told Reuters — an idea Trump’s aides appeared to pour cold water on.

Kushner and Christie have a log-running rivalry because Christie had been the U.S. Attorney in New Jersey who prosecuted and convicted Kushner’s father and had him jailed.

Former White House Chief of Staff Reince Priebus and outgoing chief John Kelly seemed to enjoy the frenzy that the job opening has created, as they attended a reception for Republican National Committee members.

The pair posted a photo of themselves grinning, Kelly with his arm slung around his predecessor’s shoulders, at the holiday party hosted by the president and first lady at the White House.

Not much to smile about: Jared Kushner was somber as he left his Kalorama, Washington D.C., home – with his rival Chris Christie talking to the president about becoming chief of staff 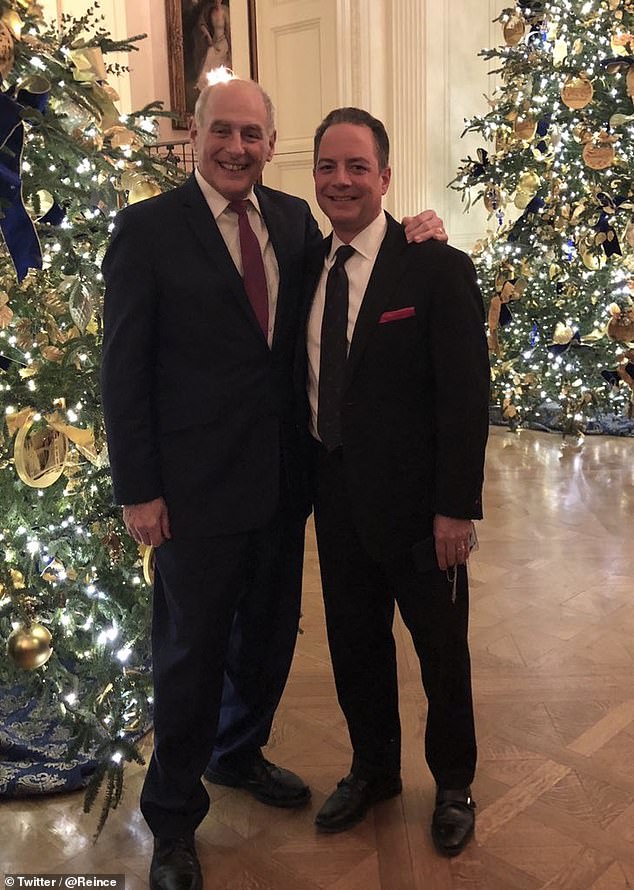 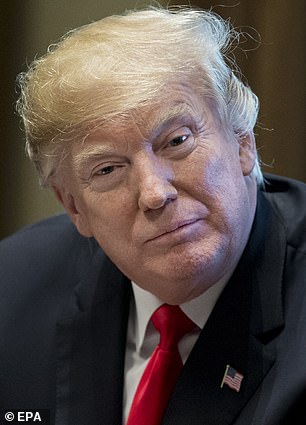 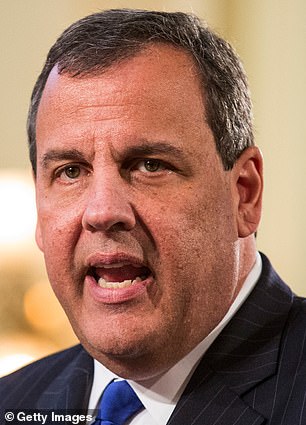 President Trump said Thursday afternoon that he had narrowed the list of candidates to five – and interviewed Chris Christie later that day. It took just over 12 hours for Christie to say he would not take the job

Kelly was slated to leave the administration by the end of the year. His plans were upended when Trump’s first choice for the job turned him down.

A source familiar with Trump’s thinking told Reuters the president had a positive meeting with Christie, confirming a report by Axios.com, and considered him a top-tier candidate for the position.

Deputy White House Press Secretary Hogan Gidley had declined to say whether Christie was on the shortlist as he spoke to reporters on Friday morning after a television a television appearance.

‘The president said yesterday he has about five names in the hopper. We expect him to make an announcement pretty quickly,’ Gidley said.

He also suggested that Kelly could stay longer than anticipated, having already agreed to remain at the helm of the West Wing through the first of the year.

‘Obviously, if the president and the chief of staff make another deal and extend it, they can do that. It’s their prerogative to do so,’ he stated. ‘Right now, currently, John Kelly is expected to leave at the first of the year. The president is also expected to make an announcement imminently. I’m not going to tell you who that’s going to be and I definitely don’t have any tips for you.’

A former New Jersey governor, Christie, a brash, tough-talking politician, was a contender for the Republican presidential nomination in 2016 but abandoned the attempt after a poor showing in the New Hampshire primary. He subsequently endorsed Trump, becoming his adviser throughout the 2016 campaign and running his transition team early on.

He and Kushner have bad blood dating back to Christie’s prosecuting days. He sent Kushner’s father to prison for illegal campaign contributions.

Sources told Reuters that Trump was hearing appeals from some advisers to consider Kushner, a top White House aide who is married to Trump’s daughter Ivanka, for the chief of staff job.

But one person, speaking on condition of anonymity, said Kushner was currently not inclined to pursue the position.

Kushner was reported in another publication on Thursday to have lobbied to become his father-in-law’s chief of staff.

The first son-in-law, already an adviser to the president with an office next to the Oval Office, was reported by the Huffington Post to have pushed his own candidacy and been rewarded with a meeting Wednesday about the role.

He apparently claimed he could work with Democrats – a claim ridiculed by one of the sources for the report who said: ‘I don’t know why he thinks that, when the Democrats are mainly going to be coming after Trump.’

Kushner’s potential candidacy emerged shortly after the president claimed he had five candidates who actually want the job fighting it out.

The claim was met with skepticism in wider Washington D.C. given that Trump pushed out John Kelly without a successor in place, and was turned down by his first choice to replace him.

One source told Reuters that over the last few days ‘numerous people have reached out to the president to suggest’ picking Kushner on the thinking that he is close to the president and has had a number of successes, such as helping negotiate a new trade pact with Mexico and Canada and advancing prison reform legislation.

The president’s spokeswoman said that Kushner was not being considered for the job, as far as she knows, however.

‘I’m not aware that he’s under consideration,’ White House press secretary Sarah Sanders told reporters. ‘But as I think all of us here would recognize, he will be great in any role that the president chooses to put him in.’

‘He has done a tremendous job on a number of fronts, whether it was on trade or what we’ve seen play out over the last week on criminal justice reform. He’s done a great job on all those efforts,’ Sanders said. 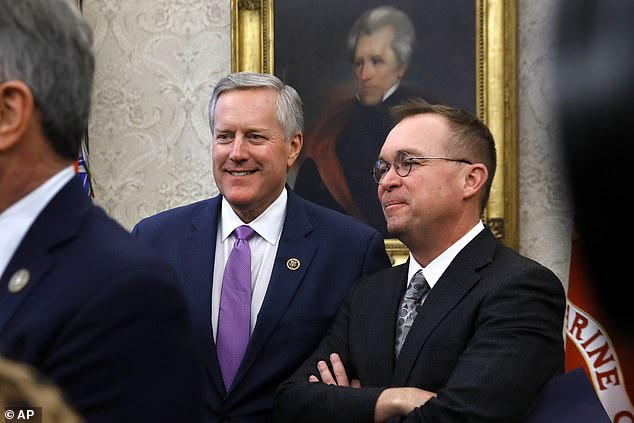 Office of Management and Budget Director Mick Mulvaney (right) is said to be on the president’s shortlist. He is a former congressman

Those urging Kushner include some of the president’s outside advisers and some administration officials, the source said.

‘It’s possible that this is why this is appearing at this moment in time, especially because what everyone knows you need is someone who has a good relationship with the president,’ the source said.

But Kushner is happy with the work he is doing. ‘He’s not currently inclined to pursue it,’ the source added.

Kushner and wife Ivanka had been advocating for Nick Ayers, the chief of staff for Vice President Mike Pence. But Ayers turned down an offer for the position last weekend because he could not commit to the full two years Trump wanted.

One Trump confidant, who asked to remain unidentified, said Trump should just pick his son-in-law.

‘You want consistency, knowing he’ll be here for two more years, just name Jared and let him do it the way he wants,’ the confidant told Reuters.

Another potential pick as chief of staff, former campaign adviser David Bossie, was at the White House for meetings on Thursday, but was not believed to have met with the president.