The brother of late Soundgarden singer Chris Cornell penned an emotional letter on Facebook sharing the pain of his younger sibling’s suicide.

Following Chris’s tragic death, his older brother Peter Cornell took himself off social media, but returned on Monday with a special thank you to fans who are raising awareness about suicide prevention.

‘What a devastating way to have my eyes opened to how many lives around me, and all of us, have been touched by such tragedy,’ he wrote in the lengthy post.

‘Removing the stigma that discussing suicide is like speaking about a dirty little secret. If only … what I’d give to have had the tiniest shred of this awareness in early May.’

The brother of late Soundgarden singer Chris Cornell (above) penned an emotional letter on Facebook sharing the pain of his younger sibling’s suicide.

The father-of-three hanged himself in a Detroit hotel room in May, leaving behind his wife and children.

‘I cannot deny the pain of this loss. In some ways I cling to it,’ Peter wrote.

‘Refusing to let go because I want to keep my little Brother close, even if all that’s left are memories. At least we are rich with memories.

‘I replay them all to often, starting with our childhood and reliving the glory that was Seattle in the 90’s.

‘This process of grief has connected me to so many other grieving hearts and souls. As I said previously, my Brother belonged to the world and so many have been crushed by the weight of this passing.’ 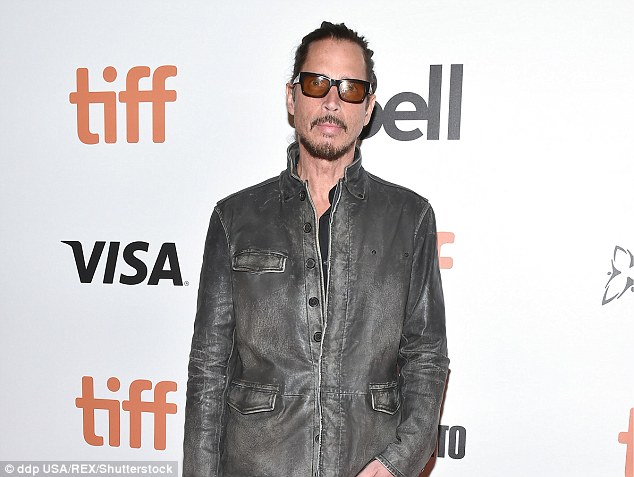 The father-of-three hanged himself in a Detroit hotel room in May, leaving behind his wife and children

He added: ‘Compassion is a new word to me these days. This horror has connected me to family I have not known for many, many years.

‘In some ways my family lost their brother twice. That is a burden I don’t share with them. I’ve grown new ears and hopefully a bigger heart.’

Peter shared that he stopped using social media as a way to keep from ‘continually picking at the wound.’

‘I revived this FB page to return the compassion you have shown to me from the very moments after this tragedy … THANK YOU and THANK YOU AGAIN!!! If it’s possible for this path to walk a little softer, it’s only because I haven’t had to walk it alone.’

He added that while social media has helped his healing at times, he has also witnessed how conspiracy theorists ‘continually attempt to blur the facts.’

‘When is enough enough? Hasn’t the time come for my Brother to be allowed to rest in peace? Haven’t the children endured more than a child ever, ever, ever should?’ he begged.

Peter ended the post with a goodbye to both his brother and Linkin Park singer Chester Bennington, who committed suicide on what would have been Chris’s 50th birthday. 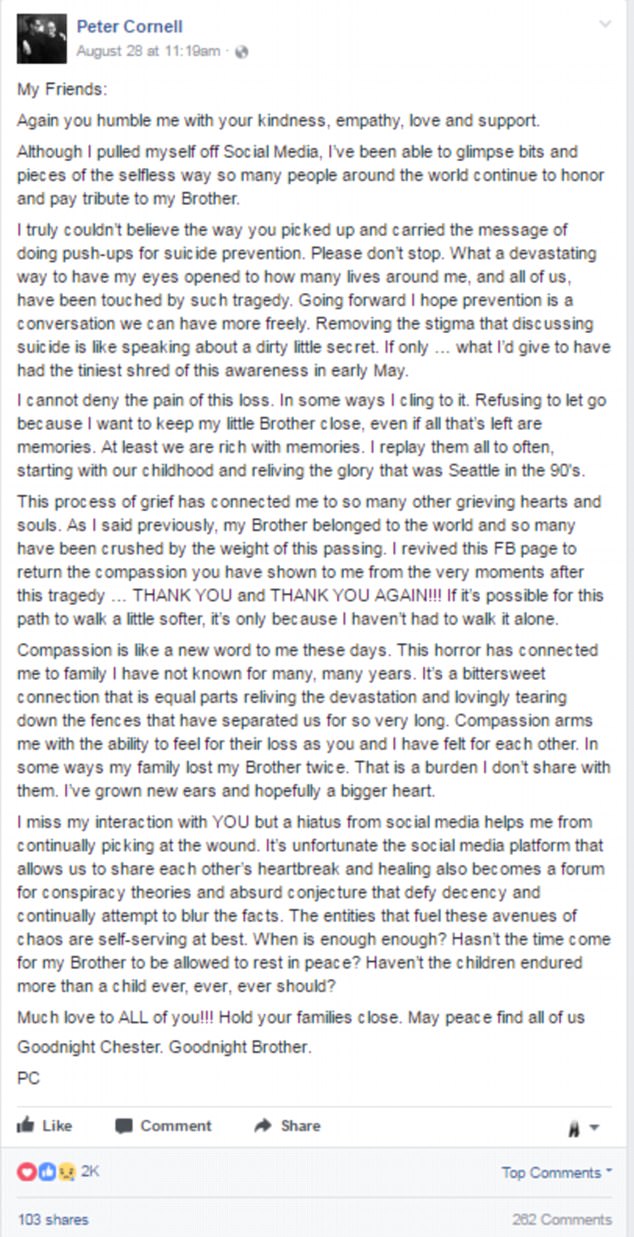 Above is the full note that Peter Cornell wrote on Facebook about his late brother, Chris