The wife of coronavirus-stricken CNN host Chris Cuomo said he is doing ‘slightly better’ more than a week after his diagnosis and revealed his ‘Corona Protocol’ includes testing his oxygen levels daily.

Cristina Cuomo shared an update of her husband’s condition on Instagram Monday after Cuomo, 49, tested positive for COVID-19 on March 29.

‘After one week of up and down symptoms—chills, body aches, total exhaustion, sleeplessness, and a fever that hit 103, he is on day 11 today, (day 1 being first day of allergy-like symptoms), she wrote.

Cristina said that Cuomo was still feels the ‘incredible lethargy,’ but his fever had fallen to 99 degrees for the past three days.

Cuomo’s oxygen levels were also normal after testing daily with an oximeter, a noninvasive device that monitors oxygen saturation.

‘He has maintained his sense of taste and smell, but not his usual hearty Italian appetite,’ Cristina said, adding that his lungs were x-rayed Sunday and were clear.

Cristina included a list of Cuomo’s ‘Corona Protocol,’ which outlined his medicine, diet and exercise while still ill.

Cristina was reportedly cured from Lyme Disease, and her mother breast cancer, with the help of Dr. Lancaster. 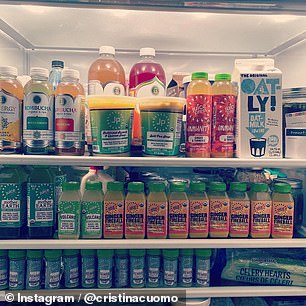 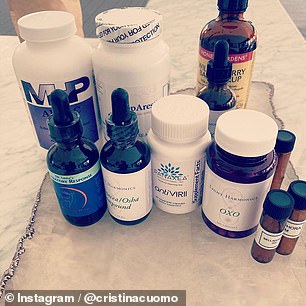 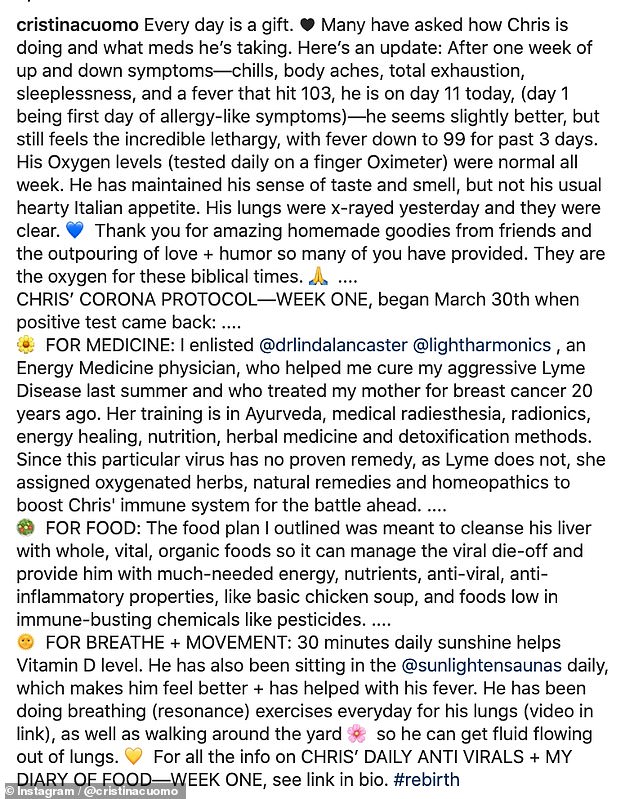 ‘Since this particular virus has no proven remedy… she assigned oxygenated herbs, natural remedies and homeopathics to boost Chris’ immune system for the battle ahead,’ Cristina wrote.

Cuomo’s been eating a nutrition plan of ‘whole, vital, organic foods’ like chicken soup and foods ‘low in immune-busting chemicals like pesticides.’

Additionally, Cristina said Cuomo gets 30 minutes of sunshine, completing breathing exercises, taking walks around the yard and sat in a home sauna.

Cuomo previously revealed that his intense fever as a result of the coronavirus has caused him to lose 13 pounds – and has warned against the dangerous, fake cures that are circulating on the internet.

‘I think we have to be very careful about people preying on desperation,’ he warned as he appeared on a CNN town hall about the coronavirus on Thursday night. 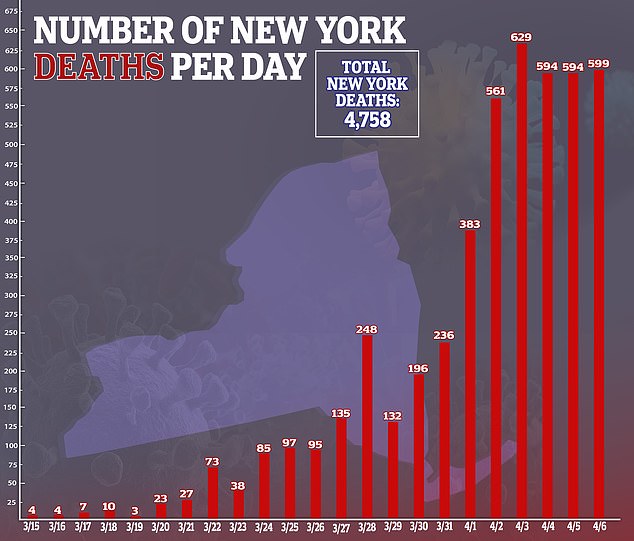 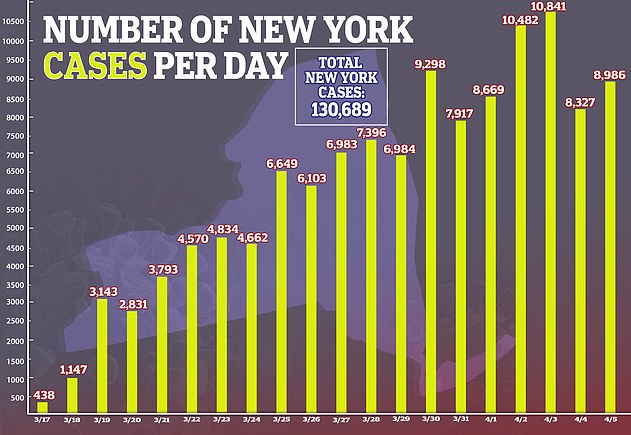 But he did applaud the simple recipe of chicken soup, saying that it was helping to break the fever.

Cuomo has been delivering updates on his condition and the severity of his coronavirus symptoms from his basement having officially tested positive on Tuesday.

He previously revealed that he was suffering a fever so debilitating that he hallucinated a conversation with his late father, former New York Governor Mario Cuomo, had chipped a tooth from shivering so intensely and felt like he was being beaten like a pinata. 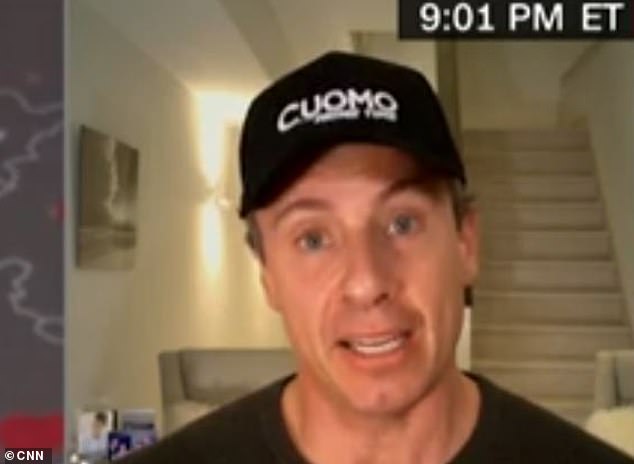 Chris Cuomo has become the most visible face of the coronavirus in the US by giving daily updates about his condition on TV. He dubbed the virus ‘the beast’ on CNN Thursday 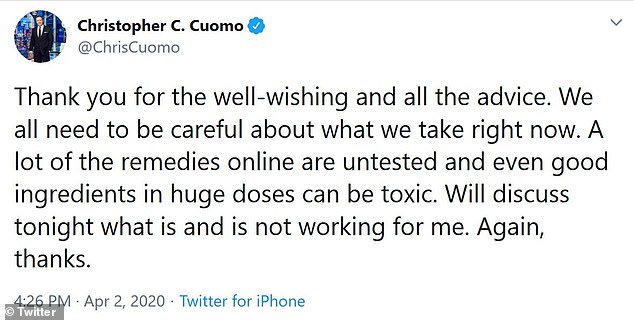 As well as supplying nightly updates from his basement, Chris appeared alongside his brother New York Governor Andrew Cuomo at a press conference on Thursday to speak more about his condition.

His show was replaced by a CNN Town Hall on Thursday but he still appeared provide more information on his experience with the coronavirus.

Cuomo revealed to fellow host Anderson Cooper and Dr. Sanjay Gupta that he had lost 13 pounds in the last three days because the fever was causing him to sweat so much.

‘I’m just sweating it out and it’s the sickness,’ he said.

He issued a stark warning that fake cures are being pushed on the internet by those hoping to take advantage of the vulnerable, scared and desperate. 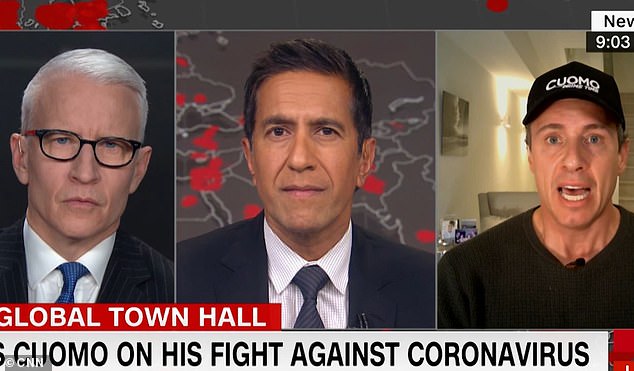 Cuomo revealed to fellow host Anderson Cooper and Dr. Sanjay Gupta that he had lost 13 pounds in the last three days as a result of the intense fever from the coronavirus

‘People are selling a lot of lies and people are buying it up because of the desperation. I get it but they don’t work, there’s no proof in any of them,’ he warned.

‘I think we have to be very careful about people preying on desperation.’

He added that his fever hits worse at night time but that he is continuing with his show despite offers from his CNN co-workers to take a break. 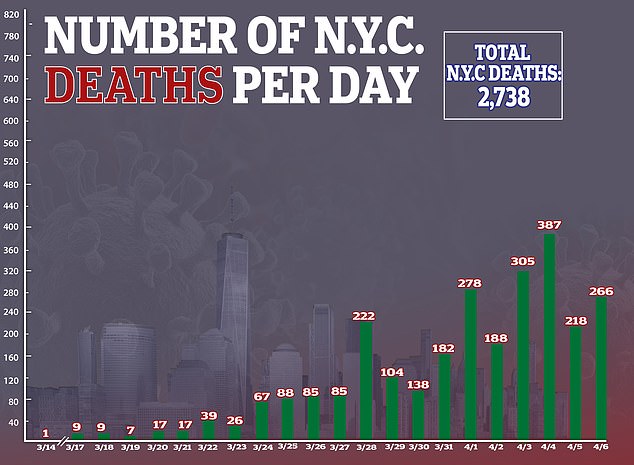 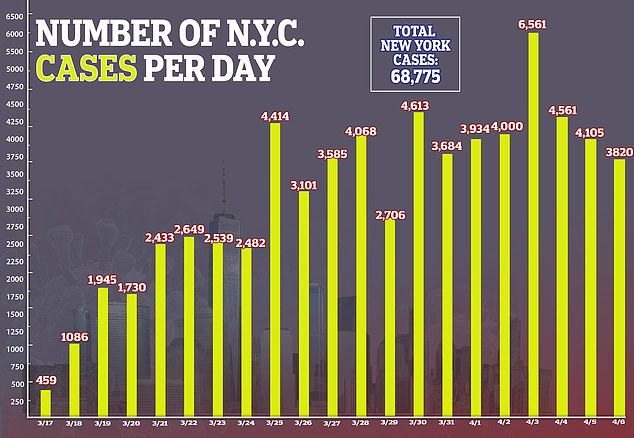 ‘As we know the health care workers have taken to call the virus “the beast”. I understand why. My fever has gone up a couple of degrees in like the last 30 minutes.

‘Nights are tough, and I’ve learned something that I didn’t know before: It is responsible journalism to say that 80% of people who get this, statistically, wind up okay, meaning they don’t get a hospital, they get through it. It is not humanly responsible, though, from an ethical perspective,’ he added.

‘Now that I am one of the anointed and these people reach out to me — you SUFFER when you have this at home, unless you are ridiculously lucky, statistically, and maybe karmically as well.’ 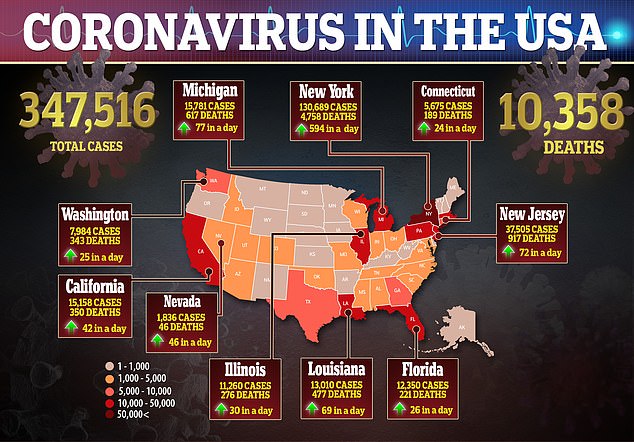 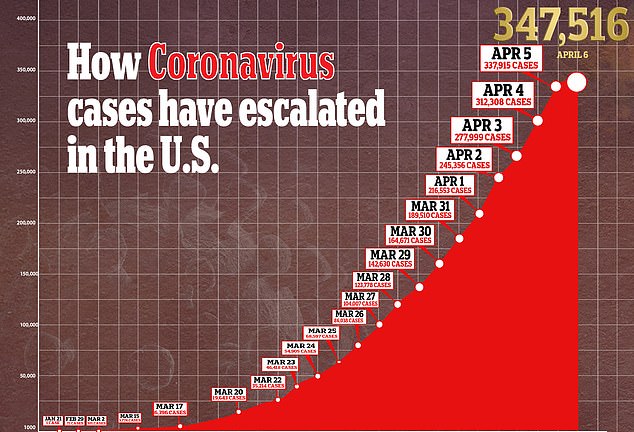 Cuomo also commented on the lack of testing in the country, saying that although he’s spending up to ten hours a day trying to sleep off the fever, he is still actively trying to help New York in finding more equipment.

‘When I do have a couple of good hours, I’m still trying to do help with procurement for the state [of New York] because they really are fighting state by state, which is so stupid, to get the equipment that they need,’ Cuomo said.

‘So, I don’t know how I got it and most people don’t, Anderson, and we are so far behind on testing. We’re telling ourselves these lies about testing. We’re nowhere near where we need to be.’

He had touched on the subject earlier on Thursday when he appeared alongside his brother Andrew for the New York Governor’s daily coronavirus briefing. 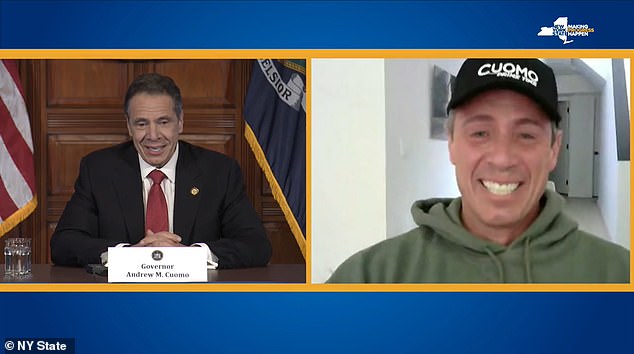 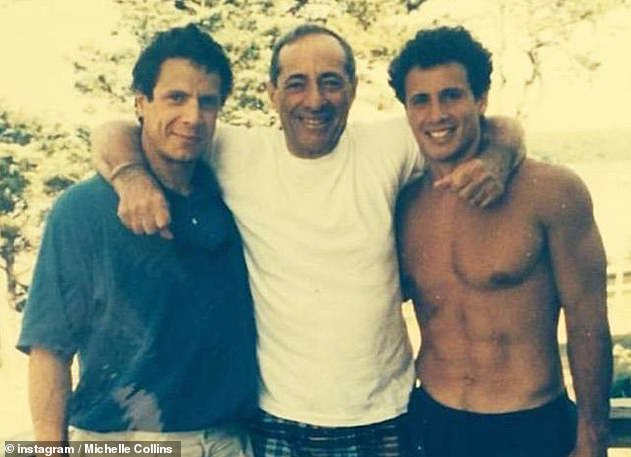 Chris joined the briefing via remote video feed from the basement of his home in New York City, where he was seen casually dressed in a green hoodie and baseball cap.

Chris said: ‘It’s going to be a long slog – now I know the fight I’m in for. I see why it takes people out.

He said he began experiencing strong symptoms on the night he was diagnosed, revealing that the constant fevers have even crept into his dreams.

‘That night I got hit with a fever and rigors, it was like out of a movie. I had hallucinations. I was seeing Pop,’ he said, referencing their late father Mario Cuomo, a three-term New York governor.

‘You came to me in a dream,’ Chris told his brother.

‘You had on a very interesting ballet outfit, and you were dancing in the dream, and you were waving a wand and saying: “I wish I could wave my wand and make this go away,” and then you spun around and danced away.’

‘Obviously the fever has affected your mental capacity,’ Gov Cuomo replied before adding: ‘Well you look good, I have to tell you, comparatively you look good.’ 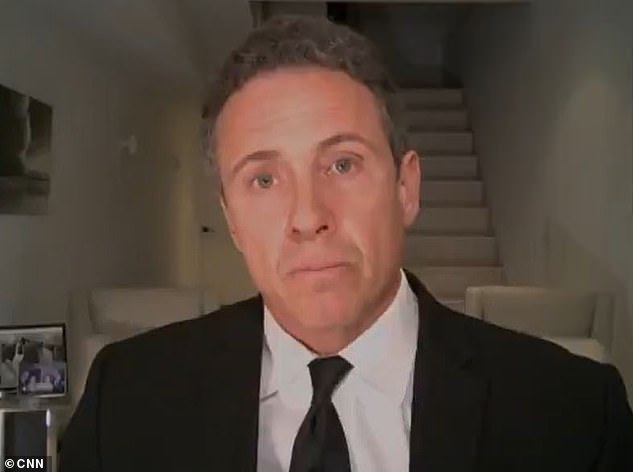 Cuomo is seen anchoring his CNN show, Cuomo Prime Time, from his basement on Monday 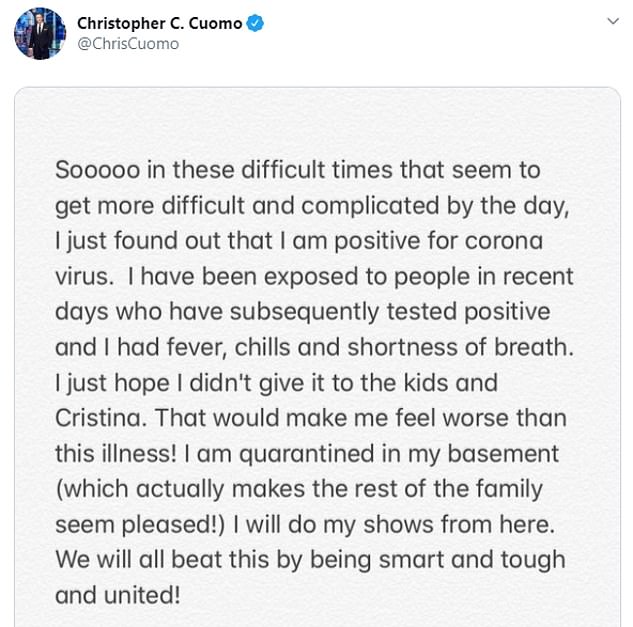 Chris Cuomo revealed he has coronavirus in this tweet on Tuesday

When Cuomo first announced his diagnosis, he assured followers that ‘we will all beat this by being smart and tough and united!’

‘Sooooo in these difficult times that seem to get more difficult and complicated by the day, I just found out that I am positive for coronavirus. I have been exposed to people in recent days who have subsequently tested positive and I had fever, chills and shortness of breath,’ he said.

‘I just hope I didn’t give it to the kids and Cristina. That would make me feel worse than this illness!

The chilling extent of the effect of the virus on his body was only heard on Wednesday when he spoke about the sleepless night he suffered as symptoms ravaged his body.

‘I want you to be thinking about everybody who is not as lucky as I am who are dealing with the same that I am and 10 times worse, especially after what I learned last night,’ he said of his illness.

.@ChrisCuomo: “Care enough to not just to stay home but to stay on our leaders to make sure that they are doing everything they can to limit this.”

“How do you want to be remembered during this time?” pic.twitter.com/zKnIndUGwn

‘This virus came at me — I’ve never seen anything like it, okay? So I’ve had a fever. You’ve had a fever, 102, 103-plus that wouldn’t quit. It was like somebody was beating me like a pinata. I was shivering so much … I chipped my tooth.’

‘So the sun comes up. I was up all night. I was hallucinating,’ he added.

‘My dad was talking to me.

‘I was seeing people from college, people I haven’t seen in forever. It was freaky what I lived through last night.’

Cuomo added that while his fever was intense, he was not yet suffering major problems with his chest or trouble breathing but said he can imagine the worry that is caused by patients who begin to feel this.

‘I get it now. If you match that with chest constrictions and people who can’t breath,’ he said. 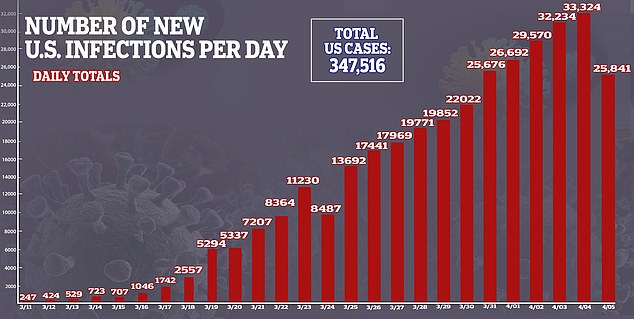 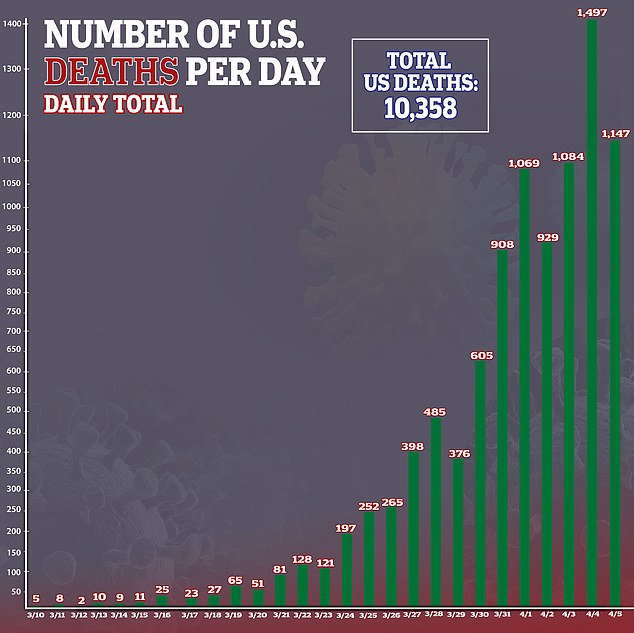