Chris Dawson could be denied bail despite his willingness to post a $1.5 million surety because prosecution argues he could flee using his twin brother’s passport.

The 70-year-old former rugby league player intends to plead not guilty to the murder of the mother of two of his children, Lynette Dawson.

Dawson is willing to pay $1.5 million to get out of prison after he was charged with the murder of his wife on Sydney’s northern beaches in early 1982.

But the crown argued Dawson could use his twin brother’s passport if he wanted to flee the country.

Dawson scoffed at the suggestion, and said ‘you’re kidding,’ after the crown’s argument, 9News reported.

But the judge chose not to make a decision on the matter in Friday’s session.

Instead, he pushed Dawson’s bail application out until Monday.

His lawyer, Greg Walsh, said during a December 6 court hearing his client ‘strenuously asserts his innocence’ and that Dawson was ‘anxious and stressed about the situation’ and planned to plead not guilty. 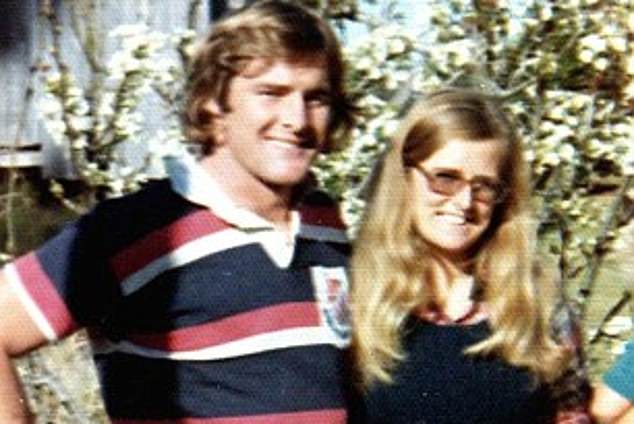 Ms Dawson (right) was 33 when she disappeared in 1982, leaving behind two young daughters

Ms Dawson was 33 when she disappeared in 1982, leaving behind two young daughters.

Her husband reported her missing almost six weeks later, and her body has never been found.

The case was the subject of The Australian newspaper’s investigative podcast The Teacher’s Pet, which brought the case back into the public eye.

NSW Police, which reopened the cold case in 2015, said fresh statements from at least two witnesses led to the arrest of the former Newtown rugby league player on the Gold Coast on December 5.

The accused killer, who was living at Coolum Beach, was extradited from Queensland on December 6.