The sun is setting over one of boxing’s more remote breeding grounds. Another day spent alongside the roosters and Rambo the American Bully.

For Chris Eubank Jnr and Roy Jones Jnr, another 15 rounds on this Florida farm with firearms and new friends.

‘Roy has a whole bunch of animals — peacocks, chickens, dogs,’ says Eubank. ‘I saw a chicken run across the damn gym one time. Where can you ever say that’s happened before?

‘I was able to shoot a few guns on the range and I’ve actually never fished before but Roy caught some fish the other day and cooked it.’

A couple of months ago, the son of Britain’s finest fighting peacock arrived on this Pensacola farm to work with a boxer who, with dizzying speed and reflexes, won titles from middleweight to heavyweight.

The slide was more prolonged. Jones fought until 2018, when he was 49. He racked up defeats and air miles, boxing in Latvia and Russia and earning citizenship from Vladimir Putin. 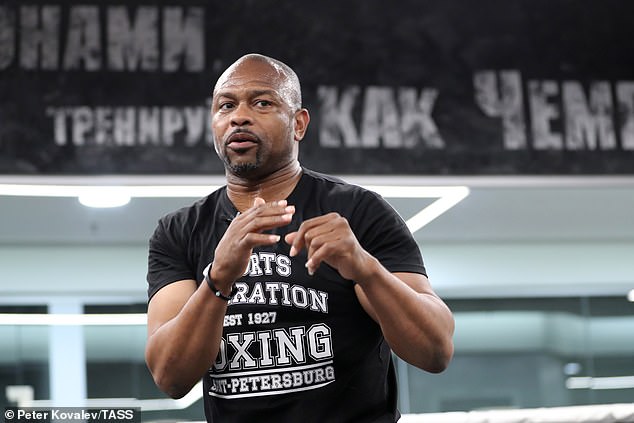 En route up the ladder, Jones even shared the super-middleweight throne with Chris Eubank Snr.

These days, Jones is back home growing more familiar with his new pupil.

‘I didn’t know much about him,’ says Jones. ‘I knew his dad — their personalities are probably a lot different but they both have that brutal punching power.’

It was Eubank Snr who negotiated this new partnership, and when boxing resurfaces after the Covid-19 crisis they are plotting a renewed assault on the middleweight division. 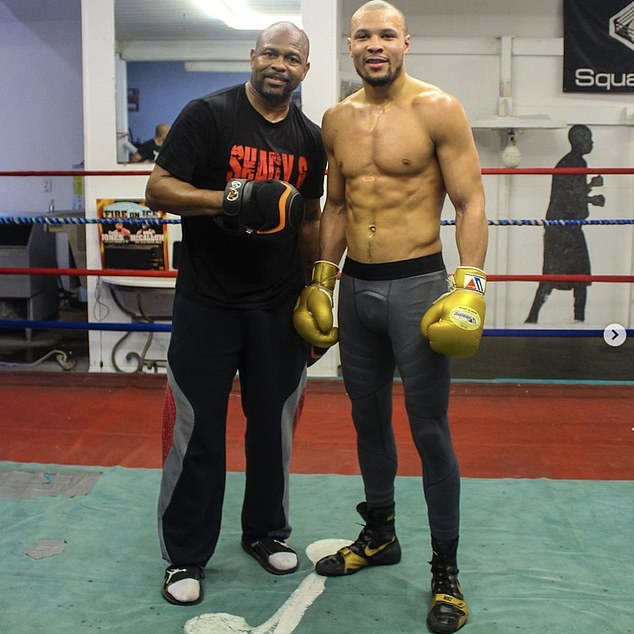 FOR now, life exists only within those farm gates.

‘There really is nothing to do but train,’ says Eubank Jnr. ‘I think they opened the beach up, so I might check that out.’

On this Friday night, though, Eubank and Jones are on Zoom for their first joint interview — speaking to Sportsmail over the constant crowing of Roy’s roosters.

‘I was in Vegas,’ recalls Eubank. ‘I’ve got my apartment out there, my friends, the parties, the girls.’

He had been training at Floyd Mayweather’s gym and enjoying his surroundings. In late February he met Jones at a local fight. When coronavirus plunged the Strip into darkness, Eubank had an ‘epiphany’. The 30-year-old rang his dad and asked him to pull some strings.

‘I think I was on a flight the next day,’ says Eubank. 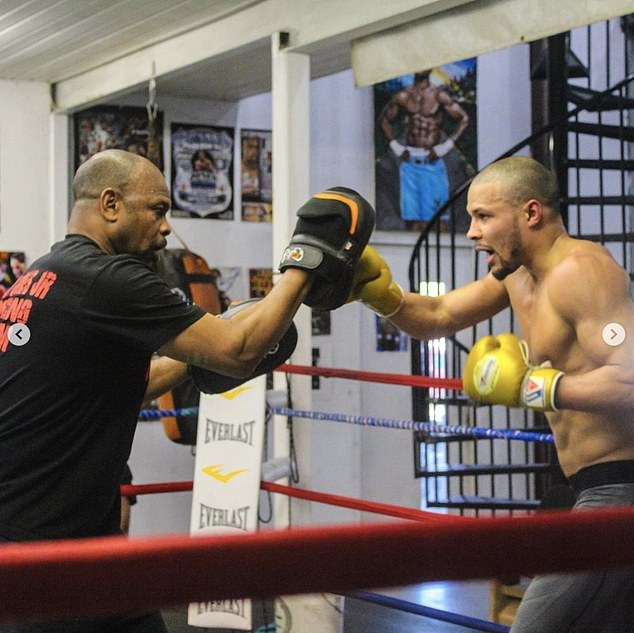 It’s a sharp detour for a fighter who, for so long, had trained himself. For recent wins over James DeGale and Mat Korobov, he worked with Nate Vasquez, who once claimed: ‘His style isn’t meant to be a boxer like Roy Jones Jr.’

Now he is only ‘mad’ it took him so long to meet Jones, whose swelling boxing stable could spread to these shores.

Jones confirms: ‘A friend of mine told me there are some guys he knows who want to do a gym in the UK in my name. If that’s the case, then I might. I think somewhere near Huddersfield town.’

Eubank will be the highest-profile test of whether Jones can help bamboozle opponents outside the ropes, too.

‘I do a lot of mental training,’ says Jones. By adding more method to his malice, Eubank can be a ‘super-duper-awesome fighter’. 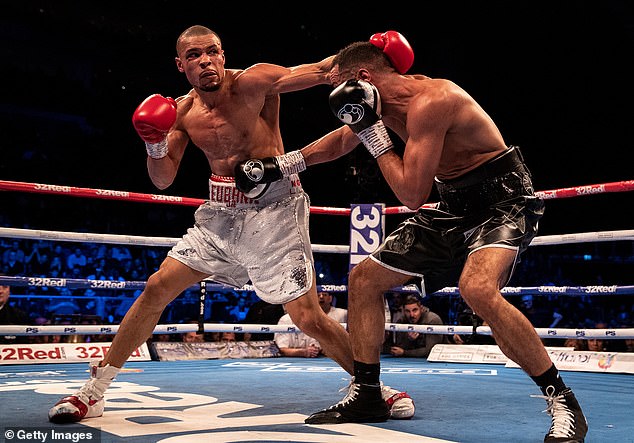 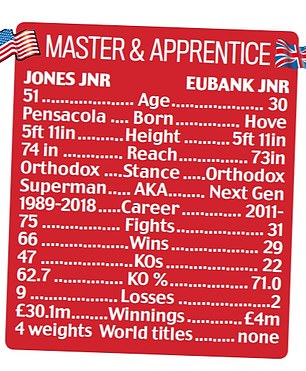 ‘That’s definitely a part of my game that I feel needed improvement,’ adds Eubank. ‘I’d been doing the same thing for a long time. And when you do that, you’re not thinking, you’re just going through the motions.’

Jones once said fishing helps train the mind — at sea, as in the ring, you need to snap into focus at the slightest twitch — and adds: ‘I’m going to take him out on the boat, do some deep-sea fishing.’

In Eubank’s sights when boxing returns are the sport’s biggest names.

‘I want Canelo Alvarez, Gennady Golovkin, the Charlos twins (Jermall and Jermell), anybody who has a belt in the middleweight division — those are the guys we’re going to gun for.’

It all comes after a yo-yo 2019, which began with an impressive win over rival James DeGale but ended with only two more rounds after Matt Korobov injured his shoulder during their December showdown.

Eubank says: ‘That’s why I’ve stayed out here with Roy because I just want to be ready as soon as a card is available. These are my prime years now, I need to be in the ring as much as I can.’

He will still float between 160 and 168lb. But Eubank has previously sparred heavyweights, so could he follow Jones up to the big boys?

‘We’re different animals,’ smiles Eubank. ‘I can’t go any higher than super-middleweight. Will that change in the future when I’m 34, 33? I don’t know.’

CHRIS Eubank Snr has called a few times and Jones says: ‘Just to talk about it and ask how he’s doing.’ Any fears dad may have that Junior will be blown off course are unfounded.

‘If he’s out doing something crazy, someone will call me,’ adds Jones. ‘I don’t have to worry about nobody robbing him or anything — they know me and have that respect for me.’

The signs are certainly encouraging.

‘I haven’t had anyone to continuously train me like Roy is,’ says Eubank. ‘I was left to my own devices. It worked up until a certain point but once you’re at that elite level you need someone who’s going to be on you at all times.’

Jones was put through a fierce regime by his now-estranged father from age six. Eubank, by contrast, was kept away from boxing until his teens. ‘I’m refining what he’s got but I do teach him things that he probably missed out on,’ says Jones. ‘I drill the basics like it got drilled into me. Footwork, head movement, feints.’

Together, they hope to write a new chapter in boxing’s long history of sons who follow fathers into the ring.

‘It is a tradition but it’s not a successful one at all,’ says Eubank. ‘The odds were severely stacked against me to become anything. I lived in a big house, I went to private school — that doesn’t harness hunger. Hunger comes from poverty and broken homes and a tough upbringing.’

Still Eubank has scaled the heights. Now, beyond his 30th birthday, he and Jones embark on a new beginning.

‘I’ll be able to perform at the highest levels for many more years,’ insists Eubank. ‘The exit strategy? I’m not anywhere near that.’

Tomorrow morning the roosters will crow once more and the sun is still rising on this bond of boxing dynasties. 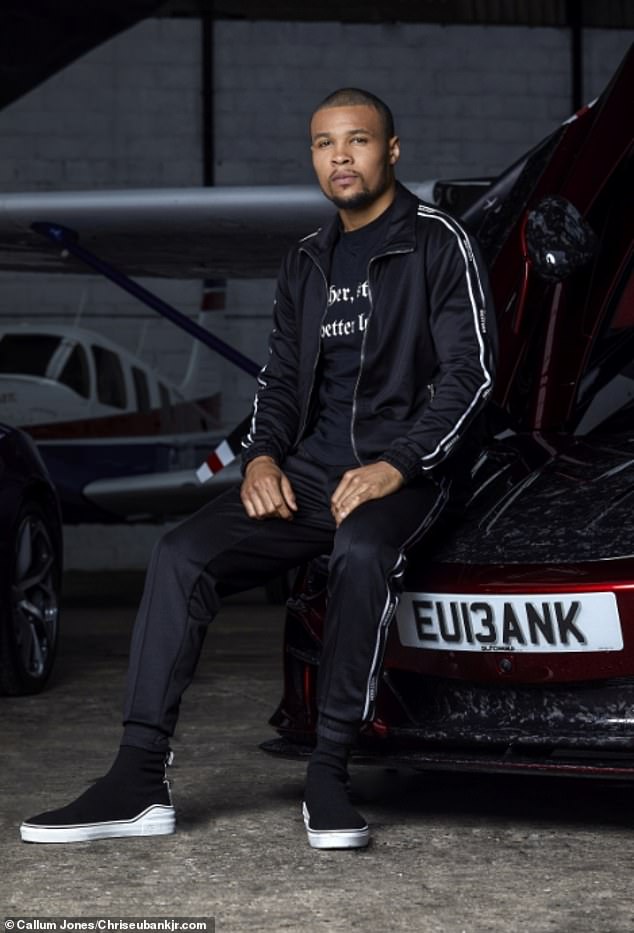 ‘Chris Eubank Jr wearing his Next Gen Speedster Collection which is supporting Chain of Hope Charity’ at www.chainofhope.org/