My mum had a birthday last week. Quite a big one – 92 to be precise. Which makes the fact that she can see the settings on her microwave, whereas I can’t, even more annoying.

And how about this? Radio 2 celebrates turning 50 this weekend, which means it is one year my junior. This makes no sense whatsoever. How can the station I listened to as a kid with Terry Wogan already doing the Breakfast Show now be younger than me? And lo, yet another alarming milestone. 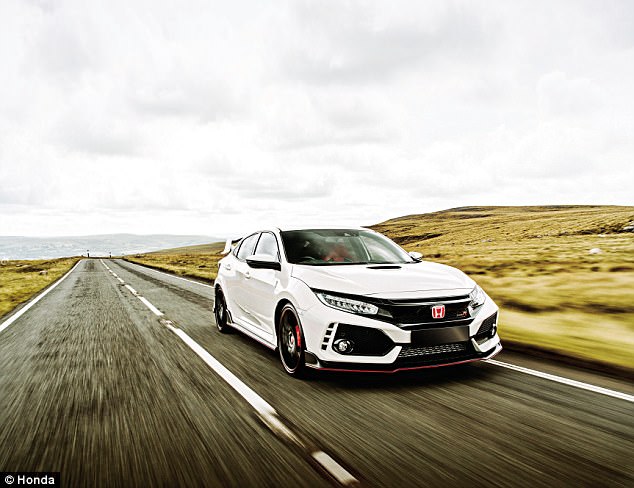 From whichever angle you choose to survey this Eastern turbo-charged terrier, it is impossible to escape another blade here, another fin there, go faster bulges everywhere

Can you believe that this year sees the 20th anniversary of the Honda Civic Type R? No, me neither. And what a way to celebrate. Get a load of this. If discretion, elegance and class float your boat, then please move on. Rest assured, there is nothing to see here.

This is the new Honda Civic Type R GT, the mere sight of which will have you holding your head in your hands, tearfully wondering to what new depths humankind must have stooped in order to crave stimu stimulation from such an outlandish and perverted offering.

This is a no-holds-barred raving lunatic of a car, the antithesis of everything Shakespeare, enough to make Mary Berry throw herself into a cesspit of soggy bottoms. It’s creations such as this that threaten the very fibre of Strictly Come Dancing and the calm and moral cache of Cash In The Attic.

Japan is once again on the march, this time with the devil child of guerrilla car design, coming to terrorise a pay and display car park near you.

Not that the new Type R GT doesn’t give you a heads-up in case you want to run for the hills. There’s no stealth going on here. Even though I’d seen countless images of the car, nothing prepared me for the sheer unbridled audaciousness of a design department gone ga-ga.

It reminded me of the outrageously unapologetic Lamborghini Countach, the official enfant terrible of Seventies automotive hedonism. And why the heck not, Honda? What millions of people thought was an abomination back in 1974 is now considered a design classic, often voted among the top five most iconic supercars of all time.

From whichever angle you choose to survey this Eastern turbo-charged terrier, it is impossible to escape another blade here, another fin there, go faster bulges everywhere. (Hot Wheels – increasingly, you have so much to answer for).

Whether any of this chaotic collage of scoops, intakes or flicks serves a single aerodynamic or engineering purpose (although Honda claims ‘real’ downforce) is irrelevant. What matters most is that no one will be left in any doubt that what just flashed past them is the most nut-job-looking road-legal hatchback of all time.

Are we talking officially Marmite then? Probably, although I can’t say for certain. All kids that saw it loved it, and most blokes did too. Personally, I think it’s more hilarious than hideous, and the more time I spent with it the more it grew on me, especially the front. 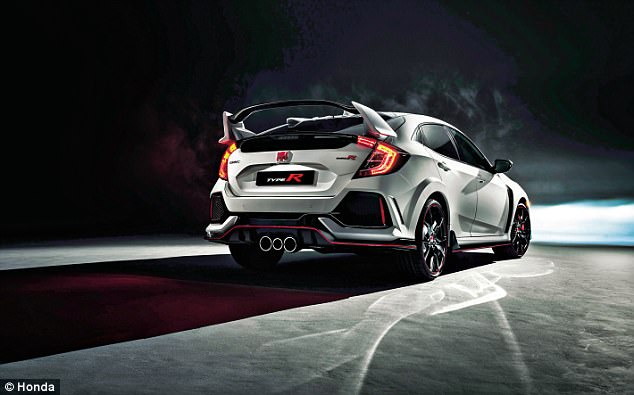 Though I can’t make up my mind if the grinning grille is more reminiscent of a proud schoolboy beaming at the thrill of his first class photo, or the menacing scowl of the best movie villain of all time, Heath Ledger’s Joker in The Dark Knight.

Will anyone buy one? Absobloomin’- lutely. Or at least, I sincerely hope so. I would implore any disciple of the hot hatch remotely interested in a new set of wheels to book a test drive in this 169mph demon.

The first encounter that sets the endorphins racing is the ice cool, brushed-steel gear lever, the magic wand to all that lies ahead. This is a truly sweet gearbox, with its short throw, sharp and precise gate instantly stirring pangs of seller’s regret with regards to my old Lotus Evora.

This six-speed manual gearbox is the only setup available. That’s it, like it or lump it. But the bonus is that it therefore enjoys the luxury of not having been designed with any potential compromise in mind. In short, it is free to just be. Plus, Honda has also incorporated an automatic blip on the downshift to help match the revs.

This makes for a much smoother, much more efficient transition, while conning anyone listening into thinking you’re a god of the dark art of heeling and toeing. This is also the first time the Type R has been designed with three driving modes: Comfort, Sport and +R, as opposed to just  sport and +R.

Three settings that are refreshingly dynamic enough from each other for even the most insensitive Neanderthal to be able to tell the difference. For the first time in any car, I preferred the most extreme +R mode over the other two. The car feels much more planted and less unpredictable once all the big-boy gizmos kick in. The front end actually calms down the quicker the world flashes by, while the weightier steering makes it easier to aim the wheels more accurately in the intended direction of travel. From this point on, everything is a hoot.

Because of the Type R’s massive footprint (along with that alleged downforce), cornering and road-holding comes so easily. In fact I was so inspired with confidence, I even ventured  off-road on the way to my mum’s a few times, to have my own private Colin McRae moment.

And despite the 316bhp engine being ridiculously powerful for a frontwheel drive car, that silky smooth transition up and down the box had me grinning like the proverbial Cheshire cat for the duration. As a pure driving experience, there is nothing not to like.

And so to the rest of the ‘offer’. Just as important as the fun on the run is the position of your bum, the meat in the seat if you will. In which case, welcome to what are more like RS thrones than anything you might expect to find in a ‘compact sports hatch’ – they are massive, yet still manage to be low-slung, to get the driver as close to the action as possible. 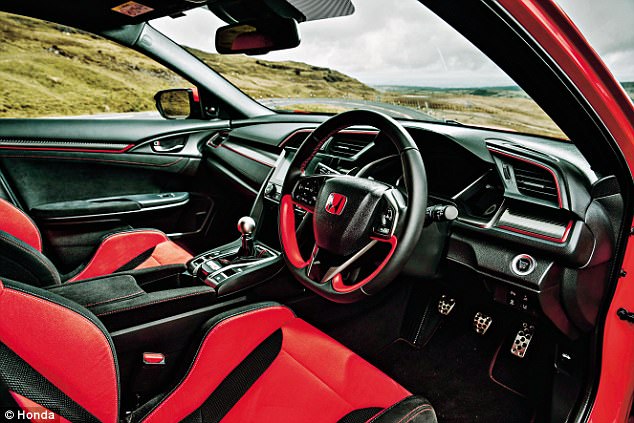 The steering wheel-mounted controls aren’t all that great, more Sega Megadrive than state of the art, but that’s about all there is to moan about

And there’s so much space! Heaps of it all over the place, from the leg and head room in the back to a relatively huge boot for a hatchback. So what’s the bad news ? Well not much, really. The worst thing about the car is the infotainment system, which is as bad as the rest of the car is good. It’s like one of those really bad websites that, regardless of how  much you might want whatever it’s offering, you can’t be bothered to muddle through whatever process is required because the hotchpotch of a screen is making you nauseous.

The steering wheel-mounted controls aren’t all that great either, more Sega Megadrive than state of the art, but that’s about all there is to moan about.

In conclusion, I was never very good at science at school but I do remember the gist of Newton’s Third Law: for every action, there is an equal (in size) and opposite (in direction) reaction force. In which case, how about we cite this excellent value-for money all new Civic Type R GT as Newton’s response to Audi’s pricey RS 3 from last week?