Chris Evans is ‘gobsmacked’ by how good the new Kia is

Well here we are, seven days on from our most retro Christmas ever. Completely by coincidence, Mrs Evans and I went vintage on each other in the present stakes. I bought Tash a Seventies Polaroid camera and she bought me a vintage folding picnic table and chairs, which I absolutely loved.

Not that I was the first to road-test my new gift. Our two boys, Noah and Eli, were straight in there when it came to Christmas lunch. They had their own mini-feast going on next to the grown-ups’ table. Cute doesn’t even begin to cover it, and very handy too as it happened. With the unexpected arrival of a couple of waifs and strays, the main table ended up being a little too cosy.

My car-mad cousin Andy was one such late attendee. ‘Are you going to get your hands on the new McLaren Senna?’ he asked. 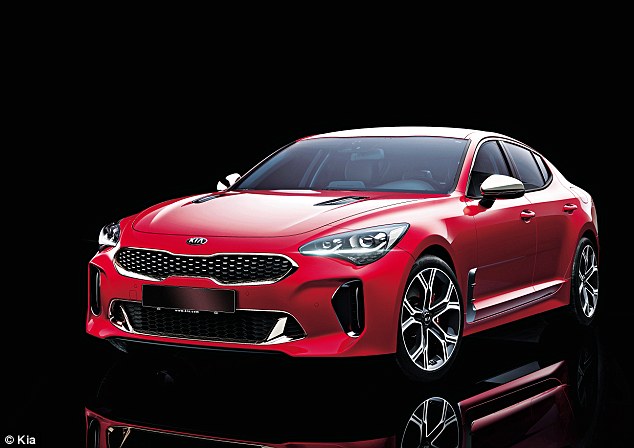 It’s actually a Kia. And not just any old Kia – it is the most audacious Kia ever. A Kia that no one can quite get their head around being a Kia at all 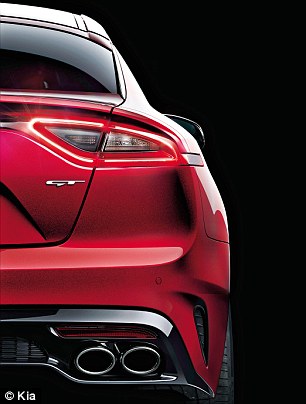 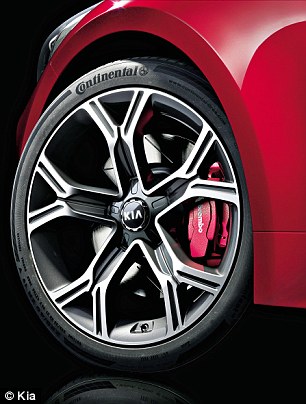 Kia is not supposed to make cars like this, which look so brutishly handsome and have massive Brembo brakes and Michelin tyres sticking out of their wheel arches

‘And what about the new Lamborghini Urus SUV?’

Andy is also now Noah and Eli’s favourite relative, after a killer tip to help power-slide the remote-control cars Santa brought them.

‘All you do is wrap sellotape around the rear wheels and start power-sliding and drifting to your heart’s content,’ he said.

A few seconds later and…

It’s actually very impressive. Borrow a remote-controlled car from a kid near you and give it a go. Or, alternatively, book a test drive in this week’s review car and try out the real thing.

‘Is it a Jag?’ they asked me. ‘Is it an Alfa Romeo?’ they puzzled. ‘Is it the latest drop-dead-gorgeous creation from that secret design bunker Ford has hidden in a desert in the middle of nowhere?’ they demanded.

But it’s a no to all of the above.

It’s actually a Kia. And not just any old Kia – it is the most audacious Kia ever. A Kia that no one can quite get their head around being a Kia at all.

I mean, where did this come from? How very dare they? Kia is not supposed to make cars like this, which look so brutishly handsome and have massive Brembo brakes and Michelin tyres sticking out of their wheel arches. Look at those lines, that profile, those Maserati-style wraparound rear lights, the Jaguar heritage signature vents. Steal from the best, why don’t you, Kia. 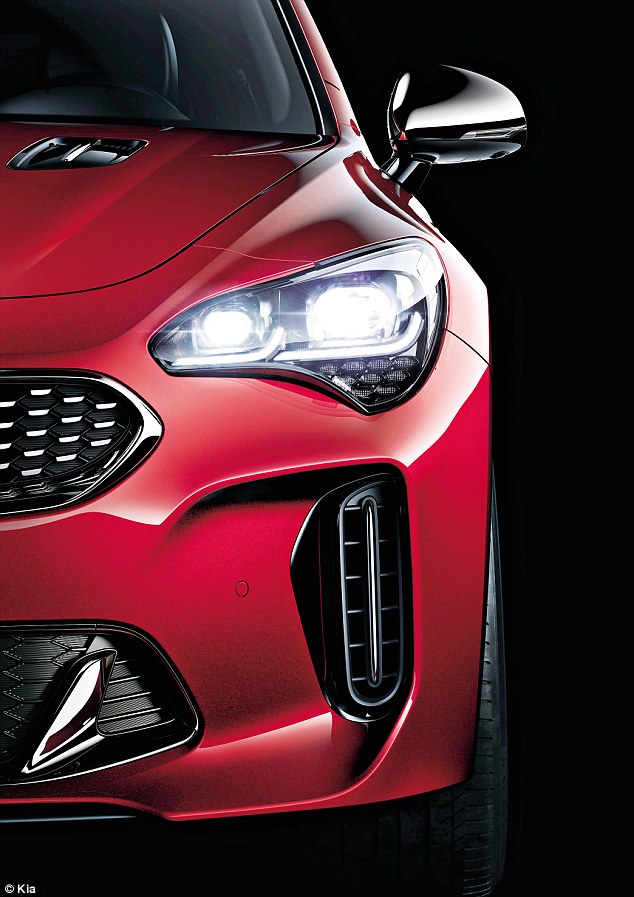 No matter which way you look at it, Kia’s surprise sports saloon has landed fully formed, immediately ready to take its place alongside the big boys

And what a name, the Stinger. Everyone loves it. Never before have I seen and heard the name of a new car repeated so often in print or on camera.

‘The Stinger this, the Stinger that.’ People can’t help themselves. The best new name for a car in ages.

So what’s the Stinger like up close and personal?

Well, it gets even better.

Inside is as sporty as that devilish profile. Leather sports seats, satin silver trim. Well thought-out everything. Attractive, ergonomic – all you’d expect from a top-class grand tourer and from scratch. That’s what is most impressive. It looks like this is the latest model from a manufacturer who’s been churning this sort of car out for years.

The only slight negatives being that when it comes to space in the boot and the rear passenger compartment, there are roomier family GT sports hatchbacks, but usually at the expense of the overall aesthetic. That being the case, I think we’re all agreed that in the case of the Stinger, Kia has got the balance pretty much spot-on.

Enough about the show, now what about the go. Surely Kia can’t have nailed that first time out as well. That just wouldn’t be possible, would it? Oh yes it would.

What we have here is 3.3 litres of turbocharged V6 muscle waiting to be unleashed to the tune of 365hp and a whopping 510 lb ft of torque. No need for sellotape here, m’ dears. Just select Sport + out of the five available driving modes and wahey, off you go. Especially at this time of year, with the roads at their most mischievous. Actually, you do have to be quite careful – twitchy would be an understatement if you accidentally get a bit right-foot-heavy.

In all the other driving modes, however, this new beast on the block is far more manageable and, again, almost unbelievably refined for a car literally from nowhere. It’s poised and planted and smooth up and down the gears, the engine and transmission working in perfect harmony, like a seasoned double-act.

No matter which way you look at it, Kia’s surprise sports saloon has landed fully formed, immediately ready to take its place alongside the big boys of BMW, Mercedes and Audi. Kia itself even dares to mention the Porsche Panamera in the same breath. I love it! And with the Stinger hitting 60mph in 4.7 seconds, why the heck not? 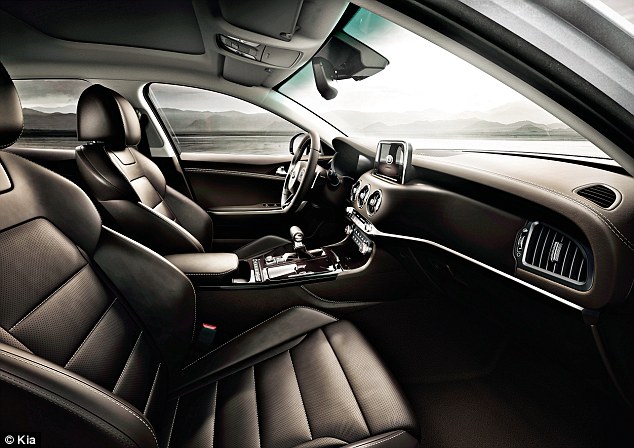 Inside is as sporty as that devilish profile. Leather sports seats, satin silver trim. Well thought-out everything. Attractive, ergonomic – all you’d expect from a top-class grand tourer

All everyone has to do now is get their head around having a Kia badge on their drive as opposed to one of the designer darlings. Not that I think Kia’s bosses are bothered about such trivial matters. They know that future generations will shop around more than ever before, and if the stats and pennies stack up for all the right reasons, they won’t give two hoots about 100 years of past glory if they are being charged double for the pleasure.

Here’s a ruse. How about a New Year’s resolution to consider motoring options never previously on your radar? In which case, Kia needs to be prepared. The one thing it may not have fully bargained for is just how good its first attempt at the luxury sports market has turned out to be.

With an 800hp 4.0-litre turbo V8 and extreme aerodynamics, it will offer savage performance when it arrives next year. 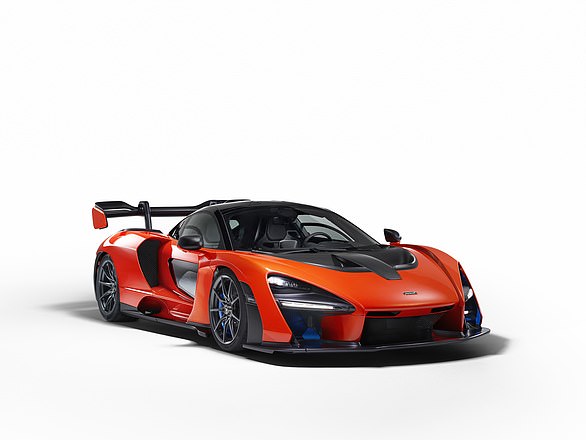 The £750,000 Senna, McLaren’s all-new flagship, is in essence a road-legal racing car 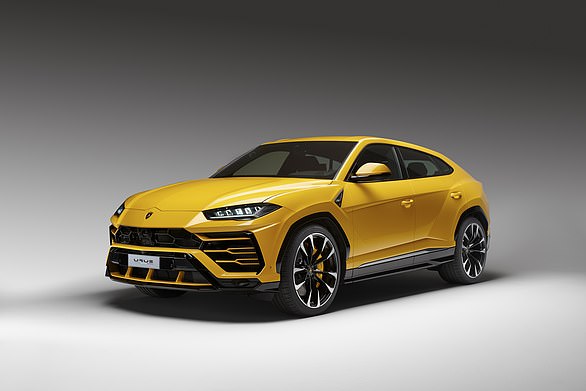 Only 500 are to be built, and they’re all sold. You’ve got more chance of getting your hands on a Lamborghini Urus, the ‘world’s first super-SUV’, which offers scintillating performance (0-6mph: 3.6s, top speed: 190mph) in a more manageable package than the McLaren. It’s due here in the spring, priced from £131,500.