Chris Gayle denies exposing himself to a female masseuse

Cricket superstar Chris Gayle has denied exposing himself to a masseuse in a dressing room in what his lawyer says was a vicious, savage and false media attack.

Bruce McClintock, SC, who is representing Gayle, told the NSW Supreme Court on Monday a series of articles published last year had defamed his client by accusing him of the ‘quite foul’ act.

‘They intended to blacken his name,’ Mr McClintock said.

‘They intended to damage the reputation of my client. They wanted to destroy him.

‘They knew what they were doing. It was a vicious and savage and false attack.’

In his opening address Mr McClintock outlined his client’s background.

‘He has given enjoyment to millions of cricket fans around the world since he started playing international cricket.’ 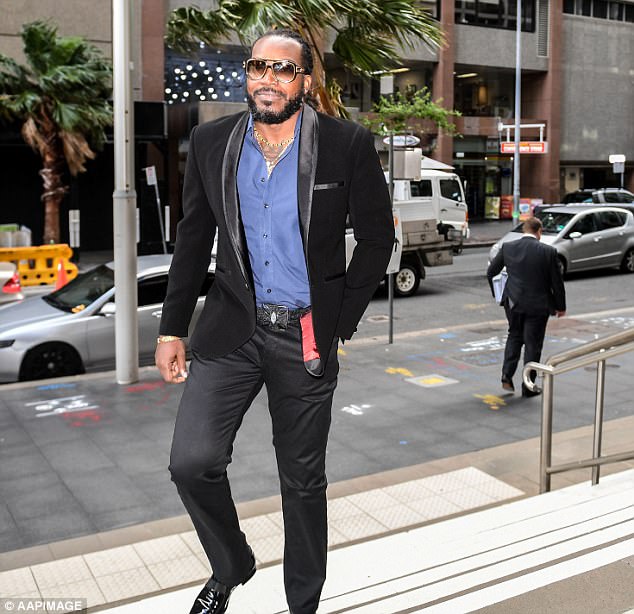 Gayle had grown up in ‘considerable poverty’ and become a Test, One Day International and T20 star, McClintock said.

‘Through a combination of raw talent at cricket and hard work … he lifted himself out of that poverty,’ Mr McClintock said.

Gayle has begun giving evidence in a trial that will also hear from the masseuse, Leanne Russell.

After easing his 191cm (6’3′) frame into the witness box Gayle gave evidence he was one of six siblings – five boys and one girl – who slept in one bedroom, three in one bed, two in another and the last on the floor.

‘I am proud of my achievements, to be honest with you,’ he said.’Of all of my brothers I wasn’t the most talented one.’

After stating, ‘I don’t really follow my stats, to be honest with you’, Gayle told the court he had scored 15 Test centuries, 22 ODI centuries and 18 in T20 games.

He had suffered heart problems since age 16 and made a promise to himself after major surgery.

‘I made a vow I would live life to the fullest and no one would ever stop me,’ he told the court. 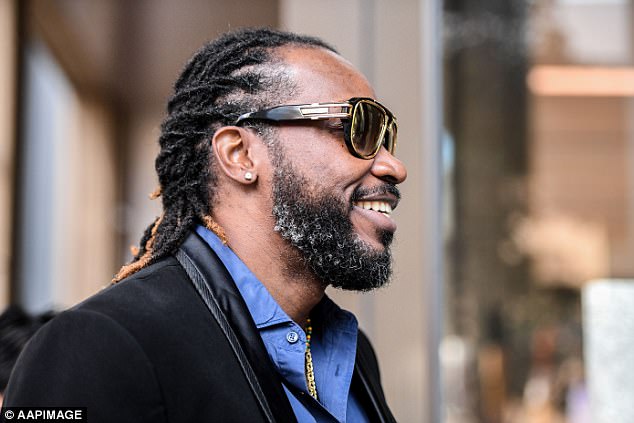 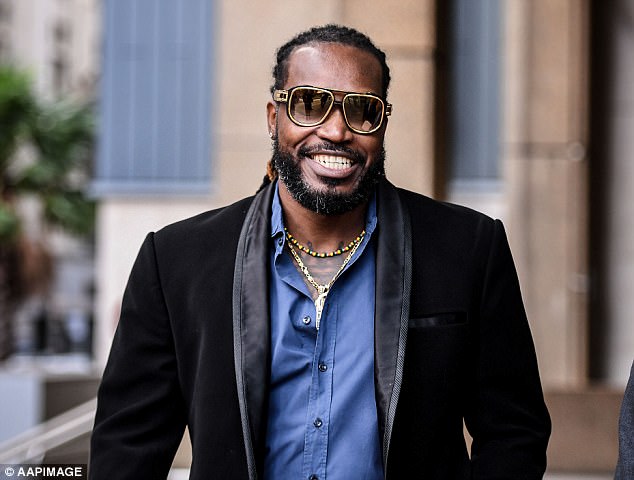 He told a jury of three women and one man he believed anyone who exposed themselves in such a way should be punished.

When Mr McClintock asked, ‘Did you expose yourself to Leanne Russell?’, Gayle said, ‘No’.

The 38-year-old claims a series of 28 stories defamed him by suggesting he ‘intentionally exposed his genitals to a woman in the West Indies team dressing room during a training session at the 2015 World Cup.’

He further claims the articles defamed him by suggesting he ‘indecently propositioned’ Ms Russell during the same incident.

The former Test captain says the articles brought him into public disrepute, ridicule and contempt, damaging his personal reputation and commercial brand.

The disputed articles appeared in The Sydney Morning Herald, The Age in Melbourne and The Canberra Times.

The newspaper publishers are defending the action, claiming the allegations were true. 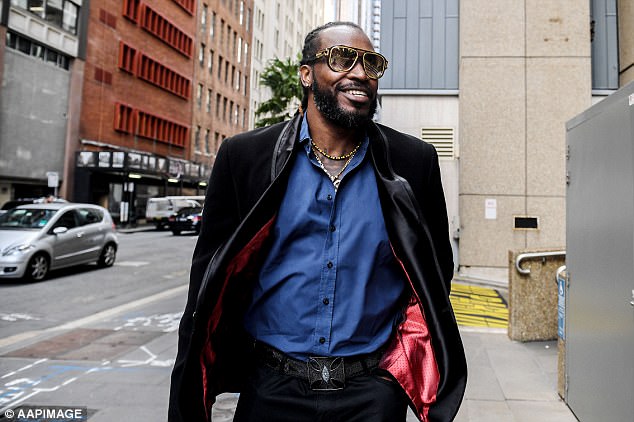 Gale claims he was defamed by The Sydney Morning Herald, The Age and The Canberra Times

They state Gayle exposed himself to Ms Russell while his team was training at Drummoyne, in inner-western Sydney, on or about February 12, 2015.

Gayle said in court this morning that he often suffered muscle soreness and required regular massages.

‘Oh yes, for me, very important,’ he said of massage therapy. ‘I love massages. For me, it is important to be loose at all times.’

Gayle said Ms Russell had massaged him in the past but not during the 2015 World Cup.

But the publishers state Gayle exposed himself to Ms Russell by partially pulling down a towel that was wrapped around his waist in 2015.

However Gayle says he never wore a towel in the dressing room and did not use Ms Russell as a masseuse.

‘She wasn’t a good masseuse,’ Gayle told the jury. ‘She wasn’t good for me, I should say.’ 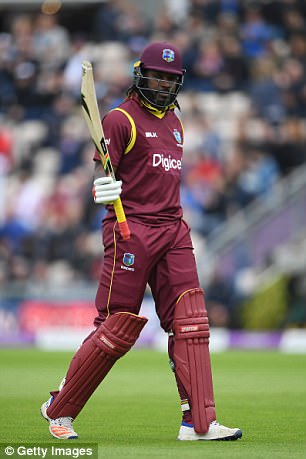 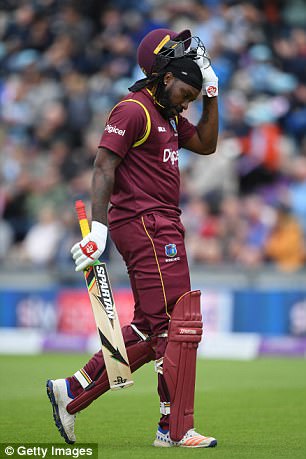 The newspaper reports followed an encounter between Gayle and then Channel 10 sports reporter Mel McLaughlin in an interview during a Big Bash game in January last year.

‘I wanted to come and have an interview with you as well, just so I can see your eyes for the first time,’ Gayle had said.

‘Nice. So hopefully we win this game and we can have a drink after. Don’t blush, baby.’

Asked about that encounter with McLaughlin, Gayle denied the presenter had seemed uncomfortable.

‘She was smiling, like a smirk on her face. She wasn’t uncomfortable.’

Asked if he had been criticised for sexist behaviour after the interview, Gayle said ‘What is “sexist”?’

The newspaper publishers claim the masseuse stories which ran after th McLaughlin incident fall under qualified privilege because they were of legitimate public interest.

Gayle said the allegations ruined him: ‘I felt devastated at the particular time. This is my livelihood and for someone to come and accuse me, that is the most hurtful thing I have ever come across in my entire life.’ 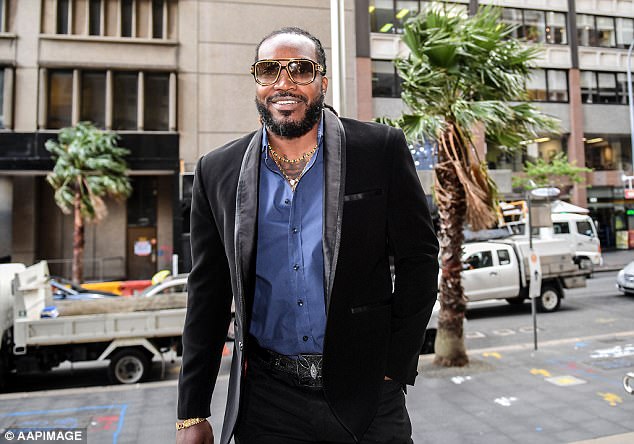 ‘I’ve never been to a court before. This is my first time. It’s nerve-wracking to be honest with you. But because of the case and the scenario I have to come to defend myself.

‘I strongly believe you have to stand for something or you fall for anything.’

Before the case began Justice Lucy McCallum excused two potential jurors due to a potential for perceived bias.

‘They were not only cricket fans but fans of Mr Gayle,’ she said. 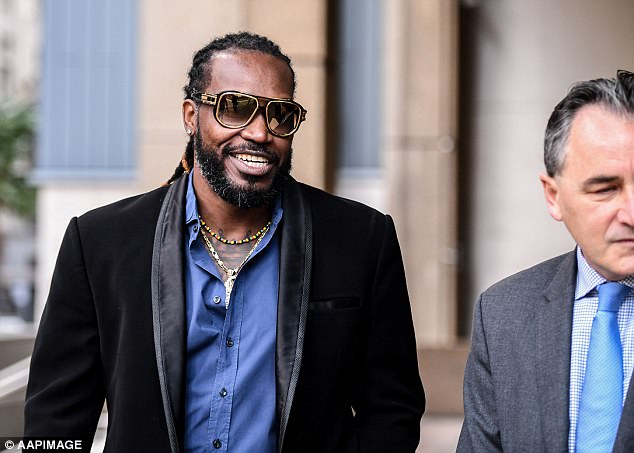