Chris Hemsworth and Matt Damon hit the beach with their families

They’re the A-list actors who have become fast friends.

And Chris Hemsworth and Matt Damon took time out from their acting careers to join their families at the beach.

The heartthrobs appeared at ease as they doted on their brood at Queensland’s North Stradbroke Island.

Surf’s up! Chris Hemsworth, 34, showed off his ripped physique as he enjoyed a day at the beach, at Queensland’s North Stradbroke Island on Thursday

Sporting just a pair of black board shorts hung low on his hips, Chris revealed his defined pecs, arms and washboard stomach.

The 34-year-old Thor star opted to go barefoot, and accessorised with a black cap and gold-rimmed sunglasses.

Grabbing a palm-tree emblazoned tote bag from a black SUV, Chris was very much a doting father, carrying one of his twin sons on his hip. 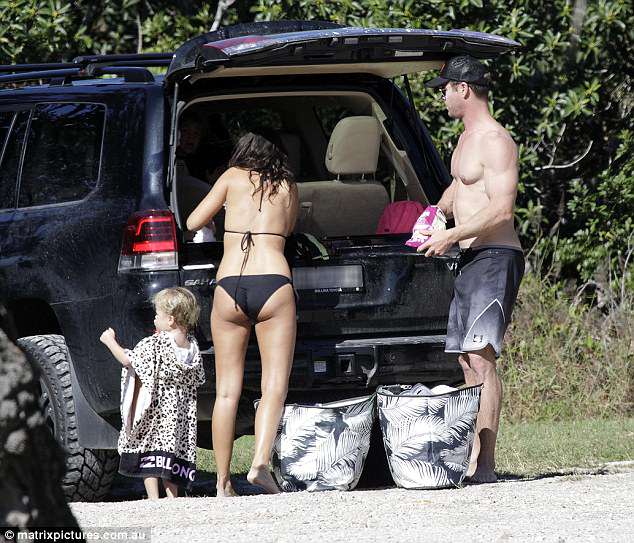 Buff: Sporting just a pair of black board shorts hung low on his hips, the actor showed off his defined pecs, arms and washboard stomach 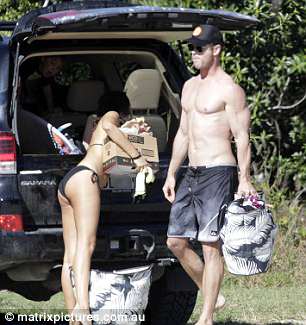 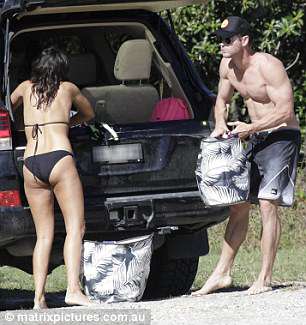 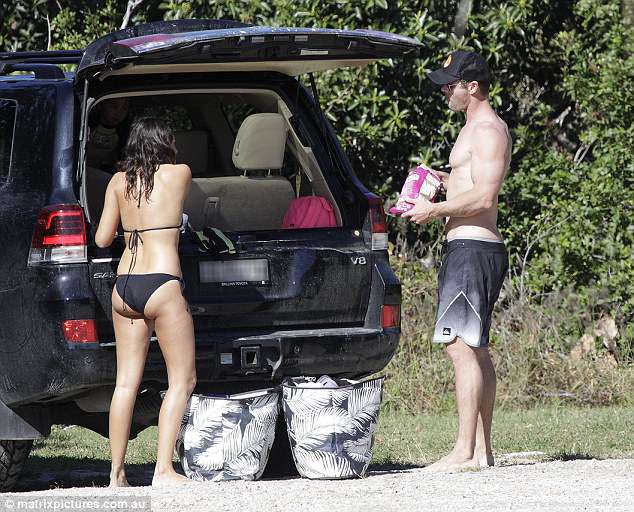 Working up an appetite: The father-of-three enjoyed a quick bite as he and a female friend collected items from the boot of the car

Matt was close by, carrying what appeared to be an esky down to the shore.

The 47-year-old cut a cool and casual figure in a navy slim-fit T-shirt, teamed with block panel board shorts and aviator sunglasses.

Matt and Chris joined their brood on the sand, including Matt’s wife, Luciana Barroso and their families. 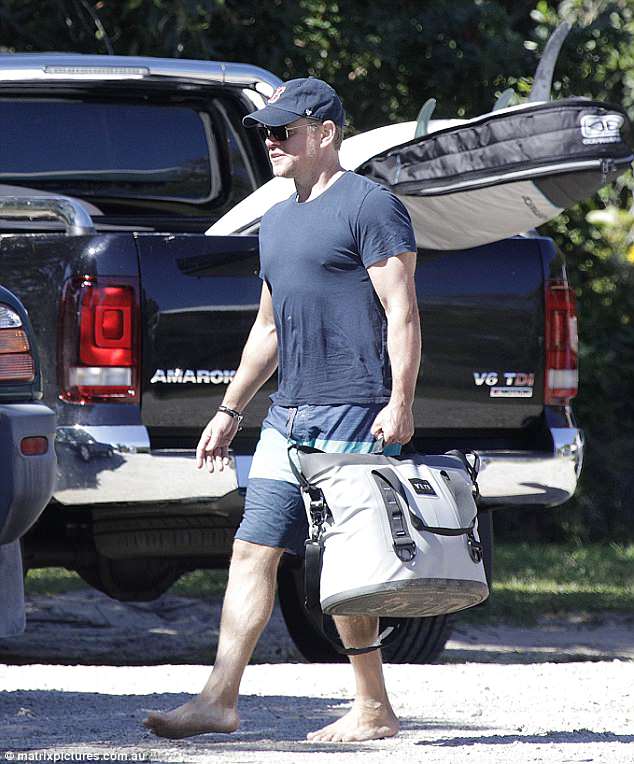 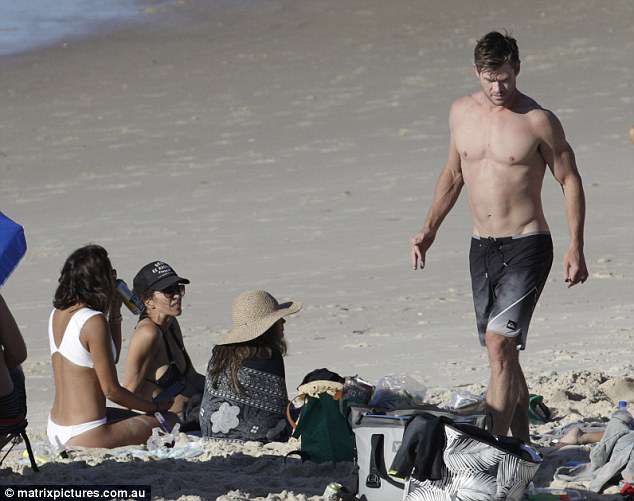 Group affair: Matt and Chris joined their families on the shore 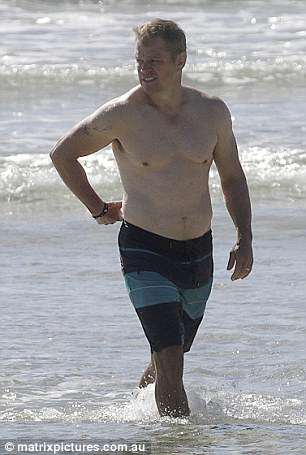 Making a splash: Matt enjoyed a quick dip in the ocean

Luciana, 42, stunned in a white two-piece bikini, and accessorised with a round-rimmed sun hat and designer sunglasses.

Appearing a picture of content, the brunette reclined on the sand, letting out a wide grin.

Matt went on to enjoy a dip in the ocean and perfect his surfing skills. 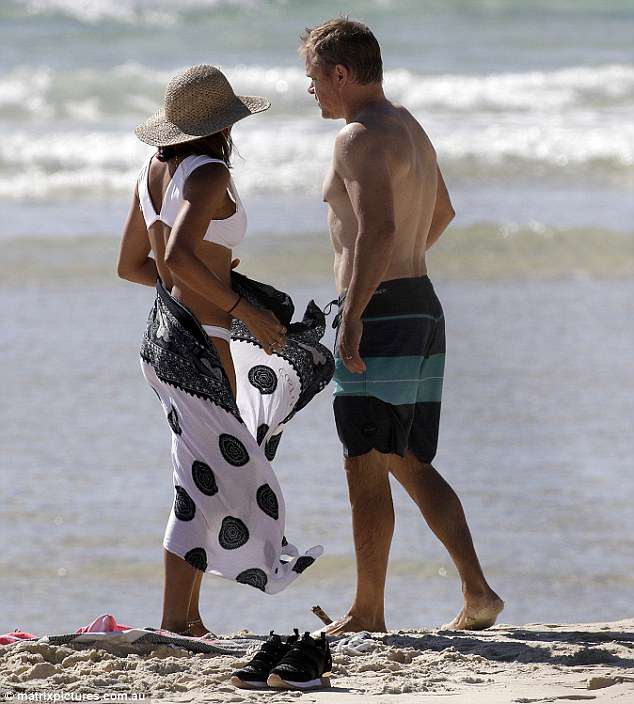 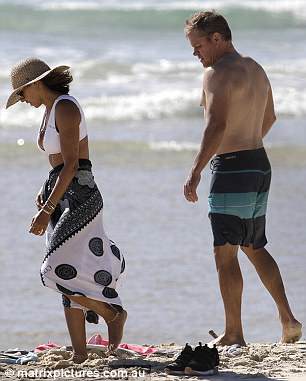 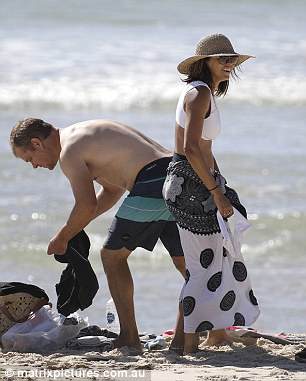 Looking good: The brunette looked every inch the beach babe, accessorising with a polka dot sarong and designer sunglasses 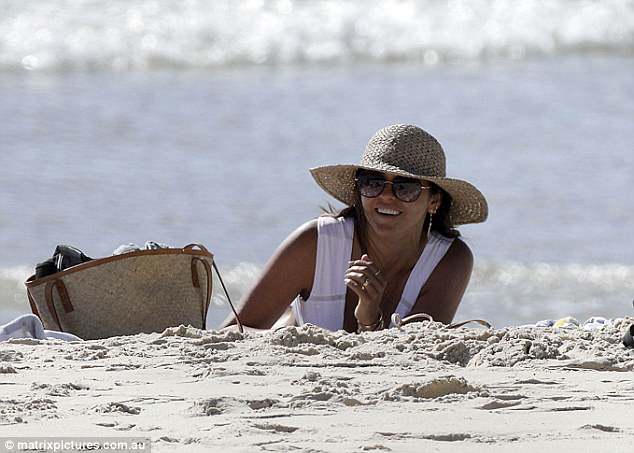 Content: Luciana let out a wide grin as she reclined on the sand

Noticeably absent on the outing was Chris’ wife Elsa Pataky, 41.

The Fast and the Furious actress is currently filming Netflix’s Tidelands, just a few kilometres away from North Stradbroke Island. 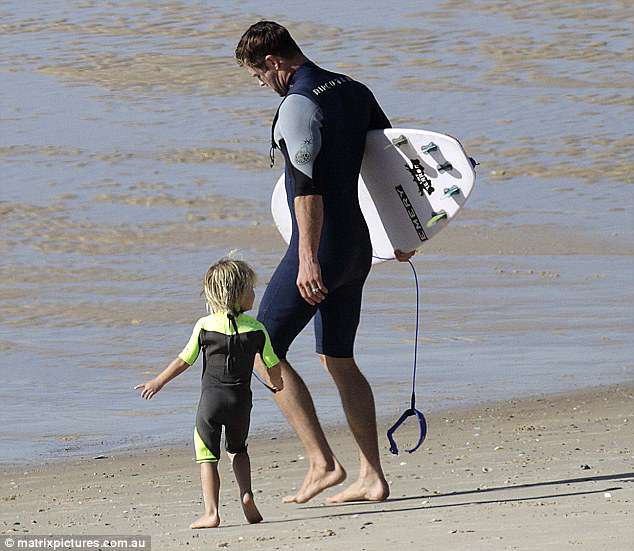 Father duties: Chris, who was later clad in a wet suit, bonded with one of his twin sons 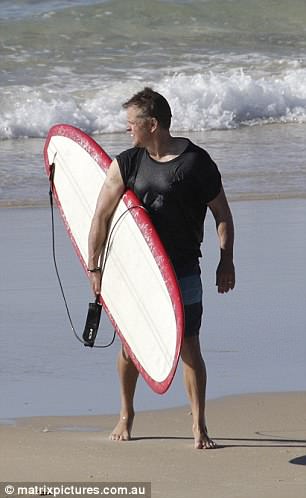 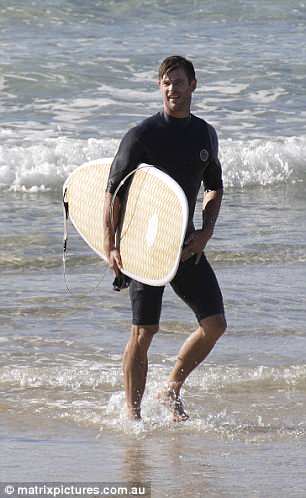 Perfecting their skills: Matt and Chris looked to have perfected their surfing skills 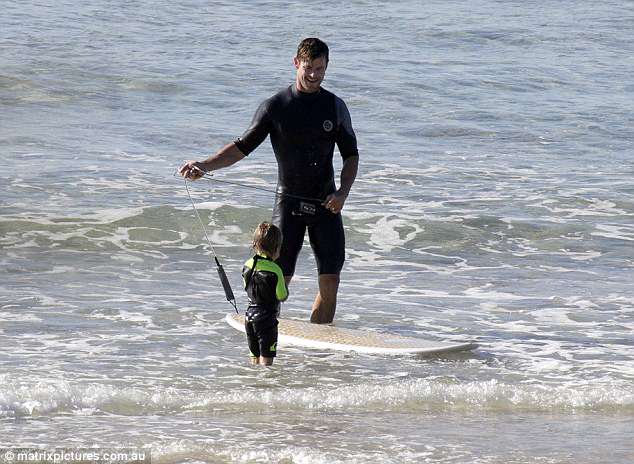 The look of love: Chris gazed adoringly at his young son 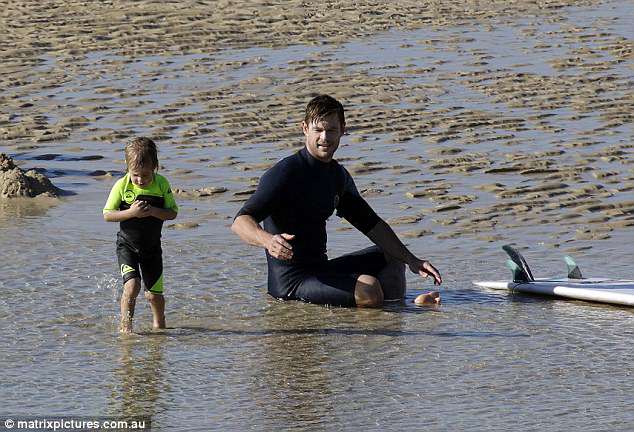 Having a moment: The Thor star looked to have shared a moment with his toddler son

This is not the first time Matt and his family has enjoyed time in the surf Down Under.

The Oscar-winner had been in Australia for several weeks with Luciana and their children Isabella, 11, Gia, nine, and Stella, seven, last month.

Matt, Luciana and their brood spent time with Chris and Elsa in Byron Bay, a coastal town in New South Wales. 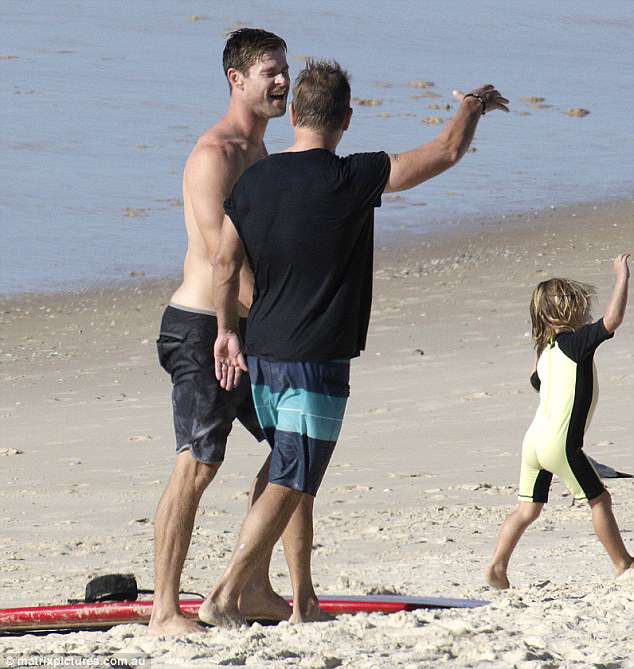 What’s so funny? The firm friends were pictured enjoying a laugh on the sand 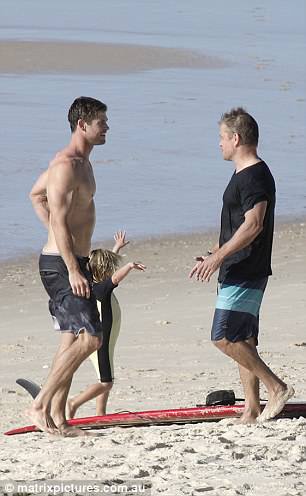 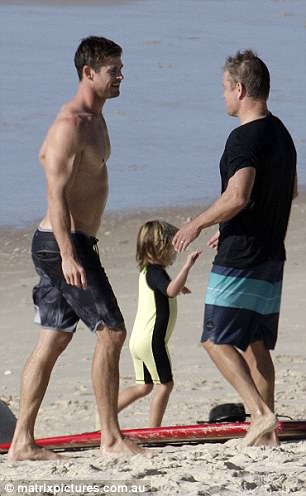 In conversation: Chris and Matt looked to enjoy a bit of banter 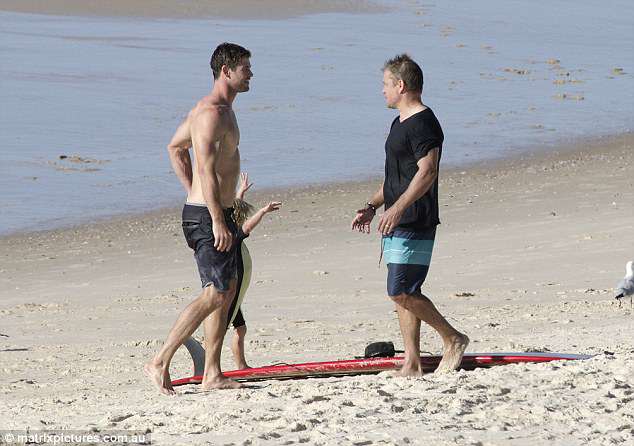 Close: Matt and Chris have fast become friends, often pictured together on the beach 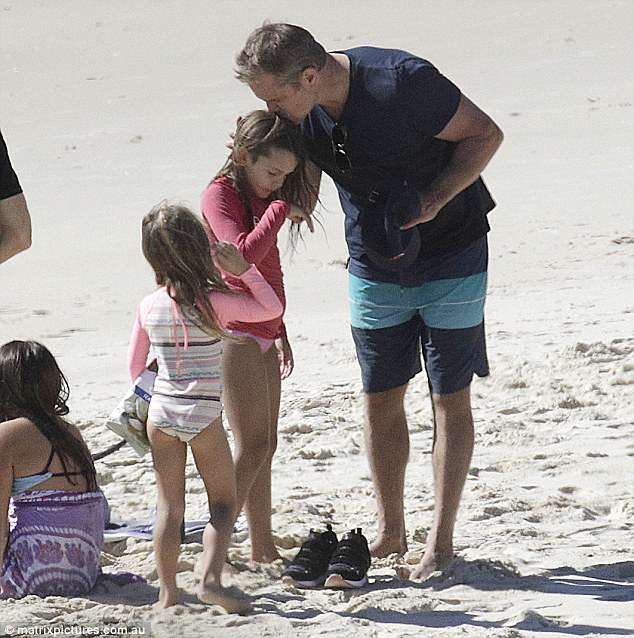 Affectionate: Matt planted a kiss on his daughter’s head

During their holiday, Matt and Luciana attended the laid back Byron Bay Bluesfest with the Hemsworths and their friends.

The sightings come after a source told Page Six that Matt was ‘telling friends and colleagues in Hollywood that he’s moving the family to Australia for a year.’

But despite whispers of a move Down Under, Matt has denied he is leaving the US.

‘Matt has visited Australia several times recently, but he has not bought a house there nor is he moving there,’ his representative said. 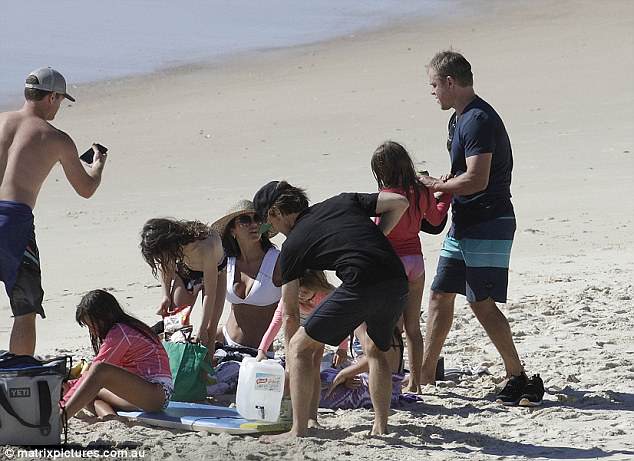 Clan: The group were equipped with essentials including food and water 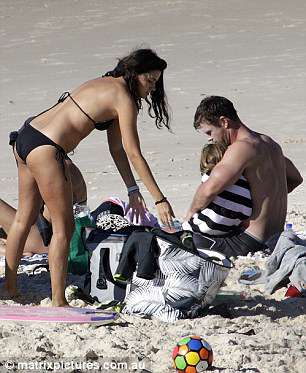 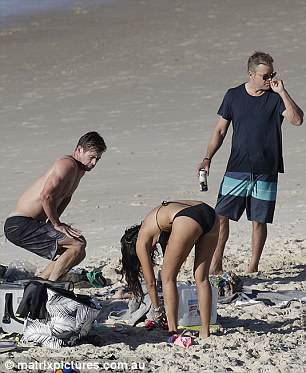 In action: The group appeared to be enjoying one another’s company 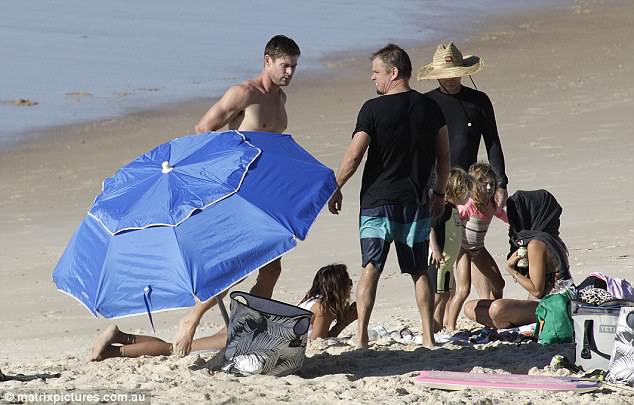 The future’s bright: The clan also brought along a large blue umbrella, to be sun-smart