Viewers have taken to Twitter to praise Love Island star Chris Hughes’s bravery for having a testicular examination live on This Morning on Wednesday.

The 25-year-old was keen to raise awareness of testicular cancer and other related issues and dropped his pants in order that Dr Chris Steele, 76, could show how an examination takes place.

Chris happily showed off a long scar on his own testicle as he spoke about his own shock health scare and telling Phillip Schofield, 56, and Rochelle Humes, 29, about what his male relatives went through.

Raising awareness: Love Island’s Chris Hughes was praised by fans for having a testicular examination LIVE on This Morning on Wednesday… following his own shock health scare (MailOnline has pixellated) 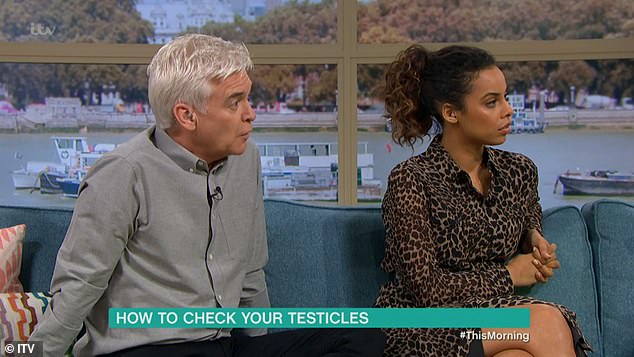 Personal woes: Chris told Phillip Schofield and Rochelle Humes that his male relatives have also had issues with their manhood, including cancer and infertility

He said: ‘I was diagnosed with two separate conditions, I had operations but there was no long term damage.

‘I was around 14, I used to have a lot of baths. I just noticed one day what looked like a brain, it was build-up of veins [coming from his kidney]. It was a varicose seal.’

Chris previously said that he waited until he was 20 to see a doctor because he felt embarrassed, but he has since realised he needn’t have been. 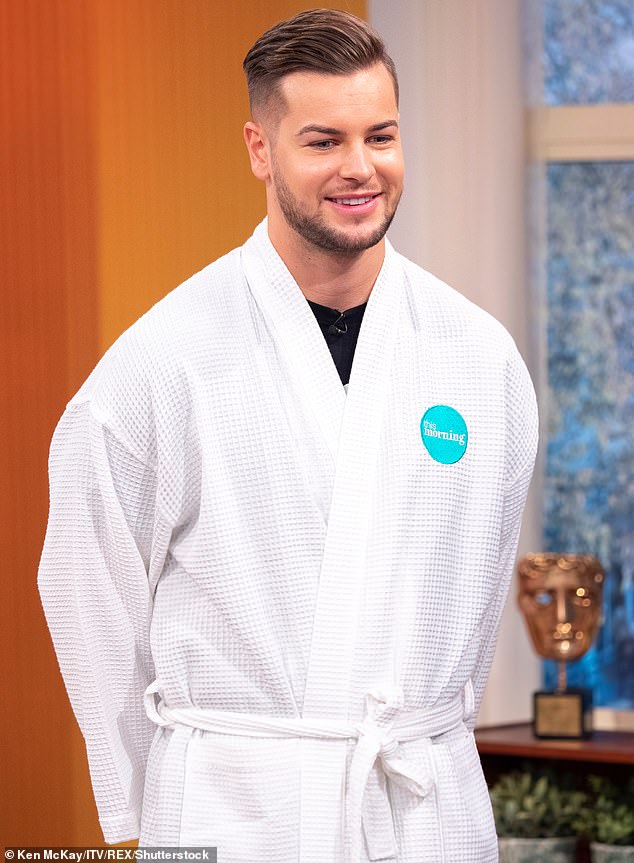 No need to be shy: Chris revealed he had his own sperm frozen after having operations on the varicose seal on his left testicle – he noticed at it 14 but didn’t get it checked until he was 20 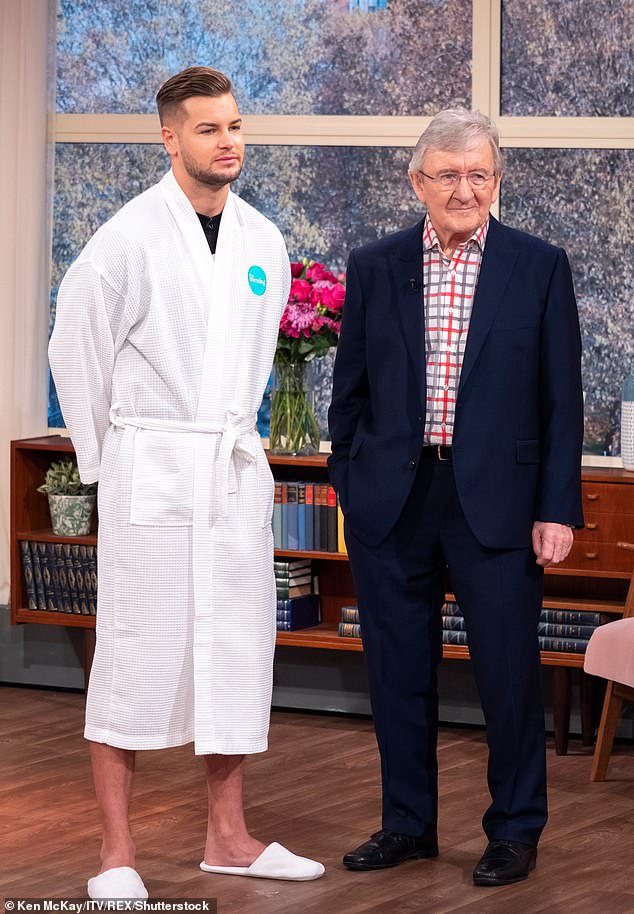 He added: ‘My two brothers are completely infertile but one managed to have a miracle baby. My one brother Will has not one sperm in his body’

He had keyhole surgery and had the fluid drained.

Chris also said on Wednesday: ‘I got referred to Bristol hospital.

‘I had three operations on the varicose seal on my left testicle it had surrounded my whole left side.’ 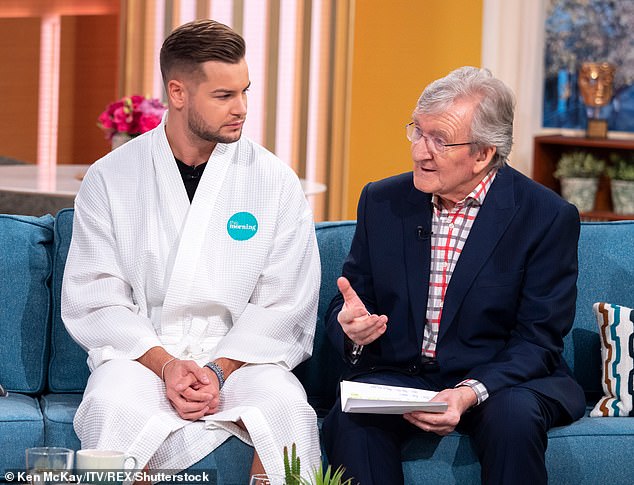 Chris also told Dr Steele: ‘My cousin had testicular cancer. It was only when he got major stomach cramps where the cancer had eaten into it, he was diagnosed’

During the early stages, testicular cancer typically presents as a hard lump or swelling in a testis.

The lump is usually painless and can vary considerably in size but is typically the size of a pea and located on the front or side of the testicle.

Not all individuals with testicular cancer will present with a lump in their testicles.

Symptoms can be subtle and therefore easily missed which is why it is so important to familiarise yourself with how your testicles feel when they are healthy.

However the good news is testicular cancer is very treatable, with around a 95 per cent cure rate.

Cancer Research UK figures show there are around 2,400 men are diagnosed with testicular cancer each year across the home nations.

And Chris said that his family members have also had some health woes in that department.

He said: ‘I have a big scar across the pubic region. I froze my sperm.

‘My two brothers are completely infertile but one managed to have a miracle baby. My one brother Will has not one sperm in his body.

‘My sperm count was quite low, I have had a hydro seal. I have had four operations on them.’

Chris continued: ‘My cousin had testicular cancer. It was only when he got major stomach cramps where the cancer had eaten into it, he was diagnosed.’

Twitter went wild and once they had got over the shock of the nakedness of Chris’s appearance on daytime TV, they praised his actions.

They wrote: ‘Fair play @chrishughes_22 that takes a lot of balls to do that and raise awareness. #thismorning #punintended.’

‘So much respect for @chrishughes_22 telling his story and doing a live examination on @thismorning #Movember2018.’

‘@chrishughes_22 brave move on #thismorning today Chris. Well done you. Show these chaps there’s nothing to fear or feel embarrassed by.’

‘Massive respect for Chris Hughes getting his bits checked on this morning to help men know what they are looking for. Potentially saving lives.’

‘@chrishughes_22 Well Done for raising awareness today on #thismorning Even if you inspire one more guy to be brave enough to get checked out, you’ve done a great job.’

Phillip praised Chris for his bravery and Rochelle asked him why he thinks more men don’t get properly checked.

Supportive: Twitter was awash with comments about how brave Chris had been to strip off in order to raise awareness about health issues 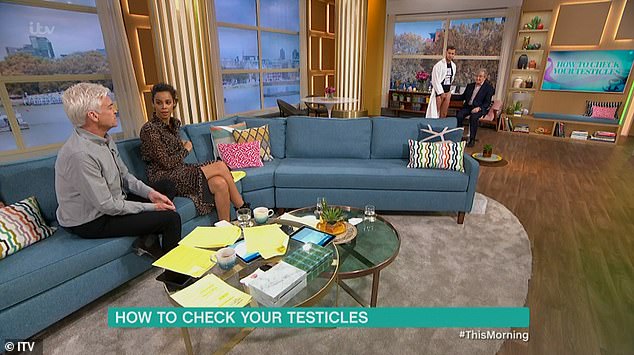 He has done well: Phillip praised Chris for his bravery and asked him why he thinks more men don’t get properly checked as it’s so important

Chris responded: ‘Everyone thinks they know their body and it’s so easier to brush over that fact.

‘You wash yourself but you don’t use your fingertips in the right way.

He said: ‘Yes, there’s a website you don’t need to go to a GP you can go to movember.com and there’s plenty of information there.

‘It’s a shame people are so shy, doctors have seen everything.’

HOW TO EXAMINE YOUR TESTICLES…

Dr Steele explained how to examine the testicles to check for cancer, showing men should put their fingers behind the testicle with their thumb on the front.

Using the pads of the fingers and thumb instead of the tips, the thumb should be gently rolled from the top to the bottom of the testicle on the front and side, then back up.

This should be done on both sides and the testicles should feel smooth and firm.

But if a lump can be felt – possibly the size of a pea and firm – that is something a doctor needs to take a look at.

Dr Steele said the simple, 10-second exam is easy to do and is typically how testicular cancer is detected. 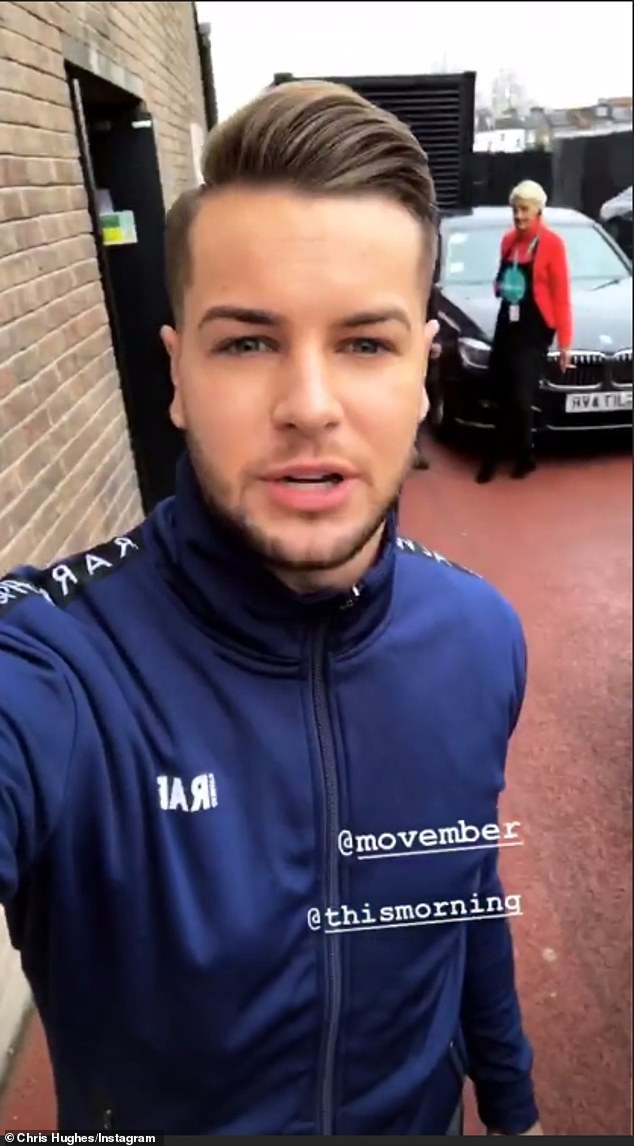 Doing good: Chris shared a clip on Instagram stories after the show urging men to check their testicles