Chris Kamara has claimed he could have avoiding the slurring speech condition that forced him to quit his job if he ‘wasn’t a dinosaur’ and got checked sooner.

The former Sky Sports pundit revealed he was suffering with the rare neurological disorder apraxia of speech (AOS) in March.

The condition makes it difficult to pronounce words correctly, and led to the 64-year-old leaving his role earlier this year.

Despite suffering symptoms for over a year, the former Swindon Town and Brentford midfielder kept his fears from his family. 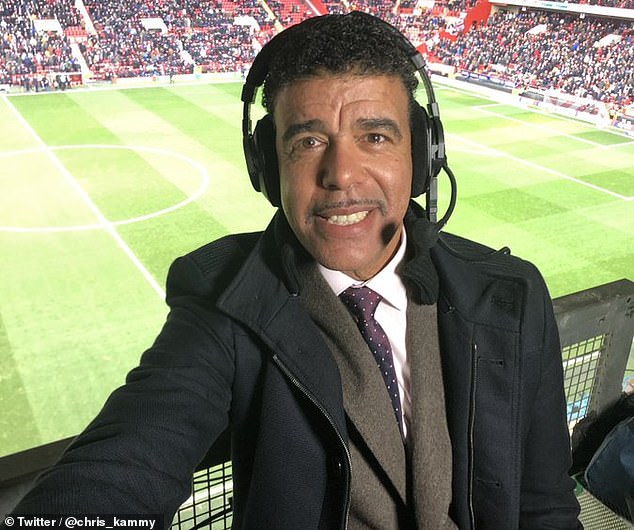 And doctors told him he could have kept his speech if he had got checked sooner, leaving him steeped with regret.

Mr Kamara told The Sun: ‘The doctor said if I’d gone in those first two or three months and had my thyroid checked then I might have been okay.

‘But because I left it, everything happening in the body — the balance, the muscle weakening — came from the fact I didn’t tell anybody.

‘I feel I’ve let my wife and family down by being a dinosaur and not getting checked out.’

He first became aware of symptoms at the start of lockdown in March 2020 but initially ignored them.

Mr Kamara admitted he ‘stupidly’ hid his fears from his wife Anne and two sons Ben 35, and Jack, 34.

Rather than trying to speak normally, he would keep conversations with his family short and never start them.

But his wife of 40 years grew concerned after seeing his performance on the One Show in December 2020 and insisted he went to a doctor.

His GP referred him for a brain scan, which checked for dementia, after he said he was suffering ‘brain fog’ that he feared was caused by heading the ball as a player.

The scan came back negative but a blood test revealed he had a thyroid issue and he was given drugs to combat the problem.

Despite his thyroid stabilising, the speech issues continued and a specialist later diagnosed him with apraxia.

The Middlesbrough-born presenter quit Sky due to the demands of live broadcasting but has continued working for ITV on a number of pre-recorded television shows.

Kamara fought to overcome his speech issues and returned to screens to co-host The Games and Ninja Warrior UK earlier this year.

Fans originally became concerned for the pundit when they noticed he was slurring some of his words when reporting live from matches.

Kamara eventually revealed that he had been dealing with the issue for two years in March.

He admitted to finding it difficult to watch himself on TV and is wondering whether or not he should continue.