Chris Long is one of the many players from the Super Bowl LI winning New England Patriots who is returning for the big game this year.

There is one big difference however, with Long now playing for the Philadelphia Eagles in the NFC, and looking to take down his former teammates on Sunday night in Minnesota.

One thing has not changed for Long though, who revealed for the second straight year that he will not visit with President Donald Trump at the White House if he and the Eagles soar to victory.

Long previously made headlines this season by declaring he was donating his entire salary to charity.

Declined: Chris Long said that he would not attend the White House reception if the Philadelphia Eagles win the Super Bowl on Sunday (long with his dad Howie and son Waylon) 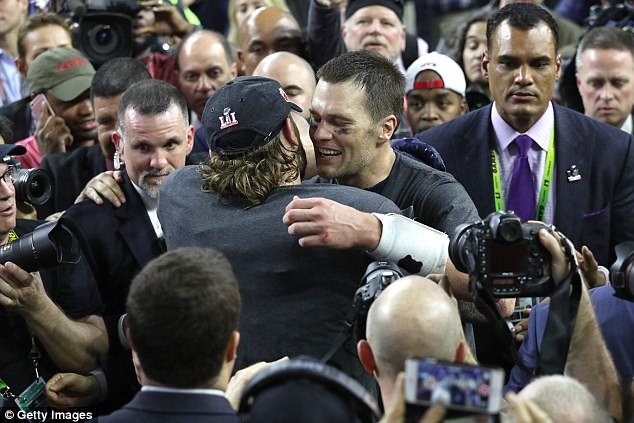 Memories: It was his second year in a row sharing this, with the defensive lineman skipping the ceremony in 2017 after her won with the New England Patriots (Long and Tom Brady hug after Super Bowl LI in 2017) 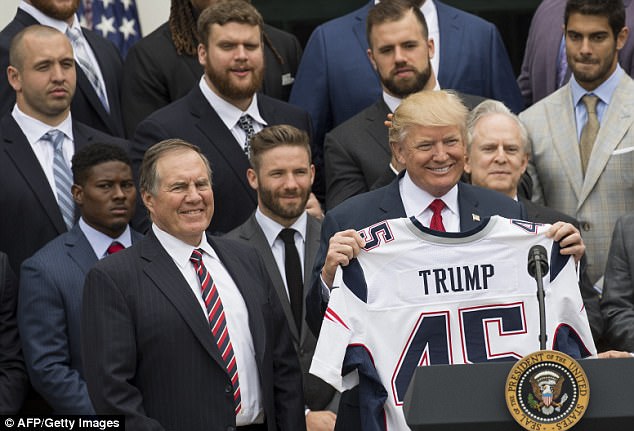 Deouble decline: ‘No, I’m not going to the White House. Are you kidding me?’ Long told Barstool Sports while being interview on Pardon My Take (Trump and Belichick in 2017)

The 32-year-old defensive lineman was interviewed by Barstool Sports’ Pardon My Take on Sunday, and asked if there was a possibility he might make the trip to 1600 Pennsylvania Avenue this year.

‘No, I’m not going to the White House. Are you kidding me?’ said Long.

It was not a surprising response, but one that got a lot of pickup in light of the few Super Ball players who have spoken to the media over the past week.

Long, who in addition to owning a Super Bowl ring also has one of the wittiest social media presences of any professional American athlete, responded to the mass interest on Twitter.

‘Slow news week huh,’ wrote Long, whose Twitter avatar is currently an image of Tommy Wisseau throwing a football from the film The Room.

‘”Guy that didn’t go to White House last year answers direct question as to whether or not he’d hypothetically go this year.” what a shocker!! thank you to the hack jobs for making it sound like I held a press conference..

He then added: “Also credit @PardonMyTake.’

The defensive lineman could be the secret weapon who manages to shut down his former friends Tom Brady, Rob Gronkowski and Danny Amendola this Sunday in Minnesota.

Long, who is  the son of Fox Sports host and Hall of Famer Howie Long, capped off his first season with the Patriots with a Super Bowl win last year.

He then announced he would not be attending the White House bash on Twitter, in response to an open letter from Chuck Modiano of the New York Daily News. 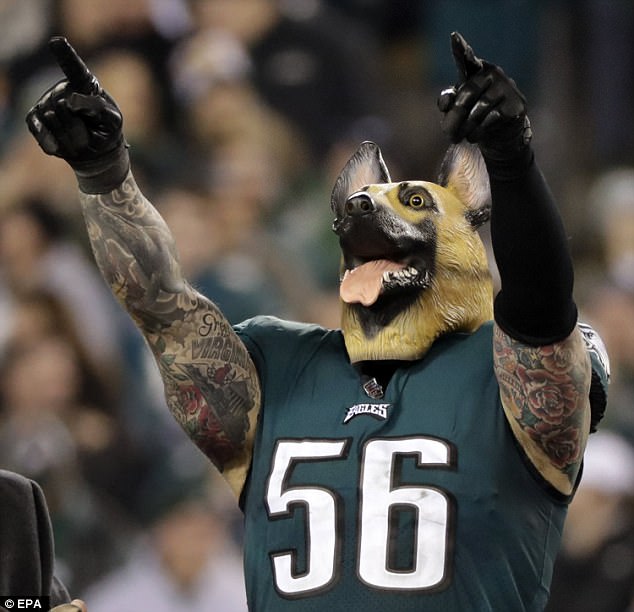 Joker: ‘”Guy that didn’t go to White House last year answers direct question as to whether or not he’d hypothetically go this year,”‘ joked Long on Monday (Long above last Sunday) 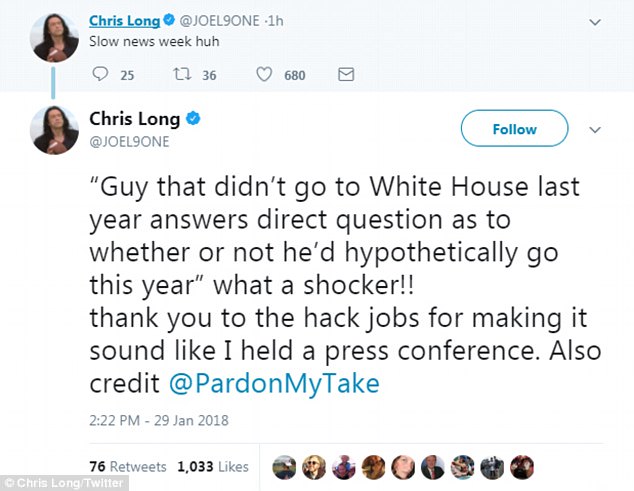 Role model: Long, 32, has donated his entire salary this season to charity while also managing to raise an addditional $1.3 million

‘Oh Chuck. Planned on skipping, hadn’t been asked. Don’t need an open letter explaining my own words to me. Not *joining* anyone. My call,’ wrote Long.

That visit ended up being a bit underwhelming, with Brady also skipping to attend to personal family matters.

Then, just hours before the visit, the team learned that former cornerback Aaron Hernandez was dead at the age of 27 after being found hanged in his prison cell,.

Long declared a few months later that he would be giving away his salary each week to a different charity.

‘I hope it won’t stop here, but that more people will become inspired to commit energy and resources to our educational system,’ explained Long.

‘It will be the number of people invested in this cause that will be the difference maker for a quality education for every student in America. Education is the best gateway to a better tomorrow for EVERYONE in America.’

He managed to raise $1.3 million in donations during the season as well thanks to his charitable example.