Television star Chris Packham believes he knows the identities of those behind a series of threats against him and says he is working with police to catch them.

The BBC Springwatch presenter – an avid environmentalist and animal rights campaigner – was targeted on Friday night by balaclava-clad thugs who torched a Land Rover outside his home.

He said investigations are ongoing into the alarming incident, which took place outside the gates of his remote New Forest house as he slept.

The 60-year-old naturalist said the blaze was the latest in a series of ‘intimidation’ tactics deployed against him – having already received written death threats and had dead animals pinned up to his gate.

He described the latest incident as an ‘escalation’ and said he has been working with police to identify those responsible. But he revealed he already had a ‘good idea’ of those behind the threats.

Speaking to the BBC today, he said: ‘We see this as an escalation of threats against us that have been ongoing for at least two to three years. 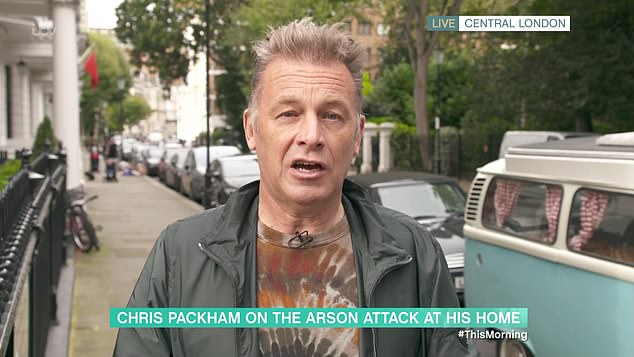 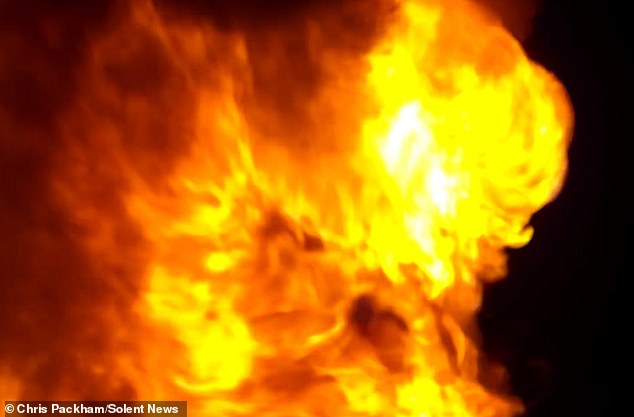 ‘In previous incidents they have been tying dead animals against the gate. Only recently I found yet another animal outside the gates.

‘Again, I’ve worked very closely with the police and they’ve given excellent guidance on how to deal with these things and we’ve been compliant.

‘But as you can imagine, gathering evidence to find out who the perpetrators are is very difficult and they’ve done their very best, but up until this point we’ve not been unable to pursue these individuals, although we have quite a good idea about who some of them might be.’

Mr Packham, who was alone in the house at the time, also took a swing at ‘internet trolls’ – who he accused of fueling the attacks against him.

‘I think that it stokes up two sets of people, one who are relatively local to me and we know that certain local individuals have been spoken to by police for things they have done.

‘And then there are other organisations, outside organisations, who again fuel this sort of hatred. And collectively it just builds up an aura where people feel compelled to act.

‘I’d much rather we engaged in some sort of creative discourse, rather than them burning parts of my property down.’

However Mr Packham remained defiant and promised to continue his campaigning, adding: ‘I suppose they perceive this to be an intimidating gesture which they think will frighten me into backing off, but I’m not easily intimidated by such gestures. So as a result I will stay true to my cause.’

Mr Packham had earlier revealed how the balaclava-clad thugs had driven the Land Rover to his remote country home and set fire to it, before fleeing in a get-away vehicle.

He said the car was engulfed in an inferno before exploding shortly after. In a video, the presenter raised the prospect of his opponents one day killing him.

He said: ‘Are they going to kill me at some point? I think it’s a fair question.’

He added: ‘I will not be cowed, I will not buckle. I cannot and will not let your intimidation sway me from my course.’ 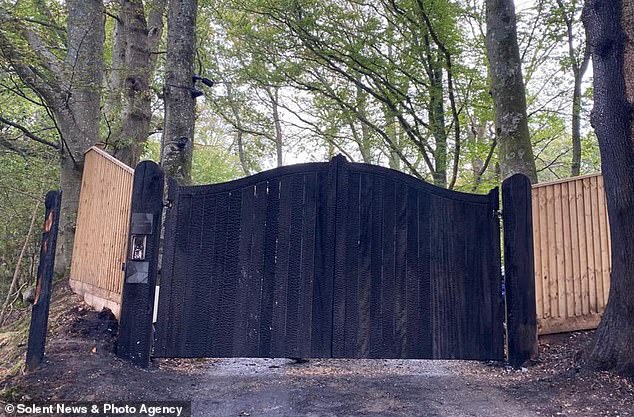 Television star Chris Packham has claimed that a Land Rover was blown up by hate campaigners outside his home’s front gate. Pictured: The charred gate after the fire

Describing the incident, he said: ‘So on Thursday night/Friday morning, 12.30am, two hoodied and masked men dove a vehicle right up to my gate and set it on fire.

‘They were fully aware of the CCTV that was in place they took great pains to hide themselves. The car exploded and was rapidly and efficiently dealt with by HFR and the police were in attendance.

‘As ever they did a fantastic job but not before it had caused extensive damage to my property.’

Speaking to the Daily Mirror, the anti-hunting campaigner said that he had gone to bed and was ‘crashed out’ when the incident happened.

‘The gate isn’t visible from the bedroom but of course when it exploded, it went off with a massive bang which woke me and the dogs up,’ he told the newspaper.

‘It was an inferno. The neighbours called the fire brigade and they turned up and put it out. The police turned up a bit later.’

The explosion, caught on CCTV, set fire to Mr Packham’s gate and fence of his property.

The attack came hours after Mr Packham marched to Buckingham Palace to call on the Royal Family to re-wild their estates.

Packham – who in the past has had dead animals strung up at the gates of his home – speculated about who might be responsible.

‘This leaves me with some questions,’ he said. ‘Firstly who were these two men? Were they members of the RSPB? The Wildlife Trust? Butterfly Conservation? Bat Conservation Trust?

‘Were they members of the Countryside Alliance? The British Association for Shooting and Conservation? Members of the hunt, perhaps?

‘Or were they some of my internet trolls who fill my timeline with hate? Defamatory comments, libellous comments, but lots of hate calculated to damage myself and my interest. I don’t know.’ 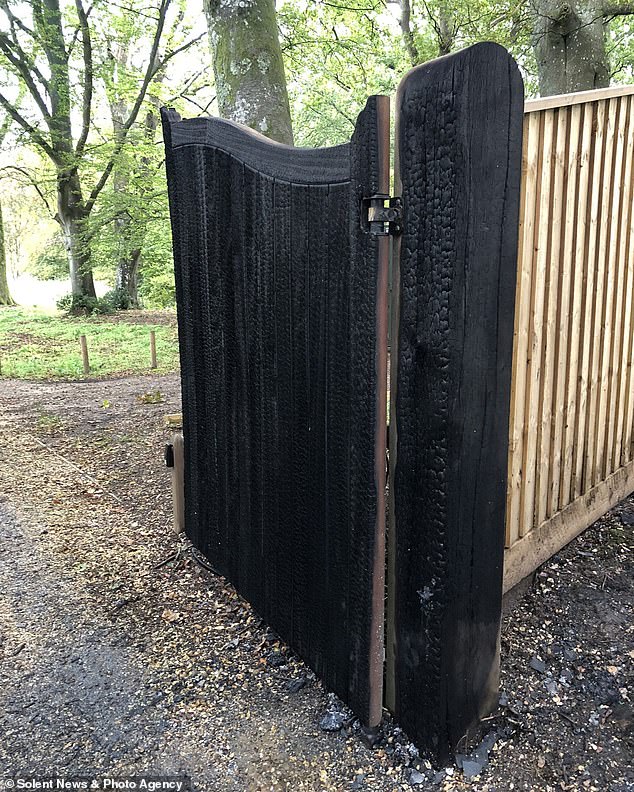 The presenter of BBC’s Springwatch said that at around midnight of Friday, balaclava-clad thugs drove his car to his remote country home and set fire to it, before fleeing in a get-away vehicle 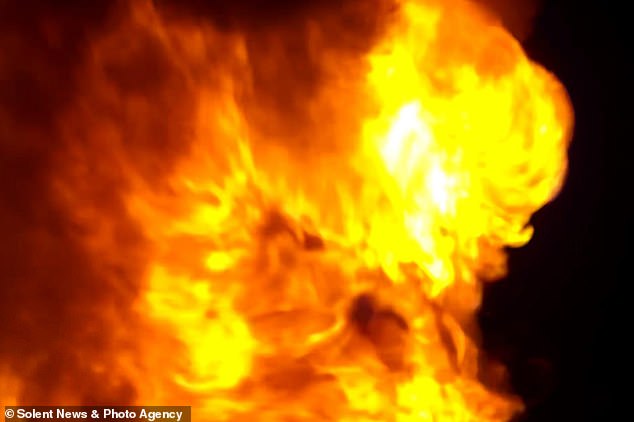 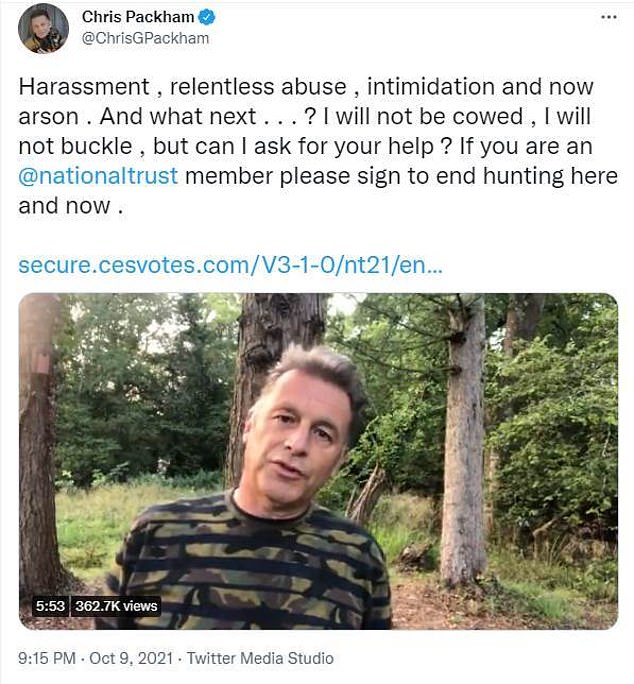 Packham said he was frustrated at the lack of action taken against his trolls, compared to England footballers when they were abused online following the Euro 2020 final.

‘I wonder about the internet trolls because they get away with it,’ he said. ‘Despite working effectively with the police, the law as it stands means I am unable to take any action against this form of harassment.

‘But it is hate crime. There’s no ambiguity about that. It’s a little unfair that when black footballers receive unwarranted and appalling hate crime the issue can be dealt with and that’s great of course and I support that fully.

‘But when environmentalists like myself receive similarly hateful torrents of relentless abuse nothing can be done about it. Because ultimately it comes at a cost.

‘Perhaps the cost was having my gate burnt down causing thousands of pounds worth of damage. And of course it’s not the first action that we have seen here. Dead animals are a frequent occurrence.

‘But now it’s escalated because they’ve taken to damaging that property and I wonder where it’s going. I mean what happens next? Do they going to burn the house down, are they going to beat up my step-daughter? Are they going to cut the brake lines on my partner’s car?’

Packham concluded: ‘All I can say is whoever you are – you burned down the wrong gates.

‘Because if you think…that I’m suddenly going to become a supporter of unsustainable or illegal shooting, or the unwarranted savagery wrought upon foxes in our countryside, then you’re wrong.’

Packham finished by calling on his supporters to vote in favour of an upcoming National Trust motion to to ban trail hunting on their properties and urged them to write to other significant landowners to do the same.

He has been targeted before. In 2019, he received death threats after he launched a legal challenge in an attempt to stop people shooting so-called pest birds like pigeons and crows. 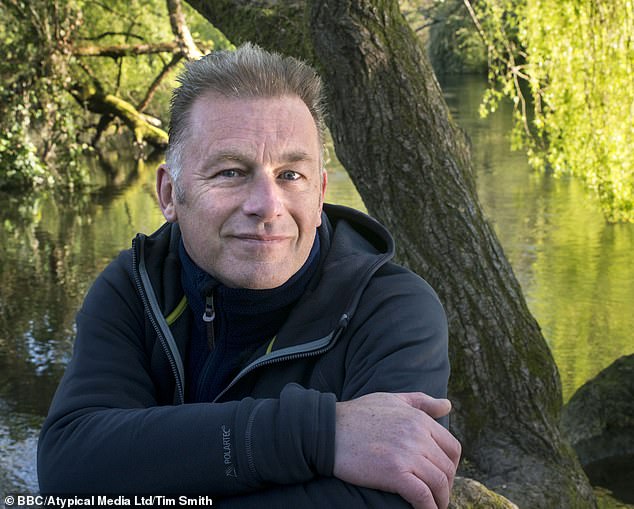 Speaking to the Daily Mirror, the anti-hunting Mr Packham campaigner said that he had gone to bed and was ‘crashed out’ when the incident happening.

The presenter has also been sent packages of human excrement, had barbed wire left on his drive to puncture his tyres, and found dead crows hung from his gate.

Two years ago, a group that the Mr Packham is a part of – Wild Justice Group – helped to force through a change in the law to do with the shooting of 16 bird species.

Hunters and farmers were infuriated by the move, who said they were now unable to cull crows attacking newborn lambs or stop pigeons stealing their crops – unless the applied for individual licenses.

The Government later introduced three other licences that are almost identical to the one that was banned, but they don’t apply in some protection zones.

The TV star told The Mirror that he has stopped telling his partner and step daughter about more of the recent hate incidents against him, calling it the ‘same-old, same-old’.

He said recently someone threw a dead badger next to his gate, and that he feared that if the group with the 4X4 had a truck, they would have rammed down his gate and set fire to the vehicle next to his house.

‘It’s all about intimidation,’ he told the newspaper, adding that he is now worried about the family’s dogs, as well as their friends and family.

Hampshire Police have appealed for help in catching those responsible for the fire.

‘It was reported that a vehicle was on fire outside a property, which had subsequently spread to a surrounding gate and fence. Hampshire Fire and Rescue Service attended and extinguished the blaze,’ a spokesman said.

‘No arrests have been made. Were you in the area at the time? Did you see what happened? Or perhaps you have dash-cam footage or doorbell footage leading up to the incident.’

The eco campaigner was joined by around 100 ‘school strikers’ in a procession across Green Park to the palace with a petition boasting 100,000 signatures in hand.

The petition is aimed at urging the Royal Family to commit to rewilding its estates before the Cop26 climate summit in October.

The royals are the UK’s biggest landowners, with an estate that includes lands owned by the duchies of Lancaster and Cornwall and the Queen. 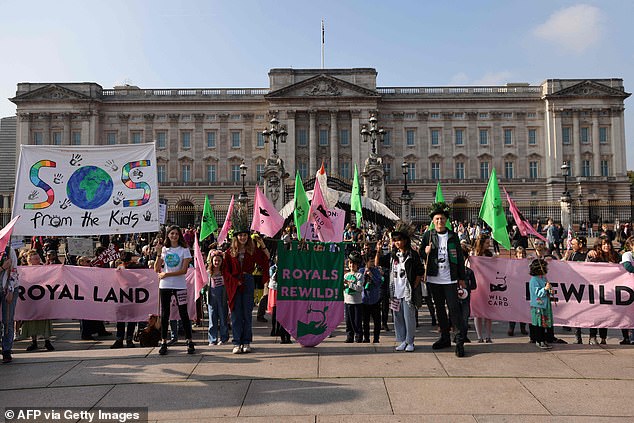 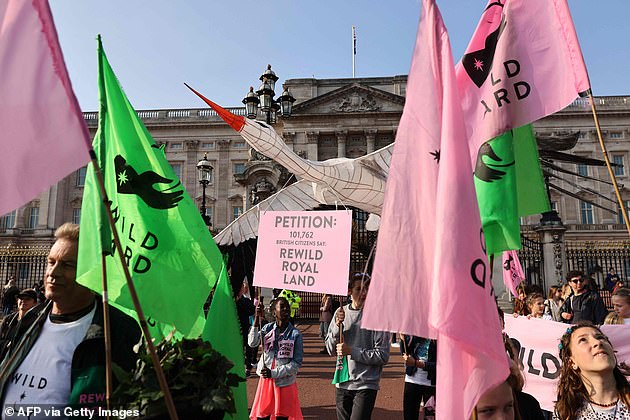 The petition gathered over 100,000 signatures 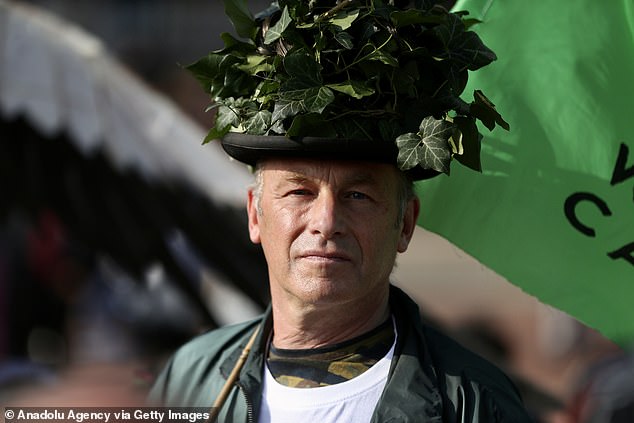 Speaking outside the palace on Saturday, Packham said: ‘Frankly, my conscience is not clear.’ 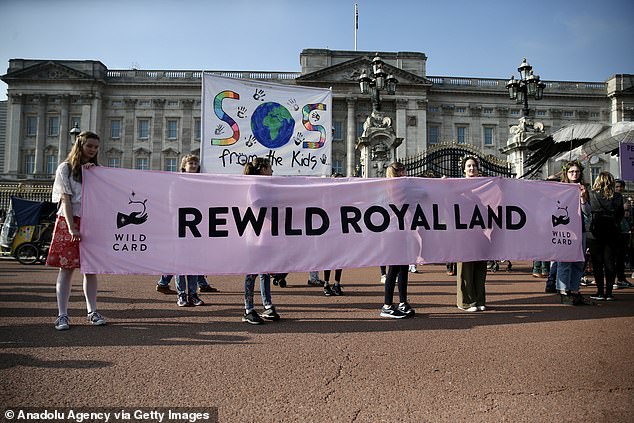 ‘We’re asking our royal Family, denizens of the property behind us, to rewild the 800,000 acres of land that they have in the UK,’ Chris Packham said.

It’s estimated that the family owns land equivalent to 1.4 per cent of the UK.

Speaking outside the palace on Saturday, Packham said: ‘Frankly, my conscience is not clear.

‘On my watch as an environmentalist and conservationist, I have failed these young people – I have failed to act quickly and broadly enough to prevent the crisis that we find ourselves in.

‘The world that they are likely to inherit – unless we act urgently, properly and quickly now – will not be as pleasant as the one I inherited when I was their age. And that’s not something I want to take to my grave.

‘It’s the most harmonious, beautiful and peaceful demonstration I have been on for some time.

‘We’re asking our royal Family, denizens of the property behind us, to rewild the 800,000 acres of land that they have in the UK. If they were to do so it would be a very powerful message that would resonate with people all over the world.’

Among those who marched was 16-year-old Noah Macaulay, a sixth-form student from Hampshire and co-founder of choir SOS from the Kids.

The group, who have performed on Britain’s Got Talent, write and sing songs as a form of environmental activism, and are set to perform at Cop26.

‘The royal family has an amazing opportunity, because they own so much land, to lead by example and rewild that,’ the teen said. 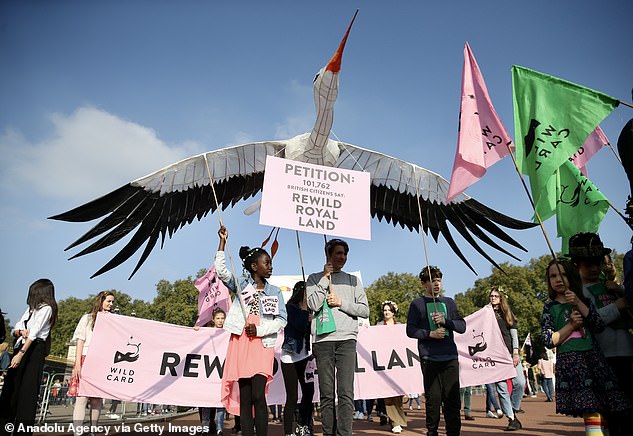 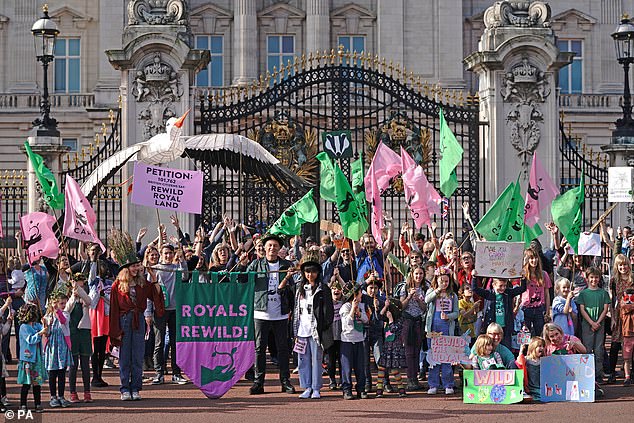 More than 100 children joined Chris Packham to deliver the petition

‘They could really, really help to improve nature and help biodiversity.’

A Royal Estates spokesperson said: ‘Members of the royal family have a longstanding commitment to conservation and biodiversity, and for over 50 years have championed the preservation and development of natural ecosystems.

‘The Royal Estates are constantly evolving and looking for new ways to continue improving biodiversity, conservation and public access to green spaces, as well as being home to thriving communities and businesses which form part of the fabric of the local community.’