TV wildlife expert Chris Packham has waded into the row over grouse shooting by tweeting a photo of a Golden Eagle flying with a trap on its leg.

The BBC Springwatch host posted the shocking image online with a link to a petition calling for a ban on the practice just days after the so-called ‘Glorious Twelfth’, the start of the four month long season.

Police are now investigating and appealing for help in locating the eagle that was spotted flying near the Queen’s Balmoral estate.

Today Packham uploaded the image of the rare bird after it was spotted flying over the Crathie area of Deeside, Aberdeenshire on August 8, and linked to a petition, calling for a ban on grouse shooting.

Mr Packham tweeted celebrities including comedians Ricky Gervias, Frankie Boyle, Sue Perkins and Dragon’s Den star Deborah Meaden and wrote underneath the picture: ‘Look at this Golden Eagle crippled and dying with a trap dangling from its legs.

‘Please ask your followers to sign this petition to ban driven grouse shooting.’

This afternoon the petition, which was set up by Chris Packham’s Wild Justice’ group, including campaigner Mark Avery, had been signed by nearly 26,000 people.

It is unclear what the link is between the image of the bird with a trap on its legs and the practice of grouse shooting.

Mr Packham tweeted celebrities including comedians Ricky Gervias, Frankie Boyle, Sue Perkins and Dragon’s Den star Deborah Meaden and wrote underneath the picture: ‘Look at this Golden Eagle crippled and dying with a trap dangling from its legs

It comes as Labour is calling for a review of grouse shooting amid warnings it causes substantial environmental damage to important natural habitats.

The party has said consideration should also be given to ‘viable alternatives’ such as simulated shooting or wildlife tourism.

Adrian Blackmore, Director of Shooting at the Countryside Alliance, today accused Chris Packham of using his ‘celebratory’ status with the BBC to promote the petition.

He said: ‘He has yet to explain what the other more economically viable real and potential uses of the UK’s uplands actually are. 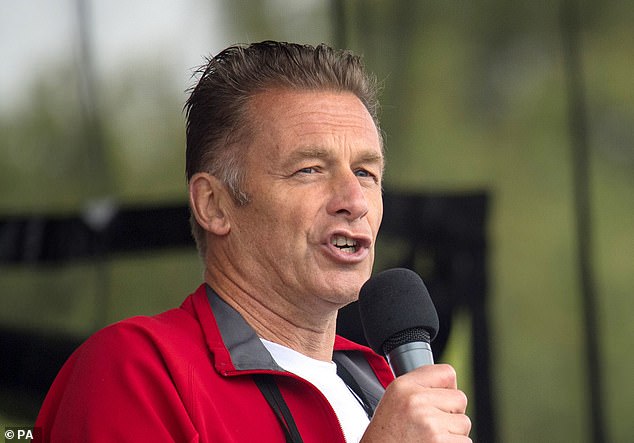 Speaking to Channel 4 News yesterday, Packham (pictured) said it was what he called ‘driven grouse shooting’ the sport of shooting red grouse, that he wants banned

‘The same goes for Labour’s Sue Hayman, Shadow Environment Secretary, who has also been criticised for making similar claims that are equally irresponsible.

‘Anyone who claims that there are viable alternatives to grouse shooting must have first undertaken a thorough assessment of not just the economic consequences, but also the environmental and social ones that would arise as a result.’

Speaking about the image tweeted by Packham, he said: ‘The Countryside Alliance condemns the illegal persecution of wildlife, all acts of which are inexcusable.

‘We understand that the incident has now been reported to Police Scotland for investigation.

‘We encourage anyone with any information that can help the police to do so.’

Speaking to Channel 4 News yesterday, Packham said it was what he called ‘driven grouse shooting’ the sport of shooting red grouse, that he wants banned.

He said: ‘It is enormously and environmentally destructive, and is also extremely destructive when it comes to our wildlife 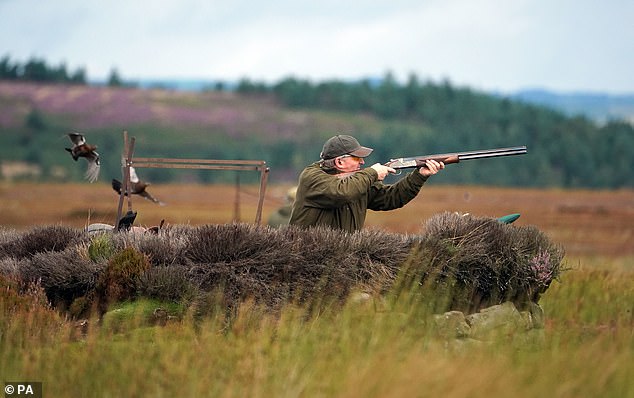 A member of a shooting party takes his aim on a moor near Ripon, North Yorkshire, as the Glorious Twelfth marks the start of the shooting season on Monday 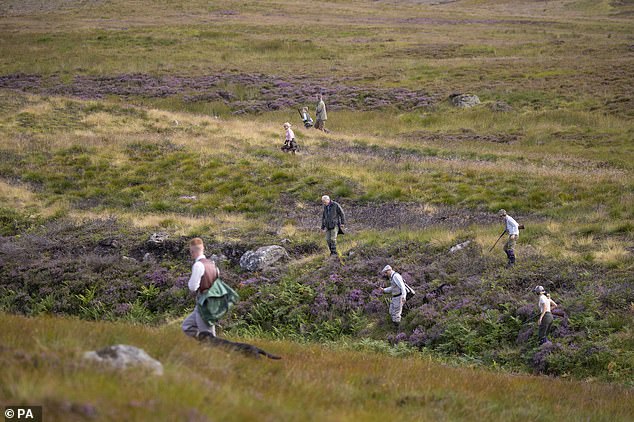 Members of a shooting party across the moorland. The team of shooters line out a numbered pegs while a group of beaters and their dogs move through the areas flushing the game ahead of them

‘Perhaps more disturbingly than the vast quantities of animals being killed, is the profound lack of fundamental, ecological knowledge in the fraternity of people who currently have custodianship over this part of our landscape.

‘We are looking at the widespread slaughter of millions of animals, legally and the continued persecution of other birds.’

He added: ‘To call driven grouse shooting in any way an advantage to conservation is frankly hysterical.’

Police have appealed for help in finding the Golden Eagle. Sergeant Kim Wood, from Police Scotland, said: ‘We would encourage anyone who has information which could help to locate this eagle to contact the Police on 101 or another relevant authority as soon as possible.’

The Golden Eagle has protected status under the Wildlife and Countryside Act 1981 and is classified as an amber-list species under the Birds of Conservation Concern review.

The call by Labour to review grouse shooting threatens to put the party on a collision course with landowners who argue that shooting creates valuable employment opportunities while helping to protect the environment. 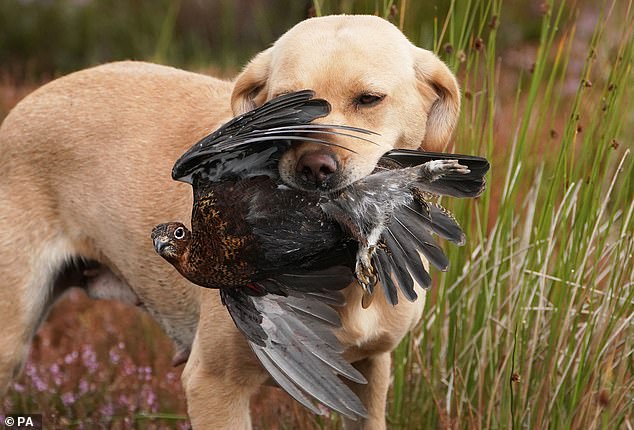 A golden retriever holds a brace of grouse in its mouth on a moor near Ripon, North Yorkshire, on Monday as the season commences 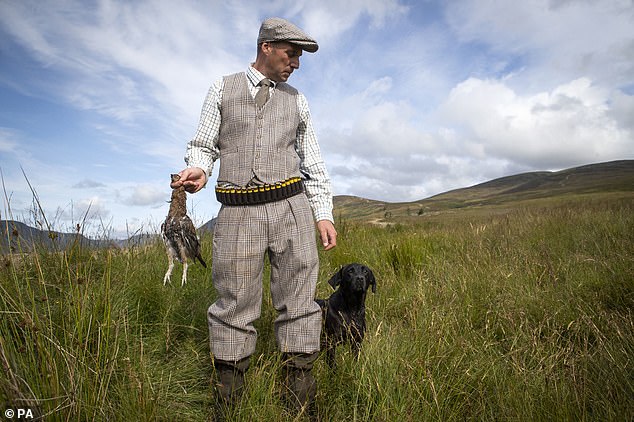 Head keeper Mark Palmer with Paddy the dog at the Rottal Estate in Glen Clova, near Kirriemuir, Angus, Scotland, on the ‘Glorious Twelfth’

Countryside groups have dismissed Labour’s calls for a review of grouse shooting as a ‘thinly veiled political attack’.

Countryside Alliance has said it was ‘extraordinary’ that Labour had launched a ‘thinly veiled political attack on grouse shooting’ during ‘the present political turmoil’.

It added an independent review would be welcomed as it would highlight the benefits of shooting.

Mr Blackmore added: ‘Those with any knowledge of grouse shooting and its associated management will know some of the claims being made by Labour are nonsense. 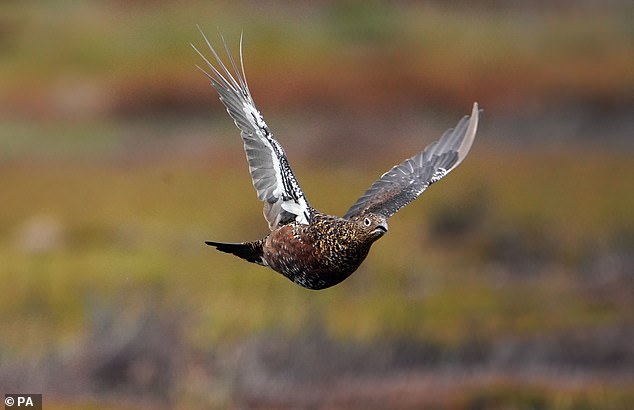 A grouse on a moor near Ripon, North Yorkshire, swoops above the moorland at the start of the shooting season

‘If an independent review would help increase Labour’s understanding of its considerable environmental, economic and social benefits, then it should be welcomed.’

Grouse shooting has been cancelled at Balmoral this year due to a fall in bird numbers.

Shooting grouse is relished by the royal family on their summer holidays at Balmoral but heavy snowfall at the end of last year – followed by a dry and humid start to this summer – has reduced game bird breeding.

An estate source said: ‘Grouse numbers go up and down but this year they have plummeted. 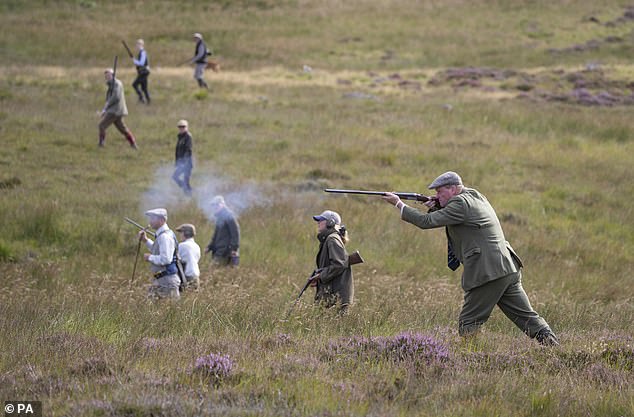 ‘There probably will be no grouse shooting on Balmoral this season. It’s very disappointing.’

Grouse moors cover around 550,000 acres of land in in England and Scotland.

However, Labour said that the process of draining the land in preparation for the shooting season destroyed ‘huge swathes’ of plant life while also killing large numbers of animals.

Moors were often burned, increasing the likelihood of both wildfires and flooding while increasing carbon emissions and dramatically reducing their future capacity to absorb carbon.

At the same time, the party said that species such hen harriers – which feed on grouse chicks – and mountain hares were often illegally culled.

But despite such damage, Labour said that the 10 largest English grouse moors received a total of £3 million in annual farm subsidies.

Shadow environment secretary Sue Hayman said: ‘The costs of grouse shooting on our environment and wildlife needs to be to properly weighed up against the benefit of land owners profiting from shooting parties.

‘For too long the Tories have bent the knee to land owners and it’s our environment and our people who pay the price.

‘There are viable alternatives to grouse shooting such as simulated shooting and wildlife tourism. The time has come for a proper review into the practice.’

However Duncan Thomas, a regional director at the British Association for Shooting and Conservation, said he was confident any review would demonstrate the benefits of a well-run grouse moor.

‘Grouse moors are bio-diverse and the shoots they support create vital employment in isolated rural areas supporting communities,’ he told The Daily Telegraph.

‘Effective heather management including burning and cutting creates amazing habitat and of course reduces the fuel load and risk of wildfire.’

Officials said that protecting the moorland environment was a ‘priority’ for the Government, as was the protection of the hen harrier.

The birds were protected from illegal killing under the Wildlife and Countryside Act and the Government had strong penalties in place for offences committed against birds of prey.

Ministers were said to be continuing to work closely with landowners, tenant farmers and sporting interests to sign up to voluntary agreements, including a commitment to stop the rotational burning of heather on bog land.