Remainer grandee Chris Patten lashed Jacob Rees-Mogg as a ‘caricature’ who eats ‘dogma pie’ in a renewed round of Tory infighting with a year until Brexit.

In return, the Tory darling lashed Remain critics as ‘cave dwellers’ who refused to accept quitting the EU would bring economic benefits.

Mr Rees-Mogg and Lord Patten gave rival speeches in Westminster today as the anniversary of triggering Article 50 on Thursday nears.

Britain will formally leave the EU at 11pm on March 29 next year but political rivals are still clashing over what Brexit will mean.

‘The Brexiteers swallow one slice of dogma pie after another.

‘They are trying to put lipstick on what they used to call a pig – or at least a vassal state.’

He took a swipe at arch-Brexiteer Mr Rees-Mogg. He said: ‘The thing about Jacob is that he is much better than he has allowed himself to seem.

‘It is all very well having those views and being thought to be rather an eccentric but interesting lad when you are eight. But having the same views when you are 48 raises, I think, one or two eyebrows.

‘And, I think, he has allowed himself a bit to be taken over by his own image and caricature.’

He mocked: ‘The ministers who talk about these trade deals have never actually negotiated one… the closest they have come to a trade deal is the checkout at Waitrose.’

Mr Rees-Mogg, chairman of the European Research Group of backbench Tory MPs argued in his own speech that leaving the EU will mean that the UK will be able to control its borders.

Rounding on those who want to reverse the referendum result, he compared them to ‘Mr Hiroo Onoda, the Japanese soldier who finally surrendered in 1974, having previously refused to believe that the Second World War had ended’. 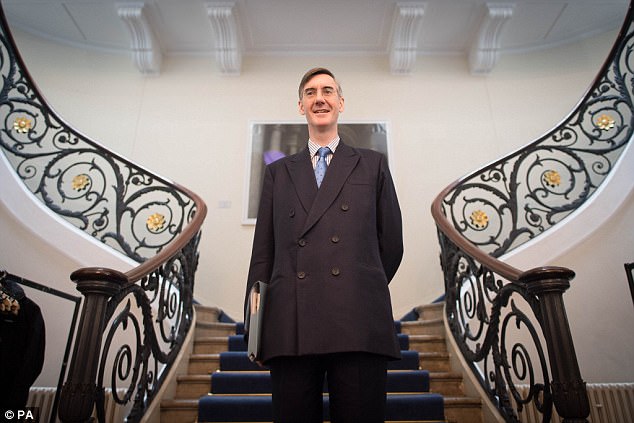 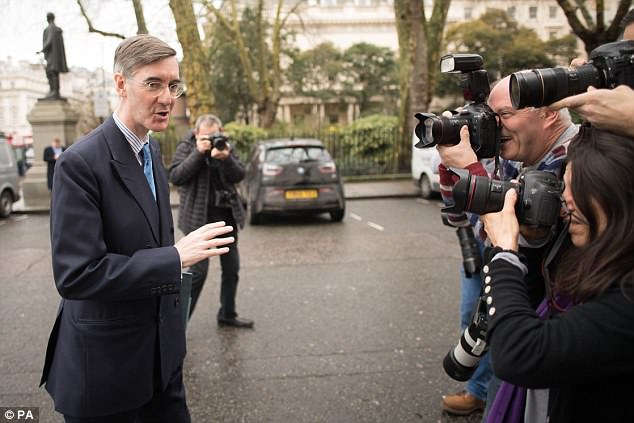 ‘Politicians will no longer be able to evade the blame if things go wrong by saying it was decided elsewhere, they will have to take responsibility for their actions,’ he said.

‘Equally it will not be possible to pretend that if it was not for a remote bureaucracy we would not make mistakes.

‘Power and responsibility go hand-in-hand and will be reconnected once we have left the European Union.’

Britain’s influence in the world will be boosted by taking seats on international bodies that are delegated to the EU such as the World Trade Organisation.

‘This will inevitably give us more influence because we will be there arguing our corner rather than leaving it to an EU representative to have to stand up for us,’ Mr Rees-Mogg said.

‘There is a world of opportunity ahead of us. Economically, leaving the European Union by getting rid of unfair, anti-competitive tariffs and by controlling our borders will help the least well off in society the most.

‘Constitutionally, we will be in charge of our own destiny [and] protected by our own laws. In international affairs, we will be setting our own direction, not hiding behind the skirts of the German chancellor.’