It is not often you see a full back to full back goal. In fact, Wednesday night was the first time Trent Alexander-Arnold had assisted Andy Robertson in a match.

That moment, which saw Liverpool take a 2-0 lead at Anfield, summed up the importance and fearlessness of this full back duo.

Alexander-Arnold and Robertson are two of the best in Europe and essential to the Jurgen Klopp style of play. They push high up the pitch. They add to the attack. If you allow them time and space in those wide areas, they will hurt you.

That is what RB Salzburg discovered in the first half here. In the 25th minute, Alexander-Arnold made one of his countless runs down the right wing.

He crossed the ball and Robertson buried it into the back of the net for 2-0. It was a striker’s finish from the Scot.

At first, you’re thinking, ‘What on earth is the left back doing in that position?’ Scoring is the answer.

He started the move then, rather than retreating, made a smart run into the box to finish it. That was Liverpool at their very best. 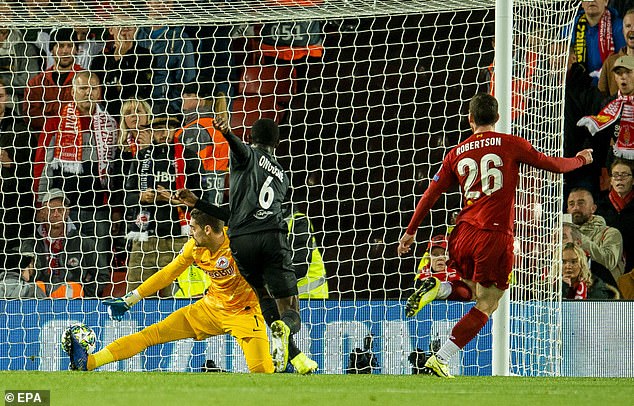 Yet I’ve never seen Klopp’s side in recent times as rattled as they were in the second half. Salzburg were fearless in bringing it back from 3-0 to 3-3. They are such a gung-ho side – one scoring for fun in Austria.

They came to Anfield to get goals, and they almost caused an almighty upset.

Credit to them for that and credit to Liverpool for bouncing back in the way they did, with Mohamed Salah grabbing the all-important winner.