Chrissy Teigen has spoken out to defend Alison Roman for a second time, after the food writer was suspended by the New York Times in the wake of a bitter feud sparked by comments she made about the model’s success.

Mother-of-two Teigen, 34, hit out at the New York Times’ decision to pull Roman’s column, insisting that she ‘doesn’t agree’ with the move — and that doesn’t believe anyone should be ‘canceled for having an honest opinion.’

‘I very publicly forgave Alison and that was real,’ the Sports Illustrated model wrote in a tweet.

Hitting back: Chrissy Teigen has slammed the New York Times’ decision to suspend food writer Alison Roman after she bashed the model’s success in the food industry 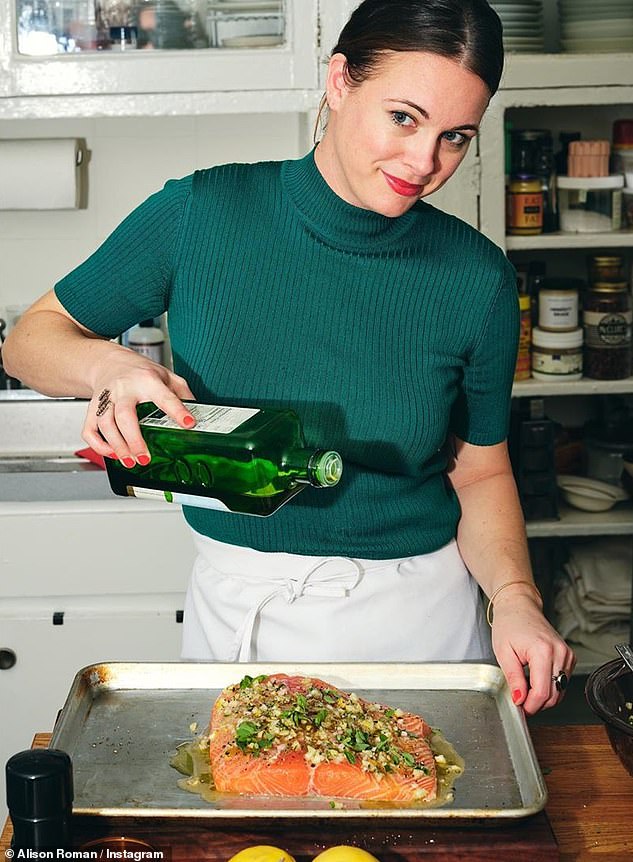 Hiatus: Roman, 34, was suspended earlier this week after referring to Teigen’s food empire as ‘a content farm’ in a controversial interview 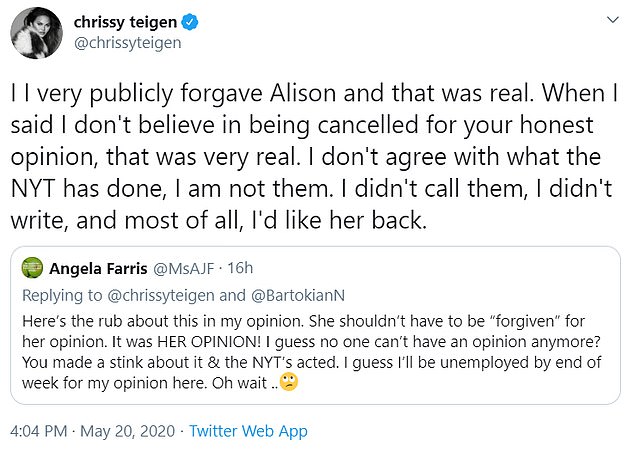 Speaking out: Teigen, 34, hit back at suggestions that she had anything to do with Roman’s suspension, and insisted she ‘would like her back’

‘When I said I don’t believe in being cancelled for your honest opinion, that was very real. I don’t agree with what the NYT has done, I am not them.’

Teigen went on to insist that she had no part in 34-year-old Roman’s suspension, and would like to see her reinstated.

‘I didn’t call them, I didn’t write, and most of all, I’d like her back,’ she concluded.

The tweet marks the second time that the recipe book author has defended Roman in the wake of her suspension, with Teigen previously stating that she is ‘not happy with the NYT leave’.

‘I hope we can laugh about it one day,’ she tweeted in response to a fan who asked if her ‘beef’ with Roman was over.

‘But I’m not happy with the NYT leave so she def can’t laugh about it yet. It just sucks in every way.’

Roman’s suspension was first made public on Tuesday, when a spokesperson for the New York Times told the Daily Beast that the writer’s biweekly recipe column had been suspended and that she was on ‘temporary leave’.

The decision came after Roman criticized Teigen and tidying expert Marie Kondo in an interview with New York Consumer, which readers have said was rude at best and racist at worst.

Opinion: This is the second time that Teigen has defended Roman, with the model revealing in an earlier tweet that she is ‘not happy with the NYT leave’ 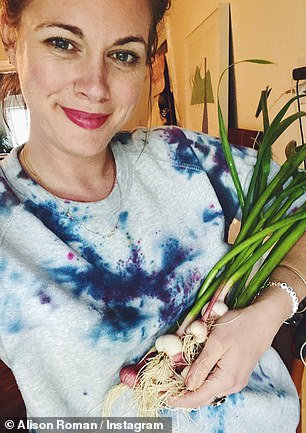 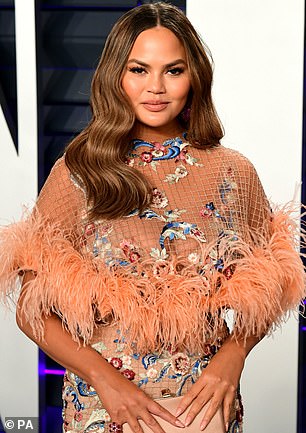 No more details: It’s unclear if Roman’s column will permanently disappear from the Times or come back when the drama has died down

Roman was suspended nearly two weeks after the publication of her interview, in which she she described Teigen’s climb to the top of the food empire as ‘crazy.’

‘She had a successful cookbook. And then it was like: Boom, line at Target. Boom, now she has an Instagram page that has over a million followers where it’s just, like, people running a content farm for her,’ Roman said.

‘That horrifies me and it’s not something that I ever want to do. I don’t aspire to that.’

Unsurprisingly, the backlash against Roman was swift, with social media users slamming the writer, particularly after Chrissy chimed in to express her disappointment.

Roman eventually apologized, but the Times has apparently decided that further action was needed, taking the decision to suspend her and her column in a move that sparked furious debate on social media.

Just like Teigen, many of Roman’s fans rushed to her defense and accused the Times of overreacting — however some critics affirmed that it was the right move.

This has left a bad taste in the mouths of some who have followed the drama, including writer Natalie Shure. 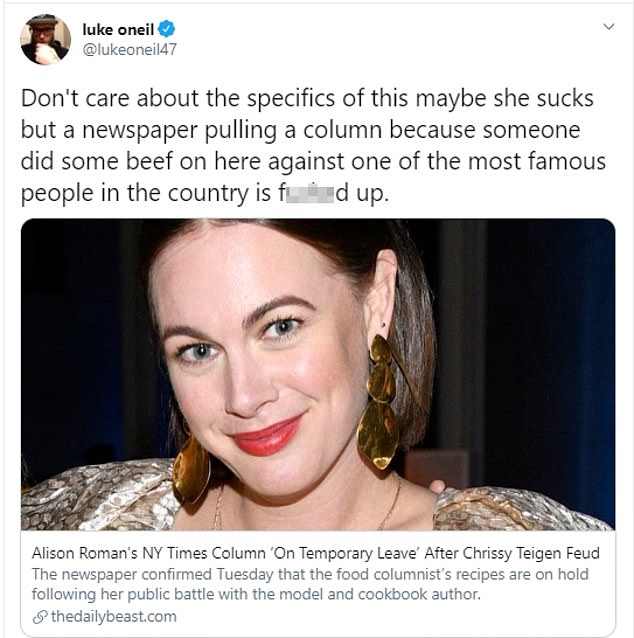 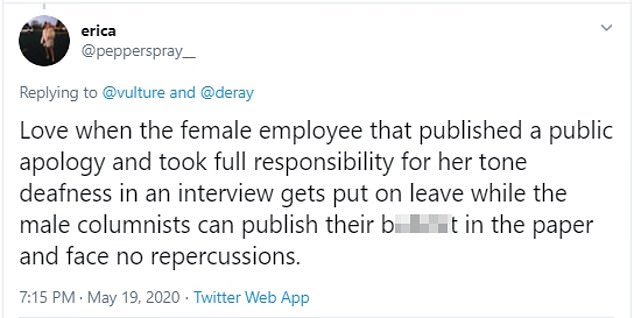 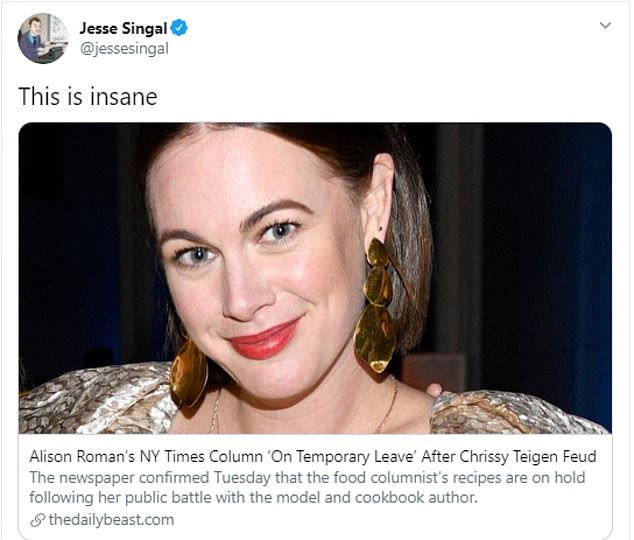 Hey there! Teigen is not the only one to speak out in defense of Roman; her fans also rushed to express disagreement with the Times’ suspension move

‘Honestly, Alison Roman facing professional retaliation for s***-talking multimillionaire celebrities is a labor issue and other NYT writers should condemn it,’ Shure tweeted.

‘To reiterate: what she said was undeniably crappy, and the blowback she got was warranted! but getting canned for it – particularly after an apology that Teigen appeared to have accepted – was too severe, and sets a troubling precedent.’

Writer Luke O’Neil agreed, tweeting: ‘Don’t care about the specifics of this maybe she sucks but a newspaper pulling a column because someone did some beef on here against one of the most famous people in the country is fu***d up.’

‘Love when the female employee that published a public apology and took full responsibility for her tone deafness in an interview gets put on leave while the male columnists can publish their bullshit in the paper and face no repercussions,’ said another fan.

‘Alison Roman even apologized immediately after. Seriously, Cancel Culture is sociopathic. The internet mobs on twitter are just the worst,’ said one more, while another supported called the Times’ decision ‘insane.’

But just as many Twitter users said that the Times made the right call, disagreeing with the premise that Roman was fired for simply ‘s***-talking’ stars.

‘Does every woman of color need to come back AGAIN and re-explain that Alison Roman’s Columbus cuisine column is taking a hit because she went after two women of color and then behaved as she was the victim as is oft the script when white women attack WoC?’ TV writer Liz Hsiao Lan Alper chimed in.

‘Alison Roman has been often criticized for RENAMING ETHNIC DISHES cutesy names like “THE STEW”, refusing to credit the cultures she’s “adapting” the dishes from in favor of claiming creative credit,’ she went on. 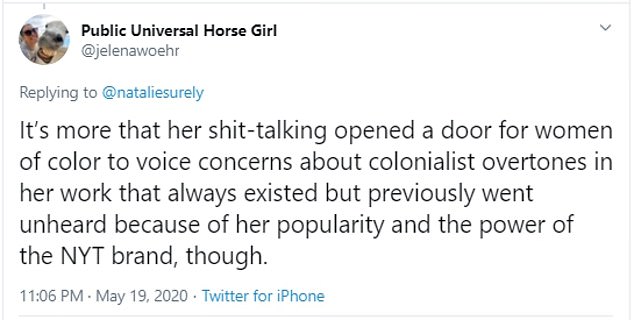 Flip side: But others say that the problem with Roman wasn’t criticizing a celebrity, but picking out two women of color — and they’ve pointed to problems with her column, too

‘This issue resurfaced AGAIN after she was (rightfully) criticized for blasting two women of color for conducting business THE SAME WAY SHE DOES BUSINESS or GOOP does business or any other prominent white chef does business.’

Another person wrote: ‘It’s more that her s***-talking opened a door for women of color to voice concerns about colonialist overtones in her work that always existed but previously went unheard because of her popularity and the power of the NYT brand, though.’

‘She went after women of color, not “multimillionaire celebrities,” said Alisha Grauso. ‘It was gross she went after successful women at all, no matter who they were. She said something stupid and petty about the producer of HER OWN SHOW and now she’s paying the price. There’s nothing to condemn.’

After Roman’s first remarks were published, Teigen immediately expressed hurt at Roman’s comments in a series of tweets.

‘I bought [Roman’s] cookbooks, supported her on social and praised her in interviews. I even signed on to executive produce the very show she talks about doing in this article,’ she shared.

‘I genuinely loved everything about Alison. Was jealous she got to have a book with food on the cover instead of a face!! I’ve made countless NYT recipes she’s created, posting along the way,’ she went on.

‘I didn’t “sell out” by making my dreams come true. To have a cookware line, to get to be a part of that process start to finish, to see something go from sketch to in my hands, I love that.’

Chrissy explained that ‘to see [her cookbooks] being used by people around the world makes [her] so happy.’ 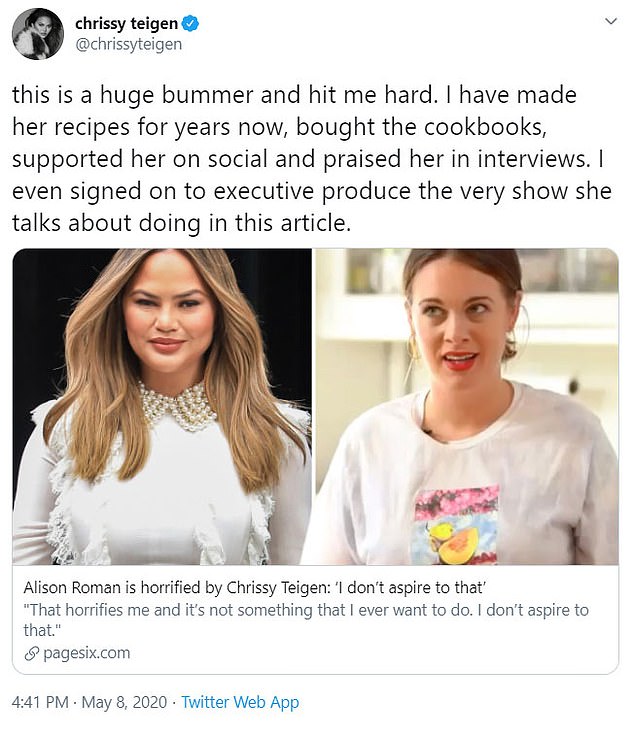 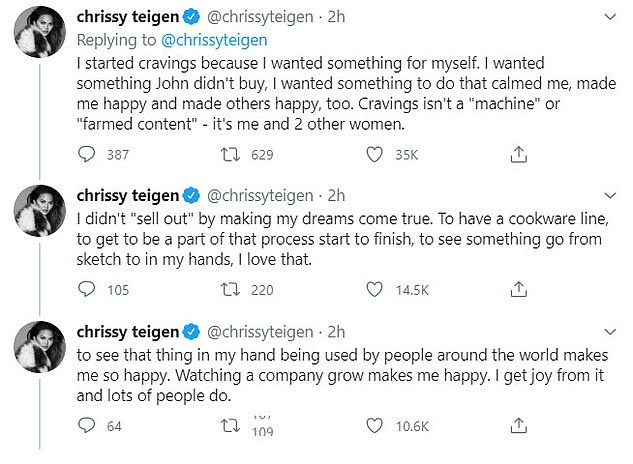 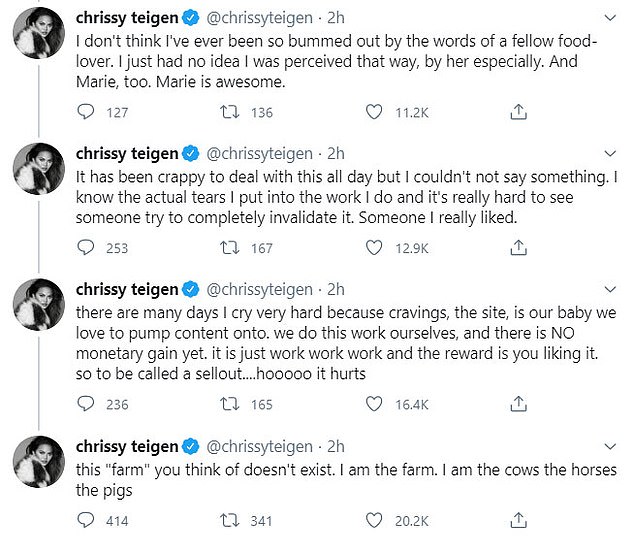 Speaking her truth: The criticism may have ‘hit [her] hard,’ but Teigen pressed on and explained that she ‘started cravings because [she] wanted something for [herself]’

She admitted that though it had ‘been crappy to deal with this all day,’ she ‘couldn’t not say something’ in response to Roman’s assumptions.

‘I know the actual tears I put into the work I do and it’s really hard to see someone try to completely invalidate it. Someone I really liked,’ lamented Teigen.

‘I cry very hard because Cravings, the site, is our baby we love to pump content onto. we do this work ourselves, and there is NO monetary gain yet. it is just work work work and the reward is you liking it. so to be called a sellout….hooooo it hurts!

‘This “farm” you think of doesn’t exist. I am the farm. I am the cows the horses the pigs.’

‘I sent an email but also wanted to say here that I’m genuinely sorry I caused you pain with what I said,’ she began.

‘I shouldn’t have used you /your business (or Marie’s!) as an example to show what I wanted for my own career- it was flippant, careless and I’m so sorry.’

In an indirect tweet, the Bon Appetit magazine columnist insisted that ‘being a woman who takes down other women is absolutely not [her] thing.’

‘And don’t think it’s yours, either (I obviously failed to effectively communicate that). I hope we can meet one day, I think we’d probably get along,’ she concluded.

Clarification: She said she was ‘trying to clarify that [her] business model does not include a product line’ 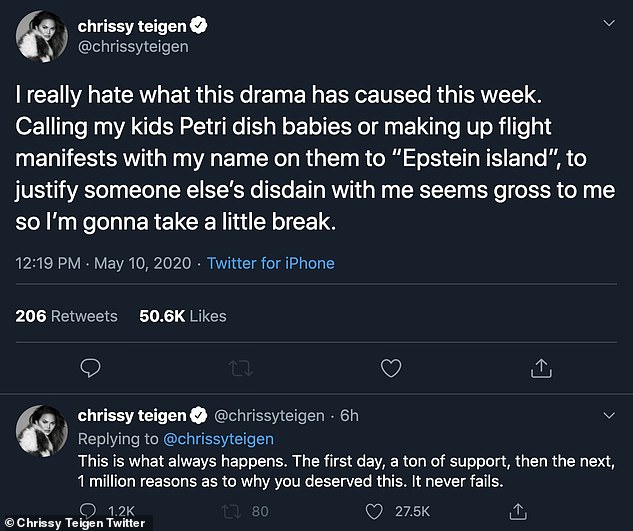 Done: Teigen took a break from Twitter, saying that while she had lots of support, cruel commenters also made horrible remarks like calling her kids ‘Petri dish babies’

As the internet continued to discuss the drama, it all became too much for Teigen.

‘I really hate what this drama has caused this week. Calling my kids Petri dish babies or making up flight manifests with my name on them to “Epstein island”, to justify someone else’s disdain with me seems gross to me so I’m gonna take a little break,’ she wrote.

‘This is what always happens. The first day, a ton of support, then the next, 1 million reasons as to why you deserved this. It never fails.’

She made her account protected, so that only existing followers could see her tweets, and future followers would need to be approved by her.

‘I’ve thought a lot this weekend about my interview and the things I said,’ the 34-year-old wrote. ‘I know this is a lengthy note (succinctness has never been my strong suit). I appreciate you taking the time to read.’

In the extended note, Roman said, ‘I need to formally apologize to Chrissy Teigen and Marie Kondo’ after using ‘their names disparagingly to try and distinguish myself, which I absolutely do not have an excuse for.’

The culinary author called her words ‘stupid, careless and insensitive’ and admitted she need to make changes in her personal conduct moving forward. 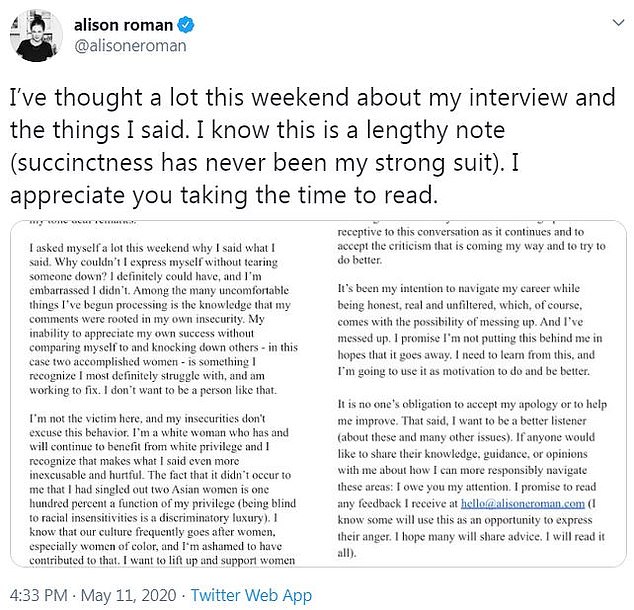 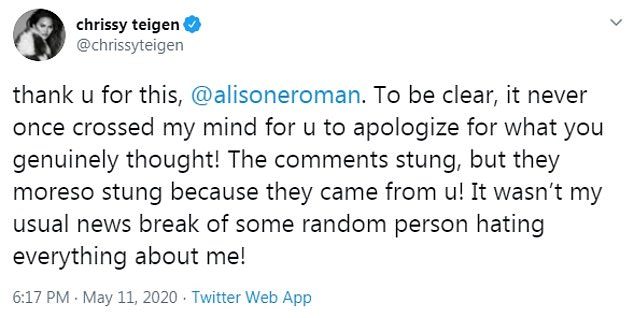 Response: Teigen graciously accepted the apology and explained that she actually didn’t expect it and was just ‘stung’ that she thought such things

Props: She also praised Kondo for keeping out of the messy back-and-forth 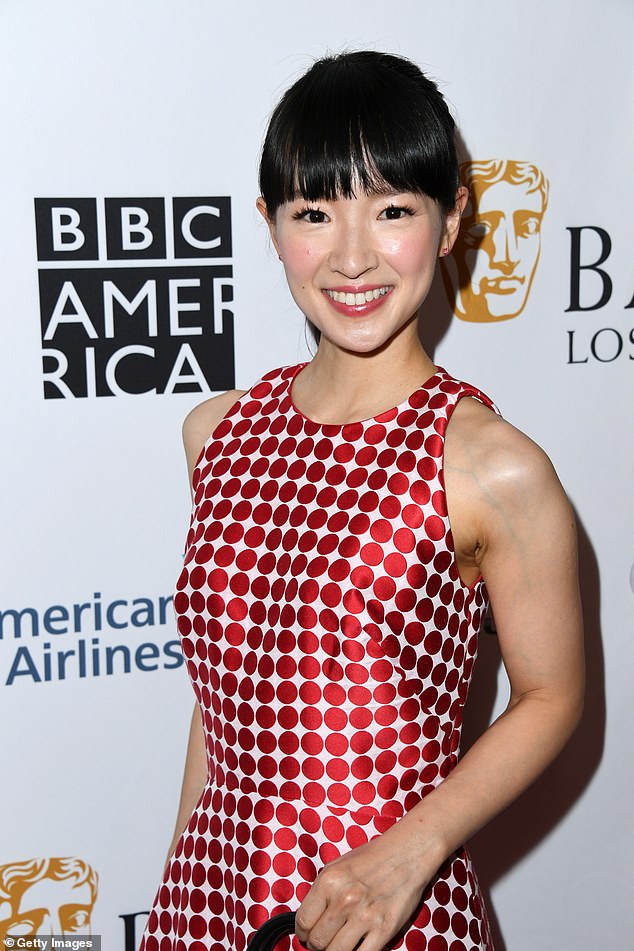 ‘I need to learn, and respect, the difference between being unfiltered vs. being uneducated and flippant,’ Roman said. ‘The burden is not on them (or anyone else) to teach me, and I’m deeply sorry that my learning came at Chrissy and Marie’s expense.’

She said that her remarks were ‘rooted in my [her] insecurity’ with a tinge of jealousy, to boot.

‘My inability to appreciate my own success without comparing myself and knocking others down – in this case two accomplished women – is something I recognize I most definitely struggle with… I don’t want to be a person like that,’ she said.

She said that she was ignorant in exhibiting ‘white privilege’ as she ‘singled out two Asian women,’ adding that ‘being blind to racial insensitivities is a discriminatory luxury.’

‘I know that our culture frequently goes after women, especially women of color, and I’m ashamed to have contributed to that.’

Teigen thanked Roman for the apology, saying that she thinks she’s ‘incredibly talented’ and respects her credentials in the culinary world.

‘The comments stung, but they moreso stung because they came from u!’ Teigen wrote. ‘It wasn’t my usual news break of some random person hating everything about me!’