On Friday, she enjoyed a surprise baby shower attended by a few members of her family and her closest celebrity friends.

And one day following the celebration, Chrissy Teigen took to Instagram to share two group shots of all her invited guests.

The model revealed in the heartwarming caption that she was tricked into attending her own baby shower, which was hosted by Kris Jenner.

All of them: On Saturday Chrissy Teigen, 32,  took to Instagram to share two group shots from her surprise baby shower that happened one day earlier

‘I am crazy super anti baby showers for myself. Opening gifts in front of people makes me want to die,’ confessed the star.

‘Receiving gifts makes me very uncomfortable because i feel blessed to the max already and I really hate writing thank you cards with my poor penmanship. But people I love trick me with dinner invites and they happen.

‘Thank you to all friends on both coasts, for knowing me exactly. A mellow night of dinner. Cake. And love. That is all I could ever want for a perfect night. ❤️❤️❤️’

‘thank you insanely generous @krisjenner for opening up your home and getting me every carrot cake in the city and @jenatkinhair for knowing exactly how to lure me out of my home and exactly how to make me happy. ALL LOVE!’ 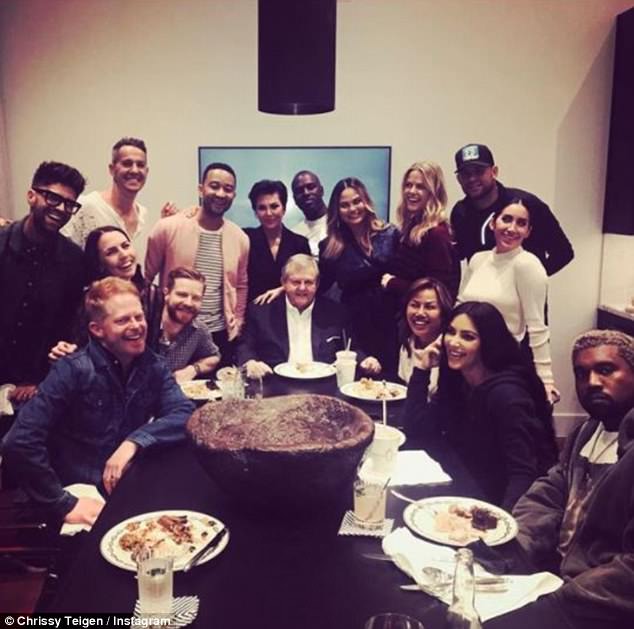 ‘Thank you to all friends on both coasts, for knowing me exactly’: Alongside the shots, the model shared a heartwarming message of thanks to her loved ones

The star followed up with a second snap that featured Andy Roddick and Brooklyn Decker.

‘BROOKLYN DECKER AND ANDY RODDICK LADIES AND GENTLEMAN. PROUD TO CALL THESE TWO FRIENDS NO MATTER WHAT COMMERCIALS OR MOVIES THEY SIGN ON TO OR WHERE THEY LIVE OR HOW THEY CHOOSE TO DRESS ETC @brooklyndecker @andyroddick,’ she joked. 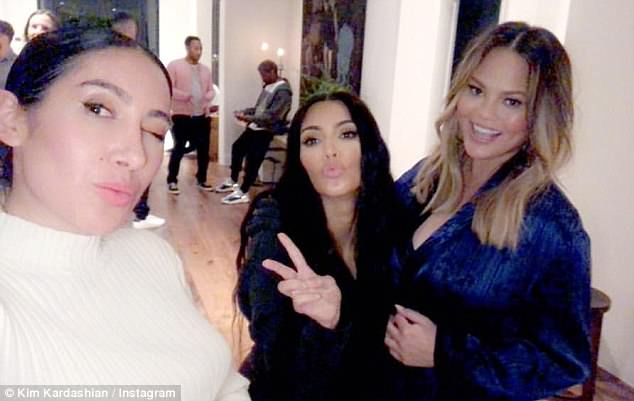 Party: On Friday, Chrissy, celebrated the impending arrival of her baby boy, with a shower attended by her closest pals. Jen Atin and Kim Kardashian, 37, are pictured 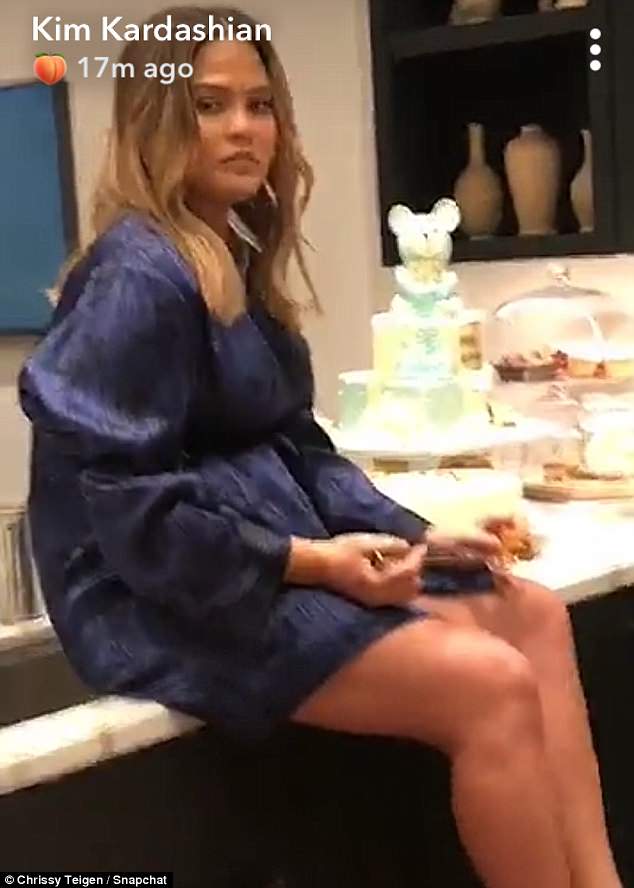 No judgement: As the party guests enjoyed themselves with dancing, the mother-of-three zeroed in on pal Chrissy, who was sitting by herself chowing down on cheesecake 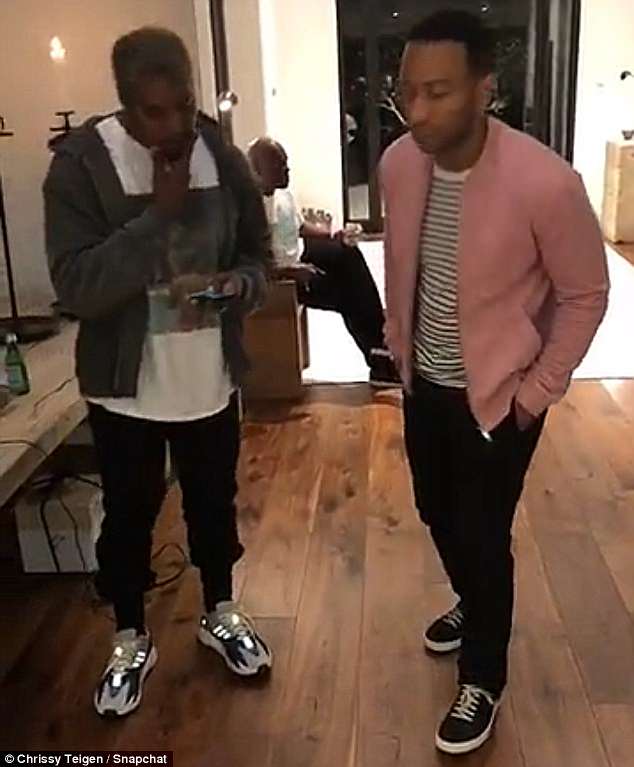 It’s all good: The men joined Kanye West, 40, and John Legend, 39, who recently reunited after some Twitter drama, in a dance party

During the night, Kim took to Snapchat to document the festivities.

As the party guests enjoyed themselves with dancing, the mother-of-three zeroed in on pal Chrissy, who was sitting by herself chowing down on cheesecake.

The reality star teased that her model friend ate it all by herself.

Guests of the evening enjoyed multiple layer cakes, yet did not appear to eat any but the cheesecake.

The festive treats, decorated in white and baby blue, played off of John Legend’s name, with messages such as ‘You’re a legend,’ a legend in the making,’ I am a legend,’ and ‘legendary’ written across. 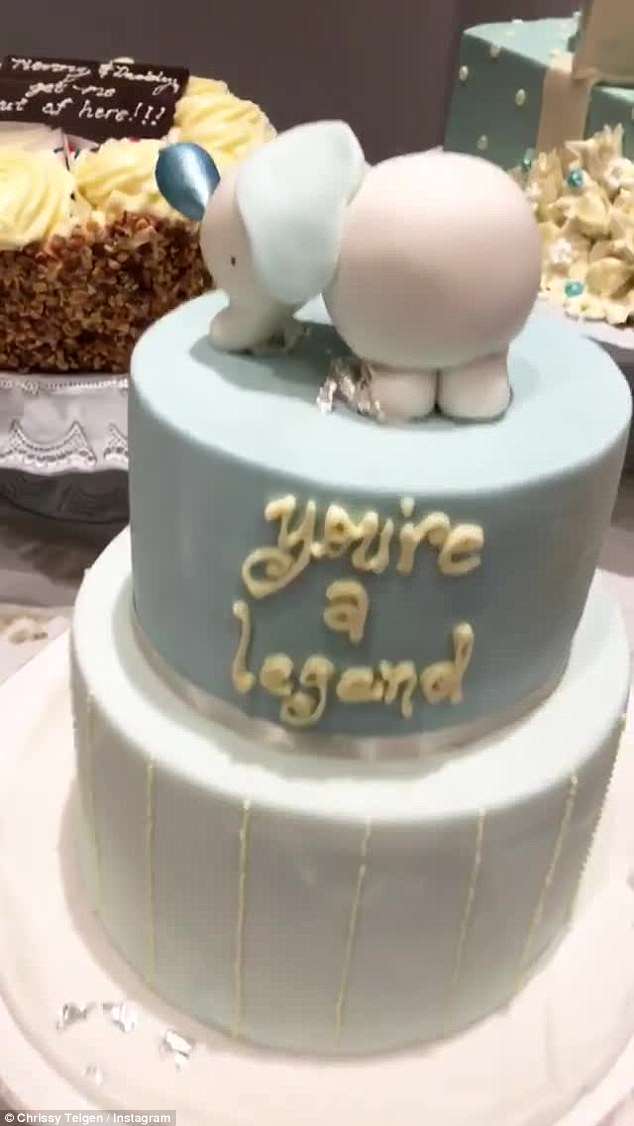 One of many: Guests of the evening enjoyed multiple layer cakes, yet did not appear to eat any but the cheesecake 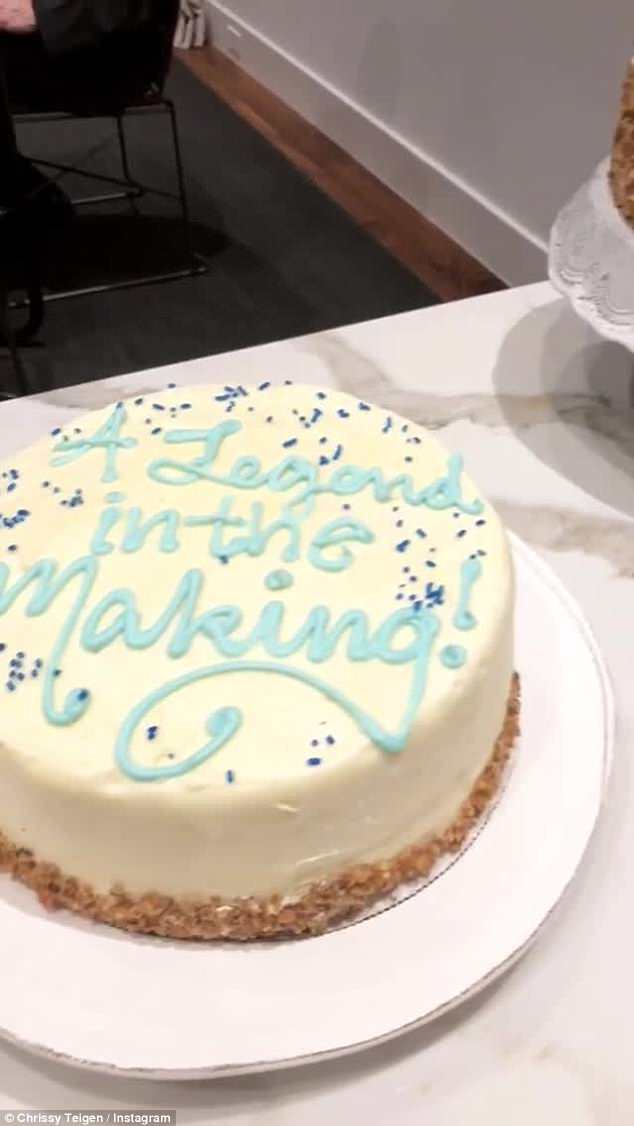 ‘A Legend in the making!’: The festive treats, decorated in white and baby blue, played off of John Legend’s name 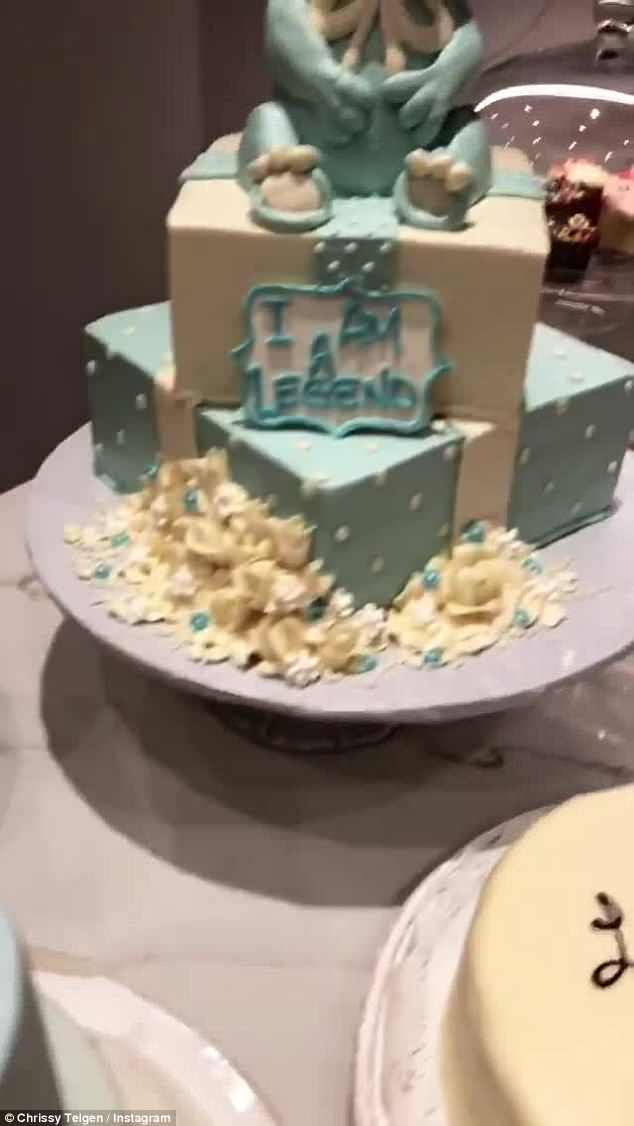 Creative: Messages such as ‘You’re a legend,’ a legend in the making,’ I am a legend,’ and ‘legendary’ were written across

During a recent interview with Page Six, Chrissy and John, who are parents to Luna, two, spoke of their little one’s understanding of siblinghood.

‘She knows just as much as she knew eight months ago, which is nothing. So it’s going to be a surprise,’ said Chrissy.

‘She knows to call it a ‘baby,’ but I don’t know if she [can] clarify what that really means to her yet,’ added John.

The couple are concerned that their daughter will struggle with ‘sharing the spotlight’ with her new brother.

‘Luna’s gonna be an issue. I think she’ll probably have some growing pains because she’s currently running the house right now. She’s used to being the center of everything right now so we’ll see how she adjusts to sharing the spotlight.’ 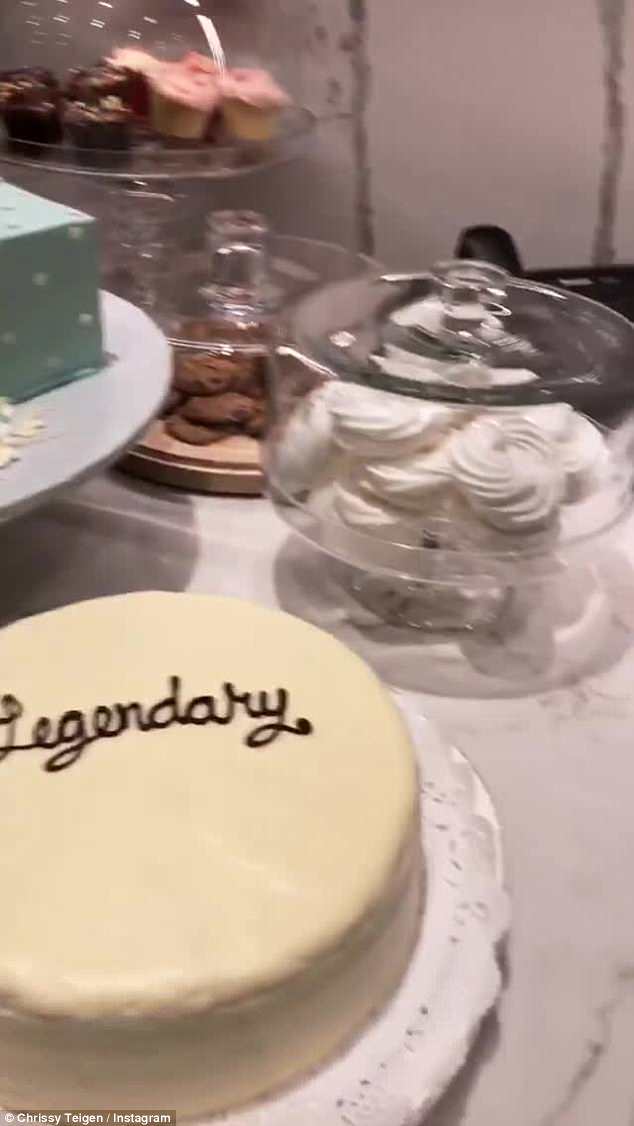 But wait, there’s more! In addition to full size desserts, guests could choose from a collection of individual treats