A Christian primary school teacher has infuriated a crowd of protesters at a Black Lives Matter rally by wearing a ‘Make America Great Again’ cap.

Ethan Aloiai was among thousands of people who snaked throughout Auckland’s central streets for Monday’s protest, organised in the aftermath of the death of George Floyd at the hands of a white police officer in Minneapolis, US, last month.

The sight of the pro-Trump hat sparked anger among the protesters, who accused the teacher of being a ‘racist’ and antagonising the crowd.

Aloiai later posted a video to Facebook in which he defended his actions before sharing footage of his interactions with the protesters.

‘I hate racism,’ he begins.

‘I decry every form of racism, ethnic superiority, all of it. It’s abominable to God and personally, I have no toleration for racism.’

But he argued his MAGA hat was not racist. 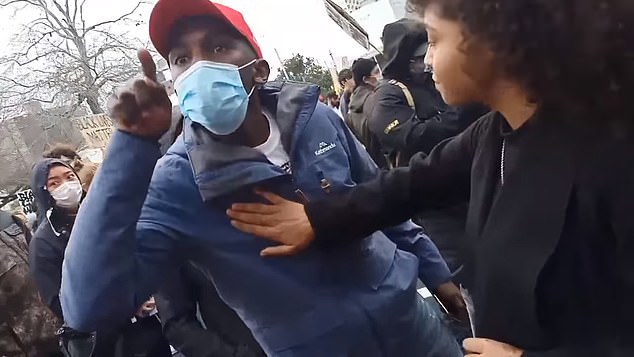 The video clip ends with footage taken at the march, with dozens of protesters telling Aloiai to ‘take the hat off’.

‘Its antagonising because that hat stands for racism and you know it,’ one protester tells him.

Another protester, who says he attends the same church as the teacher, urges the man to remove the cap.

‘You’re a Christian, take that down,’ he says.

The MAGA hat, which bears Donald Trump’s 2016 campaign slogan, has been used by Far Right movements in the United States. 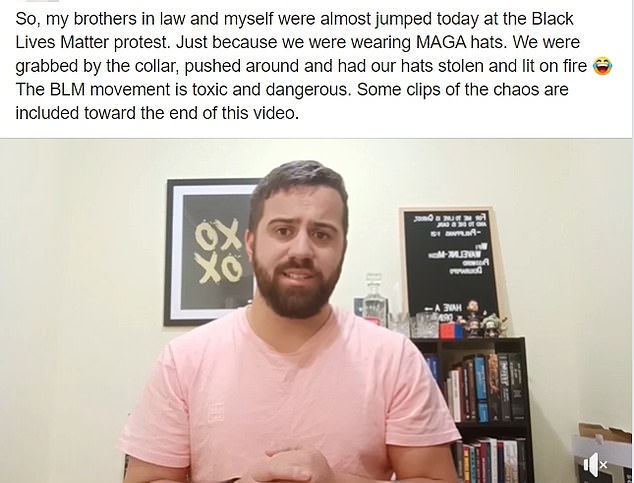 Ethan Aloiai (pictured) later posted a video to Facebook defending his decision to wear the hat, arguing it was not racist

Many commentators accused Aloiai of deliberately wearing the controversial political symbol to provoke the crowd.

‘You went there to provoke protesters. What did you want to gain? You pushed for the reaction you received,’ one person wrote.

‘You were standing there with your friend laughing and giggling about when people would notice your hats and how people would react,’ another woman added.

Manukau Christian School is now managing complaints from parents concerned about Aloiai’s behaviour and has since shutdown its Facebook page.

Principal Pete Slaney has reportedly said the the school does not condone racism and incident is being handled internally.

In the video, Aloiai said he opposed the BLM movement heading to the march, but he felt further justified in his views once he faced hostility due to his hat.

The teacher said he and his brother-in-law, who was also wearing a MAGA hat, were ‘very lucky not to get jumped’ at the march.

‘I was attacked, I had my hat stolen from me. I was grabbed by the collar, pushed around and [we] had our hats stolen and lit on fire.’ 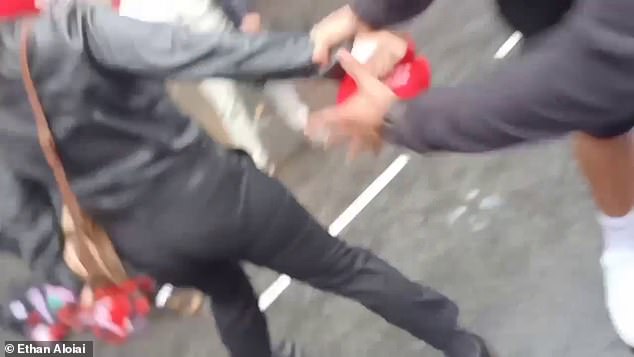 Two days later Aloiai issued a Facebook post apologising for his actions, saying the hat  ‘does not mean to me what it means to many others’, and it has also been worn by ‘many prominent black figures’ such as Kanye West and Candice Owens.

‘I understand that to some people the hat represented a symbol of white supremacy and my wearing of it provoked them in unhelpful ways,’ he wrote.

‘I am sorry that this is the communication that was received by many, and I am sorry for the hurt it caused.

It comes as the United States enters its seventh night of widespread outrage, with thousands of people protesting George Floyd’s death in cities across the country.

The 46-year-old died on May 25th when a police officer knelt on his neck for nine minutes during an arrest, after a service station attendant accused the black man of paying for cigarettes with a counterfeit $20 bill.

US President Donald Trump has vowed to use military action to end the anger-fuelled protests, which have erupted into chaotic scenes of buildings and cars being set on fire.

Black Lives Matter protests have since emerged across the globe, with marches also held in France, Australia and New Zealand. 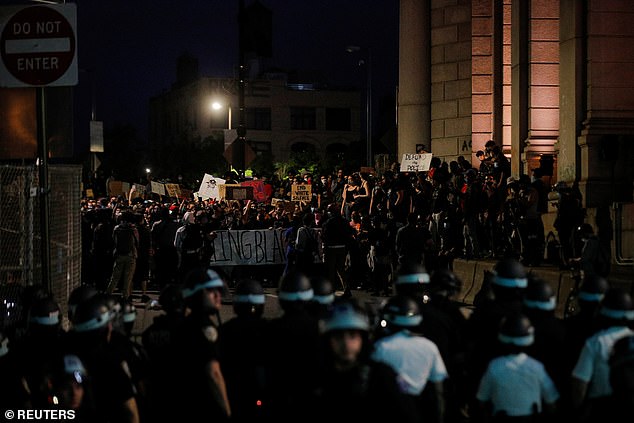 Protests have sparked across the US following the death of George Floyd, 46, at the hands of a white police officer in Minneapolis on May 25.  Demonstrators are pictured blocking the base of the Manhattan bridge after curfew during a protest in the Manhattan borough of New York City, U.S., June 2, 2020