An experimental skin spray has cured a mother-of-three of the flesh-eating bacterial infection nearly killed her earlier this year.

Christin Lipinksi, 37, has spent the last three months fighting for her life since she developed necrotizing fasciitis as a complication of the flu in January and had to have one-third of her skin cut away to stop the bacteria’s spread.

After 10 surgeries, Christin had lost too much skin for doctors to use any more as grafts to cover the wound, so they appealed to the FDA for compassionate use of an unapproved, experimental treatment.

A week after the skin spray was applied, Christin’s doctors say that her wound is 95 percent healed, and they expect that she will be home with her family in a couple of weeks.

What started as a nasty case of the flu and a tiny rash in Christin’s armpit quickly became a nightmare scenario for her, her husband, Nate, and their three children.

Christin, a physical education teacher, was diagnosed with the flu on January 11.

At home in Scottsdale, Arizona, she briefly improved and then took a turn for the worse. As her flu symptoms intensified, her armpit became very painful, and Nat called an ambulance to take her to the nearest trauma department.

Doctors at Maricopa Integrated Health System in Arizona diagnosed Christin with necrotizing fasciitis and moved quickly to get her into surgery.

The infection – which can be caused by a number of bacteria, but is most commonly a result of group A strep – spreads rapidly and causes the cells in connective tissues that sit between muscles, nerves fat and blood vessels, as well as the skin.

Many who get the infection lose their limbs to it, and it proves deadly for about one quarter of sufferers. 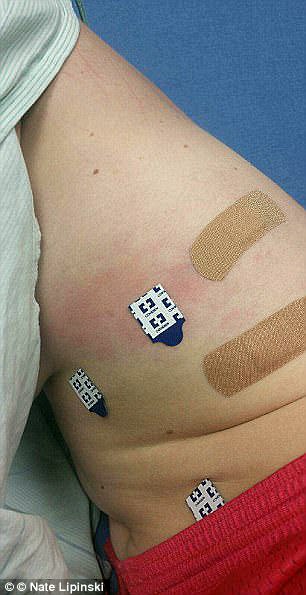 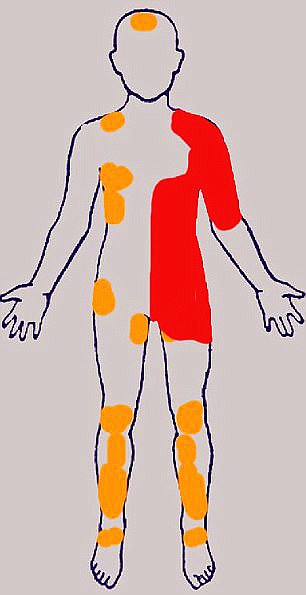 To keep the infection from spreading further across Christin’s body or into deeper tissues, her medical team had to remove 30 percent of her skin, stretching from her shoulder to the top of her thigh on her left side, as well as in several places on both legs, torso and the top of her head.

After her last operation in January, her husband told Daily Mail Online that the infection had not reached Christin’s muscles, so she would not lose any limbs and ‘the prognosis is still good.’

‘She’s young and healthy and her body has responded well. [But] we’re not done yet, there’s a chance it could still resurge,’ Nate said.

His wife would recover, but she would need continued treatment and physical therapy to help her walk and function normally again.

Chrstin had to be kept heavily sedated in the intensive care while he wounds healed, but once they were, she faced another set of challenges.

Typically, a necrotizing fasciitis survivor would undergo a series of skin grafts to replace the lost tissue.

But her medical team was afraid that Christin couldn’t afford to lose any more skin, and they would have needed to take large patches.

They were faced with few alternatives, so they made a hail Mary application to the Food and Drug Administration, begging to use a new skin spray, called ReCell, that the agency had not yet approved for clinical use.

The agency gave Christin’s doctors permission to try the spray under its ‘compassionate use’ option, which allows an unapproved treatment to be used on a patient who is running out of options. After surgery to remove the infected tissue, Kristin is recovering, and learning to walk again with the help of physical therapy 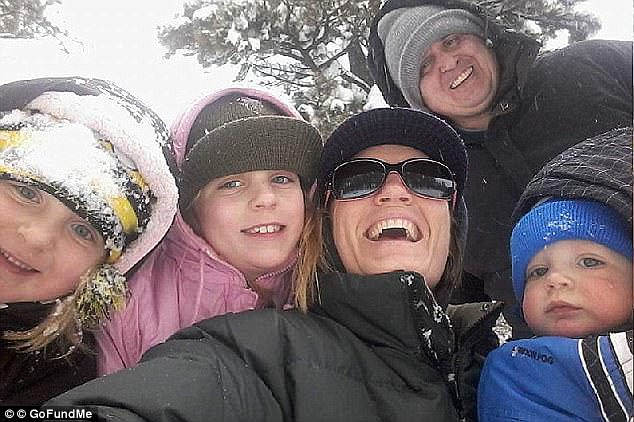 The spray, manufactured by the biotech company Avita Medical, uses an enzyme to break down a small sample of healthy skin from the patient’s skin into component cells.

This is combined with healing factors that promote the growth of new skin and sprayed onto the affected area.

‘Normally, a wound heals from the edges, which takes time, but this allows it to heal everywhere at once,’ Michael Perry from Avita told the New Scientist.

Doctors used the spray along with a piece of skin they’d taken from Christin’s thigh got treat her wounds, beginning at the end of February.

A week later, they started removing the dressings, and were happily floored by what they say.

The area they had treated was 95 percent healed, other than some minor inflammation that they expect to calm down, the skin looked good.

Dr Kevin Foster, who treated Christin, told the New Scientist that these results were much better than he would have expected to see from the graft alone, and he thinks ‘the spray made a real difference.’

Christin is due to be discharged from the hospital in two weeks or so.