Actress Christina Applegate has revealed that she had both her ovaries and fallopian tubes removed to decrease her chance of developing ovarian cancer.

Applegate, 45, was diagnosed with breast cancer nine years ago, and she had a double mastectomy to treat it. The same year she was diagnosed, her cousin was killed by ovarian cancer.

Since the star, who has a six-year-old daughter, is BRCA positive, which means a person is more likely to develop ovarian and breast cancers, she decided to have another procedure to decrease her chances of dying from cancer.

Applegate told NBC that taking control of the situation and getting the procedure provided her with a sense of relief.

Christina Applegate had her ovaries and fallopian tubes removed to keep from developing ovarian cancer, which her cousin died from in 2008. Applegate is pictured here at a cancer benefit event in August

There are three types of tumors that can result in ovarian cancer.

Epithelial tumors: About 90 percent of ovarian cancer cases stem from these tumors, which originate in the tissue that covers the outside of the ovaries.

Stromal tumors: These account for about seven percent of ovarian tumors. They are found in the tissue that contains cells that produce hormones and are usually detected earlier than the other two types of tumors.

Germ cell tumors: These originate in egg-producing cells and, while rare, tend to be found in younger women.

The fact that her daughter, Sadie, is likely BRCA positive weighs on Applegate, she told NBC. She said: ‘The chances that my daughter is BRCA positive are very high. I look at her and feed her the cleanest foods.’

She added: ‘I’m doing everything I can on my end knowing that in 20 years, she’ll have to start getting tested. Hopefully by then there will be advancements.’

Applegate also shared that she visits her oncologist every six months and that she eats only organic foods. She does this to reduce the amount of pesticides, fertilizers and other harmful chemicals she puts in her body, as this has been shown to reduce one’s chances of developing cancer.

‘We grow our own vegetables. We’re a 100 percent organic house. My daughter is a vegetarian and practically vegan. That’s her choice,’ Applegate said.

The procedure that she had done is called a salpingo-oophorectomy, and it is designed to remove a woman’s ovaries and fallopian tubes at once. 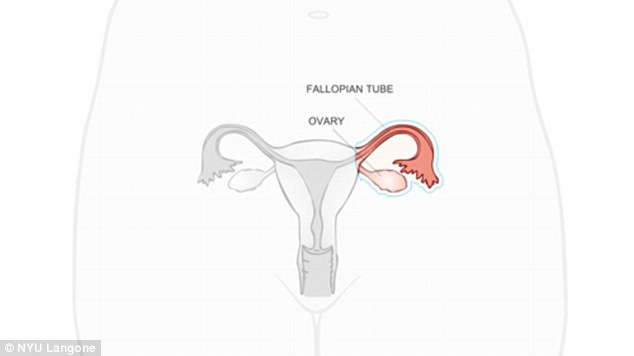 The procedure that Applegate received is called a salpino-oophorectomy

The surgery decreases women’s chances of developing both breast and ovarian cancer, which is the fifth deadliest cancer for women and kills more women than any other gynecologic cancer.

Ovaries are organs that sit on either side of a woman’s uterus, and they contain eggs and regulate the production of hormones controlling their menstrual cycles. Fallopian tubes are what eggs travel through to get from ovaries to the uterus.

When a woman decides to have both removed to prevent a cancer diagnosis, the organs are typically taken out at the same time because they share a common blood supply.

Applegate’s recent operation is performed one of two ways: through an abdominal incision that is six to 12 inches long or laparoscopically, which requires three to five incisions that are about one to one-and-a-half inches long.

The outpatient laparoscopic version of the operation is the most common, according to Ohio State University professor of gynecology Dr David Cohn.

He said that the main thing women who choose to have the operation need to be aware of is the fact that the surgery will induce menopause since their ovaries will be removed.

While recovering from either form of the surgery, women might experience pain and they should not lift anything more than 10 pounds for a couple of weeks, Dr Cohn said.

Additionally, following the procedure, a woman will not be able to conceive. 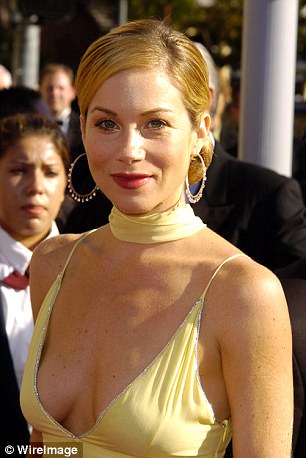 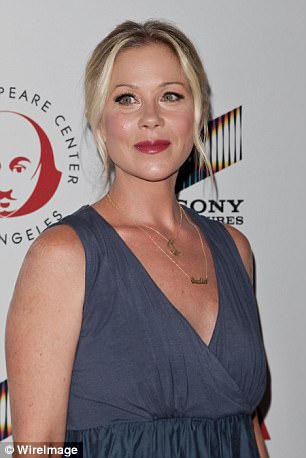 Christina Applegate was diagnosed with breast cancer in 2008. Here she is pictured before and after her double mastectomy surgery in 2004 (left) and last year (right)

Dr Leigha Senter-Jamieson, who is an associate professor of human genetics at Ohio State, said that doctors try to make sure that women who are considering the surgery have accepted the fact that they will no longer be able to have children.

She added that some women elect to have their eggs frozen prior to the surgery and that the patients she sees who are thinking about having the operation do not make the decision lightly.

Dr Senter-Jamieson explained that an average woman’s chance of developing ovarian cancer is about one-and-a-half percent, but a BRCA positive woman has a 20 to 40 percent chance, which makes the procedure worth it for many of them.

‘Once we explain the high likelihood, there’s a feeling of helplessness,’ she said. ‘[The surgery] is one of the few tools they can put in their toolbox.’

The feeling of relief that Applegate described experiencing after her operation is not uncommon among patients who choose to have the surgery, according to Dr Senter-Jamieson. ‘You feel like you’ve put yourself in a position of power,’ she said.

Certain women have higher chances of developing ovarian cancer than others, including middle-aged women, women who have previously had breast or colon cancer – such as Applegate –  and some women who have trouble getting pregnant.

Additionally, some research suggests that women who take estrogen without also taking progesterone for more than 10 years have higher chances of developing ovarian cancer.

While no definite ways of preventing ovarian cancer are known, the CDC has said that women who take birth control pills for more than five years, have given birth, have breastfed or have had their tubes tied have lower chances.