A revolting Christmas Day menu of seal cutlets and turtle soup reveals what men on board a British Antarctic expedition feared they would have to eat during their journey.

The mocked-up list of culinary delights such as penguin patties and roast reindeer shows the sailors led by famed explorer Sir Ernest Shackleton believed they were in for quite exotic meal as they headed to the South Pole.

It was discovered 110 years after their mission in which they endured bone-chilling conditions and were starved of food to become the first men to reach the South Pole.

To keep up their spirits the team made a menu of dubious-sounding fare they were meant to have indulged in for a celebratory meal.

Antarctic explorers (left) Ernest Shackleton, Robert Falcon Scott (centre) and Edward Wilson (right) at the start of a sledging trip during the earlier Discovery Expedition, circa 1903 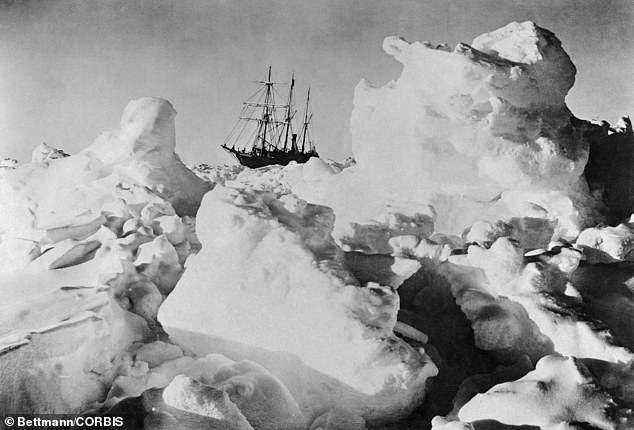 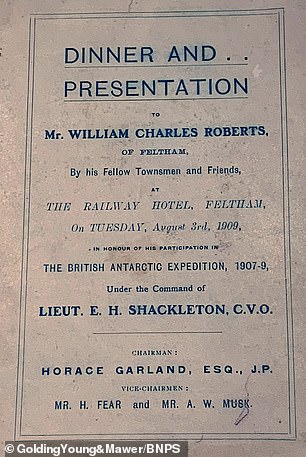 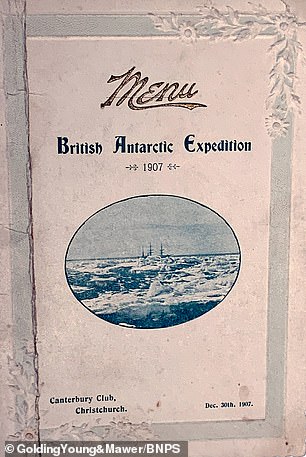 A celebratory dinner and presentation held for William Roberts in the town of Feltham (left). The mock menu of penguin patties and seal cutlets made by the the men of the British Antarctic Expedition

For starters they were to tuck into turtle soup followed by an entree of penguin patties and seal cutlets.

The main meal was to be a joint of roast reindeer, black currant jelly, potatoes and green peas and then plum pudding and mince pies for afters.

Copious amounts of whisky, Champagne and cigars were also on the menu with sledges rather than carriages at 12.30am.

While the menu appears to be tongue-in-cheek, it carried an element of truth as it was that sort of fresh meat the men would have eaten later on in the expedition, which lasted from 1907 to 1909.

The menu forms part of a never-before-seen archive of documents and photos kept by William Charles Roberts, who was the cook and assistant zoologist on the Nimrod Expedition.

The archive includes a rare and original contract signed by Shackleton for Roberts’ services on the expedition to the ‘Antarctic Zone’.

There is also a menu card signed by Shackleton and other team members for a celebratory lunch held in his honour for being knighted by King George V in 1909. 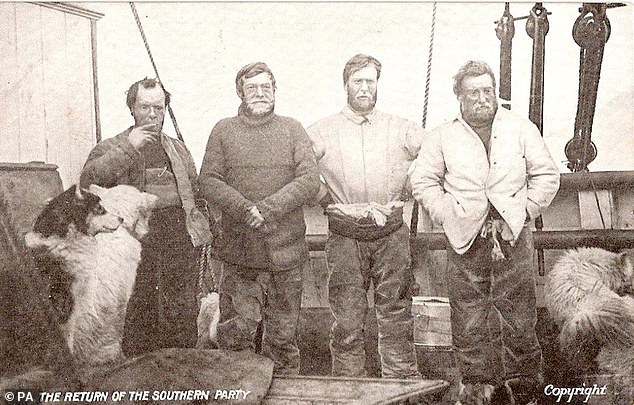 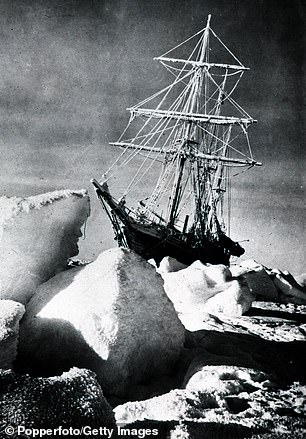 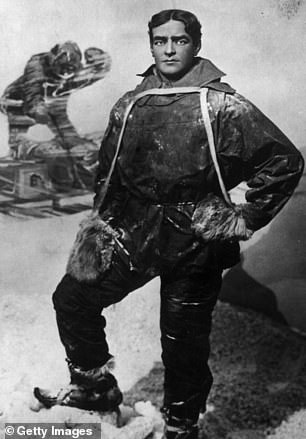 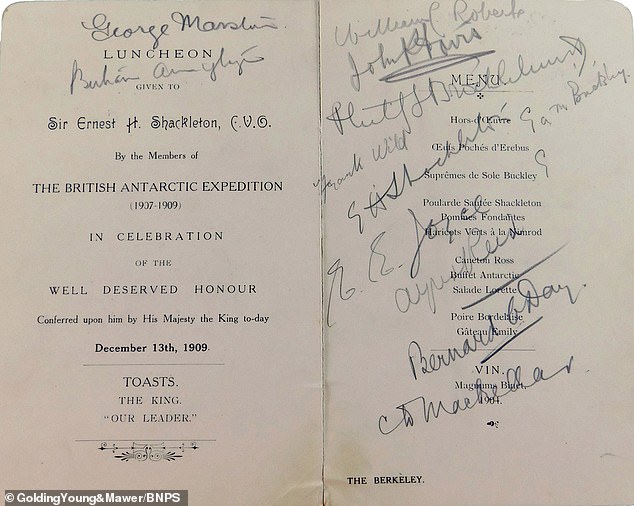 Sir Ernest Shackleton’s expeditions to cross the ice of Antarctica

Born in County Kildare, Ireland, his first experience of the polar regions was as third officer on Captain Scott’s Discovery expedition from 1901 to 1904.

He had to leave the voyage early for health reasons after the group set a new southern record by marching to latitude 82°S.

During the second expedition on board the Nimrod, between 1907 to 1909, he and three companions established a new record Farthest South latitude at 88°S – 97 geographical miles from the South Pole.

Shackleton returned in 1914 on board the Endurance and became trapped in the ice to travel from sea to sea via the the South Pole.

After being rescued during the ill-fated trip, he later went back again in 1921 but died of a heart attack while his ship was moored in South Georgia.

And there is also a menu card for another dinner held in honour of Roberts by dignitaries in his home town of Feltham, west London.

The archive has been held by the Roberts family ever since and is now coming up for sale with auctioneers Golding Young and Mawar of Lincolnshore for a total estimate of £15,000.

Alastair McPhie-Meiklejon, of the auction house, said: ‘William Roberts was the cook on the expedition and this is a collection of all his ephemera relating to that voyage. It has never been seen before.

‘It was as if he got back from the expedition, did a few dinners and talks and then put hot all in a suitcase and left it for 100 years.

‘I don’t know why the menu was produced. It appears to be a bit of fun but the irony is that this was the kind of food they would have been eating when things went wrong for them.

‘They were certainly on Antartica at the time of this meal and I would have thought those things would have been fresh.

‘But an entire course dedicated to coffee and cigars is something that is quiet British. 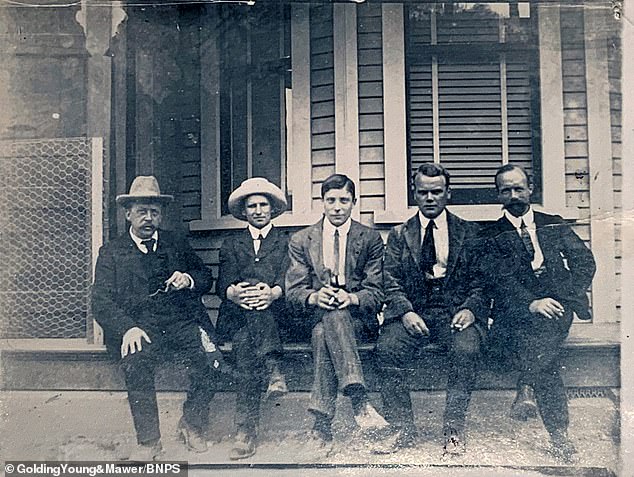 Members of the Antarctic expedition, including the cook William Roberts (far left) before they set off on their mission to the South Pole 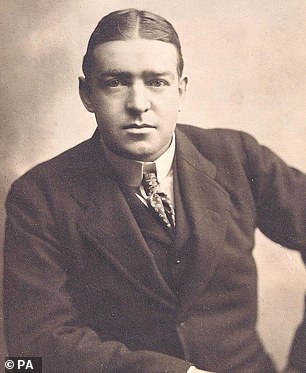 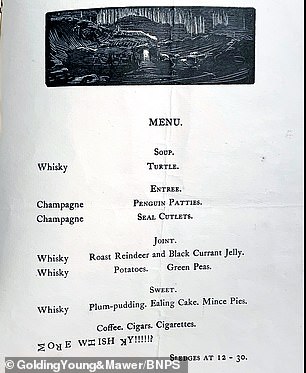 Sir Ernest Shackleton’s men made the mock Christmas Day menu with turtle soup and penguin patties, not knowing thy would have to eat similar meat later on in their voyage 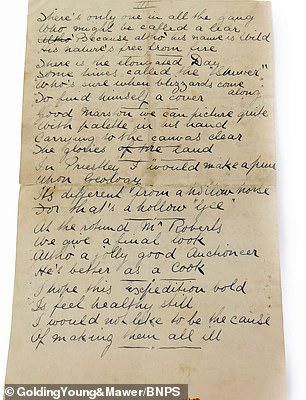 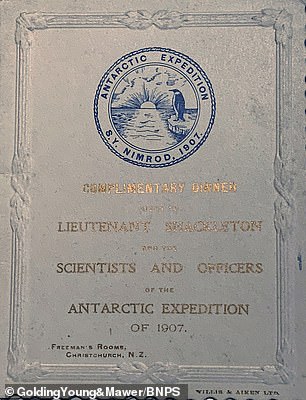 Anonymous poems (left) which were written on board the ship, Endurance, as they travelle on their expedition to the South Pole

‘I believe it is the most important collection of ephemera belonging to a team member of this expedition to have ever been found.

The Nimrod Expedition was regarded as a glorious failure as the party did not reach their objective but did travel farther south than anyone else had achieved. 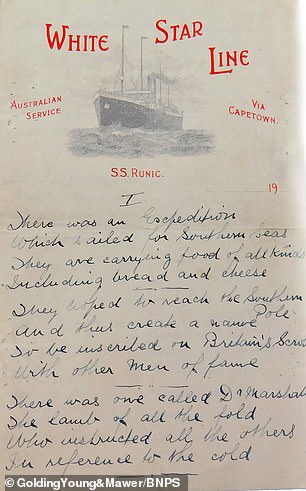 On their return across the frozen continent the endured snow blindness, sunburn and frostbite and almost ran out of food.

They also carried out a great number of important experiments and up their return to Britain they were hailed as heroes.

A black and white photo in the archive was taken of five of the men, including Scott, after their safely arrived back in New Zealand.

And two poems on White Star Line headed notepaper written by an anonymous expedition members are also in the collection.

The poems relate to the voyage and certain members of the party and were written while on board the SS Runic, the liner that took them south to New Zealand from where they switched to the Nimrod.

Three years after the Nimrod Expedition, Captain Robert Falcon Scott led the ill-fated Terra Nova Expedition to the South Pole only to find they had been beaten to it by Norwegian explorer Roald Amjundsen.

On their return journey, Scott and his four comrades all died from a combination of exhaustion, starvation and extreme cold.

Shackleton returned to the Antarctic in 1914 to attempt to cross from sea to sea via the pole.

But disaster struck the expedition when its ship, Endurance, became trapped in ice and was slowly crushed before the landing crews could land in around 1908.

The crew escaped by camping on the sea ice until it disintegrated and made their way to the island of South Georgia.

The Roberts archive is being sold on January 3.