A West Tennessee town has canceled its annual Christmas parade after a proposed LGBTQ float with a rainbow flag led to threats of violence.

Dwight Tittle, 47, a careers adviser from Troy, came up with the idea of the float based on the Bible 1 John 4:7-8 which says ‘let us love one another for love is God.’

He planned to include a ‘love is love’ flag which featured hands raised over a rainbow background.

However, the inclusion of the pride-themed flag led to outrage by some residents who deemed the float specifically LGBTQ and suggested throwing tomatoes at the people on board.

Mr Tittle defending his idea, telling the Jackson Sun: ‘All that says is we’re just to love everybody.

The town announced on Monday via Facebook that the parade, scheduled for December 14, would be canceled due to ‘continued scheduling conflicts’.

People were quick to comment on the post and accused the organizers of canceling the event due to the float.

Aleasha Geurts van Kessel said: ‘Shame on this city for cancelling over something so inclusive.’ 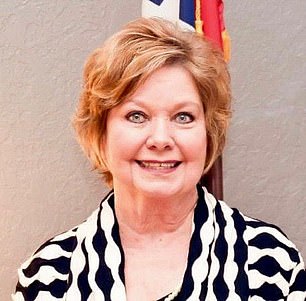 Abby Bell added on the post: ‘All of the people here threatening to throw things and being mean and hateful, I pray for you.’

Mayor Deanna Chappell said the event relies on volunteers who would not be available on the proposed date.

However Mayor Chappell said there is potential for the parade to be reorganized.

She said: ‘We have had a lot of interest from citizens wanting to find solutions for our parade issues.

‘Several of the ideas brought to light are showing promise, and we are actively working to come up with a plan to make a parade happen,’ she told the Jackson Sun.

Mr Tittle came up with the idea for the float after joking to his wife he waned to buy an antique tractor to feature in the parade.

His wife asked him what the float was about to which he replied: ‘Let’s just tell everybody we love them.’

He said Troy has had a Christmas parade for as long as he can remember, with it only being moved due to weather.

Mr Tittle, whose son is openly gay, said his office had received hateful phone messages in response to the proposed float.

On December 5 Mr Tittle’s float will feature in the Union City Christmas Parade, which lies ten miles northeast of Troy.

He said the parade organizer called him to discuss the float and said: ‘I see no problem, and we welcome you guys’