Christopher Robin review: A film of only very limited charm

Winnie-the-Pooh once described himself as ‘a bear of very little brain’, which, as fans of all ages will know, was both typically self-effacing and patently untrue. After all, how could the inventor of Poohsticks, vanquisher of heffalumps and most loyal friend of Christopher Robin possibly be dismissed as of very little brain.

That said, you don’t need much brain to see that Walt Disney’s latest take on the group of friends who live in and around Hundred Acre Wood is, alas, a film of only very limited charm. It starts out with the best of intentions, promising that it has been inspired by the characters created by AA Milne and the illustrator EH Shepard, but what comes across, first and foremost, is the influence of Disney itself. 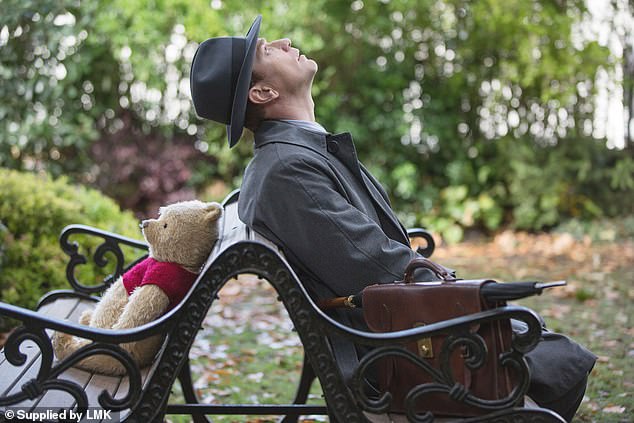 Which perhaps is not surprising given that the company first bought a licence for Milne’s characters almost 60 years ago and has produced well over 20 feature films and television series in the decades since, many of them much loved. Christopher Robin, however – on no account to be confused with last year’s wonderful grown-up drama Goodbye Christopher Robin – feels like a mis-step, where creative decisions that have proved both successful, and lucrative, in the past result in less happy outcomes now.

Presumably inspired by the success of the recent Paddington films, Christopher Robin is a mix of live action and visual effects, albeit with Pooh represented here as a walking, talking teddy bear rather than the friendly, hat-raising but essentially ‘real’ bear that is Paddington.

On more than one occasion I found myself thinking that this mix of the real and the animated was exactly the sort of film that Mary Poppins’ creator, PL Travers, so desperately tried to prevent Walt Disney from making. Alas, AA Milne has been dead for 60 years and is in no position to be so protective. 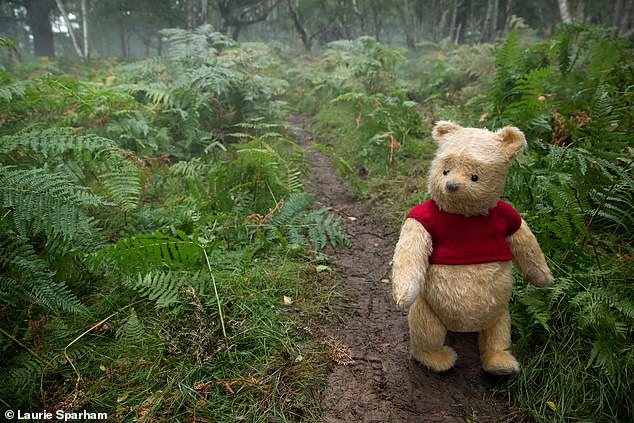 Pooh is represented as a walking, talking teddy bear, unlike the ‘real’ bear in the recent Paddington films

The story is a slightly strange one, beginning with the Alice-in-Wonderland-style tea party held for Pooh and friends to say goodbye to Christopher Robin, who is off to boarding school. Then it jumps forward 30 years to a post-war London where Christopher Robin – by now married, with a daughter, and played by Ewan McGregor – is trying to hold down his dull job at a struggling luggage company.

Cuts must be made, insists his boss, new strategies drawn up, and if that means Christopher Robin cancelling a long-planned family weekend in the country, so be it. His wife (Hayley Atwell) is furious, his daughter (Bronte Carmichael) inconsolable. 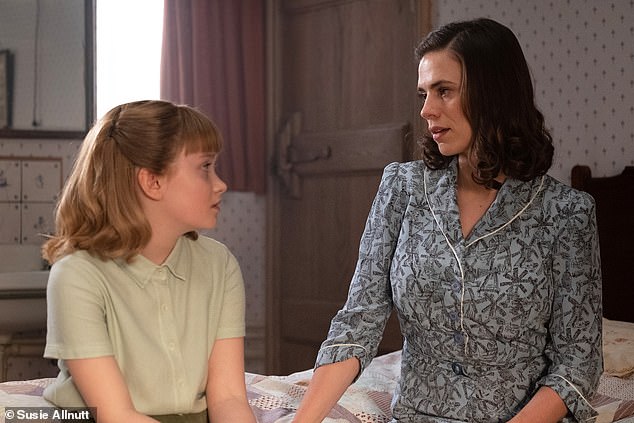 Christopher’s wife (right, Hayley Atwell) and daughter (left, Bronte Carmichael) are furious when the pressure of work leads Christopher threatening to cancel a weekend away

Christopher Robin is a man who is getting his priorities all wrong – putting career before family, a cardinal Disney sin – so guess who comes to perch behind him as he sits gloomily in a leafy London square. Yes, it’s his old childhood friend, Pooh, who has travelled through some kind of tree portal.

And here a new problem arises – the voices. Pooh is still being voiced by Jim Cummings, an American actor who has lent his thin, reedy tones to the character for 30 years. At a time when Ben Whishaw has given us a near definitive voice of Paddington, having the thoroughly British Pooh voiced by a quivery 65-year-old American seems more wrong than ever.

Eeyore, voiced by Brad Garrett, and Tigger, voiced by Cummings again, also have American accents. An opportunity to reboot the franchise, to return Pooh and Co to their authentic British roots, goes begging. Which is a shame. 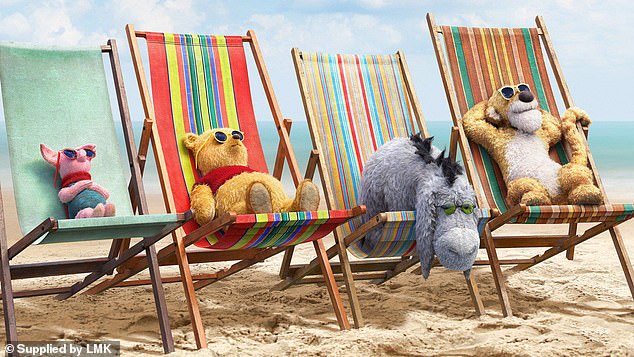 German director Marc Forster explored similar ground with Finding Neverland, about JM Barrie 14 years ago, but while he certainly delivers some knockabout fun here, he never really gives us any lasting magic.

The visual effects are fine – as you’d expect – but the camerawork has some odd moments, and McGregor and Atwell are no better than so-so. And while the young target audience may still enjoy jokes about honey and bounding Tiggers, their parents may not.

The next film from the great 12 Years A Slave director Steve McQueen will apparently be based on the Eighties television crime drama Widows. Which would be extraordinary but for the fact that Denzel Washington is now starring in the second, multi-million-dollar Hollywood film to be based on another TV thriller series from the same era, The Equalizer. Alas, we can only hope McQueen fares better because The Equalizer 2 is no improvement on the 2014 movie.

Washington continues in the role of Robert McCall, the former CIA man and part-time avenging angel. If he finds a wrong, you just know he’s going to put it right, so when someone murders one of his few friends, we know exactly where we are heading. 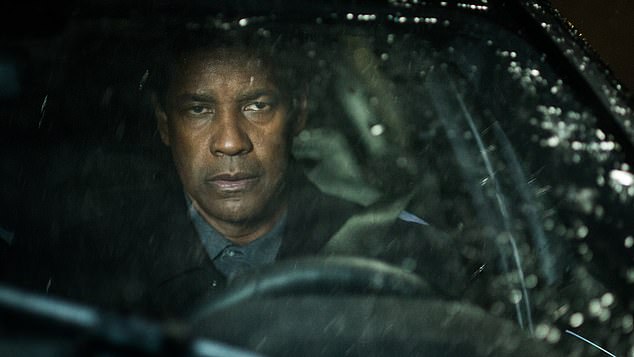 Denzel Washington plays the role of former CIA agent Robert McCall, but his performance fails to hit the mark in this violent and action-packed movie

What I’d forgotten is how unpleasantly violent it all is, although lines such as, ‘I’m going to kill each and everyone of you; the only disappointment is that I only get to do it once’ do provide a clue.

Washington is 63 now, which is getting on a bit for an action hero and he’s not on top form here but if you’re in the mood for something with a mounting body count and a western-style shoot-out… be my guest. 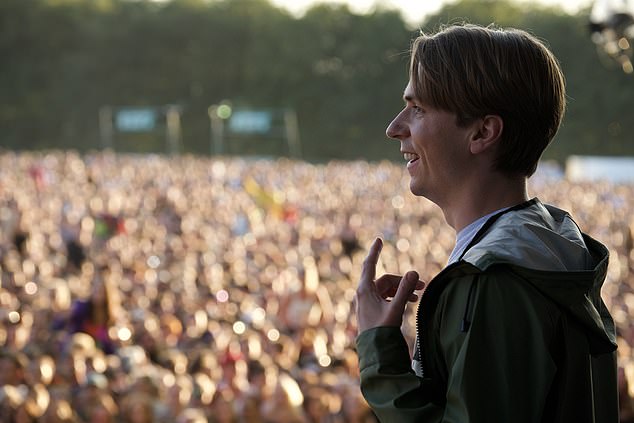 Joe Thomas (above) leads a well-chosen cast in The Festival; a film based on the hilarity of the mad and bad experiences which two friends share while at a popular music festival

These days music festival-goers can be anything from eight to 80 but The Festival is aimed squarely at the 15-25-year-olds who grew up with The Inbetweeners on TV and continue to find that mix of bodily functions, recreational drugs and excruciating social embarrassment involving either nudity, dancing or declarations of love extremely funny. Which let’s face it, they often are.

Production values aren’t high but with Inbetweeners star Joe Thomas leading a well-chosen cast there is fun to be had amid the mud, madness and drugged-up Smurfs.